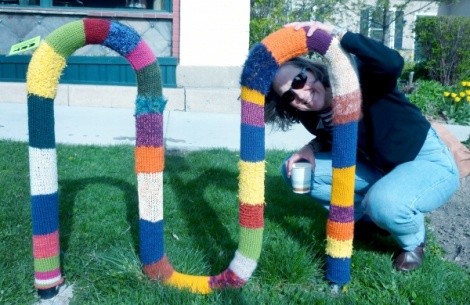 Lisa Sewell, a knitter and executive director of the Utah Arts Festival, is one of the organizers of the June 18 Random Acts of Art: Yarn Bombing installation at Washington Square. City Weekly caught up with Sewell to get the lowdown on the installation, which will continue through the arts festival, June 23-26.


Why yarn bombs?
Because life is too serious. It is an opportunity for people to look at the ordinary in different ways, and it makes people smile. I installed one on the bike rack at Jack Mormon Coffee [pictured, 82 E St., Salt Lake City] and even when I drive by it, I glance over and see it, and it just makes me smile. I’ve heard a couple people say it is just so unexpected to see an ordinary object turned into a piece of art. It gives people rushing around a chance to stop and go, “Whoa, what was that?”

How did yarn bombing evolve in Salt Lake City?
When we put it on our website and started collecting names, we sent out an e-mail and had no clue how many people would show up to our first knit-in. Worst case scenario, me, Sheryl and Ellen Christensen, who is also involved in the project, would get to sit and knit for three hours. Fifty people showed up. And they were all super excited.


Do businesses approve or do you “bomb” in the dead of night?
We have a group that has been knitting at the Coffee Garden [898 E. 900 South] for years every Friday morning. I just asked Alan [Hebertson], “Hey, could I put something on your tree?” He said, “Sure, go for it.” We ask permission from people. For the bike rack [at Jack Mormon Coffee] I went over and asked, and he was all excited about it. The thing with yarn bombing is it’s temporary because we cut it off when we’re done. There isn’t any harm done to meters [or other structures] with the installation of a yarn bomb.

How can people get involved?
We are going to have one final knit-in at the Downtown Farmers Market on June 11. It will be an opportunity for would-be yarn bombers to come out and add to what we are doing. The June 18 installation happens to coincide with Worldwide Knit in Public Day, so we’re hosting a knit-in that day as well. Our plan is to find a tree and work on a project from 1 p.m. until 4 p.m.

What can people expect during the Arts Festival installation?
The footprint we are trying to focus on is Washington Square and the circle in front of Washington Square. We went down in December and did a reconnaissance mission and measured park benches, fence lines and parking meters, took photographs of trees. Our plan is to have this focal point right in the middle of Washington Square because that much yarn will make an impact.

Are there other Salt Lake City yarn bombers?
I don’t know that there are any groups that I am aware of. One day I was driving home in the Avenues and saw a little something and I was like, hmm, is that a yarn bomb? I saw that someone had crocheted this little ring on an old hitching post. And I was like, “Hey, that is a yarn bomb.” I have seen a couple, but the ones I am aware of have all come out of the group trying to do this project for the festival because part of what we want to do is to encourage people to do things around the city. We put some of our random acts of art tags around to use as publicity to get people to come and help us with this project on June 18.

How did you get involved?
I’ve been a knitter for 20 some-odd years and a teacher at local shops around town. Sheryl Gillilan and I are Change Leaders, which is a leadership program the Utah Arts Council, which is how the Utah Division of Arts and Museums started. It’s a way the Arts Council is trying to encourage local leaders to engage the community in unexpected and different ways. So Sheryl, who is also a rabid knitter, suggested doing this at one of our meetings, and that’s how I got roped into it.