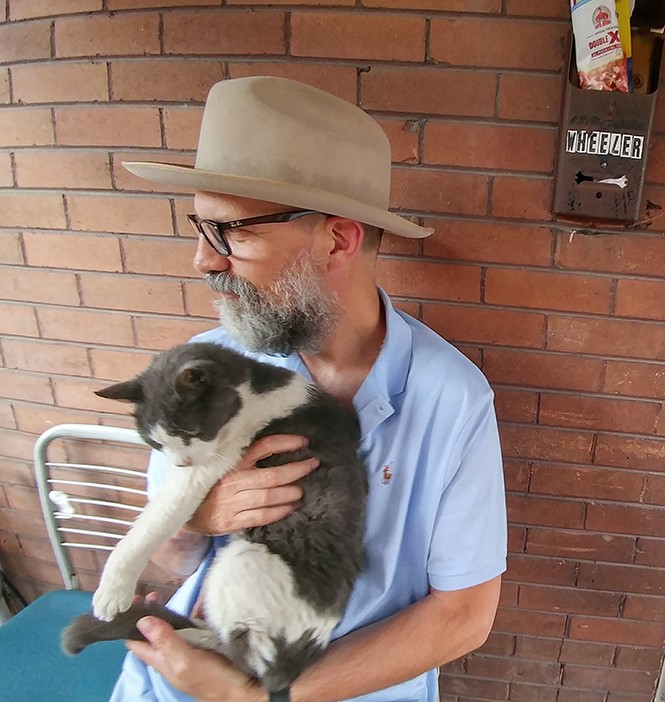 Down a dirt-paved alley in a University-area neighborhood, a concrete duplex porch is shrouded by a wicker shade. Junk mail sits in a rusty mailbox emblazoned with stickers spelling the occupant's name in all caps, with one letter italicized: WHEELER. White noise emanates from within the dwelling, perhaps masking rat-a-tat raps on the screen door? No—a familiar, resonant voice shouts "Hey!" and the vacuum cuts off.

"Bad" Brad Wheeler fills the doorway. At 6-foot-6, his presence is as large as his voice, so familiar to local music fans from his years hosting Little Bit Louder Now on KRCL 90.9 FM. When Wheeler announced on June 2 that he was leaving the station, the news spread like a brushfire. He'd been a part of KRCL for two decades, and was arguably the listener-supported station's most popular personality. As the embodiment of the station's motto, "Community Connection—Music Discovery," Wheeler filled so many lives with music, laughter and friendship that his absence is a supermassive black hole.

Still, since the announcement of his departure, friends and fans have cried foul, posting messages supporting Wheeler and criticizing the station on his Facebook page. "The day the music died. You blew it, [KRCL manager] Vicki Mann. You ripped the heart out of Salt Lake City," one fan wrote, appending the note with the hashtag #fuckkrcl. Another posted, "Listening to KRCL's drive-time programming post-Bad Brad [is] like trading an imperial double IPA for a budget rosé wine."

Until now, Wheeler has largely refrained from public comment, aside from posting songs such as Steely Dan's "Dirty Work" (with messages to supporters in lyrics like, "You know I'll be around") and changing his profile picture to one of fired FBI Director James Comey. Lounging on a blue corduroy sofa in his living room—a wonderland of music gear and memorabilia—Wheeler says he wanted to ensure he made a thoughtful statement that accurately conveyed the swirl of conflicting emotions he's felt. To that end, he consulted with respected friends and family, including his sensei Michael Mugaku Zimmerman at the Two Arrows Zen Center. "I had the whole fuckin' Zendo lookin' at it," he says with a laugh. He dials his mother one more time—he'd solicited her input on the statement—then reads aloud from his MacBook Pro:

"I am writing this letter to the listeners of Little Bit Louder Now and to the KRCL community at large. I am very sorry to leave KRCL, an organization that has been a large part of my life for the last 20 years. My decision to leave was difficult, but made only after many days of thought and consideration as to what is best for myself at this time in my life."

Wheeler says he felt he and the station had grown apart for some time, and that he shares some of the concerns listeners have about the station's direction. Leaving, he says, was preferable over allowing the relationship to sour any further. "I need to say thank you to the listeners of KRCL for letting me into your homes, your cars, your radios, your ears and your hearts," he continues reading. "Being your DJ was an honor and a privilege." He also expresses his appreciation for the community's support while he recovered from a ghastly leg injury last year, and says he intends to remain in Utah, "doing things I've always done to try and make both your world and my world a little brighter."

Reached for comment, KRCL Board Chair Chip Luman reiterated the station's policy not to comment on personnel matters, but says Wheeler has been a good member of the station, and they'll miss him. "Brad's not the first personality to leave KRCL and have the community react," Luman says. "It's happened many times over the years. But he was well-loved." Regarding listeners' comments, Luman appreciates they feel so strongly about KRCL. "I ask that they come down and see what they can do, to bring that passion to making the station what they want it to be."

Wheeler, meanwhile, doesn't know his next move. Some listeners are calling for the station to rehire him, but that's a can of worms. He's been contacted with proposals from other outlets, but declines to mention them so early in his job search. Whatever happens, he feels good about his decision and his prospects—especially because he has an embarrassment of riches when it comes to supporters. He relates a story from a recent meeting where his interviewer, who didn't know him, said she read his name from a list of résumés and "at least five of her coworkers said, 'You'd be a fool not to interview him.'"

Wheeler escorts me out the door, where he greets his neighbor Lincoln Lysager (a local painter and musician), friend Becky and her 2-year-old daughter. While Lysager waters the flowers—and the little girl—Becky brings out popsicles. There's an ease among them, something more than neighborly. Wheeler records the child frolicking in the watery arch formed by Lysager's garden hose, then sits down and plays it back in slow motion, smiling.

Earlier in our conversation, Wheeler related an exchange involving two important figures in his life: activist/educator Dr. Forrest Crawford and jazz legend Joe McQueen. "[Crawford] told me that Joe's biggest gift to the community is his accessibility. It's totally true. ... Someday I'm gonna have to teach this to somebody else."

Everything's gonna be all right. Bad Brad's gonna come back. Just like he said he would.