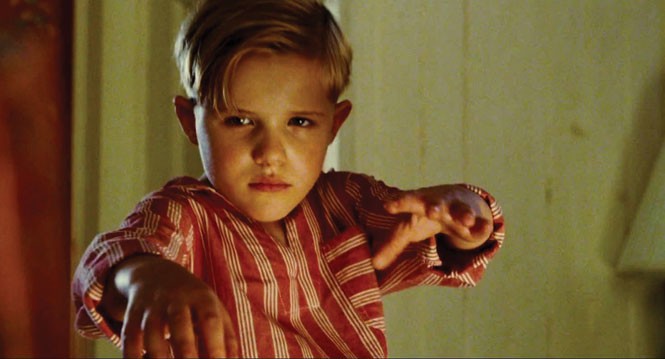 Gauntlet thrown down: Whatever "faith-based films" are meant to be about, for the most part, it sure as heaven isn't about faith.

Caveat: I don't claim to be a theologian. I'm sure Catholics of good conscience may question my interpretations regarding the currently in-release drama Little Boy—and about faith-based filmmaking more generally—and that's fine. But digging into what pissed me off about this movie requires some plot spoilers. So stop reading now if this concerns you. And maybe along the way, we can figure out why so many movies that claim to be about religious faith end up being such an insult to the phrase.

Early in Little Boy, after our diminutive protagonist Pepper's (Jakob Salvati) father has gone to serve in World War II, the parish priest (Tom Wilkinson) hands him a card indicating some things one can do to build faith: "Visit the sick," "Clothe the naked," etc. To these, the priest adds "Befriend Hashimoto" (Cary-Hiroyuki Tagawa), referring to the small town's lone, ostracized Japanese-American resident. That growing friendship becomes a potent part of the narrative, because at that point, the story isn't really about whatever power Pepper might have—or think he has—to magically bring his father home. He has an impact on his "Jap"-hating older brother, and on others in his town, and this kind of faith is powerful; it's not built on whether or not God answers our prayers in the way we want them to be answered, but on understanding that being loving servants of God changes our hearts, and thereby can change the world.

It's also relevant to note that Pepper is more or less at "the age of reason" within the Roman Catholic tradition, an indication of moving away from a child's way of thinking. One can argue the developmental-psychology aspects of that doctrine, but for a while, Little Boy seems to be about that growing understanding of God: expecting him not to be a magician who waves his wand at our request—like the popular comic-book illusionist Pepper sees perform in the movie—but rather a manifestation of love and goodness whose will we are expected to serve.

So it comes to pass that The Bomb is dropped, and the townspeople are all amazed that "Little Boy"—yes, it makes the shudder-inducing connection between the tiny kid's nickname and the code name for the atomic bomb—ended the war through the ferocity of his faith. But we also see Pepper have a nightmare of a bombed cityscape, suggesting his sense of personal responsibility. Then comes the news that his POW father had not survived during a firefight to liberate the camp. After the funeral (with no body to bury), the grieving boy places his list of good deeds on the headstone. "I did this for you," he said, and what a stunning way this would be to end this story. His father's impact on his life was making him want to be a better person, and a better Christian.

Guess what: Another prisoner had stolen Dad's boots (including his dog tags), and had been misidentified among the dead. So Pepper's faith brought Dad home alive after all! Hurray!

Is the power of faith only proven when God lets us get our way? Is this a variation on the God who cares about sports results—one who doles out prizes based on who prayed hardest? Are these grown-ups making these movies, or people still selling their viewers the faith of a child?

What we're seeing time and again in "faith-based" movies has nothing to do with building faith; it's about pandering to the audience. Over and over again, these movies tell the faithful what they've already decided is true about God, about those who believe, about those who don't believe. It's "fan service" just as egregious and cynical as references in a comic-book movie. These movies are products designed to sell tickets, because they're telling people what those people are happy to hear. These are movies that are meant to make the people who watch comfortable—and if there's one thing real faith is never meant to do, it's make you comfortable.

Maybe, eventually, someone will again have the soul to imagine that "faith that can move mountains" can mean moving the mountains of hatred and self-regard that we have inside of us—as did local filmmaker Richard Dutcher in his daring drama Brigham City, for example—and not just getting a heavenly magic wand waved in our direction. God only knows that's a vision we could stand to see more of.