Electronic R&B artist Lo-Fang (moniker of Matthew Hammerlein, from Maryland but now based in Los Angeles) is responsible for the eerie cover of "The One That I Want" that Baz Luhrmann used in a Chanel No. 5 commercial—the one that turns that peppy Grease anthem into a dark and heart-achy ballad. The single is on Blue Film (4AD), Lo-Fang's intense debut, where Hammerlein plays every instrument. On stage, the classically trained violinist uses a looping delay so he can play violin—and guitar and cello, accompanied by a live drummer. It would be worth taking the time to brush up on '90s rock before this concert, because Boise band Built to Spill is headlining, with a new album, Untethered Moon. The riff-y rock band is aggressively energetic, and tends to jam for extended periods and play unexpected covers (like "Paper Planes" from MIA and "Slurf Song" from Michael Hurley). Openers Sego, from Mapleton, have moved to Los Angeles, played at SXSW and are getting traction; see them now so you can claim to have seen them before they got huge. Their indie rock has a little surf-pop and haze, and is playful (to wit, the duo sings "blah blah blah" in the aloof track, "20 Years Tall.")(Tiffany Frandsen) Ogden Amphitheater, 343 E. 25th St, Ogden, 6 p.m., $5 in advance, $6.50 day of, OgdenTwilight.com 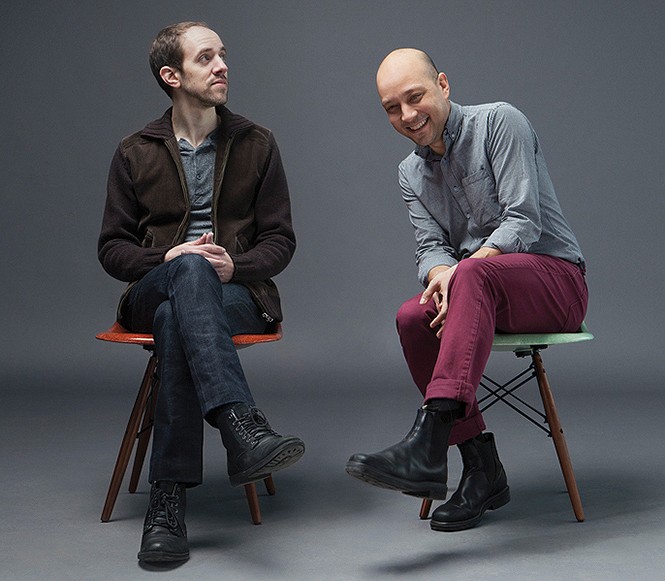 Helio Sequence
Helio Sequence's new self-titled album was inspired by the 20-song game, a challenge that had been going around the band's hometown of Portland, Ore. The rules are simple: the band goes to a recording studio for one day, records 20 songs, and when they finish, they have a party and listen to the results. The band joined in, sent an ambitious 26 songs to friends and family and had them pick their favorite 10 for their sixth LP. It's a hazy, ambient and psychedelic record, with subdued vocals and playful drumming. Live, the duo is more energetic and even intense. Drummer Benjamin Weikel looks like he'll jump off his stool at any moment (check out his face while he performs; it's joyful and endearing). (Tiffany Frandsen) Urban Lounge, 241 S. 500 East, 9 p.m., $15, TheUrbanLoungeSLC.com

Austin-based lady garage rockers The Harms are finishing their debut LP (a follow-up to their 2013 EP), but two psychedelic and sassy songs—a ballad about a teenage vampire suicide pact, called "Graveyard Love" and a post-punk-paced surf-pop track, called "Sound Dragons"—were released in May on lavender vinyl. The trio play the dark side of pop, with hectic and sometimes fuzzy guitar riffs from frontwoman Chase Frank and frantic drumming from Jessica Alexander. They played three intimate sets at SXSW earlier this year, and May marked the beginning of their first national tour. (Tiffany Frandsen) Diabolical Records, 238 S. Edison St., 8 p.m., free, Facebook.com/DiabolicalRecords


Rock Your Face Off (Loud and Proud) is the first new music from this Baltimore-based quintet since 1995. It's also the first not written by founding songwriter and bassist Donnie Purnell, the band's ostensible "creative mastermind." Since Kix quit in 1995 and reformed without Purnell in 2003, it might seem like they lacked creative juice without him. Nope. Rock Your Face Off is heaving with the bluesy, power-poppy rock & roll that propelled Kix to platinum status in the '80s and '90s. "Mean Miss Adventure" and "Tail On the Wag" are right up there with classics "Get It While It's Hot" and "Ring Around Rosie," and prove Kix are still for kids. (Kix goes on at 7:30, but a battle of the bands and other festivities begins at 11 a.m.) (Randy Harward) Harley-Davidson of Salt Lake, 2928 S. State, 7:30 p.m., $22, HarleyDavidsonOfSaltLakeCity.com/Events 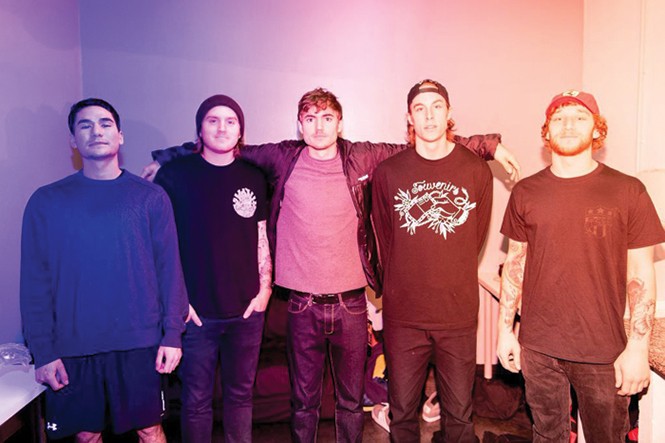 The Story So Far


The California-based pop punkers came out with their third effort early last month and seem to think it's band-defining enough to give it an eponymous title. As early as their first LP in 2011, The Story So Far was making the type of pop punk Warped Tour delinquents eat for breakfast, only they were making it better than their fizzy post-Paramore peers. This found them graduating to the Warped main stage in 2014. Now, with a fresh record, the band has settled on a definitive sound that all but substitutes the crystal clear vocals of past records for a gravelly, angst-heavy performance, found impressively on display in the lead single "Heavy Gloom." The rest of the band, meanwhile, has honed a more dynamic, instrumentation that makes for a head-bangy, live-friendly sound. It's pop punk on a platter, carrying the torch of the Yellowcards and New Found Glories of yesteryear. (Robby Poffenberger). The Complex, 536 W. 100 South, June 8, 6 p.m., $20, TheComplexSLC.com 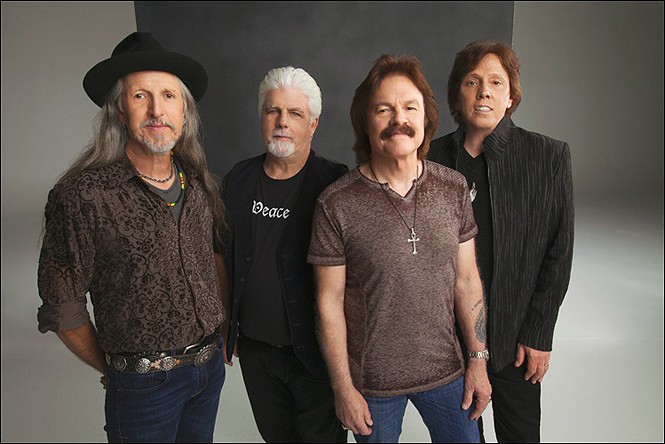 There are two chances to hear the groovy rock & roll, R&B, funk—and just a bit of country soul—sounds of the California band The Doobie Brothers this summer: at the Ed Kenley Amphitheater in Layton, or at the Sandy Amphitheater. Although the group released three albums since 2000 (including one country-soaked record in 2014, Southbound), their set list relies heavily on the classic tracks from the early '70s (because how could they neglect fan favorites, like "Listen to the Music" and "China Grove?"). Tom Johnston and Patrick Simmons still lead the band after five decades, and even though co-founder John Hartman retired at the end of the '70s (and then again, after the reunion in the early '90s), they still tour with two drummers, making for a smash-bang percussion section to back up the other eight members of the band. Forty years after the band formed, they are still energetic and boogie-inducing. (Tiffany Frandsen) Ed Kenley Amphitheater, 403 N. Wasatch Dr., Layton, June 9, 8 p.m., $45-$89, DavisArts.org; Sandy Amphitheater, 1245 E. 9400 South, June 10, 8 p.m., $43-$75, SandyArts.com 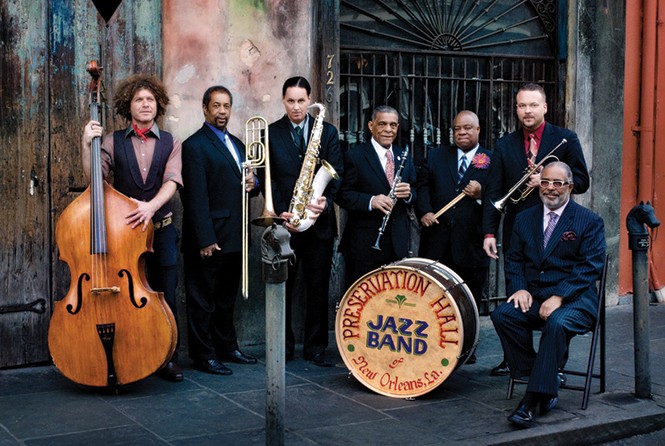 Preservation Hall Jazz Band, formed to preserve and perpetuate traditional New Orleans jazz music and named after the New Orleans venue, tour more than 150 days a year. And after 50 years, they're still going strong with their authentic, vintage sound. They play jazz standards, both joyous and mellow, but 2013's That's It! (Sony/Legacy) is the group's first album of original tracks. True to jazz spirit, solos and improvisation are plentiful, rhythms are red-hot and melodies are infectious. In addition to the razzmatazz, the musicians have moves; Ronell Johnson, especially, appears just as animated carrying a heavy tuba or his trombone as he does when taking his turn on vocals. To get in the mood for the concert, check out the band's cover of "Wake Up," which they performed at Coachella alongside Arcade Fire. (Tiffany Frandsen) The State Room, 638 S. State, 8 p.m., $43, TheStateRoomSLC.com

When bands embark on 10-year anniversary tours, the purpose is to invoke feelings of nostalgia. If this is true, then pop punk bands of the early '00s—like Mae—have more of a right than anyone to tour these albums, because nostalgia defines their sound. The Virginia-based outfit's The Everglow, originally released to critical acclaim, is a moving concept album that weaves fluidly from angsty alt-rock to piano-laden melodrama, rocking audiences with cuts like "Mistakes We Knew We Were Making" and softening them back with power ballads like "The Ocean," a lovely nod to pre-'00s Jimmy Eat World. Thus far, the consensus on the tour seems to be that neither the band nor the fans have skipped a beat. And appropriately enough, they will play The Everglow beneath a canopy of glowing yellow lights. (Robby Poffenberger). Area 51, 451 S. 400 West, June 6, 6 p.m., $20 in advance, $25 day of, Area51SLC.com