THURSDAY 4.14
Utah Opera Resident Artists
This week's installment in the nonprofit Excellence in the Community concert series takes you to the opera. Utah Opera's Resident Artists program has been established for singers and pianists as a stepping-stone between graduate school and a career in operatic performance. The current season's resident artists include soprano Jessica Jones, mezzo-soprano Sarah Coit, tenor Christian Sanders, baritone Markel Reed and pianist Timothy Accurso. These artists are already well-traveled in their studies, with residencies and guest performances at some of the major opera houses around the world. The evening gives a local audience an opportunity to preview some of the up-and-coming faces in the opera world. (Brian Staker) Gallivan Center, 239 S. Main, 7:30 p.m., free, ExcellenceConcerts.org

FRIDAY 4.15
Gene Loves Jezebel
Ever since the Aston twins each decided the other was a jerk, there have been two versions of Gene Loves Jezebel, the beloved British band that gave us glammy goth-rock songs like "Gorgeous," "Motion of Love," "Heartache" and "Desire" in the late '80s. When they settled their legal dispute in 2009, Michael claimed the United States for himself, and Jay took the U.K. If either of them decide to tour in the other's domain, they must call themselves Michael (or Jay) Aston's Gene Loves Jezebel. So, on this show, don't expect any of the Jay-only GLJ tunes, like "Jealous," from 1990's Kiss of Life (Geffen). That's too bad, because the sassy rocker got so much airplay here in Salt Lake City. But a lot of people think the band's best albums are its two predecessors: 1986's Discover and 1987's The House of Dolls. Since the four aforementioned fan favorites came from those two albums, most fans oughta be happy tonight. (Randy Harward) Liquid Joe's, 1249 E. 3300 South, 8 p.m., $12 in advance, $15 day of show, LiquidJoes.net

Nathaniel Rateliff & The Night Sweats
Missouri-born Nathaniel Rateliff's work is a soulful mixture of gospel, R&B and early Bruce Springsteen—boisterous, definitively American and uplifting in all the most complimentary ways. In 2007, as Nathaniel Rateliff and The Wheel, he self-released Desire and Dissolving Men to no small acclaim. After two critically lauded full-length solo albums: In Memory of Loss (Rounder, 2010) and Falling Faster than You Can Run (Mod y Vi, 2013), Rateliff's latest project, Nathaniel Rateliff & The Night Sweats, focuses on soul and R&B. Their self-titled, Richard Swift-produced debut came out last year on soul powerhouse Stax Records, and it sounds like it was recorded in the label's heyday. Prepare to be transported tonight. (Zac Smith) The Depot, 400 W. South Temple, 9 p.m., $25, DepotSLC.com

FRIDAY, SATURDAY, SUNDAY 4.15, 16, 17
Booker T. Jones
Soul innovator Booker T. Jones has had—and continues to have—an awe-inspiring career. Born in Memphis, Tenn., Jones was something of a musical prodigy, learning to play the oboe, sax, trombone and piano at an exceptionally young age. He went on to play the keyboard, bass, guitar and, most notably, the Hammond B-3 organ. In his teens and 20s, Jones went to work for Stax Records as a studio musician and writer, variously crafting hits for Eddie Floyd, Otis Redding and Albert King. His first major success came with the instrumental "Green Onions" by Booker T. and the M.G.s, released in 1962. Since then, Jones has received three Grammy Awards, released more than 20 albums, and collaborated with Neil Young, Elton John, Lou Reed and even Rancid—playing organ on "Up to No Good," from 2013's Let the Dominos Fall (Hellcat Records), along with countless others. Sound the Alarm, released in 2013, heralded Jones' return to Stax, with favorable reviews. Jones' signature soul, R&B and rock sound is as versatile as it is ageless. (Zac Smith) The Egyptian Theatre, 328 Main, Park City, Friday & Saturday, 8 p.m.; Sunday, 6 p.m., $35-$55 ($5 more day of show), EgyptianTheatreCompany.org

SATURDAY 4.16
Spose
"This is me," wrote Spose in an email to City Weekly. "This" was a link to the video for his song "(Nobody)." He probably sent it to every other media outlet on his tour schedule, too. I mean, it's not like we're special. Or awesome. "But, whether I like it or not," Spose followed up, "I'm most known for this." That link pointed to "I'm Awesome," a track from his self-released 2007 album, Preposterously Dank. The track went viral and, as of this writing, has 12.7 million views on YouTube. It also netted Spose a deal with Universal Republic Records, which lasted all of one album—because Spose, who champions the working class and lives to skewer the egomania and hypocrisy of rap music—wouldn't sell out and write a pop song. So, when he juxtaposes one "me" with the other, comparing his serious stuff to his, sigh, "hit," he's simply asking us to check out what else he has to offer. "Nobody," and the other songs on Spose's fifth album Why Am I So Happy? (on his own P. Dank label), are hilarious and incisive, a much-needed rap reality check. Universal's loss is our gain, as Spose capitalized on the experience, using social media to ensure he didn't fade away—his newer YouTube tracks still clock in the six- and seven-figure range. With Tommy B, The Underclassmen and Young Yankee. (RH) In the Venue, 219 S. 600 West, 7 p.m., $14, IntheVenueSLC.com 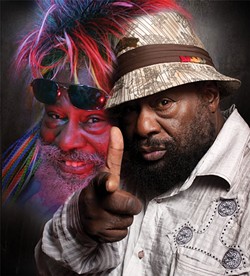 MONDAY 4.18
George Clinton and Parliament Funkadelic
Back in the aughts, the Mothership landed at Kingsbury Hall. Rarely do you see people get out of their seats in that venue, but we all rushed the stage like UFO nuts eager for abduction. When the band came on, it seemed like they played for half an hour or more before George Clinton showed up. When he finally appeared, Clinton looked majestic in his robes, like space royalty—nay, a god! The great architect behind Parliament Funkadelic's intergalactic sound, a rocket fuel composed of whomping bass, big horns and Minimoog (also credit original keyboard player Bernie Worrell for that, especially on "Flash Light"), then proceeded to, as the song says, "tear the roof off the sucker." There are gonna be a lot of happy funk fans in the roofless house tonight. (RH) The Depot, 400 W. South Temple, 8:30 p.m., $30 in advance, $33 day of show, DepotSLC.com

WEDNESDAY 4.20
The Nods
Salt Lake City band The Nods play a style of garage punk (for lack of a better term) that harks back to classic '60s garage-rock bands like The Seeds or The Sonics: tambourines and treble knobs aflutter, reverb pedals pushed to the floor like the accelerator pedal of your dad's GTO. Their sound also connects with '80s revivalists like Echo & the Bunnymen and The Jesus and Mary Chain. Their 2015 album Ariadne's Thread (available on their Bandcamp page) stitches a seven-segmented web that ensnares you with its infectious snarl. True to the punk part of their label, "Brittle System," "Ignore the Scene" and others engage in a little of the protestation that punk rock can't seem to do without. But there's fun, too, with the tongue-in-cheek "Pretty Song," and introspection with "Chromatic Recollection." Josh & Ian, Soft Limbs and Chalk open. These local acts, together on the same bill, bridge the gap between the sounds emanating out of garages in the '60s, the '80s, into the present and beyond. (Brian Staker) The Urban Lounge, 241 S. 500 East, 8 p.m., free, TheUrbanLoungeSLC.com.