THURSDAY 4/18
Portland Cello Project
Asked to name a favorite cellist, most pop fans would probably respond with a vacant stare. Yet if asked their favorite cello group, some might mention the Portland Cello Project, an ad hoc ensemble whose stated mission is to bring the cello front and center while working with other artists through a series of unique and experimental collaborations. OK, we get it. Consider the group one part pop orchestra (sans most every other instrument) and one part the work of educators and enthusiasts. Kind of like what might have happened if your favorite music teacher suddenly went bonkers and opted to transfer to the School of Rock. Simply stated, they're the hippest bunch of cello players in Portland or, for that matter, anywhere else. In the dozen or so years since their formation, the group has expanded its repertoire from rock, pop, folk and funk, to jazz, hip-hop and even heavy metal, performing in venues that range from punk dives to the classiest concert halls. They've collaborated with a diverse assortment of notable names (The Dandy Warhols, Eric Bachmann, Dan Bern and Peter Yarrow among them), and covered Kanye West, Beck and Justin Timberlake in the process. They're also signed to an especially cool record label; Kill Rock Stars is a mainstay of the indie ethos. That's a cellist's triumph in itself. (Lee Zimmerman) The State Room, 638 S. State, 8 p.m., $22, 21+, thestateroompresents.com

Drake Bell
Anyone who sees the name Drake Bell probably knows the name from the popular early aughts show Drake & Josh on Nickelodeon. Many who grew up with the show would also recall that the show's Drake Parker was a swaggering, cool-guy rock 'n' roller constantly embarrassed by his stepbrother Josh. Well, Drake Parker wasn't too far from the real Drake, who learned guitar at the age of 12 in the hands of The Who's Roger Daltrey, years after he'd started navigating the world of child acting. Bell has released three albums and two EPs, starting with 2005 full-length Telegraph, followed by 2006's It's Only Time and finally, eight years later, joined by his rockabilly-inspired, cover-laden 2014 album Ready Steady Go!, which was produced with the help of Stray Cats frontman Brian Setzer, a childhood hero of Bell's. Since then, he's moved onto experiments in the sultry sounds of electro-dance pop on EPs like 2017's Honest. On a late 2018 single, "Fuego Lento," Bell pulls Latin-infused guitars into the song to create the kind of romance-shot sound often found on Top 40 club songs. 2019 finds Bell playing around with hip-hop, with an acoustic cover of Lil Pump's "Gucci Gang" and an EP, Smoke It Up, which features Lil Mama on the song "Comin' Back for You." From rockabilly all the way to these new experiments in soft-singing, sensual hip-hop, Bell certainly has a preference for anything upbeat and pop-ready. It'll be interesting to see what side of himself he shows at his April 18 appearance at The Complex. (Erin Moore) The Complex, 536 W. 100 South, 8 p.m., $19.50, all ages, thecomplexslc.com

SATURDAY 4/20
Death Angel, Act of Defiance, Truce in Blood, Damn Dirty Vultures, Davidian
Don't get it twisted, fellow metalheads: the focus might have been on SoCal in the early '80s due to the glam rock, hair metal takeover on Sunset Boulevard, but the Bay Area was silently brewing an underground storm. Best known as the Bay Thrash Metal Movement in its early days, thrashers waged war against the mainstream status quo of substanceless music. Daly City's Death Angel were at the frontline in that movement, headbanging and shredding against glam rock with their Jackson axes in hand and circle pits at their every command. A Biblical war of sorts certainly fits Death Angel's modus operandi; most of their albums feature war and scripture passages ("Dethroned," "Lost"). Death Angel took a hiatus shortly after their third record, Act III, at the height of the thrash movement. After said hiatus and a short breakup, Mark Osegueda and Rob Cavestany set their differences aside to focus on what really mattered: making music. "I removed myself from it for quite a few years," Osegueda told host Jackie Kajzer on her show Full Metal Jackie in 2017, "so, I think the first time around, as magical as that time was, now, I look back on it with a greater appreciation. And, when I took that downtime off, I thought if I ever have the opportunity to do this once again, I'm going to savor every second of it. And so now, I have this appreciation for metal I wish I had the first time around." Sometimes a break is needed to refocus and resume the war on the mainstream, and that is what Death Angel's latest album The Evil Divide signifies. Death Angel is slaying with Act of Defiance and Truce in Blood, so ask not what thrash can do for you, but what you can do for thrash. (Rachelle Fernandez) The Complex, 536 W. 100 South, 6:30 p.m., $18, all ages, thecomplexslc.com 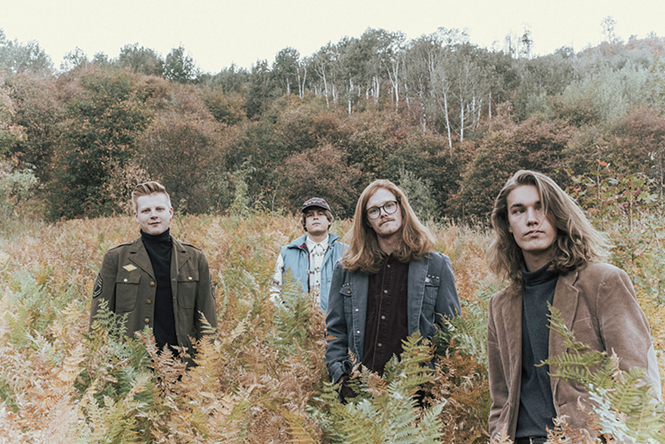 The Backseat Lovers, Drusky, Jung Neil
When we featured The Backseat Lovers in February, shortly after they released their first album, When We Were Friends, City Weekly music writer Nick McGregor noted that, "like the country-tinged emo-punk of Pinegrove and the R&B-bathed rock of Alabama Shakes, you can hear the desperation, the ecstasy and the ennui in every note The Backseat Lovers hit. It's authentic, incisive and irresistible—no matter the genre." The young foursome's music spans genres—from folksy rock to angsty bedroom pop—but it's all delivered in their signature heartfelt croon, made especially (although not exclusively) to appeal to those undergoing the early-20s transition to adulthood, with references to skipping class, leaving for college and social media—like the soulfully delivered, sarcasm-tinged line from "Watch Your Mouth": "At least your Instagram is up to date." Since their album release, The Backseat Lovers have played farther from home than they have before—in Pomona and L.A.—as well as in Utah venues in Logan, Salt Lake and Provo. For this show, they return to their birthplace—Provo's Velour Live Music Gallery—where founding members Jonas Swanson and Joshua Harmon met at an open-mic night. A year later, their newly-formed band performed their first live show there at the summer 2018 Battle of the Bands, which they won. They released an EP that month, too, and as their touring schedule and musical output demonstrates, they've got big goals. "We want to give the music everything we've got," Harmon said in February. We don't need to tell y'all to go support these dreamers—but only because their fans have already bought out the show. (Naomi Clegg) Velour Live Music Gallery, 135 N. University Ave., Provo, 8 p.m., sold out as of press time, all ages, velourlive.com

Tuesday 4/23
Ages and Ages, The Harmaleighs
Ages and Ages are a tight-knit indie group who jumped on the scene from their native Portland, Ore., in 2011, when their brand of upbeat, uplifted indie pop was popping left and right. Their debut album Alright You Restless, which came out that year, was dubbed "choral rock" not only for the way the band sang together, but also for their in-unison clapping and communal use of shakers and other noise-makers. It was this bright, spirited style that brought them success, and they followed this success with three more full-length albums, the last two of which were inspired by political issues. 2016's Something to Ruin was inspired by a trip that main singer Tim Perry and another core member, bassist Rob Oberdorfer, took to central America, where they found parallels between the ruins of an ancient civilization being swallowed by the rainforest and the growth of their own community, Portland, which was rapidly changing around them. Their latest release, 2019's Me You They We, is a product of similar ruminations. After the 2016 elections, Oberdorfer and Perry met up regularly to unpack their feelings about the news cycle, and these meetings became the album, which despite its origins in a place of distress, still fronts their positive, ultimately optimistic sound. Ages and Ages play at Kilby Court on April 23 with Nashville band The Harmaleighs, a duo who like Ages and Ages found fame in folk-pop, but whose latest single, "Sorry, I'm Busy," is a fast, beat-driven track that indicates an interesting shift well worth seeing. (EM) Kilby Court, 748 S. Kilby Court, 7 p.m., $12 presale; $15 day of show, all ages, kilbycourt.com

Tuesday 4/23
Murs , Locksmith, Cojo, Zac Ivie
Murs is a former member of the California hip-hop collective Living Legends—which is, like, legendary in underground rap circles. He's also worked extensively with Atmosphere's Slug, released 11 solo albums dating back to 1997 and developed a well-deserved reputation as a killer live act. He's highly animated and all over the stage as a performer, possessing a great presence that harkens back to the golden age of hip-hop. Not to mention, Murs—with his catch-me-if-you-can flow and crystal-clear intonation—is highly expressive on the mic. On his latest album—2018's A Strange Journey Into The Unimaginable—he's up front about his personal struggles, rapping in matter-of-fact fashion about weathering a divorce and custody battle, losing his stillborn son and struggling with chronic depression. Murs is in top form when he's pumping up the party jams and when he's being sneaky-funny, though. This is the dude who got semantic about dating on his 2004 track "Bad Man," rapping: "Never kissed you in public and I never held your hand/ I never said I loved you, so I never was your man/ How can we break up?" Murs is joined by Locksmith, a fellow underground rapper from the Bay Area who, like Murs, is criminally underrated as a lyricist and also boasts monstrous freestyling skills. Cojo and Zac Ivie also open. (Howard Hardee) The Urban Lounge, 241 S. 500 East, 8 p.m. $18 presale; $20 day of show, 21+, theurbanloungeslc.com