FRIDAY 4/5
Roger Clyne & The Peacemakers, Ghostowne
Arizonan singer-songwriter Roger Clyne arguably made his biggest mark on pop culture in the mid-90s with his band The Refreshments, best known for their 1996 hit single "Banditos" and the indelible opening theme of Fox animated series King of the Hill. In the two decades since, Clyne certainly has kept himself busy. Clyne and drummer P.H. Naffah re-branded The Refreshments as Roger Clyne and The Peacemakers in 1998, and the group hasn't stopped touring and releasing music since, treating their thousands of devoted fans to eight full-length albums and countless live shows from coast to coast, as well as dozens of studio vlogs, concert webcasts and live recordings. The Peacemakers have also spearheaded their own Circus Mexicus annual music festival for nearly 20 years, shared the stage with musical legends such as Johnny Cash, Sammy Hagar and John Fogerty and even released their own line of tequila. This spring, Clyne and The Peacemakers are once again bringing their sun-baked, hard-rocking fusion of Americana, power pop, reggae and mariachi to bars and clubs across the country, including a stop at The State Room on April 5. Local roots-rock outfit Ghostowne opens. (Nic Renshaw) The State Room, 638 S. State, 9 p.m., $22, 21+, thestateroompresents.com

Spiritualized
Jason Pierce and his cohort of psych-rock cosmonauts write and perform big songs about seemingly small ideas. On their first album in six years, And Nothing Hurt, released in 2018 on Fat Possum, Pierce tackles such interplanetary ideas as relationship apathy and adulthood fatigue. "I'd like to sit around and dream you up a perfect miracle," he gently croons over a ukulele strum on the album opener, "A Perfect Miracle." By the time the chorus hits, Pierce is already over it: "My mind is a mess and I'm needing you less/ Give me a call in a little while." It's pure doldrummery, but the music only gains altitude—timpani drums and Spiritualized's signature guitar drone enter at the midway mark to bear the song up. Exploring simple concepts in a galactic context has been the band's recipe for catharsis since the George H.W. Bush administration. Those moments happen throughout And Nothing Hurt, which Pierce hinted might be their last record. It's a good album to know, not only for its quality but because Spiritualized will likely play it in its entirety after opening with standards from their 1992 debut, Lazer Guided Melodies, and their 1997 opus, Ladies and Gentlemen We Are Floating In Space. With those songs, J. Spaceman and crew don't need the Los Angeles Philharmonic to achieve spectacle, though they still enlisted the orchestra at an L.A. tour stop last year. Their SLC show has no opener or guest ensembles, and it's a seated event—just like the Apollo 11 launch. (Robby Poffenberger) The Depot, 13 N. 400 West, 7 p.m., $35-$55 presale; $40 day of show, 21+, depotslc.com

SATURDAY 4/6
Hozier, Jade Bird
Irish-born singer and song composer Andrew Hozier-Byrne, known simply as Hozier, skyrocketed to fame five years ago thanks to his anthemic breakout single, "Take Me to Church," and his platinum-selling, self-titled debut album. After the whirlwind of going from open mics in Dublin to the Grammy Awards in less than two years, he's tackling the challenge of following up a smash record with his sophomore LP, Wasteland, Baby! The 26-date Wasteland, Baby! Tour promises to be a major production: Hozier has recruited a seven-member band, with each serving as a vocal accompanist, to bring his new collection of dramatic, cathedral-worthy songs to life. All aspects of Hozier's performances suggest intense emotions, from his soaring and soulful voice to his finger-style acoustic guitar playing. His lyrics have a dark streak, such as the chorus of his 2016 single "Cherry Wine," which hints at an abusive relationship: "The way she tells me I'm hers and she is mine/ Open hand or closed fist would be fine/ The blood is rare and sweet as cherry wine." That's not to say Hozier's music is all shadows and storm clouds. He'll often add tongue-in-cheek elements, and sometimes he balances darkness with downright sweetness. On the title track of Wasteland, Baby!, he sings, "All the fear and fire of the end of the world/ Happens each time a boy falls in love with a girl." English singer-songwriter Jade Bird opens. (Howard Hardee) The Union Event Center, 235 N. 500 West, 8 p.m., $45, sold out as of press time, theunioneventcenter.com 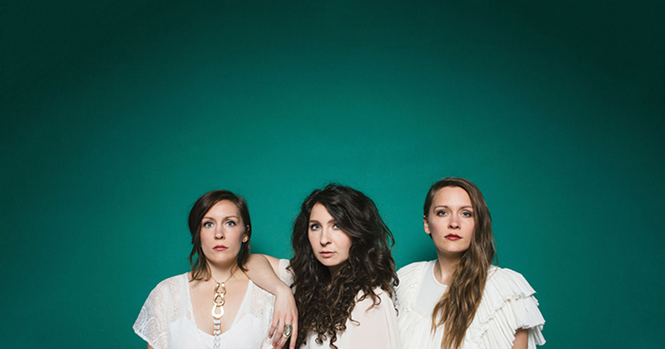 SATURDAY 4/6
Joseph, Haley Johnsen
In "White Flag," a song from Joseph's second full-length album I'm Alone, No You're Not, released in 2016, the trio take a cue from English singer-songwriter Dido and declare unrepentant refusal to capitulate: "I could surrender but I'd/ just be pretending, no I'd/ rather be dead than live a lie." But in this case, Joseph are refusing to surrender not love, but ideals, singing a "marching song," a declaration of their intent to keep speaking up, keep making noise—complete with handclaps and ebullient harmonies. It's protest music, a note of triumph in an era that seems intent on swallowing us all up. Joseph are a trio of sisters from Portland, Ore.; their name is a tribute to a small town in their home state and their grandfather. Formed when singer-songwriter Natalie Closner Schepman recruited her younger twin sisters Meegan and Allison to sing vocals, the band built a following playing intimate living-room shows, eventually self-releasing their first album in 2014. Since then, they've catapulted up the charts, with I'm Alone debuting at No. 1 on the Billboard Heatseakers chart in 2016 and going viral on Spotify; they've appeared on Ellen, Conan, The Tonight Show and at NPR's Tiny Desk Concert, among other notable showcases. But that hasn't dimmed the acoustic magic of the folk trio, whose latest EP, 2017's Stay Awake, is gentler and more intimate than I'm Alone, a heartfelt showcase of the sisters' lilting, emotional harmonies. Joseph are accompanied by fellow Portland native, soulful folk-pop artist and American Idol star Haley Johnsen. (Naomi Clegg) The Commonwealth Room, 195 W. 2100 South, 8 p.m., $27-$42, 21+, thestateroompresents.com

SUNDAY 4/7
Ruby Boots, Salduro, The Poppees
Although she hails from the land Down Under, Ruby Boots' soulful yet seductive style finds an easy fit within the broad label of Americana, proof that the genre provides a vast umbrella that easily extends from Austin to Adelaide. Then again, Ms. Boots—born Rebecca Louise Chilcott—has been a wanderer since early on, having left home at age 16 to make her way up Australia's windblown west coast, eventually settling in one of the country's more remote regions. She took a job on a fishing boat and, while spending long stretches at sea, picked up guitar, wrote some songs and carved out a career that's netted her a burgeoning fan following and a rapid rise in acclaim. With three EPs and a pair of albums to her credit—debut release Solitude and follow-up Don't Talk About It—she's shored up a cache of intimate and expressive melodies that hold back nothing when describing what's left after a wrecked romance and malignant manipulation. An artist who would seem to naturally find favor with any supporter of the #MeToo movement, she's adept at expressing the injustice of sexual betrayal without falling prey to helplessness. Indeed, Boots is far more prone to kick some butt. (Lee Zimmerman) Kilby Court, 741 S. Kilby Court, 7 p.m., $10 presale; $12 day of show, kilbycourt.com

TUESDAY 4/9
Ben Folds w/ Utah Symphony
Go ahead and try to make sense of Ben Folds and his off-the-wall career. An expert pianist who went to the University of Miami on a percussion scholarship, Folds' first album, Party Night: Five Songs about Jesus, contained four songs that had nothing to do with Jesus. After stints working in Nashville as a session musician and in New York City as an actor, Folds returned to his native North Carolina and started a trio named Ben Folds Five, breaking big in the 1990s on alt-rock radio with a new twist on smart piano-pounding balladry that Folds once called "punk rock for sissies." Over the last few years, though, the 52-year-old has taken an artistic leap into relatively uncharted waters: translating his pop repertoire into classic concertos. His last full-length album, 2015's So There, is a chamber rock tour de force recorded with the esteemed New York City ensemble yMusic, a feat Folds has replicated time and time again while touring with symphony orchestras the world over. (His latest single, 2018's "Mister Peepers," pokes satiric fun at President Donald Trump.) Folds returns to the Beehive State to perform another sold-out show with the Utah Symphony; sweetening the deal is a pre-concert AMAAM (Ask Me Anything ... About Music): A Ben Folds Master Class, which pulls lessons from his forthcoming memoir A Dream About Lightning Bugs: A Life of Music and Cheap Lessons. "I tell the audience that I'm expressing myself completely through a different form here," Folds told NPR's Weekend Edition in 2015 of his classical forays. "It doesn't seem like a leap to me ... It feels like home." (Nick McGregor) Abravanel Hall, 123 W. South Temple, 7:30 p.m., $59-$369, all ages, utahsymphony.org