Judas Priest, The Residents, Clownvis Presley, The Breeders and more. 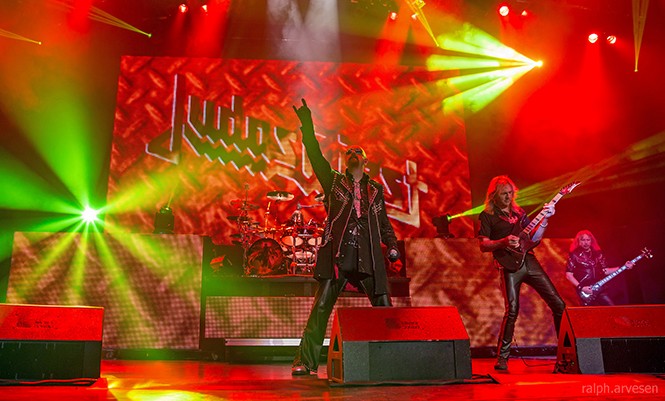 FRIDAY 4/13
Judas Priest
They're one of heavy metal's biggest and most influential acts, but Judas Priest shows a folk influence in taking their name from a Bob Dylan tune ("The Ballad of Frankie Lee and Judas Priest") and covering Joan Baez' "Diamonds and Rust" (coincidentally a song about Dylan) on their third album, Sin After Sin (1977). Priest's sound evolved slowly and steadily from psychedelic blues rock on their 1974 debut Rocka Rolla, becoming heavier with every new album—especially after Tim "Ripper" Owens replaced longtime singer Rob Halford in 1996. This continued when Halford returned in 2003, shedding his Harley-riding leather daddy image for something more epically demonic. The band's latest album, Firepower (Epic), is produced by Tom Allom (who helmed 1988's Ram It Down) and Andy Sneap (producer/engineer for dozens of metal bands, including Megadeth, Obituary and Napalm Death), and maintains Priest's signature darkness and gravity. That aesthetic suits Priest as much as their '80s arena rock era that saw them leading raised-fist sing-alongs to "You've Got Another Thing Coming" and "Turbo Lover," the louder material is a surprisingly good fit with the hits. Fans might be disappointed that guitarist Glenn Tipton is sitting out most of the tour due to Parkinson's disease—but Sneap, formerly of the bands Sabbat and Hell, is proving a capable substitute in his stead. (Randy Harward) Vivint Smart Home Arena, 301 W. South Temple, 7 p.m., $46-$72, all ages, vivintarena.com

The Residents
If they had any kind of conventional pop-music molecule in their bodies, The Residents' patented eyeball helmet headwear would be known the world over. If they were some kind of nouveau-metal genre, Faygo-swilling Juggalos might be sporting the giant orbs instead of makeup. But then, the Louisiana-based band's distorted take on the pop repertoire is an acquired taste, and their experimental pieces frame them as obscure listening. Their Ralph Records label made releases by musical freaks like Snakefinger and Renaldo and the Loaf possible. Still, The Residents are better known for their visual impact than for how they sound. That's a pity, because they've done a lot to push the limits and boundaries of what might, by some stretch of the imagination, be considered popular music. Popular in a textbook sense: Their album Stars & Hank Forever (Ralph Records, 1986) featured covers of Hank Williams and John Philip Sousa. They are to music what outsider artists have been to visual art. Their most recent release, The Ghost of Hope (Ralph, 2017), is based on a historical narrative about train wrecks. Any live performance is bound to be an indescribably strange theatrical spectacle. (Brian Staker) The Urban Lounge, 241 S. 500 East, 8 p.m., $30, 21+, theurbanloungeslc.com

MONDAY 4/16
Clownvis Presley
You might recall this circus peanut of a rockabilly singer from "We Need a Gimmick" (City Weekly, Feb. 15, 2018), which featured a bunch of weird bands. If not from there, then you might have seen him on a competition reality show that we won't name because yuck (although CP definitely provided yuks). Anyway, in the Clownvis Presley blurb, I call him, "... a little bit clown, a little bit king of rock 'n' roll and a little bit Bible historian on 'Jesus Christ Eatin' on a Chicken Wing,' where he schools the world on how Jesus is 'my lord and my savior/ watch him savor the flavor.'" I went on to encourage readers to check out "Wing," a hilarious and incisive satire of religion and religious iconography. Or maybe it's just a funny novelty song, like Clownvis' other tunes: "Barack O's Tacos," "Don't Be a Bitch (Or You Won't Get Stuff for Christmas)" and "Dancing with the Wolfman (In a Non-Gay Way)." And now I urge you to go see him perform at Rye, 'cause if he's half as crazy live as he is in his YouTube videos, it's gonna be a good time. (RH) Rye, 239 S. 500 East, 6 p.m., $12, sartainandsaunders.com

The Breeders
Kim Deal and Tanya Donelly each had critically lauded bands when they founded the Breeders in 1989. But the Pixies and Throwing Muses, as significant as they were to early indie rock (then called alternative rock), didn't have quite the same effect as this combo featuring Deal and her twin sister Kelley. The Breeders occupies its own unique niche; not quite the rarified atmosphere of Donelly's Muses or the Frank Black demagoguery of Deal's Pixies. There's something like the comfort of an old sweatshirt in The Breeders' music. Throughout a career spanning three decades on and off, the ladies of The Breeders have shown that women can hold their own in a hard-edged musical genre. All Nerve (4AD, 2018) might only be their fifth release, but it's already being touted as one of the best albums of the year. Nothing could match the groundswell of their first two albums, Pod (1990) and Last Splash (1993), with hits "Cannonball" and "Divine Hammer," but this show features the Last Splash lineup (no Donnelly), and they are bound to play some of those great tunes, as well as their new ones. Is it their last splash? Don't bet on it. (Brian Staker) The Complex, 536 W. 100 South, 7 p.m. (doors), $23 presale (plus fees), 21+, thecomplexslc.com

TUESDAY 4/17
Lincoln Durham, Ghost Wolves, Dealin' in Dirt
What with the likes of Th' Legendary Shack Shakers, Slim Cessna's Auto Club, Scott H. Biram, Amigo the Devil and a slew of similar acts out there serving up Southern-Gothic musical gumbo around the world, you've got to wonder if there's a saturation point on the horizon. It's artists like Lincoln Durham that allay such a concern. The SoGoth punk-blues-gospel musician and songwriter has proven himself a worthy contributor to the dark country genre. He wields a mighty fiddle (and banjo and guitar), obviously reads a lot (reading is, after all, fundamental, but he seems to prefer literature to pulp), which makes his songs a pleasure to analyze. Also, he clearly digs the dark stuff—I'd bet cash that he has everything Nick Cave and Tom Waits have ever put out. And here's wagering that plenty of us are pickin' up every Durham release, including his fourth and latest, And Into Heaven Came the Night. (RH) The Loading Dock, 445 S. 400 West, 6:30 p.m., $12 presale; $14 day of show, all ages, loadingdockslc.com 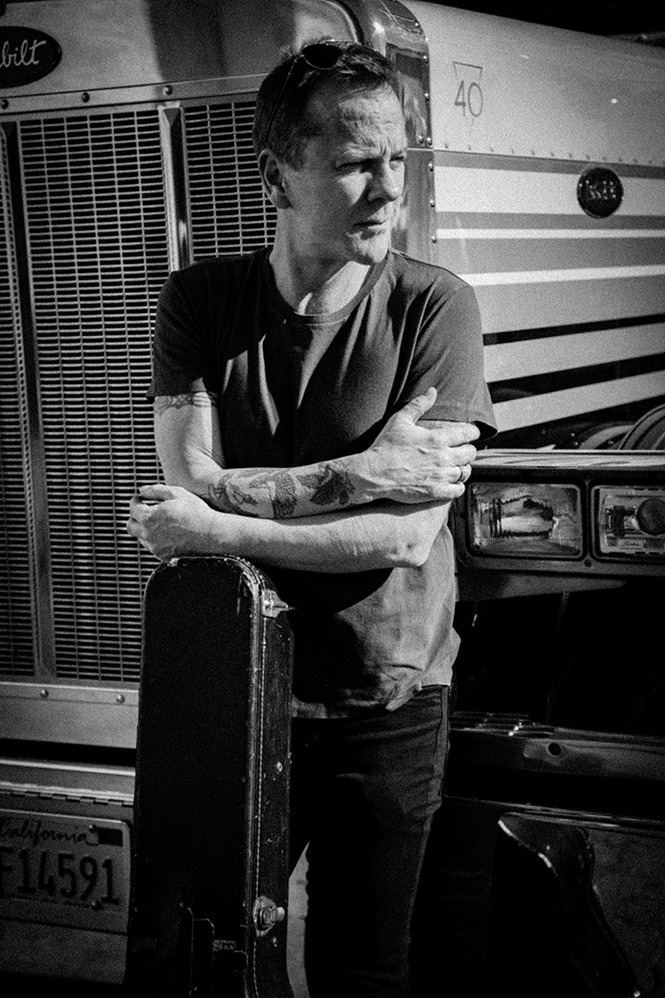 WEDNESDAY 4/18
Kiefer Sutherland, Rick Brantley
Wasn't this dude just here? Indeed, actor/musician Kiefer Sutherland performed at The Urban Lounge about 11 months ago. It could easily have been the first and last time that happened. As we've become conditioned to with so called "actor bands," the music is generally not that great, and such a creative tangent typically results in said thespian returning to his main thing. Not so with Sutherland, who wrote on Facebook last month, "I couldn't have imagined the depth with which I have fallen in love with touring. To have the opportunity to convey intimate, personal stories to an audience, for me, has proven to be priceless." A lifelong musician and longtime record label owner—he and his good buddy, singer-songwriter-producer Jude Cole, operate Ironworks Music (Rocco Deluca, Billy Boy on Poison, Lifehouse)—Sutherland has been waiting to drop his debut album for some time. Down in a Hole straddles the fence between country and classic rock, and it's surprised a lot of us critics who (for better and for worse) are accustomed to dismissing "actor bands" out of hand. That's possibly because of Cole's co-writes, but also because Sutherland judiciously didn't blow his musical wad at the height of his fame. Live, expect the show to smoke—partly because of Sutherland's whole smoldering thing, and partly because his touring band features guitarist Michael Gurley (dada) as musical director. (Randy Harward) Park City Live, 427 Main, 8 p.m. (doors), $25-$40, 21+, parkcitylive.net