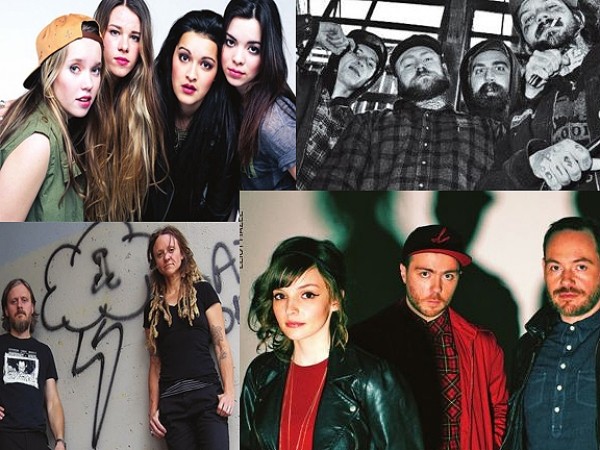 
As an audience-delighting act at significant local shows such as the Rooftop Concert Series—catch them this October when they play with Fictionist—and Velour’s Les Femmes de Velour showcase, The Blue Aces are one of the many talented bands currently blowing up in the Provo music scene. Combining anthemic guitar, emotion-filled lyrics and a genuine passion for their music, Cristal Ramirez—whose powerful lead vocals would give Grace Potter a run for her money—McKenna Petty, Katie Henderson and Alisa Ramirez play a stirring brand of pop-rock that’s full of high energy and a blast to witness live. At this show, the all-woman band will officially release their latest EP, Gave You My Heart; to get a taste for their new music, check out the music video for the new single “I Don’t Wanna Know,” a biting song about cutting a poisonous person loose and leaving them behind for good. Ocean Commotion and June Cat will provide support. (Kolbie Stonehocker)
Velour, 135 N. University Ave., Provo 8:30 p.m., $7, VelourLive.com

The Goddamn Gallows
“The Maker,” the titular track from The Goddamn Gallows’ brand-new full-length, kicks ass—and blackens some eyes, punches out some teeth and busts some ribs. What else did you expect from a band that has a song called “Y’all Motherfuckers Need Jesus” and a sound that’s as creepy as an overgrown boneyard behind a broken-down carnival? Taking Americana music styles like bluegrass and country, dousing them in moonshine and lighting them on fire with punk energy, the sound produced by the Detroit-based five-piece—they call it “gutterbilly”—is loud and fast, with lots of mandolin, banjo, accordion and high-octane evil. Make sure to check out their 2011 album, Seven Devils, which would be the perfect soundtrack to a murder spree. (Kolbie Stonehocker)
In the Venue, 219 S. 600 West, 7 p.m., $10 in advance, $12 day of show, InTheVenueSLC.com

J.D. McPherson
Listen to Broken Arrow, Okla., R&B/soul vocalist and guitarist J.D. McPherson for more than five seconds, and you’ll immediately begin to sway—no matter where you are. The musical roots of his throwback sound have been getting people moving since the ’50s, when pioneers like Little Richard and Buddy Holly lit the rock & roll wildfire. The former schoolteacher’s 2010 debut album, Signs & Signifiers, oozes retro charm and was even recorded on vintage equipment in a completely analog studio, but it’s not some dusty relic of the past. In McPherson’s online bio, he says, “I didn’t want to make a time-machine record, so we tried to make something relevant but with all the things we love about rock & roll and rhythm & blues and mesh it all together.” Check out “Fire Bug,” and don’t fight the urge to dance. The Hollering Pines will start the evening. (Kolbie Stonehocker)
The State Room, 638 S. State, 9 p.m., $20, TheStateRoom.com; limited no-fee tickets available from CityWeeklyStore.com

Callow
Technically, Callow formed in San Francisco in 2009, but Utah also gets to claim the band, since its two members are from Salt Lake City and Provo. Together, Salt Lake City native Red Moses and Provo native Sami Knowles create a sound that’s haunting, gritty and filled with ghostly vocal harmonies, perfect for cranking up during a solo road trip through the desert. They get a lot of sound out of the four hands and two voices between them, with Knowles taking on triple duty by playing percussion and keyboard and singing simultaneously. Moses’ guitar chords are spacey and droning, reminiscent of Spaghetti Western rock band Spindrift. The two albums Callow has released so far, Orb Weaver (2012) and Blue Spells (2013), are dark and spooky but ethereal and intangible at the edges, especially the songs “Black” and “Space Ghost.” Tavaputs and Ike Fonesca are also on the bill. (Kolbie Stonehocker)
Bar Deluxe, 666 S. State, 8:30 p.m., $5 in advance, $7 day of show, BarDeluxeSLC.com

Temples
With jangly tambourines, fuzzed-out guitar and droning keyboard effects, the time-tested sound produced by this neo-psychedelic foursome from Kettering, England, often gets compared to the Fab Four’s classic style. But Temples are quick to clarify that they’re more influenced by another ’60s band, The Byrds. “They’re hazier and more interesting,” says bassist/vocalist Thomas Warmsley in the band’s online bio. “The Beatles give too much away; the Byrds make you work hard. It’s that quest to learn more and discover more.” Temples have been getting buzz ever since they exploded the Internet with the 2012 release of their first song, “Shelter Song,” which was included on their shimmering, multi-layered debut album, Sun Structures, released in February. Light some incense, turn up “Sand Dance” and slip away. Drowners are also on the bill. (Kolbie Stonehocker)
The Urban Lounge, 241 S. 500 East, 9 p.m., $13 in advance, $15 day of show, TheUrbanLoungeSLC.com; limited no-fee tickets available at CityWeeklyStore.com

Chvrches
This indie electro-pop trio from Scotland draw inspiration from their shared love for ’80s music icons, and aims to produce “pop lyrics with meaning,” according to Pitchfork. Their cited influences, like Michael Jackson, Whitney Houston and Depeche Mode, are easily detected in the splashy anthem “The Mother We Share,” off debut album The Bones of What You Believe—released in September 2013. And lead vocalist Lauren Mayberry produces pop lyrics with depth, as in the multilayered track “Recover”: “And if I recover, will you be my comfort/ Honest in every way I know, you appear to face a decision you fear.” (Deann Armes)
The Depot, 400 W. South Temple, 8 p.m., $23 in advance, $26 day of show, DepotSLC.com

Fortunate Youth
Hitting No. 1 on the Billboard and iTunes reggae charts in 2013 with their second album, It’s All a Jam, Los Angeles five-piece Fortunate Youth brings passion and true talent to their island grooves. It’s All a Jam emphasizes friendship and the harmonizing power of herb with lyrics like “Peace love and unity/ You know it’s in my ganja tree/ So come smoke with me,” from the song “Peace Love & Unity.” Heavy on drumbeats, bass and keys, it’s impossible to keep your head from knockin’ to this easygoing music. Also impossible is tearing your eyes from the band members’ expressive faces as they perform, their tongues sticking out on occasion. True Press is also on the bill. (Carly Fetzer)
Lo-Fi Cafe, 445 S. 400 West, 9 p.m., $10 in advance, $15 day of show, Facebook.com/LoFiCafe