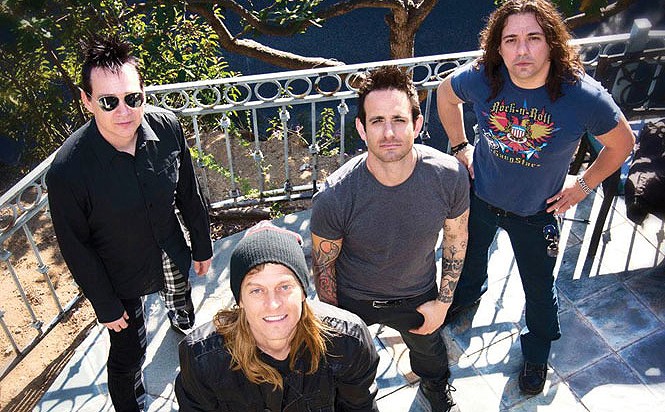 
Kansas City post-grunge rockers Puddle of Mudd—famous for their hits "Blurry" and the angsty "She Hates Me" off their 2001 release, Come Clean—have been working on new material: a full-length studio album, and a non-album single, "Piece of the Action." The new single has a Southern twang with an undercurrent of grunge, and while the verses hit closer to Come Clean than the band has in the last decade, the chorus is a faster, unexpected shift to classic rock. Salt Lake City country rock band Whiskey Fish opens. Sky, 149 Pierpont Ave., 7 p.m., $25 in advance, $30 day of show, SkySLC.com


The six Phoenix gentlemen who make up Jared & the Mill play Southwestern indie folk-rock with a tinge of country and bluegrass influence, complete with accordion, banjo and Zydeco rubboard (the iconic metal instrument that looks like an old-timey washboard). Their sophomore album—released April 14, a year and a half after their debut album, Western Expansion—is called Life We Chose. Both albums switch between upbeat and laidback rock with the occasional banjo-driven hoe-down throw-down, like in the title track (and some chord endings at the end of songs pulling up slightly in a subtle country twang). The band filmed a 25-minute documentary about their album tour, showing the relationship between Jared and his five heavily bearded bandmates, whose friendships have intertwined since they were young. California-born, Salt Lake City-based folk-rock artist Kaleb Hanly opens with his indie-folk compositions, from an album he released April 26 at Urban Lounge. The State Room, 638 S. State, 9 p.m., $13, TheStateRoomSLC.com 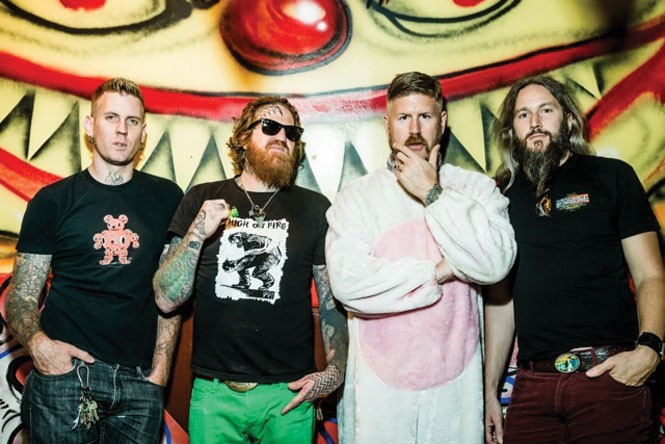 
The sixth full-length album from Atlanta progressive-metal band Mastodon, Once More 'Round The Sun, was born out of the idea of capturing a full year in the life of the band, during which time frontman Bill Kelliher got sober. At the time of the album's creation, the group had been considering a "full rotation, musically," according to the band's Facebook page. It is a musically complex album, as it attempts to parallel the ups & downs of life, with dynamic roars and lengthy riffs from Kelliher's 12-string acoustic guitar. They are joined on their "Missing Link" tour with Clutch—heavy rockers from Maryland with a Southern soul; growly, raspy vocals; and a penchant for eccentric funk and psychedelic blues. Clutch is releasing a follow-up to their 2013 album, Earth Rocker, which will be their 11th release. Energetic performances from Clutch have been known to spark chaos and mayhem. Swedish psychedelic/heavy rock band Graveyard, who released Lights Out this year, open. The Complex, 536 W. 100 South, 7 p.m., $29.50, TheComplexSLC.com


Some parties are tunefests, best experienced with eyes closed while swaying in place. That's how Urban Lounge may be tonight; Strong Words, an alternative-rock band out of Salt Lake City, is throwing a party for their sophomore, self-released album, There Is a River, There Is a Choice. The follow-up to last year's Come Clean features the same dreamy, hazy vocals from Cathy Foy (with Brian Lord and Jamie Richards on backup vocals), with almost-psychedelic rock and groovy bass rhythms. Lord and Fox's complementing guitar riffs in "Parting" are surf-pop-like, but with a calmness and restraint that gives the whole song a nostalgic feel. The final track, "The Inner Light Is a Violent Home," captures tension and traps it under a glossy, soft (and slightly atmospheric) soundscape, slowly escalating into the second part, which releases the pressure while holding on to the dark undertones. Fellow locals High Counsel, The 213s and Soft Limbs complete the lineup. Urban Lounge, 241 S. 500 East, 9 p.m., $5, TheUrbanLoungeSLC.com 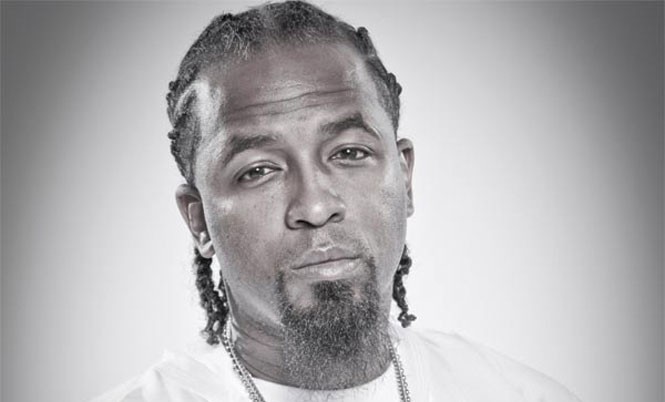 
Independent rapper Tech N9ne, from Kansas City, is promoting his newest album, Special Effects. The album plays with pace, from the mellow-bass lines in "Hood Go Crazy" and "On the Bible," (featuring T.I. and Zuse) to "Speedom," a single that features acoustic guitar riffs and energetic verses from Eminem and Krizz Kaliko that are spit so fast that they sound almost like gibberish, if you aren't listening close enough—and it's hard to listen close enough. Guests Krizz Kaliko, Chris Webby, Murs, King 810 and Zuse are joining in the lineup. (Tiffany Frandsen). The Great Saltair, 12408 W. Saltair Drive, May 2, 7 p.m., $34 in advance, $38 day of, TheSaltair.com 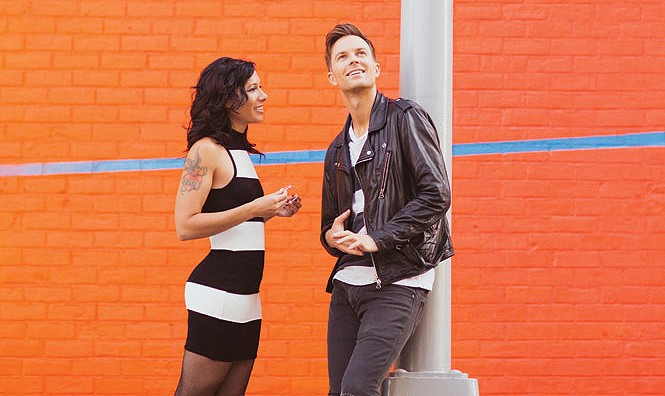 
Known for their eccentric, enthusiastic live show antics, pop/indie-dance duo Matt & Kim—touring to promote the fifth studio album, New Glow—have been known to deliver concerts that include sing-alongs, '90s hip-hop dance breaks (like from the master, Dr. Dre), playful banter between the two (who met as art students at Pratt Institute in New York) and energetic dancing/crowd-surf-twerking from drummer Kim Schifino. The sound itself is pop music made by two people with a love for hip-hop beats and dance music, like an indie-pop take on EDM. Tracks are still as hook-heavy as when they started, with the catchy earworm "Daylight" (off of Grand) one of the first hits to get real traction. The new album embraces more hip-hop, with infectious club beats running through "Stirred Up" and "Get It," lightened up by the fun, happy pop and Matt Johnson's distinctive vocals. Since concerts can be only so long, the duo continues the party in their music videos, which generally show off their outrageous dance moves (and in "Lesson Learned," shows off quite a bit more than that; they strip down from winter coats in Times Square completely naked). The newest on the video scene from these two is the upbeat track "Can You Blame Me." It's crowd-sourced and interactive; fans record their own versions while holding a tablet in front of their face that is playing either Matt or Kim's face singing, playing off the examples the duo themselves recorded at a party, Matt on a golden bicycle and Kim on the toilet. San Francisco rock band Waters kicks off the concert featuring songs from their new album, What's Real. The Depot, 400 W. South Temple, 7 p.m., $20 in advance, $23 day of show, DepotSLC.com 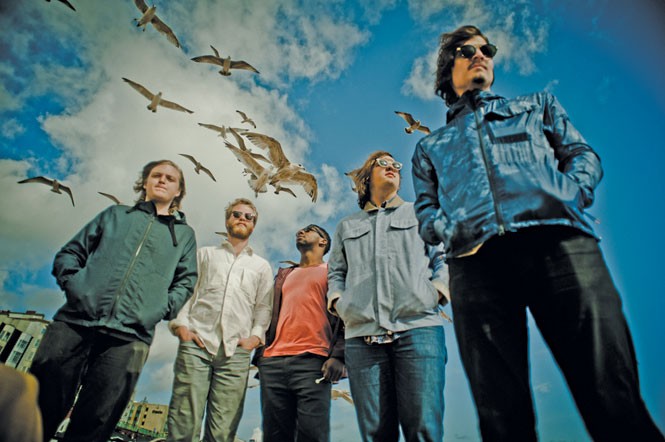 
Indie-rock-from-Oxford (Mississippi) band Young Buffalo have the spirit and drive that get into your shoes, run through your bones and insist that you dance. The vocals from Ben Yarbrough (with harmonies from backup singer Jim Barrett) are pretty, but the rest of the sound is pure rock: Drummer Tim Burkhead gets plenty wild with creative and loud rhythm and syncopation. Playing together for a decade—though only since 2009 under the Young Buffalo name—they just released their debut full-length album, House, a decade-in-the-making collaboration (after cutting their recording teeth on two EPs and a handful of singles). Headliner Matt Pond PA (who moved from Pennsylvania to New York—yes, that's where the PA comes from) is touring both Several Arrows Later for its 10th anniversary, as well as the upcoming release, State of Gold. Velour, 135 N. University Ave., Provo, 8 p.m., $12, VelourLive.com