by Zac Smith and Randy Harward

FRIDAY & SATURDAY 8.12-13
Women's Redrock Music Festival
The tiny southeastern town of Torrey is an unlikely place for an event celebrated as Utah's "Best Place for Women to Meet Women" (City Weekly's Best of Utah 2013). Yet hundreds of festivalgoers—mostly women—make the annual trek from all over the state and beyond for a whimsical weekend of intimate performances by independent female musicians in the charming, picture-perfect setting, and the local restaurants and bars warmly welcome them like family. The nonprofit, volunteer-run effort commemorates its 10th anniversary with a stirring 2016 lineup: kickass Alabama singer-songwriter Kristy Lee, who has earned a place on stage next to artists like Michael Franti and the Indigo Girls; beloved folksinger/songwriter/comedian and intoxicating story-teller Cheryl Wheeler; rock foursome Hunter Valentine (with standout lead vocalist Kiyomi McClosky, who appeared on the third season of The Real L Word); and '80s-influenced pop-rock quintet Sick of Sarah (whose catchy tunes are reminiscent of Tegan and Sara). That's not to mention some of the excellent local acts they've booked, like Sister Wives, Canyons and The Debi Graham Band. The two-day festival also offers hiking in the nearby Capitol Reef National Park, morning yoga and a songwriting workshop. (Deann Armes) Robbers Roost, 185 W. Main St., Torrey, $50-$100, WomensRedrockMusicFest.com

SATURDAY 8.13
God's Revolver, Temples, Red Bennies, Mañanero
Hailing from the unlikely locale of Provo, God's Revolver has appeared at Crucialfest, and is on fest founder Jarom Bischoff's Exigent Records label. Their western-tinged heavy music reminds me of the Tarantino-produced gonzo Western flick Hell Ride, and their songs have titles like "Drown Your Fucking Sorrows," "Scratch Dealt Me a Dirty Hand" and "Iron Fuck." Red Bennies—need I even offer words in explanation of Salt Lake's most legendary, and one of the longest-lived, art-punk bands? Singer/guitarist David Payne is nerdy to the extent that he could unabashedly sing "Could I Have Your Heart to Break, Please?" and not sound any less punk. Not to be mistaken for the English band of the same name, Temples brings instrumental washes of sound that defy whatever post/math/psych appellative you might attempt to append. Mañanero is Douglas "Chopper" Styer, guitarist in many local bands over the years, now exploring his folky side with this solo project. He's also received his due for his role in the local scene, with Squatters' new Squasatch beer featuring him on the label. This evening is a four-pack of local bands with bite. (Brian Staker) The Urban Lounge, 241 S. 500 East, 8 p.m., $5, TheUrbanLoungeSLC.com

Brandi Carlile, Blind Pilot
If you owned a TV in 2007 or 2008, you probably heard Brandi Carlile's instantly memorable breakout "The Story" in a good chunk of the commercial breaks. The Seattle singer-songwriter's impressive output since then might not sell a lot of cars these days, but Carlile's hypnotic voice—a sweetened snarl with a slight weathered smokiness—always sounded jarring coming from such a young performer, not to mention the song's mention of "lines across my face." Carlile is a bit older now, but she's aging well. Her sixth album, 2015's The Firewatcher's Daughter, is markedly different from the slightly slicker production of her previous albums. This time around, Carlile recorded on the spot, with hardly any demos beforehand, and it turns out "messy" works much better for her. Carlile continues her embrace of Americana balladry, but each scream and crack in her voice now feels earned. (Kimball Bennion) Deer Valley Resort's Snow Park Outdoor Amphitheater, 2250 S. Deer Valley Drive, Park City, 5:30 p.m. (doors), $42-$75, DeerValley.com 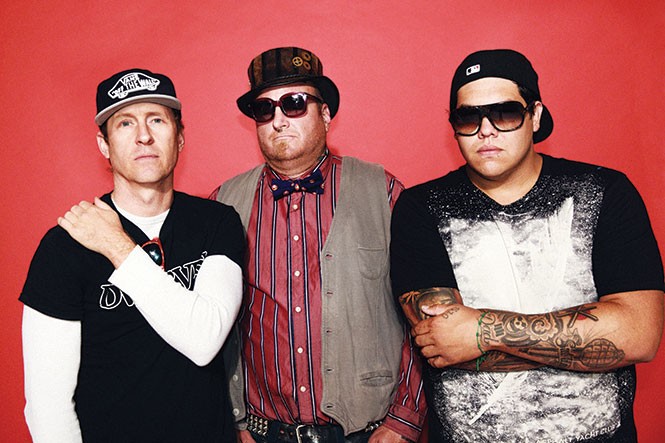 SUNDAY 8.14
Reggae Rise-Up: Sublime with Rome, Dirty Heads, Tribal Seeds
This year's Reggae Rise-Up Festival is jam-packed with reggae-playing colossuses Sublime with Rome, Dirty Heads and Tribal Seeds. Sublime with Rome, formed out of the remnants of Sublime after the death of lead singer Bradley Nowell, is a collaborative effort between Sublime bassist Eric Wilson, and guitar-smith Rome Ramirez. Sublime with Rome plays Sublime's hits along with songs from their own releases, 2014's Yours Truly, and 2015's Sirens. Dirty Heads' founding members "Dirty J" and "Duddy B" met at a party, so it's fitting that the Dirty Heads' signature brand of Orange County, Calif., hip-hop and ska-punk embodies such an ecstatic joy, no more so than on 2016's Dirty Heads. With cool Californian spirituality, Tribal Seeds will keep the show grounded and lifted. Great sounds, positive vibes and a thick cloud of lingering smoke—what could be better? (Zac Smith) Utah State Fairpark, 155 N. 1000 West, 1 p.m., $40-$70, UtahStateFairpark.com

MONDAY 8.15
Trampled By Turtles, Lord Huron
Remember that phase in college when you dressed like a lumberjack and one-upped your buddies with insights about craft brews while hanging out at Trampled By Turtles shows? Well, your friends have all moved on to swilling rosé and calling a time they ate at an OK restaurant an "experience." But the Trampled By Turtles part doesn't have to change. It's time to dig out that flannel shirt of yours (don't worry, it still fits) and let the Turtles' dulcet mandolin melodies take you back home. Just like a good broken-in pair of L.L. Beans, the Duluth indie-bluegrass outfit has always been there, ready for when you're down for another romp in the dirt. You'll find they've only gotten better over time. Trampled By Turtles have been at it for 13 years, continuing an impressive streak of performances that combine great stories with truly virtuosic bluegrass instrumentality. (KB) The Complex, 536 W. 100 South, 6:30 p.m. (doors), $30 (plus fees), TheComplexSLC.com

FRIDAY & SATURDAY8.12-13
Das Energi Festival
Smiles: Acceptable. Bad vibes: Prohibited. These are just a few of the requirements for the fifth annual Das Energi Festival. Headliner Tiësto was born in the Netherlands in 1969. In the early '90s, he began releasing music under aliases Da Joker and DJ Limited. With the release of his 2001 album, In My Memory, Tiësto began his steady rise to electronic domination, and 2014's A Town Called Paradise found himself at his most versatile. Co-headliner Dillion Francis is a well-known DJ and internet celebrity discovered by Diplo, with whom he collaborated ("Que Que") before breaking out with his solo hit "Masta Blasta." Supporting artists Gareth Emery, Marshmello and Wolfgang Gartner will set the weekend's "energi" high. (Zac Smith) The Great Saltair, 12408 W. Saltair Drive, Magna, 5 p.m., $70-$200, 18+ w/ID, TheSaltair.com

TUESDAY 8.16
Zakk Wylde, Tyler Bryant & the Shakedown, Jared James Nichols
When Ozzy Osbourne tapped Zakk Wylde to replace departed guitarist Jake E. Lee, he became a heavy metal legend known for his black-and-white bullseye Les Paul and screeching harmonics. Wylde, however, is actually fluent in many musical flavors—typically derivations of metal, from the bluesy satanic sludge of Sabbath to his Southern-tinged unit Black Label Society to his own grinding solo work. He's touring behind Book of Shadows II (Entertainment One, 2016), the sequel to his popular solo release from 20 years ago. It again finds him exploring sometimes-dark themes with fleet fingers ... and a bottle of black label hooch. With Tyler Bryant & the Shakedown, Jared James Nichols. (Brian Staker) The Depot, 400 W. South Temple, 8 p.m., $30 in advance, $35 day of show, DepotSLC.com