THURSDAY 8/22
Felix Cavaliere's Rascals
As the mainstay of the group that began life as an upstart ensemble originally dubbed The Young Rascals, Felix Cavaliere has every right to claim the Rascals name as part of his handle, despite the fact that the last full Rascals reunion was in 2013. After all, he contributed to the vocals and organ that gave the group their singular soulful sound, one that distinguished them from the British Invasion bands that preceded them in chart success. Indeed, the Rascals were early champions of a genre that came to be known as "blue-eyed soul," delivering a steady string of hits circa 1966-67: "How Can I Be Sure," "A Beautiful Morning," "People Got To Be Free" and "Groovin.'" While Cavaliere has kept the band's memory alive on tour, his solo albums have dug deep into the R&B firmament, most significantly when he recorded the aptly titled Nudge It Up a Notch with legendary guitarist and Stax sideman Steve Cropper. With a keyboard style that borrows heavily from influential organist Booker T. Jones, he maintains that soulful stance that earned him and the Rascals induction into the Rock & Roll Hall of Fame, as well as recognition from the Songwriter Hall of Fame, Vocal Group Hall of Fame and Grammy Hall of Fame. At age 76, Cavaliere's still "groovin'" and encouraging the rest of us to do the same—something everyone should have time to do with a four-day stretch at the Egyptian. (Lee Zimmerman) Egyptian Theatre, 328 Main, Park City, $43–$53, Aug. 22-24, 8 p.m.; Aug. 25, 6 p.m., all ages, egyptiantheatrecompany.org

FRIDAY 8/23
Drab Majesty, Xeno & Oaklander, Body of Light
While hip-hop gets heaps of credit for introducing mainstream audiences to mixed genres (hello, Lil Nas X), outsider pop music has been a force for change for 40-plus years. Intergalactic duo Drab Majesty continue to push the envelope by mixing gothic folk and icy darkwave, a combination they've perfected on fresh new full-length Modern Mirror. The atmospheric eight-song album mixes reverb-drenched, fingerpicked guitars with ghostly synths and crystalline snares, creating a hallucinatory form of art-pop that perfectly matches the androgynous, surreal style of Deb Demure and Mona D, the noms de guerre of Andrew Clinco and Alex Nicolaou. Studio backstories can often be a bore, but Drab Majesty soar above the fray with the tale of Modern Mirror. After picking up cues from past tour mates as disparate as Smashing Pumpkins and Deafheaven, Deb and Mona decamped to Athens, Greece, to write and record their third record, channeling the sun-kissed landscapes of the here and now and iconic myths from millennia past. Reflecting and reinterpreting the classic story of Ovid's "Narcissus," about a man so full of himself he dies staring at his own reflection, Modern Mirror's eight songs chart a path through dissociation and heartbreak. The main character (or, perhaps, the listener) loosens the ties that bind the self, chasing a heartless, digital version of love and intimacy that proves to be devastatingly destructive. If it all sounds too high-minded, don't worry: Drab Majesty's emotional synth-pop is surprisingly immersive and danceable. The minimalist electronica and cinematic pop of Xeno & Oaklander and Body of Light set the stage for a revelatory evening. (Nick McGregor) The Urban Lounge, 241 S. 500 East, 8 p.m., $15, 21+, theurbanloungeslc.com

FRIDAY 8/23
UB40 40th Anniversary Tour
In the mid-1970s, England was suddenly overtaken by reggae fever. With Chris Blackwell's Island Records label leading the way, the Brits made stars of such emerging artists as Bob Marley, Toots and the Maytals, Jimmy Cliff and a host of other Jamaican musicians who pioneered the first reggae wave. It was only natural, then, that several homegrown acts would follow their lead. UB40 was among the most successful of the bunch, as proven by their dozens of hits at home. The biggest of all was a pumped-up cover of Neil Diamond's "Red Red Wine," which became a chart staple for a remarkable 100 weeks in a row. Specializing in revamped cover tunes, they continued to find extraordinary success worldwide, becoming the recipients of four Grammy nominations for Best Reggae Album, a Brit Award nomination for Best British Band, England's Heritage Award and international sales of more than 70 million records in the process. The diverse background of the original lineup was also striking, and given the cultural clashes of the present day, it still seems so. The departure of original vocalist Ali Campbell in 2008 led to a struggle over rights to the name and inevitable court proceedings, but today, five of the six members of the seminal lineup still carry on under the UB40 banner. Likewise, the band's devotion to ska, reggae, pop and the combination thereof remains essential to their signature sound. Be prepared to get in the groove, the effects of red, red wine aside. (Lee Zimmerman) Dejoria Center, 970 N. State Road 32, Kamas, 8 p.m., $35–$95 dejoriacenter.com

SUNDAY, 8/25
Starover Blue, Kambree
Starover Blue's latest single "Anemone," from August 2018, could be such a loud song. Its pop synth and airy vocals feel like they could punch through at any moment and become a boisterous ballad, but Starover Blue chooses instead for a gentle and subdued energy. It's emblematic of the groups' discography, which spans one full length album (Spacegeist, 2016) and an EP (Moneystealer, 2017). The group consistently chooses to bring an energy that feels like it's on the cusp of becoming loud, but never quite does. As a result, it's comforting music, in the sense that it's easy to digest and that it's gloriously cheerful. Even as it dips into melancholic moments, there's always a bright chord progression to bring you back. The nearly six minute "No Crying in Baseball" from Moneystealer starts with only a light synth, guitar and those airy vocals, but by the song's end, we end up in a somewhat loud place, one that's earned with a welcome swell of drums. When Starover Blue reach these precious loud moments, you can't help but feel like you've earned it, too. To contrast, local Provo band Kambree brings purposefully loud, thrumming pop rock that in no way shies away from earnestness. Baby Days was released this July, so this show should be full of fresh tracks. While I doubt Starover Blue will seem like a downer after the kind of energy Kambree boasts, it'll be a marked tonal shift for the night. (Parker S. Mortensen) Kilby Court, 748 S. Kilby Court, 7 p.m., $7, all ages, kilbycourt.com 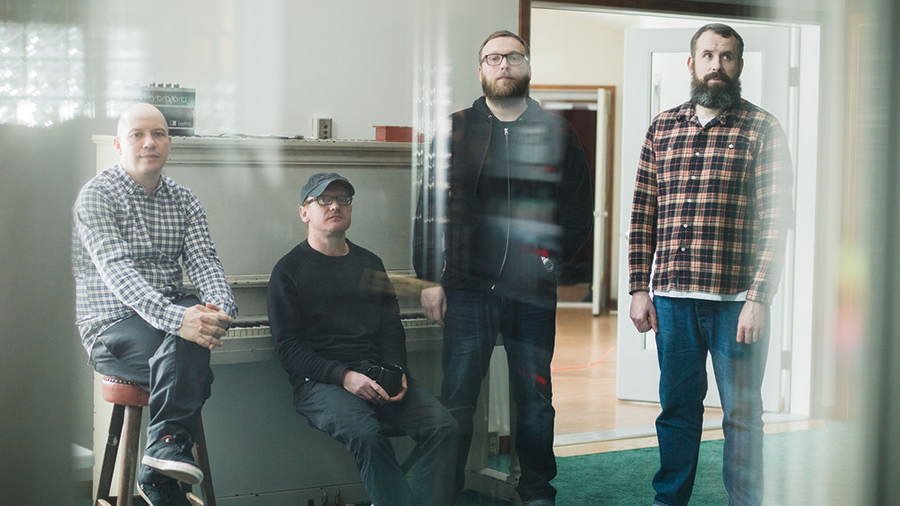 TUESDAY 8/27
Mogwai, David Pajo
Post-rock is a genre with varied access points, drawing fans of various genres into the fold via various types of artists. Metalheads might find themselves enraptured by Boris' crushing wall-of-sound approach; punks tend to gravitate toward the scrappy abrasion of Slint; even Top 40 junkies can appreciate Talk Talk's patient deconstructions of new wave and synthpop. For the indie rock set, Scotland's Mogwai (along with their Canadian contemporaries Godspeed You! Black Emperor) is the perfect gateway drug into the vast world of post-rock. However, Mogwai operates with a self-aware sense of humor that stands in stark contrast to GY!BE's cerebral, occasionally po-faced sensibilities; not many bands in their vein would have the guts to open their debut album with an audio clip of a girl reading off a gushing review of their own live performance ("Yes! I Am A Long Way From Home"). Still, that doesn't mean Mogwai skimps out on the shamelessly pretty soundscapes post-rock is known for. On classic cuts like "Mogwai Fear Satan" and "Hunted by a Freak," as well as more recent material like "Brain Sweeties," the band generates unexpected beauty, combining Pixies-esque dynamics with shoegazey melodic sensibilities, blowing both up to cinematic proportions. Mogwai comes to SLC joined by post-rock veteran and former Slint guitarist David Pajo. (Nic Renshaw) Metro Music Hall, 615 W. 100 South, 7 p.m., $25, 21+, metromusichall.com

WEDNESDAY 8/28
The Mountain Goats, Lydia Loveless
In the twilight years of the 20th century, John Darnielle—under the moniker The Mountain Goats—clawed his way to indie stardom through sheer, unbridled songwriting talent, all filtered through a wall of lo-fi tape hiss. Darnielle spun countless yarns of love, loss, addiction and redemption that eventually culminated in his 2002 magnum opus All Hail West Texas. Since the release of AHWT, Darnielle has cleaned up and fleshed out The Mountain Goats' sound substantially, and at this point, they're a full four-man band on a respected indie label. However, just because they're a bit more polished and accessible doesn't mean albums like Get Lonely or The Sunset Tree don't showcase every bit of the razor-sharp wit and writerly attention to detail that garnered the Goats one of the most devoted fandoms in indie. Recent years have seen Darnielle move toward a more album-oriented approach—2012's Beat the Champ was inspired by his lifelong love of professional wrestling and 2017's Goths was a series of snapshots documenting the rise and fall of '80s goth culture. Mountain Goats live sets are famously engaging affairs, with Darnielle often prefacing songs with long anecdotes about their origin or meaning, and Salt Lake will be treated to just such a set as part of their nationwide tour in support of their newest release, In League With Dragons. Ohioan alt-country singer-songwriter Lydia Loveless opens. (NR) Metro Music Hall, 615 W. 100 South, 7 p.m., $25, 21+, metromusichall.com