by Kathleen Stone and Randy Harward 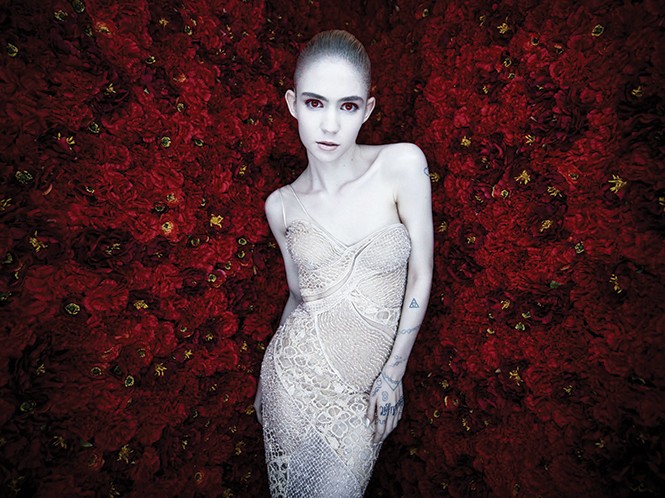 THURSDAY 8.25
Grimes, Jagwar Ma, Elytra
On Grimes' latest album, Art Angels (4AD), she flows from growling to choral high notes to rapping in each song. Like her music, she's complex. Unapologetically feminine and badass at the same time, her lyrics are sassy yet vulnerable, and her career is a testament to independence: She's signed to Jay-Z's management company, records for the venerable major indie-label 4AD, and produces her own music. Her current single "Medieval Warfare" (Suicide Squad soundtrack) starts off like something written for Coma the Doof Warrior, the flamethrower-guitar player from Mad Max: Fury Road (played by real-life Australian shredder iOTA), then materializes as a pulsing electronic Die Antwoord-influenced anthem for independent women. Don't miss her openers: Aussie duo Jagwar Ma plays pop music with a Tame Impala twist, and Elytra—founded by local music mainstay Lindsay Heath—bends genres and genders. (Kathleen Stone) Pioneer Park, 350 S. 300 West, 7 p.m., $5 advance/$10 day of show, TwilightConcerts.com

THURSDAY-SATURDAY 8.25-27
The Box Tops
Although I've heard The Box Tops' 1967 hit "The Letter" a zillion times, I'd never seen a clip of the Memphis band performing it until just now. Pretend we're hanging out. Bring up YouTube on your smartphone and search for the clip from the old TV show Upbeat. That's Alex Chilton—the man behind power-pop luminaries Big Star—singing. Doesn't he resemble a young and not-so-twitchy Eddie Money? Check out the bored-intense look in his eyes. He looks like ennui will drive him to murder—or maybe he's simply determined, like the song's protagonist, to reunite with his lady, who wrote him an email or something. It's hard to tell. The dude only smiles in the parts of the video that don't sync up. Anyway, Chilton passed away in 2010, but original members Bill Cunningham and Gary Talley keep the band—and its other hits, like "Soul Deep" and "Neon Rainbow"—alive. (Randy Harward) The Egyptian Theatre, 328 Main, Park City, 8 p.m., $23-$45 ($5 more within 30 minutes of showtime), EgyptianTheatreCompany.org

Lost '80s Live: A Flock of Seagulls, Wang Chung, Nu Shooz, Animotion, Cutting Crew, Naked Eyes, Farrington & Mann the Original "When in Rome UK"
I remember seeing, years or even decades ago, soul revue shows on TV where old Motown or Stax artists would parade in front of a house band, play their hits and split. I've often wondered if that'll happen with the music of (activating wheezy Grandpa Simpson voice) my daaaaayyyy. It's not necessarily transpiring with Lost '80s Live, but it's close. Each of these bands jumps straight out of your memories and/or multi-disc '80s pop compilations and plays only their hits. No plugging new material, no deep cuts—just the hits. Which is fine, 'cause it's rare that, "Here's one from our new album," precedes goodness. It's usually just a cue to cheer politely, followed by a so-so tune that's either derivative of past hits, an indulgent departure or a desperate bid for fresh success—followed by an invitation to visit the merch table. So seven bands, splitting, one reckons, three hours of stage time? That amounts to some pretty short sets. Attention spans being what they are nowadays, that's kinda perfect. It'll be like a physical manifestation of the block party weekends we used to hear on our transistor radios in those Day-Glo summers of yore. (RH) Sandy Amphitheater, 1245 E. 9400 South, 7 p.m., $30-49, SandyArts.com/Sandy-Amphitheater

WEDNESDAY 8.31
Rose's Pawn Shop, Millie and the Moths
The past decade has blessed us with no shortage of alt-bluegrass revivalists, but there's something about Rose's Pawn Shop that feels fresh and inventive. Named after an experience when a jilted lover pawned frontman Paul Givant's musical instruments, Rose's Pawn Shop is no stranger to country-style heartbreak. The Los Angeles-based band channels twangy banjos, wispy mandolins and screeching fiddles into high-energy pub songs and low-key ballads. Over the course of their 10-year run, they've recorded and released three records. Their most recent, Gravity Well, was produced and mixed by Ted Hutt (Dropkick Murphys, Old Crow Medicine Show). Local folk-punks Millie and the Moths open for an evening of acoustic guitars, vocal harmonies and melancholy introspection. (AS) Kilby Court, 741 S. 330 West, 7 p.m., $10 in advance, $12 day of show, KilbyCourt.com