"Good evening. We are Motörhead ... and we play rock & roll," says singer/bassist Lemmy every time the eminent British power trio plays. Then it gets loud. The breakneck, rumbling ruckus coming from the stacks of Marshall amps—you feel it in your gut, to the extent that you wonder if you're a song away from incontinence. Those who eschew earplugs risk hearing loss. Well, considering Lemmy drank a bottle of Jack Daniels daily for more than three decades, and smoked enough cigs to circle the world thrice (estimate)—yet looks pretty much the same as he did in Circus or Hit Parader back in the '80s, you can tolerate an earache and bubble-gut. After all, Lemmy is 69 years old, has diabetes and rocks a defibrillator, and he still gets up there and crushes it. The new album is called Bad Magic (UDR/Motorhead Music), and it features a guest solo from Queen's Brian May ("The Devil") plus a cover of the Rolling Stones' "Sympathy for the Devil." Joining Motörhead are Saxon, who were at the vanguard of the late-'70s/early '80s new wave of British heavy metal—and also defy age and deliver the goods. They'll release Battering Ram (UDR) in October. Pennsylvanian fuzz-rockers Crobot open. (Randy Harward) The Complex, 536 W. 100 South, 6:30 p.m., $35 in advance, $40 day of show, TheComplexSLC.com 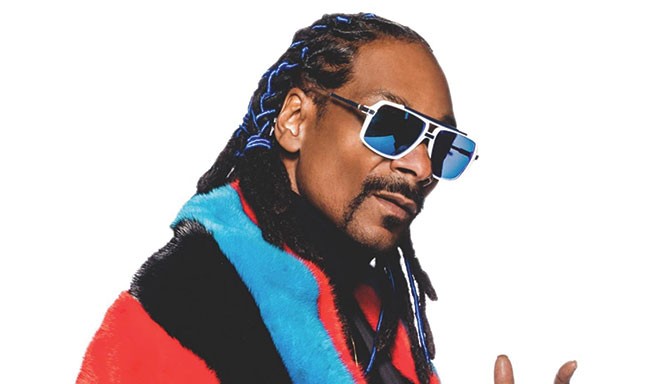 In May 2015, Snoop Dogg released Bush (Columbia/Doggystyle), which may refer to pleasures both carnal and, let's say, medicinal. It's supposedly Snoop's last solo album as Snoop Dogg—the rest will be under Snoop Lion, Snoopzilla/7 Days of Funk and DJ Snoopadelic. The odd thing about Bush, however, is that, if it's his final bow under his original stage name, it's not even a hip-hop record. It's pop, flavored with funk—which is Snoop's dominant influence lately. There's more singing (mainly from Gap Band leader Charlie Wilson) than rapping, even. But it works. From the first strains of the opening slow jam, "California Roll," you wanna take Bush out for a sunny drive—and let it play through the night. Now, although Snoop is on to other things, there'll be no shortage of beats and rhymes tonight. Your boys Atmosphere are on the bill, touring behind last year's Southsiders (Rhymesayers). So is albino rapper Brother Ali, who's still riding high on Mourning in America and Dreaming in Color (Rhymesayers, 2012) and the Left in the Deck EP. Finally, long-running underground trio Dilated Peoples will be there supporting Directors of Photography (guess which label). But of course, with Snoop being the headliner, you can expect to hear him spit plenty—and cough up the obligatory party anthem, "Gin and Juice." (Randy Harward) Usana Amphitheatre, 5200 S. 6200 West, 3:30 p.m., $35-60, limited tickets available at CWStore.cityweekly.net, Usana-Amp.com

The Get Up Kids, Josh Berwanger, The Hotelier

The much-maligned emo genre wasn't always so yucky. It started in the 1980s with Rites of Spring and led to the beloved post-hardcore band Fugazi, whose Ian MacKaye formed his own emo band, Embrace. Plenty of cred and substance, there. Likewise, with late-90s/early 2000s genre leaders Jawbreaker, Sunny Day Real Estate, The Promise Ring ... and The Get Up Kids. They all played a poppier, prettier strain of punk that was emotional but sincere—and smart. The ensuing bandwagon overflowed with whiny, insubstantial scene-haired bands, prompting Get Up Kids guitarist Jim Suptic, speaking to Drowned in Sound in 2009, to apologize for influencing them. Apology accepted. Josh Berwanger, who led another noteworthy emo band, The Anniversary, opens along with The Hotelier. (Randy Harward) The Urban Lounge, 241 S. 500 East, 8 p.m., $18 advance/$22 day of show, TheUrbanLoungeSLC.com

If anyone's counting, it's been seven years since we've had new music from Eagles of Death Metal. That's enough time to forget why you liked a band in the first place. "Complexity," the first track on the duo's fourth album, Zipper Down (Downtown), reminds you in less than 30 seconds. If Jesse Hughes and Josh Homme (Kyuss, Queens of the Stone Age) are ever gonna have a full-on hit, it'll be this sassy hip-shaker, with its groovy fishhook of a bass line, sing-along lyrics and ridiculously fun Hairspray vibe. In fact, like every other EODM album, the whole of Zipper Down is an absolute boogie-down riot, mixing classic rock with big beats and a stoner-ly metal attitude. Opening for EODM tonight is French-Dutch duo Sinner Sinners, whose third album XI (SinnerSinners.Bandcamp.com) mines the hard rock and punk rock in the same fast, furious, fist-pumping vein as esteemed Norwegian dirtbags Turbonegro. Expect to leave this show sweaty. (Randy Harward) In the Venue, 219 S. 600 West, 7:30 p.m., $20 in advance, $22 day of show, IntheVenueSLC.com

From the bright "Maybe Tonight" on Neptune City (Red Ink/Columbia) and the smoky "We Wait Too Long" (which samples the Kaiser Chiefs' "Ruby") on her 2014 release, Slow Phaser (Oh Mercy!), to the moody "Vultures" from Mondo Amore (Razor & Tie), pop-noir singer Nicole Atkins' discography traverses sultry late-evening sounds and daytime danceable tunes. Her lyrics are clever and wryly opinionated; the mockery extends to modern country music (the thus far unrecorded "As Country Was") and hipsters alike ("Cool People"). She's a charismatic, slightly bluesy performer; for a preview of her quirky and fun personality, check out her music video for "Girl, You Look Amazing," in which she goes on a date with ... no one—but that does not stop her from laughing, conversing, dancing and saying a seductive goodbye. (Tiffany Frandsen) Blues, Brews & BBQs Festival at Snowbasin Resort, 3925 Snowbasin Road, Huntsville, 4:30 p.m., free, Snowbasin.com

The Melvins are one of those bands that loom larger than life—from their promethean sound to singer King Buzzo's topiary explosion of hair, as emphatic as an extended middle digit. Categories/genres/epithets like grunge, metal or stoner rock are too flimsy to contain them—yet they are illustrative, as though the Melvins envelope the musical labels, instead of the other way around, and dwarf those contained therein. In "Hooch" from their epochal Houdini (Atlantic, 1993), Buzzo even seems to invent his own language. Their latest release, 2014's Hold It In (Ipecac) finds them pared down to a three-piece, yet still cranking it up on songs like "Bride of Crankenstein." Openers Big Business features Melvins drummer Coady Willis. (Brian Staker) The Urban Lounge, 241 S. 500 East, 8 p.m., $15 in advance, $17 day of show, limited tickets available at CWStore.cityweekly.net, TheUrbanLoungeSLC.com

It's a poorly kept secret that up-and-coming musicians make most of their money from concert-ticket sales. So, it comes as a surprise that The Maine, a power-pop quartet from Tempe, Ariz., announced their "Free for All" fall tour, where tickets are free (first-come, first-served). And why not? Although their albums have been progressively well-reviewed—particularly their latest, American Candy (Warner Bros.)—they haven't scored a hit single or charted above the low 30s on the Billboard Top 200. They get by thanks to the loyal following they've amassed touring with acts like The Academy Is... and The Cab. These free shows are a thank-you to them, and the band plans to be accessible after shows for signings. (Robby Poffenberger) Club 50 West, 50 E. Broadway, 6 p.m., free, 50WestSLC.com