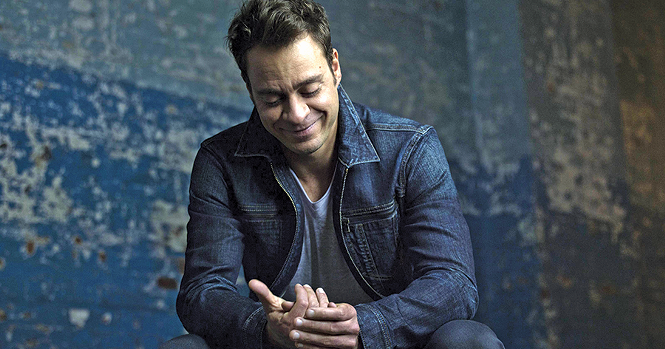 THURSDAY 8/29
Amos Lee, Madison Cunningham
Amos Lee has always managed to pursue his own muse. After landing a major label recording contract early on, he was tapped to open on tour for Norah Jones, raising his profile almost immediately. Now, seven critically acclaimed albums later, he touts an ever-growing audience of ardent admirers who are drawn to his rich, rugged narratives from the perspective of an observer with a genuine affection for the people and places described in his songs. His tattered tales celebrate the human spirit and its determination to overcome adversity. Much like The Band, Bob Dylan, Paul Simon, Van Morrison and John Prine, Lee pulls no punches. His weathered and weary descriptions of ordinary folks forced to come to grips with life's difficulties strike a universal chord. "When I'm performing, I like to communicate through songs, because it feels more like a distillation of clearer ideas for me," Lee once told this writer for the Maryville Daily Times. "That's why I mostly like to speak through my music." He does that well, and it's hard not to be affected by the stories he shares. His melodies and metaphors are evocative and inspired; as a former schoolteacher, he acquired his literary prowess as the result of teaching that skill. "I'm working for the audience," he said. "I want to make that experience human and real." That's not only an ideal way of summing up his sentiments, but also a very real measure of success. (Lee Zimmerman) Red Butte Garden Amphitheatre, 300 Wakara Way, 7:30 p.m., Thursday, $45, all ages, redbuttegarden.org

FRIDAY 8/30
Molly Burch, Jackie Cohen
The first thing most people notice about Molly Burch is her voice. Smoky, effortless and ineffably cool, Burch honed her instrument in the University of North Carolina-Asheville's Jazz Vocal Performance program. But it's Burch's way of modernizing lounge jazz and romantic balladry that has deepened fans' affection for her. On her 2017 debut album Please Be Mine, she and her backing band delivered a minor miracle, turning hushed, fingerpicked songs about unrequited love into emotional powerhouses full of roiling energy. On the 2018 follow-up First Flower, Burch reaches even deeper into her own psyche, navigating fractured friendships and debilitating anxiety while embracing her own withdrawn personality. "I don't need to scream to get my point across/ I don't need to yell to know that I'm the boss," Burch purrs on "To the Boys." "Ain't it a shame/ That I'm the only one to blame," she exhaustedly sings on "Every Little Thing." "It's in my nature to be guarded/ I wish I was a wilder soul," she admits on "Wild." On record and on stage, Burch demands close listening, and not just because of her angelic voice and her backing band's texturally perfect mélange of sparse jazz mixed with a vintage rock 'n' roll sound. Instead, it's the raw substance baked into that sound that really resonates. "I wanted to reveal my own struggles with fear and anxiety," Burch told The Fader about First Flower in October 2018. "I do not have the answers by any means, but I wanted to talk about those imperfections." (Nick McGregor) Kilby Court, 741 S. Kilby Court, 7 p.m., $13 presale; $15 day of show, all ages, kilbycourt.com 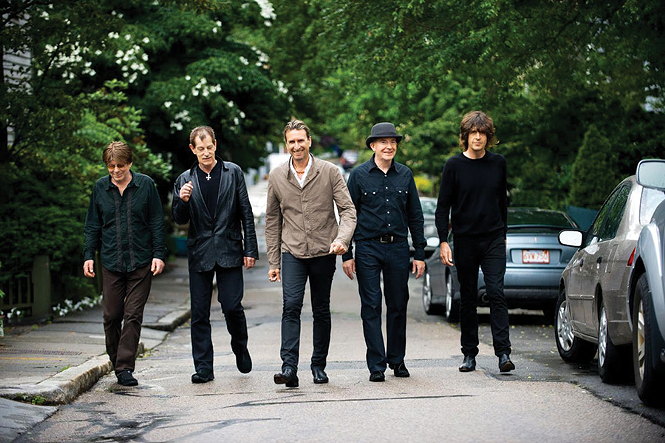 The Fixx, DJ Birdman
Nowadays, New Wave might seem somewhat outdated, the product of an era that was home for those with energy, exuberance and just the right hairstyle—tempering the early insurgency of punk with newfound drive and determination. As the 1970s came to a close, any number of bands opted to take that tack—Simple Minds, Talking Heads, The Cars, Talk Talk, INXS and Squeeze among them—delivering their efforts with varying degrees of invention. The Fixx ranked among the more successful of that lot, and their steady string of hits—"One Thing Leads to Another," "Saved By Zero," "Red Skies," "Deeper and Deeper" and "Stand Or Fall"—made them mainstays on mainstream charts. Initially known as Portraits, they later changed their name to The Fix, causing some initial trepidation for their record label due to the decided drug implications. Adding the extra "x" solved the problem, and 40 years later, they've never looked back. The band's five core musicians are Fixx-tures of sorts themselves, all members of the group during its early '80s heyday. Trivia seekers might note that Cy Curnin and Jamie West-Oram had cameos on Tina Turner's break-out album Private Dancer, appearing on "I Might Have Been Queen" and "Better Be Good To Me." The Fixx can certainly be credited with not just staying power, but with the creativity to work well with others. In their case, one thing did indeed lead to another along the path to prosperity. (LZ) The Commonwealth Room, 195 W. 2100 South, 9 p.m., $32–$50, 21+, thestateroompresents.com 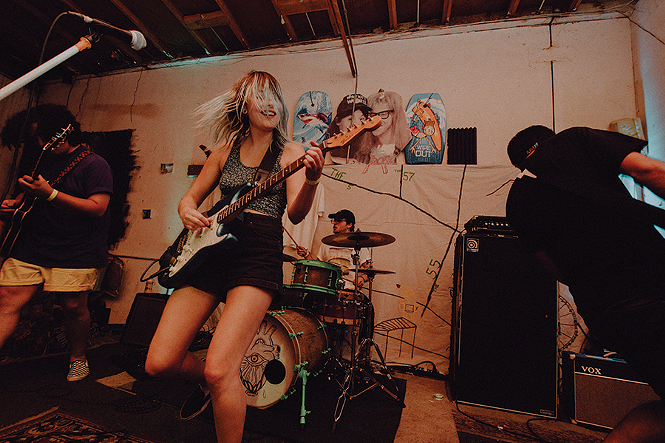 SUNDAY 9/1
Glacier Veins, Rejoin the Team, Fairmont
If you're into emotional punk, put Portland band Glacier Veins on your radar. They gained steam playing 2016's Warped Tour and Treefort in 2017, and you can hear why. The "dreamy" label gets thrown around a lot to describe anything from music to lyrics to ethos, and Glacier Veins filters all of these elements through a punk veneer that breathes some life into the descriptor. The breakdowns are swift and sometimes even slow, though still percussive, and at a punk show, you sometimes need that kind of respite from your own energy—dreamy, right? If it's not your thing, no worries; SLC band Rejoin the Team brings the classic pop-punk energy. Songs like "Lights off" offers the emo goods with lyrics like this: "You only kiss me with the lights off/ You only kiss me when you're drunk and the bottle's gone/ You said you'd be there for me." Meanwhile, songs like "Knife Fights" and "Young & Bitter" smack entirely of moshful, post-high school angst. Much of their discography is made of second servings of their tracks in acoustic or differently-mixed versions, but these contrast enough to be worthwhile. Finally, we've got Fairmont, a new SLC joint whose April release Emerson Ave. was a striking foray into the self-appointed lo-fi, divorcecore genre. Although the D-core of late-last-millennium seems like a far cry from what Fairmont is serving in Emerson or July's A Rough Couple of Months, there's a wailing pain in each release that seems to modernize the idea, and maybe it's time for just such a modernization. (Parker S. Mortensen) Kilby Court, 741 S. Kilby Court, 7 p.m., $10, all ages, kilbycourt.com 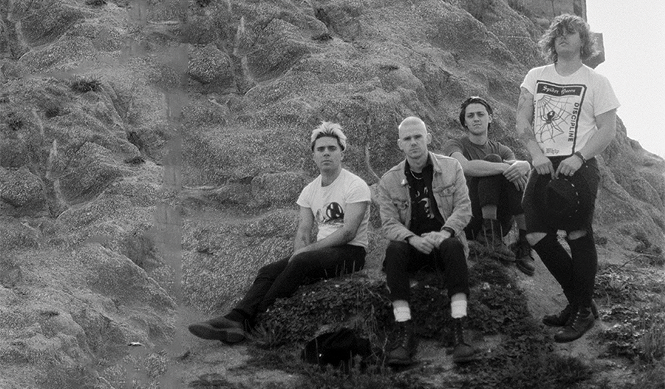 Choir Boy, Gamma World, Kneeling in Piss, Big Baby
Although this local-packed show's opener, Big Baby, haven't released an album since 2016, that's no reason to overlook them. The duo of Dyana and Madison create a constant, chaotic energy that's loud and demanding, specifically demanding that you embrace your yelling, vulnerable inner baby. "Babycore," they bill themselves, constantly reminding fans to "never stop being a baby, unless you're too old!" This was years before 2019's obsession with baby, being baby, "I'm baby," etc., and the group's 2016 album still holds up in the wake of this meme. As for Kneeling in Piss, conveniently the first and most important thing you should know about them is that they are named Kneeling in Piss. "If your body is a temple, your piss is holy water," their website says in an earnest essay written earlier this year. This is practice-space punk, the kind of music that's rough and lovable and seemingly out the door as soon as it's in its second draft. The Columbus, Ohio, band is touring for their July release, Tour De Force, alongside SLC's own Choir Boy. I suspect hearing them live will communicate the ethos of piss much better than anything you'll hear recorded. Joining them will be a local band within a local band—the new side project of Choir Boy members Michael Paulson and Jeff Kleinman, Gamma World. The pair just released their debut, fittingly named Demo, on Aug. 5. Choir Boy soon embarks on a cross-country tour opening for other indie acts. Needless to say, this might be one of the last times to catch a Choir Boy show before they're truly a household name (at least in the indie world). If anything, it's the last you'll see of these busy boys for a while. (PSM) The Urban Lounge, 241 S. 500 East, 8 p.m., $7, 21+, theurbanloungeslc.com

WEDNESDAY 9/4
Bon Iver, Sharon Van Etten
At this point, talking about Bon Iver transcends simple musical discussions. Yes, Justin Vernon started the band with the release of an achingly personal folk album (2007's For Emma, Forever Ago) recorded in a desolate winter cabin, laying the template for every Americana copycat to follow. But since then, Vernon has taken Bon Iver in wildly divergent directions. In 2011, he pulled a bursting-at-the-seams full band into his surrealist orbit on the chamber-pop masterpiece Bon Iver. In 2016, Vernon spun a brutalist electronic fantasia on 22, A Million, an experimental album full of vacillating synthesizer riffs and disembodied, auto-tuned lyrical narratives. Now comes i,i, another stop on Bon Iver's long road to creative transcendence. It's got acoustic guitars and heavenly harmonies, skittish keyboards and blasts of sonic whiplash and song titles that read like cryptic encodings; among them, "U (Man Like)," "Jelmore" and "RABi." Bon Iver no longer represents just a band, or even a genre—instead, Pitchfork describes it as "a creative sanctuary, a battle against ego, a collective catharsis." On top of that, the band always captures a feeling, no matter what sound it's cloaked in. Across all of his stylistic explorations, Vernon still sounds rooted in human foibles, offering up his own vulnerabilities as a way of sniffing out the ones we hide. "I like you/ And that ain't nothing new," he sings with a mix of sorrow and satisfaction on "iMi," perhaps reflecting on the peaks and valleys of life as a Bon Iver fan. Don't sleep on opener Sharon Van Etten, who's followed a similar path from folkie singer-songwriter to multi-disciplinary Renaissance woman. (Nick McGregor) Maverik Center, 3200 Decker Lake Drive, 7:30 p.m., $42–$102, all ages, maverikcenter.com