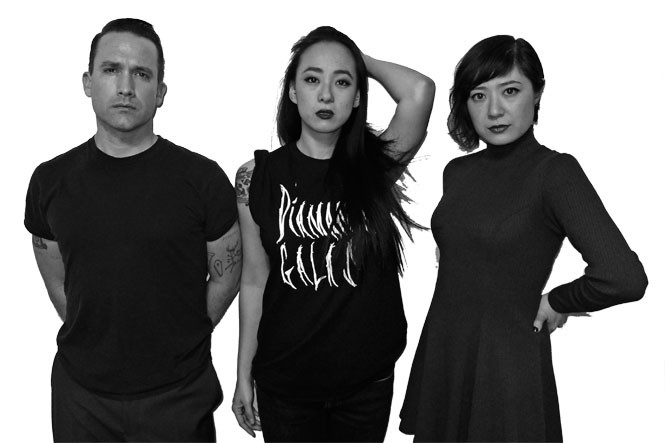 
There's an episode of Parks & Recreation where the parks department is brainstorming ideas for a new mural, and April comes up with a freaky project involving a guy running in a hamster wheel while screaming and eating raw beef; rats made out of garbage; and looped video of knee surgeries. I imagine that Angel Guts: Red Classroom, the latest album from experimental avant-garde group Xiu Xiu (pronounced "shoo shoo"), would be a fitting soundtrack for something so horrifying. Mostly made with ominous beeps, bloops, zips and zaps, Angel Guts—named after a violent Japanese porno, because art—is shocking and unnerving, especially with frontman Jamie Stewart whispering like a creep. On Xiu Xiu's website, though, the band promised to play some older tunes on this tour, too, so at least you can probably look forward to a rendition of "I Luv the Valley OH!" Circuit des Yeux and Jawwzz will also perform. (Kolbie Stonehocker)
Kilby Court, 741 S. Kilby Court (330 West), 8 p.m., $10 in advance, $12 day of show, KilbyCourt.com; limited no-fee tickets available at CityWeeklyStore.com 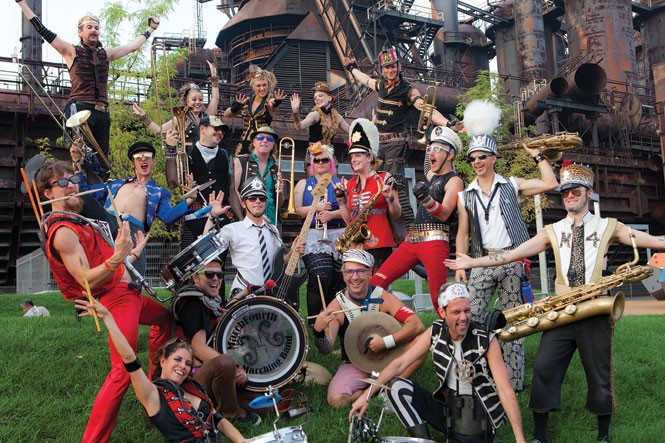 
This Portland, Ore., mega-band has everything you wish your high school marching band had: colorful costumes, alluring dancers, stilt-walkers, acrobatics and, of course, fire. As a band as well as a veritable traveling circus troupe, MarchFourth Marching Band (aka M4) take their name from the date of their first show—at, fittingly, a Mardi Gras party—as well as the command to "march forth" as they turn every show into a vaudevillian wonderland that's a feast for the ears and eyes. Drawing from funk, jazz, ska, rock and gypsy punk, the unique MarchFourth sound is created with horns—killer saxophone and trumpet, especially—drumline-style percussion, electric bass and, most importantly, an attitude of rowdy revelry. Their latest album, 2011's Magnificent Beast, is great, but do yourself a favor—go experience the live spectacle. (Kolbie Stonehocker)
The State Room, 638 S. State, 8 p.m., $18, TheStateRoom.com; limited no-fee tickets available at CityWeeklyStore.com


Memphis, Tenn., native Valerie June describes her music as "organic moonshine roots music." Her first studio album, Pushin' Against a Stone—released in 2013—is a fusion of twangy country fiddles, gospel-inspired lyrics and finger-snapping blues beats. But even with all that genre blending, June's songs—including the acoustic "Twined & Twisted" and aptly titled "Workin' Woman Blues"—still sound like simple, old-fashioned folk songs. The album's intense sincerity and authenticity stem from June's religious Southern upbringing, during which she sang the same type of songs with her church choir. Jenn Grant will open the show. (Natalee Wilding)
The Urban Lounge, 241 S. 500 East, 8 p.m., $18, TheUrbanLoungeSLC.com


Ska can often sound like happy-go-lucky circus music, but Boston natives The Mighty Mighty Bosstones have been adding some grit—accomplished partly through frontman Dicky Barrett's gravelly voice—to the genre since 1984. Part of the third wave of ska that hit popularity in the '90s—with bands such as No Doubt, Rancid and Reel Big Fish at the forefront—The Mighty Mighty Bosstones pioneered the ska-core style, a combination of ska and elements of punk, hardcore and rock. The band went on hiatus in 2003 but reunited in 2007, and The Mighty Mighty Bosstones proved to their fans that their plaid flame is brighter than ever with the release of two new albums, including their latest, 2011's The Magic of Youth. Show Me Island and Interrupters will open. (Kolbie Stonehocker)
The Depot, 400 W. South Temple, 8 p.m., $20 in advance, $25 day of show, DepotSLC.com


On his Facebook page, Austin, Texas-based musician Ben Kweller lists the many terms that can apply to him: "indie-popster, power-popist, balladeer, anti-folkie, acoustic-punk-rocker." They all describe different facets of the 34-year-old's versatile musical ability, as he can belt out a catchy pop melody over electric guitar as well as croon with genuine emotion over piano. Kweller has been in the music game a long time considering his relatively young age, as he started playing music at age 9. He discovered his highly personal, revealing writing style after he moved to New York City at age 18 in his post-Radish days, and it's since been the glowing heart of several albums, including 2012's Go Fly a Kite. Will Sartain is also on the bill. (Kolbie Stonehocker)
The Urban Lounge, 241 S. 500 East, 9 p.m., $18 in advance, $20 day of show, TheUrbanLoungeSLC.com; limited no-fee tickets available at CityWeeklyStore.com


Early stories about Jenny Lewis' music career made much out of her being a child actress, but her work with indie-rock/alt-country group Rilo Kiley, in which she eventually became the clear frontwoman, is what rightfully leads her bio these days. Since Rilo Kiley's fourth and apparently final (sob) album was released in 2007, Lewis has explored folk-country with the Watson Twins; recorded a pop album as Jenny & Johnny with her boyfriend, Jonathan Rice; and released two solo albums—the most recent of which, Voyager, just landed July 29. Whereas her other projects seemed to be deliberate swerves away from the Rilo Kiley sound, Voyager feels more like its next evolution, with Lewis' sweet vocals—sometimes sing-song folksy, sometimes full of Linda Ronstadt-esque richness and emotion—belying sly, cutting lyrics and snarky soulfulness. (Rachel Piper) The Depot, 400 W. South Temple, 9 p.m., $20, DepotSLC.com


Originating from the artistic city of Portland, Ore., Mimicking Birds play what's probably the softest form of indie folk, a truly tender sound possessing the clarity and fragility of spun glass. Since their self-titled debut album was released in 2010, the three-piece's music has evolved from a simple acoustic sound to a more delicate style with the inclusion of electric keys, guitar and bass, as heard on Mimicking Birds' new album, Eons, released in May. And in the middle of it all is singer Nate Lacy, whose near-whispered vocals push relatable vulnerability into each melancholy track. James Junius and Mildred are also on the bill. (Camri Mecham)
The Shred Shed, 60 E. Exchange Place (360 South), 7 p.m., $8, ShredShedSLC.com