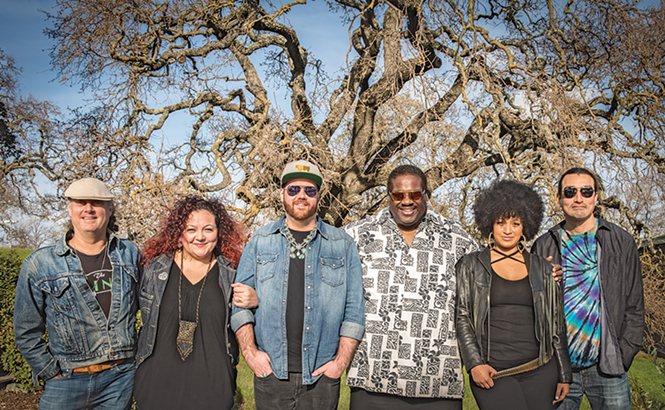 THURSDAY 8/23
Melvin Seals & JGB
We've just passed through The Days Between, what hardcore Grateful Dead fans call the week between Jerry Garcia's birthday (Aug. 1, 1942) and the day of his death (Aug. 9, 1995). So it's fitting that Melvin Seals, longtime organist in the Jerry Garcia Band, comes to town with the current version of JGB. Garcia always imagined that side project as an earthier, bar band-influenced version of Grateful Dead, and over his 18-year tenure, Seals added the soulful funk, R&B and gospel touches that Garcia yearned for. That helped to usher in the multi-faceted modern jam-band era, with tunes that pull from every corner of Americana, putting them through an improvisational filter. Calling themselves the "keepers of the flame," Seals and his bandmates—Zach Nugent on guitar, Shirley Starks and Cheryl Rucker on vocals, Pete Lavezzoli on drums and John-Paul McLean on bass—hew to Garcia's more organic, intuitive side, playing the staples but also digging into JGB's discography to trot out some super-rare deep cuts. In that sense, Melvin Seals and JGB might represent a through line to the past that's more honest and direct than many of the star-studded arena shows propagated by Dead alumni Bob Weir, Phil Lesh, Mickey Hart and Bill Kreutzmann. (Nick McGregor) The Commonwealth Room, 195 W. Commonwealth Ave., 8 p.m., $27, 21+, thecommonwealthroom.com 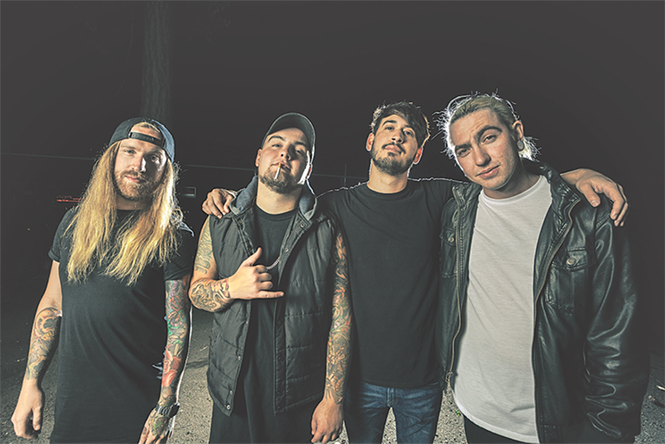 FRIDAY 8/24
Dead Crown, Hollow I Am, Apotheon, Increate, Founders of Ruin
Man-bun and XXL T-shirt lovers rejoice! Nü-metal is making a comeback, and djent leaders Dead Crown are strumming to the beat of their own 7-string guitars. With a familiar sound comparable to bands like Emmure and Gideon, the Portland, Ore., four-piece conjure up mean two-steps in the pit with songs like "South Side" and "The Seven." The 6-string versus 7-string debate goes all the way back to the '90s, when Korn went multi-platinum with Follow the Leader. It's hard not to associate 7-string with that overblown era of nü-metal, but these days, the once-maligned genre sounds heavier and even more aggressive. "We like to get the crowd involved and create an experience for everyone in the room," Dead Crown vocalist Kendall Johns says. "We bring a lot of energy and do our best to put on an entertaining show." That's easy with the novelty 7-string guitar, but I prefer Pig Destroyer's Scott Hull, who uses a custom 8-string. I digress. The point is, 7-strings were virtually off the radar until Dead Crown came out swinging with their 2018 debut EP Come Hell. Featuring plenty of songs you can two-step and windmill to, Come Hell even landed on Billboard's radar at No. 11 for hard rock album sales. Touring the nation with Denver shredders Apotheon and a host of other bands, Dead Crown is exploding on the metal scene and making a name for the 7-string movement. (Rachelle Fernandez) The Loading Dock, 445 S. 400 West, 7 p.m., $12, all ages, loadingdockslc.com

FRIDAY 8/24- SUNDAY 8/26
Reggae Rise Up Festival feat. Rebelution, Stephen Marley, Atmosphere, Steel Pulse and more
It's been several decades since reggae found its way into the musical mainstream. Credit Bob Marley & The Wailers and Jimmy Cliff for early inspiration, along with seminal hits like Millie Small's "My Boy Lollipop," Johnny Nash's "I Can See Clearly Now" and Dekker's "Israelites." Bolstered by the successful film The Harder They Come, a commitment from Island Records and Eric Clapton's cover of Marley's insurgent anthem "I Shot the Sheriff," reggae rose up in the '70s and hasn't receded since. Later infused with rap, rock and dub, a new generation of reggae artists have joined the old guard in carrying the torch forward. It's appropriate, then, that the eighth annual Reggae Rise Up festival presents traditionalist stars like Steel Pulse, Stephen Marley and the Original Wailers, modern interpreters like Rebelution, J Boog and Soja, and reggae-influenced rappers like Atmosphere and Del the Funky Homosapien. Granted, Heber City is a long way from Jamaica's sun-swept beaches, but the percolating rhythms bring hints of those idyllic environs to Utah's own backyard. With two stages, camping and a variety of vendors, music and merriment, it's sure to be an exceptional experience. (Lee Zimmerman) River's Edge at Deer Park, 7000 Old Highway 40, Heber, Friday, 2-11 p.m.; Saturday & Sunday, noon-11 p.m., $55-$170, all ages, reggaeriseuputah.com

MONDAY 8/27
Yuno
Those who are passionate about music have one of two dreams. If you make your own music, you hope the right person will notice your talent and connect you with the resources that can transform a hobby into a career. On the other hand, if you're not blessed with the gift of creativity (your humble reporter will now take a bow), you relish the opportunity to discover a promising artist at the beginning of his or her career and then follow them as they earn their overdue acclaim. Both scenarios fit for 27-year-old Jacksonville, Fla., native Yuno. After spending a few years quietly crafting exquisite emo-pop nuggets in his home studio, Ishmael Butler—frontman of avant-garde hip-hop groups like Digable Planets and Shabazz Palaces—discovered Yuno's tunes on Soundcloud. After corresponding digitally for a year, Butler then introduced Yuno to the folks at Seattle's Sub Pop Records, who snapped him up and earlier this summer released his debut full-length, Moodie, which is full of shiny, yet cathartic, post-break-up declarations. Yuno is a self-contained artist: In addition to writing, performing, recording and engineering all of his own music, he creates all of the attendant visuals, taking his own promotional photos, drawing his own album covers and directing his own music videos. Catch him here on his first nationwide tour, with lead single "No Going Back" serving as the perfect end-of-summer antidote. (NM) Kilby Court, 741 S. Kilby Court, 7 p.m., $12, all ages, kilbycourt.com 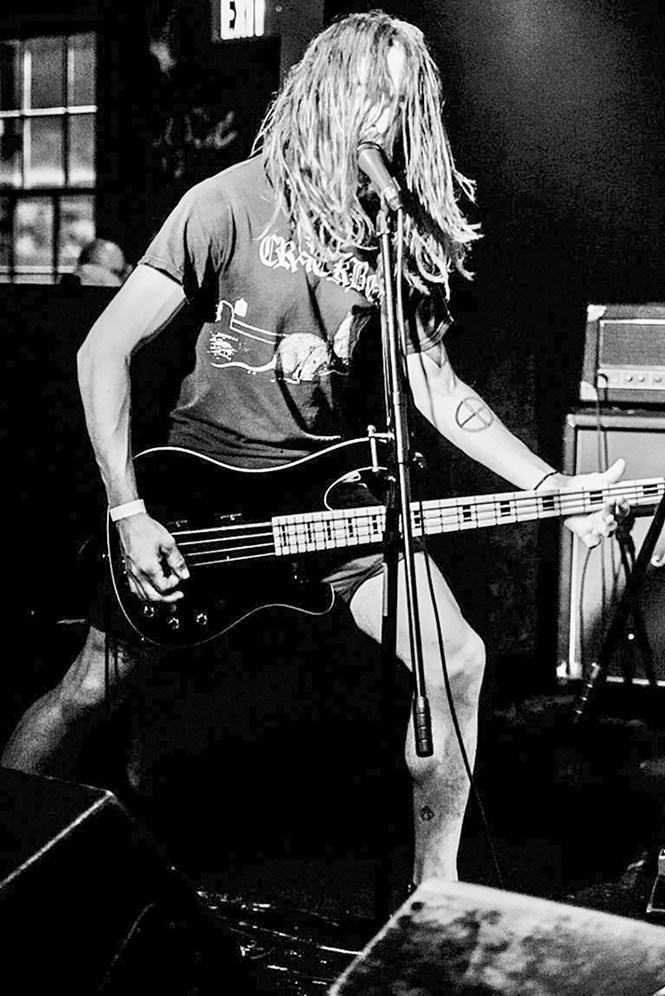 WEDNESDAY 8/29
Infernal Coil, Rare Form, 2 Headed Whale, Sister Missionary
The more illegible the font your death metal band's name employs, the more death metal you are. That was the case with legendary acts like Enslaved and Averse Sefira, and partially with Boise shredders Infernal Coil. However, there is a method behind the madness of these unreadable monikers. Metal historians (meaning this guy I found on Quora named Merin) state that death metal bands do this to keep outsiders away from their music, maintaining a sense of scene purity. Whether the unreadability is linked to anti-conformity or not, guitarist/vocalist Folús (aka Blake Connally) of Infernal Coil reinforces said purity by drawing inspiration for his band's 2018 album, Within a World Forgotten, from "a compulsion to express the voice of the voiceless." Explaining more, he says, "Our hope is that our words and suffocating sound will be the mirror to the much-needed self-reflection/realization of our disgusting existence." Since the release of their 2016 demo Burning Prayer of Infinite Hatred, the band has stayed true to that dark and "disgusting" sound—sure to keep any outsider away. "We treat our live performance much like an athlete," Folús says. "It is punishment in every aspect of the word, for us, as well as the individuals who attend, for the crimes we have all committed." Come to Diabolical Records for the punishment, and stay for Infernal Coil as they share the stage with Rare From, 2 Headed Whale and Sister Missionary. (RF) Diabolical Records, 238 S. Edison St., 8 p.m., $5-$10 suggested donation, all ages, facebook.com/diabolicalslc