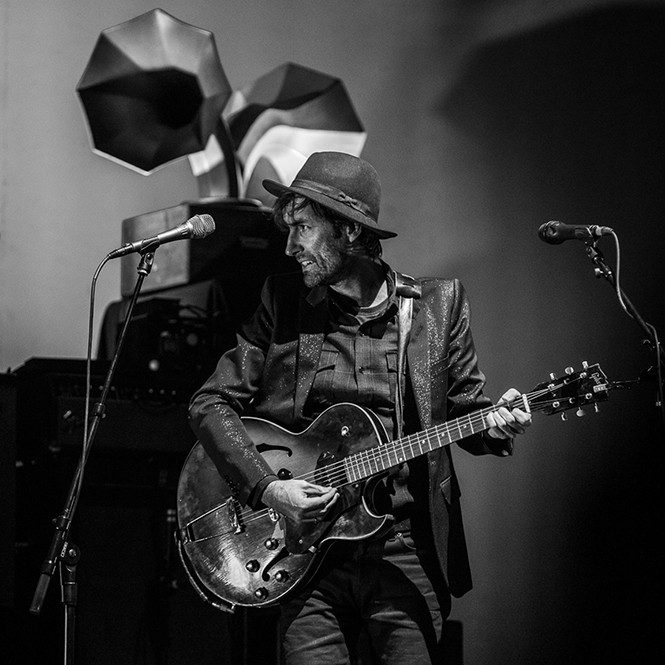 THURSDAY 8/24
Andrew Bird, The Handsome Family, Talia Keys
Andrew Bird is a rare bird. Not many acts achieve his level of success with the violin as the central instrument—especially when their work is rooted in Americana, where it's more common to refer to it by the effwerd ("fiddle"). Then again, Bird's not easy to pigeonhole. In fact, he's made himself a nice little nest from strands of folk (domestic and imported), jazz, classical, blues, pop, rock, electronic and pretty much anything else that strikes his fancy. He'll wing between all of these on a single album, even single songs, drawing his bow across the strings and whistling like a real bird. His 20-year evolution from Music of Hair (self-released, 1996) through Are You Serious (Loma Vista, 2016) is fascinating, going from bare-bones acoustic to baroque electronic, instrumental to lyrical, never landing on a definitive aural branch. He's carved out an original niche in a notoriously hostile environment, not only surviving but thriving. With his old friends The Handsome Family—singular winged creatures in their own right—as support, the birdsong's gonna be strong in the park tonight. (Randy Harward) Pioneer Park, 350 S. 300 West, 7 p.m., $7.50 advance/$10 day of show, all ages, twilightconcerts.com

FRIDAY 8/25
Lætitia Sadier Source Ensemble, Heather Trost, Grizzly Prospector
The French band Stereolab was known for a '60s French jazz influence in its synthetic pop sounds that was Euro-cool without the ironic distance—one of those unique sophistications that could seemingly only happen in the '90s. Lætitia Sadier was the vocalist and also played a plethora of instruments in the ensemble, before embarking on a solo career with 2010's The Trip (Drag City). Her newest, Finding Me Finding You (Drag City, 2017) pairs her with the Lætitia Sadier Source Ensemble, including personnel from her previous solo releases. As with Stereolab, her vocal style—and the overall atmosphere she creates—is breathy without sacrificing earthiness. It's as if this highly individualistic singer, who previously was largely in the position of mouthing words written by others, has found her own source of inspiration and renewed creativity. (Brian Staker) Urban Lounge, 241 S. 500 East, 8 p.m., free, 21+, theurbanloungeslc.com

The Drifters
The Four Tops has seen nine members come through its lineup. The Spinners boast 17; the Coasters, 21; the Temptations, 23; the Platters, 46. The Drifters, est. 1953, have the high score. In 64 years, 64 different dudes have performed the dynamic soul/R&B quartet's goosebumps-inducing classics, like "Under the Boardwalk," "This Magic Moment" and "Save the Last Dance for Me." This includes competing versions of the band under different management in different territories, often with possessive distinctions in their names, like "Bill Pinkney's Original Drifters." Possession being, according to armchair attorneys, nine-tenths of the law, original Drifters manager and "brand" owner George Treadwell replaced members like faulty parts, and his family continues this today. And what a difference a letter makes: Going from "band" to "brand" treats an institution like The Drifters—whose songs mean so much to so many—like a product. But the revolving doors have spun for so long that it doesn't really matter. No matter who's on the mics, you're gonna hear all those incredible, illustrious songs done well. Focus on the feeling, not the faces, and tonight will still be magic. (RH) Sandy Amphitheater, 1245 E. 9400 South, 8 p.m., $12-$18, sandyarts.com/sandy-amphitheater

Grits Green, Big Blue Ox and SuperBubble Present: The Big Fat Nasty
The other day, SuperBubble frontguy Brandon "B." Barker (aka Simply B.) popped up on Facebook Messenger. "Yo, buddy! Just so you know, this show's gonna be the funkiest," he said, linking to this gig. As you can see from the bill, he's not kiddin'. Hip-hop group Grits Green (pictured), acid-jazz/afrobeat/funk outfit Big Blue Ox and jam/jazz/loop group SuperBubble all genuflect at the altar of The One, where funk music is God and the Golden Rule is to produce big, fat nasty grooves for the people. The impetus for the occasion? All three acts dropped EPs this summer, and that's about all the excuse they need for a party like this—but they don't even need that. Grits, who released Water (gritsgreen.com) in June, is a rare hip-hop band, where live instrumentation matters as much as their rhymes. Legend has it that Big Blue Ox exists only for the stage, where their muscly musical jaunts live and breathe—except when they've been captured for posterity on Big Blue Ox (bigblueox.bandcamp.com). SuperBubble is like-minded, starting with more traditional, structured songs as heard on their self-titled debut (superbubble.bandcamp.com), then turning them into ephemeral beings, like great orbs of soap and water that pop in and out of existence. So B.'s appraisal of the show, meta as it might be, is accurate. All three of these acts together under one roof, on the same stage, is gonna be so funky, it's frightening. (Randy Harward) The State Room, 638 S. State, 9 p.m., $10, 21+, thestateroomslc.com

SATURDAY 8/26
LOVELOUD Fest: Imagine Dragons, Neon Trees, Krewella, Nicholas Petricca (of Walk the Moon), Joshua James, Aja Volkman
Woot! Ya gotta love a huge LGBTQ event in Utah County—whatcha might call the state's ultra-conservative B-hole (the B stands for bigotry). With the Provo Pride Festival and similar events, it's almost like they're bleaching the prejudice outta Utah's posterior orifice—and that's beautiful. So, even if you're sick of hearing about Provo pop, it's way cool that Imagine Dragons and Neon Trees—talking about the still-Mo members of both bands, because we all know Tyler Glenn's cool—are using their platform to promote unconditional love for all. Adding their voice to the cause is potty-mouthed Pakistani EDM duo Krewella, who might ruffle additional feathers with (gasp!) curse words; Walk the Moon frontdude Nicholas Petricca performing a solo set (signaling, we hope, an end to its lengthy, family-emergency induced hiatus); local-nay-national folksmith Joshua James; and Aja Volkman, who's doing the singer-songwriter thing post-Nico Vega. Even if the tickets weren't so reasonably priced, it'd be worth paying more just to ensure the Loveloud's message gets even louder. (RH) Brent Brown Ballpark, 970 W. University Parkway, Orem, 5:30 p.m., $25-$200, all ages, smithstix.com

Bleached, Dream Slut
Every once in a while, everything comes back around to where it started: San Fernando Valley band Bleached revives the early '80s SoCal pop-punk sound. Sisters Jennifer and Jessica Clavin were born in the '80s, and something of the period seems embedded in their very DNA. The band's latest EP, Can You Deal? (Dead Oceans, 2017), is a reaction against being labeled a "girl punk" band. But there's more than just attitude here; last year's sophomore full-length Welcome the Worms (Dead Oceans) charted the path of leaving an abusive relationship, through alcohol and drug abuse and beyond, as a course of self-discovery—and it rocks. Bleached is clearly a musical force to be dealt with. Local openers Dream Slut (be careful if you Google that) bills itself as "drama queen punk" and they were a bitchin' opener for The Damned last April. (BS) Kilby Court, 741 S. 330 West, 7 p.m., $12-$14, all ages, kilbycourt.com