I’m With Her, Angélique Kidjo, Chris Stapleton, Melvins and more.

THURSDAY 8/9
I'm With Her
Given that Sarah Jarosz, Sara Watkins and Aoife O'Donovan are each exceptional artists in their own right, I'm With Her is a supergroup of sorts. Their promising debut album, See You Around, might seem modest, but it proves that this collaboration makes for a potent blend. Not surprisingly, the band's combined talents—as songwriters and adept musicians—make their live appearances effortlessly engaging. The three take turns sharing lead vocals, singing precise harmonies and switching instruments. Although they eschew the support of a big backing band, their sound is rich, resonant, alluring and captivating all at the same time. Watkins focuses mainly on fiddle, while O'Donovan primarily plays guitar. But it's Jarosz, the youngest of the three, who serves as the main multi-tasker. Plying her skills on guitar, banjo and mandolin, she also plays lead and often provides sole accompaniment. Borrowing their handle from the feminist motto inspired by the Hillary Clinton campaign, I'm With Her affirm their own independence. Along with their album tracks, they throw in occasional covers—John Hiatt's "Crossing Muddy Waters," Jim Croce's "Walkin' Back to Georgia," Adele's "Send My Love (To Your New Lover)," Gillian Welch's "A Hundred Miles" and Bill Monroe's "Lord Lead Me On" among them—which are more than enough reasons to catch these gals at their upcoming Ogden Nature Center show. (Lee Zimmerman) Ogden Nature Center, 966 W. 12th St., Ogden, 7 p.m., sold out as of press time, call 801-621-7595 for wait list, all ages, ogdennaturecenter.org 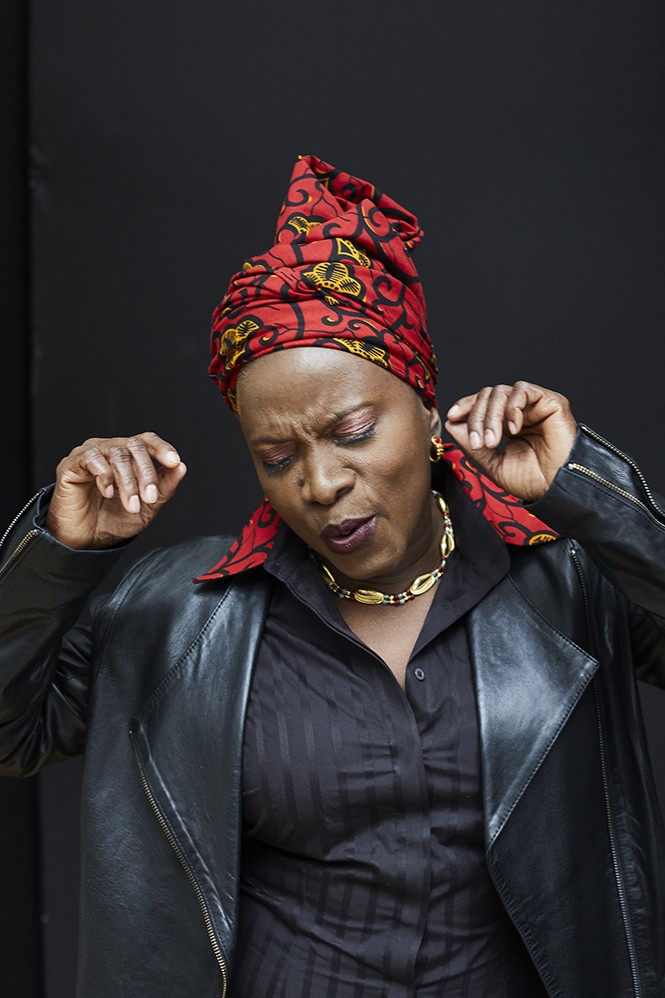 FRIDAY 8/10
Angélique Kidjo, Femi Kuti
Angélique Kidjo's music spans continents. Born in Benin of Fon and Yoruba ancestry, she became famous in her native West Africa before moving to France in the 1980s. Her first few solo albums were recorded in Paris, Miami, Prince's Paisley Park Studio in Minneapolis, Brazil and New York, with Kidjo proudly mixing Afro-beat, Caribbean zouk, Congolese rumba, jazz, gospel and Latin styles sung in a blend of the five languages in which she's fluent. She's collaborated with the Luxembourg Philharmonic Orchestra, renowned minimalist composer Philip Glass, jazz legends like Herbie Hancock and modern pop stars like Bono, Alicia Keys, Dave Matthews and Josh Groban. Alternately described as Africa's premier diva (Time) and one of the 100 Most Inspiring Women in the World (The Guardian), Kidjo's latest project is also one of her most focused: a complete re-imagination of Talking Heads' landmark 1980 album Remain in Light. Meant to honor David Byrne and company's embrace of world music while also reclaiming Westernized rock for the African continent, it's a radical celebration of cross-cultural pollination and multi-lingual euphoria. Hailed by critics at Pitchfork as one of the year's "most daring records," it should lead to one of the summer's most celebratory concerts—especially since fellow Afro-beat icon Femi Kuti, son of the genre's founder, Fela, is along for the ride. (Nick McGregor) Red Butte Garden Amphitheatre, 2280 E. Red Butte Canyon Road, 7:30 p.m., $45 advance; $52 day of show, all ages, redbuttegarden.org 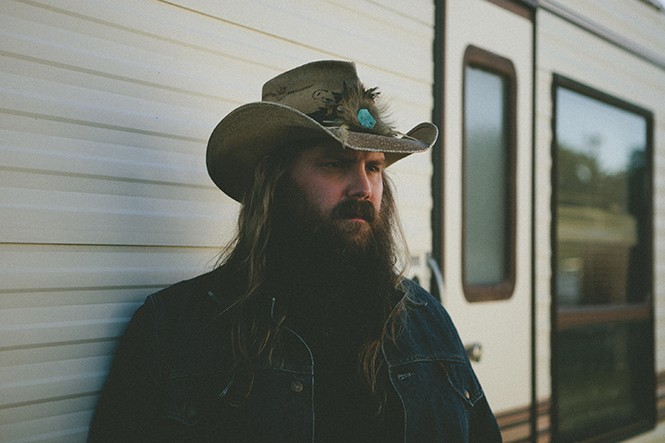 SATURDAY 8/11
Chris Stapleton, Marty Stuart, Brent Cobb
Three albums and five years into a spectacular solo career, Chris Stapleton has clearly attained superstar status. The winner of five Grammys, seven Academy of Country Music Awards, seven Country Music Association Awards, five Billboard Music Awards, two iHeartRadio Music Awards and nine ASCAP Country Awards, he's accumulated more kudos than many artists with résumés far more ample than his. The reason for that is obvious: Stapleton is a throwback to a '70s sound that blends die-hard country, Southern rock and seasoned soul in equal measure. The influence of several iconic artists also finds its way into that brew, from Merle Haggard and Waylon Jennings to Lynyrd Skynyrd, The Marshall Tucker Band and Derek & the Dominos. Not surprisingly, Stapleton has become a fan favorite thanks to his gritty Everyman approach and a blue-collar sensibility that's rugged and resilient, tough and tenacious, even tender and touching. After establishing himself with his band The Steeldrivers, Stapleton went on to pen approximately 150 songs for other artists, scoring hits with Kenny Chesney, George Strait, Luke Bryan and Darius Rucker. That doesn't even include Stapleton's collaborations with Tim McGraw, Dierks Bentley, Brad Paisley, Vince Gill, Justin Timberlake, Peter Frampton and Sheryl Crow. With his bulky frame, straggly locks and woolly beard, Stapleton might resemble an intimidating outlaw, but he's still an exceptional artist. (LZ) Usana Amphitheatre, 5150 Upper Ridge Road, 7 p.m., $34.75-$89.75, usana-amp.com

MONDAY 8/13
Melvins
There are a number of ways to get back at a horrible boss—for example, stealing their lunch from the company fridge. Or, if you're feeling brave, you could mail 100 bags of penis-shaped gummies to their address (yes, there's a website for that). Or, for those that really hate their boss, just do what Buzz Osborne, Mike Dillard and Matt Lukin of the Melvins did: Name your band after said horrible boss. The historic sludge-rock band hailing from Montesano, Wash., (or Aberdeen, depending on your love/hate relationship with Kurt Cobain) came about thanks to a real-life Melvin—a supervisor at a Thriftway grocery store who was, to put it nicely, loathed by his employees. Fast forward 35 years, and no one knows how the Thriftway Melvin is doing or how he feels about his inadvertent legacy. Whether he likes it or not is incidental at this point, though: Melvins is responsible for shaping the world of grunge and alt-rock that we are blessed by today. In that process, Buzz Osborne has become a legendary weirdo. Although he's the only original member left and he's lived in Los Angeles for years—recording almost all of Melvins' albums in that sunny atmosphere—it's still easy to link the band to the rainy state of Washington. Perhaps that's because the Pacific Northwest of the 1990s remained in the Melvins' influential vice grip. From their first EP, 1986's Six Songs (which later grew to 26 songs), to 2016's Basses Loaded, which featured six bass players, to 2018 full-length Pinkus Abortion Technician, the Melvins have done things their own weird, slow way. Pinkus Abortion Technician was recorded with Jeff Pinkus of fellow revolutionary weirdos Butthole Surfers, and it rules. Having two bass players is sludge as fuck. (Rachelle Fernandez) The Urban Lounge, 241 S. 500 East, 8 p.m., $20 presale; $25 day of show, 21+, theurbanloungeslc.com

TUESDAY 8/14
Yelawolf, Waylon & Willie, Struggle Jennings, Jelly Roll
An association with Kid Rock might be the kiss of death for many artists, but Southern rapper Yelawolf (né Michael Wayne Atha) boasts a complex history that can't be reduced by simple jingoism. Born in Alabama to a Cherokee father and a white mother, Yelawolf spent time in Nashville's projects, where he connected with hip-hop and the genre's rags-to-riches roots in a crucial way. His first big break came on short-lived reality show The Road to Stardom with Missy Elliott, but after his independently released debut album, Creek Water, Yelawolf ran into the usual troubles experienced by a daring, undaunted artist trying to make it in Hollywood: a record deal with Columbia resulted in a fiery studio album, Fearin' and Loathin' in Smalltown, U.S.A., that was so ahead of its time label execs shelved it and refused to release it. Yelawolf tinkered with down-home rap-rock tropes on mixtapes like The Ballad of Slick Rick E. Bobby and Hip Hop Tribute to Classic Rock, but it was 2010's Trunk Muzik that really broke him big. In 2011, he signed with Eminem's Shady Records, falling in with the no-holds-barred Detroit crew that included Kid Rock. But 2011's Radioactive earned a rare 4.5 out of 5 mic rating from hip-hop bible The Source. Even better were its follow-ups, which defined Yelawolf as an unsparing voice on the combination of Southern poverty and urban despair—Heart of Dixie, Trunk Muzik Returns, Love Story and last year's Trial by Fire. Now, Yelawolf has expanded his efforts, opening a barber shop/tattoo shop/retail store in Nashville and appearing in a movie he also scored with producer T-Bone Burnett. After a year off the road in 2017, Yelawolf's 2018 concerts should be fierce, so don't miss this one. (NM) The Complex, 536 W. 100 South, 7 p.m., $25, all ages, thecomplexslc.com 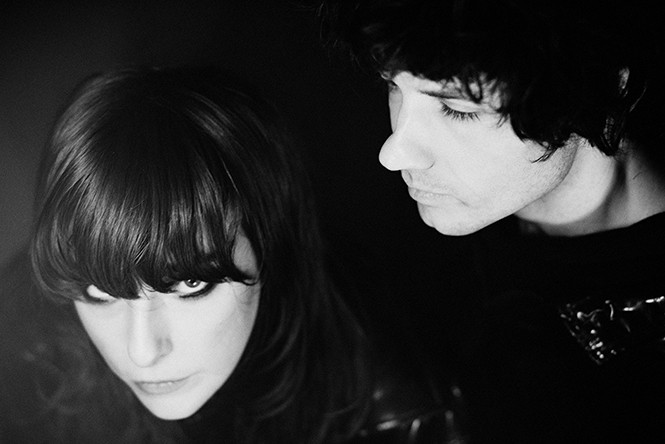 Beach House, Sound of Ceres
Beach House is the rare band that sounds pretty much the same on all of its albums, but sounds really good every damn time. On their seventh record, appropriately titled 7, the dream-pop duo from Baltimore still makes hypnotically sensual music that's creepy but comfortable—like dozing off in sunlight slanting through a dusty attic window. Their familiar bottom-heavy sound is driven by frontwoman/keyboardist Victoria Legrand's big, dirty synthesizer and organ textures, and guitarist Alex Scally's sounds are built on the same jangly tone as always. In terms of emotions evoked, Legrand's singularly rich, spacious voice is melancholic and nostalgic all at once, tugging at the listener's heartstrings in precisely the same way it has since the band formed in 2004. And, as always, sugary-sweet pieces of ear candy are hidden throughout 7, like the trippy shoegaze synth on single "Lemon Glow" and the waterfall of descending octave guitars on "L'Inconnue." Yet these amount to new irregularities in the same soundscape. Returning to this high-definition dream world is, despite its familiarity, overwhelmingly exciting each and every time—somehow every Beach House concert sounds more deeply immersive than the one before it. It's about time for the widespread acknowledgement of Beach House's music as the highest caliber of art; not only has the duo found a niche and filled it to perfection, they have continually proved themselves as one of the most venerable independent bands working in the 21st century. (Howard Hardee) The Depot, 13 N. 400 West, 8 p.m., sold out as of press time, all ages, depotslc.com