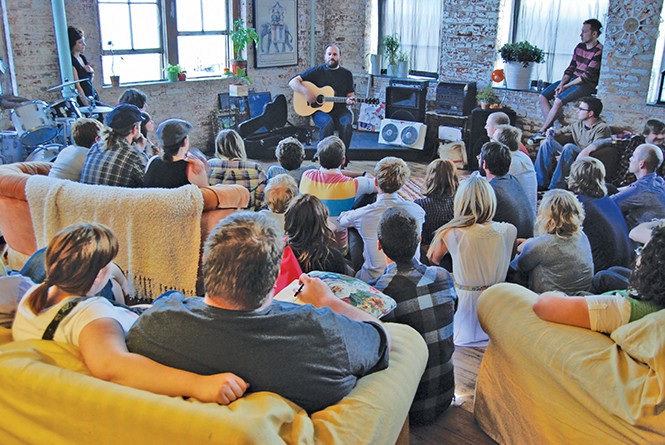 THURSDAY 12.1
David Bazan
Formerly the prime mover of Pedro the Lion and Headphones, songwriter and musician David Bazan went solo in 2008. He's since released a DVD and three solo albums; 2016's Blanco is his latest. A compilation of songs recorded and released individually as part of his online Bazan Monthly project, Blanco has a decidedly thematic flow, and he often performs the album in its entirety. Though he plays his share of clubs, Bazan is a strong proponent of house concerts like the one he brings to an as-of-yet-undisclosed location this week. "You're in someone's living room, there's 40 strangers and they're all invested in this thing that's secret, in a way," he tells City Weekly in a phone interview. "And that's really fun." House shows, he continues, offer more for performers and fans alike. On his end, Bazan can skip the afternoon soundcheck, and show up only 5-10 minutes early. "With just that much setup—I'm able to have just as cathartic a time playing music for 70 or 80 minutes than I would with three hours of prep and hanging around." Where they both win is the fact that "there's the bonus of a level of intimacy that you can't get at a venue." (Bill Kopp) House concert (location revealed after ticket purchase). 8 p.m., $25, UndertowTickets.com

FRIDAY 12.2
Dragonette, Gibbz
The music of Toronto electronic dance music trio Dragonette is so polished and fine-tuned that you want to see them perform live to discover whether there are any sharper edges. They're celebrating their 11th year with last month's release of their fourth album, Royal Blues (Dragonette Inc.), and are perhaps best known for their recording of the song "Hello" by French producer/DJ Martin Solveig with him on his fifth album, Smash (Mercury, 2011). The song was given a workout by being featured on TV shows 90210, The Vampire Diaries and Gossip Girl, and on Tim Hortons ads in Canada. It's catchy but, geez, you don't wanna beat this Dragonette into the ground. Gibbz is not a Bee Gee, but rather the nom de tune of singer/producer Mike Gibney, whose debut EP is fittingly titled Who Gibbz a F#@$. (Brian Staker) Metro Music Hall, 615 W. 100 South, 8 p.m., $15, 21+, Facebook.com/MetroMusicHall

Quiet Riot
Do you recall the first time you heard Quiet Riot? For me, it was on a fifth-grade field trip to a carnival. Fresh off the bus, anticipating junk food, rickety rides and the potential (innocent) union of me and New Girl, Kevin DuBrow's bellowing rasp set the tone: "CUM OOON FEEEEL THE NOOOIZE! GIRLS ROCK YOUR BOYS!" New Girl declined my offer to be her boyfriend, but Quiet Riot led me to glam-rockers Slade ("Noize," you see, is a cover) and gave me a classic song tied to a sunny childhood memory. What's more, the band's second single "Metal Health (Bang Your Head)," also became a certified classic, and both tunes heralded the mid-'80s dominance of arena rock—still a personal favorite genre. Sadly, QR never matched their six-time platinum success of that year, but they plowed ahead, weathering 22 lineup changes since late guitar legend Randy Rhoads formed the band in 1975. DuBrow overdosed in 2009, and his best replacement, Love/Hate's Jizzy Pearl, left the band this year, replaced by Seann Nicols (Adler's Appetite). In fact, the only remaining member of the Metal Health lineup is drummer Frankie Banali. Whenever that happens, it's kind of a bummer—but eventually it'll be true for every band. Nobody lives forever, and only the songs survive. (Randy Harward) Liquid Joe's, 1249 E. 3300 South, 7 p.m., $20 in advance, $25 day of show, 21+, LiquidJoes.net

FRIDAY 12.2
Shelter Live: Porter Robinson & Madeon
It's the age of the self-taught musician, and there are few who have burst onto the scene with the impetus of DJ/producer/musician Porter Robinson. Before age 20, Robinson received attention on an international level when he was included in Billboard's "21 Under 21" list as well as other DJ indices. Now, before the cusp of a quarter-century, he is touring on his second full-length release, Shelter, with fellow 20-something and musical cohort Madeon, who appears on the release. The concept album has been made into a short animated film- following the narrative of Rin, a young girl who lives her life inside a futuristic simulation—a story that has implications on the way we live our lives online now. Openers include San Holo, Danger, Fakear and Robotaki. (Brian Staker) The Complex, 536 W. 100 South, 8 p.m., $22-$32, TheComplexSLC.com

FRIDAY-SATURDAY 12.2-3
Tinsley Ellis
"Can Blue Men Sing the Whites?" That was the question famously asked by Britain's legendary musical misfits the Bonzo Dog Band. And while the irony is all too obvious, it does help define an era when bands from the U.K. famously appropriated black blues and refashioned it in their own image. Ironically, that's the music that initially inspired Tinsley Ellis. Weaned on the sounds of The Rolling Stones, Cream, The Yardbirds and The Animals, he then chose to explore its origins after witnessing a concert by the late, great B.B. King. Nowadays, with a career in full flush and albums of consistent quality released on one of America's foremost blues label, Alligator Records, Ellis himself is setting the standard. Billboard magazine noted, "Nobody has released more consistently excellent blues albums than Atlanta's Tinsley Ellis. He sings like a man possessed and wields a mean lead guitar." Bonzo Dog Band, you have your answer. (Lee Zimmerman) The Egyptian Theatre, 328 Main, Park City, 8 p.m., $19-$34, EgyptianTheatreCompany.org

MONDAY 12.5
Sara Watkins, River Whyless
Sara Watkins has made music most of her life. She began at the tender age of 8 when she, her brother Sean and Chris Thile formed the bluegrass band Nickel Creek. She's been at it ever since, shifting through a string of ensembles—WPA, Mutual Admiration Society and the Watkins Family Hour—although her most distinctive work has found her on her own. While her latest album, Young In All the Wrong Ways, sounds like a soul-baring experience, emphasizing relationships that have been tattered and torn, she insists her life is far more satisfying than these songs imply. "Sometimes you lose track of some of the simple niceties of the job," she says. "I get to play with some great bands. I get to go to great places, and it pays really well. I feel very lucky to be so attached to this thing I've gotten to do my whole life." (Lee Zimmerman) The State Room, 638 S. State, 8 p.m., $23, 21+, TheStateRoomSLC.com

TUESDAY 12.6
Hellrazor, GABI
Relax, this isn't Pinhead from Clive Barker's Hellraiser come to wreak musical damnation. But there is a slight similarity between the horror villain and this New Haven, Conn., indie-rock trio featuring Speedy Ortiz drummer Mike Falcone. The band manages to contain the artsy touches of Speedy with the anger of punk rock on their newest release, Satan Smile (New Professor Music). The title seems perfectly timed to coincide with an episode in the reality shitshow that is 2010s American history—and which might find Beelzebub himself beaming (but, for the rest of us, it's a consummate WTF moment). The disc leads off with "A Cool Mill," a swing for the fences in the "cash rules" postmodern punditry sweepstakes, then flows into the post-grunge number "Allergic" before it slows down with the third song, "Covered in Shit." It's tactical sequencing, cagey in a Stephen Malkmus way, and sinister in that Hellrazor's hooks—kinda like Pinhead's—really grab you. And this is no catch-and-release. (BS) Diabolical Records, 238 S. Edison St., 8 p.m., $5 suggested donation, Facebook.com/DiabolicalSLC