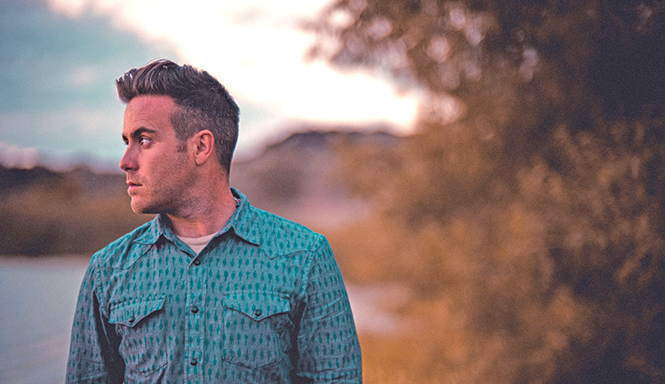 THURSDAY 12/26
Tom Bennett
Based in St. George, but born and raised with a blues background in the Deep South, Tom Bennett is a prolific artist who, despite making his mark as a well-traveled one-man-band, Utah still mostly gets to claim as one of its own. After going on an LDS mission to SLC, Georgia-born Bennett made the Beehive state his home, ironically leaving behind the Mormon part and crafting his traditional blues songs around his many travels—including all the details of a vagabond lifestyle, such as jumping on trains, hitching and other vagrancies. He relies on his harmonica—his preferred brand is Oskar Lee Harmonicas, which also endorses him—as well as his resophonic guitar and foot percussion, to deliver his charming foot-tapping, soulful country vocals. They reliably mirror his wandering spirit—with all its troubles and joys. Yet he's jolly in the many videos he posts of himself playing in some desolate spot, calling for his ruddy-colored dog to stop wandering off as he begins a tune. With roadside cafés, dive bars and any other hole-in-the-wall joint being familiar spaces, he'll fit right in at the Lighthouse Lounge in Ogden at their upcoming Ogden Unplugged open-mic night. Treat yourself to a night of tunes by a man who seems downright bound to the art of acoustics. If he inspires the way he probably will, audience members can hop on stage with a guitar themselves. (Erin Moore) Lighthouse Lounge, 130 25th St., Ogden, 7 p.m., free, 21+, lighthouseogden.com

FRIDAY 12/27
The Great Gig—A Pink Floyd Tribute
Tribute bands are pretty popular these days, and for good reason. For starters, many groups no longer exist, and the only way to experience their music live is through other musicians effectively recreating those distant yet distinct sounds. In fact, sometimes even those groups that claim to be the real deal are—when you consider lineup turnover—really only cover bands themselves; they claim the brand even when only one or two original members still linger. A good tribute band foregoes the pretense, instead simply sharing the sounds as faithfully as possible. The Great Gig does just that, offering sounds and sights that do Pink Floyd justice. Floyd fans can relish the fact that the music is not only presented with creativity and competence, but also that the players are talented enough to tackle those complex sounds. That's no small feat in itself. The fact that a portion of the proceeds benefits the Salt Lake Academy of Music makes it all the more admirable. There's another thing to keep in mind, too: Pink Floyd will never be reincarnated. Original mad-cap Syd Barrett and keyboardist Richard Wright have both gone to that great gig in the sky, and tensions between survivors Roger Waters and Dave Gilmour likely won't be resolved any time soon. So, consider The Great Gig's performance a plausible brick in the wall. (Lee Zimmerman) The Depot, 13 N. 400 West, 8 p.m., $15, 21+, thedepotslc.com

The Violet Temper, Mortigi Tempo, Portal to the God Damn Blood Dimension, Together Forever, The Salt, The Sea and The Sun God
All I ever want for Christmas is holiday music that isn't insufferable. In my long career in retail and service industries, I've searched long and hard for Christmas covers by artists I actually like to play at my places of work, fleeing Michael Bublé at every turn. There's not much, but there's some—Bright Eyes, The Flaming Lips and Weezer all have either done Christmas covers or released original Christmas songs. Indie up-and-comer Sasami just released a three-song Christmas EP called lil drmr bb. So imagine my pleasure at finding that Crucialfest, our local-focused annual festival of the late summer/early autumn, comes to us this holiday season to remedy the pain of hearing shit music—particularly shit Christmas music—for the month-and-a-half leading up to the holiday itself. Crooshmas will host a clutch of locals armed with their own songs, mixed together with a few holiday covers. It'll be fun to see what shoegazers The Violet Temper bring to a song like "The 12 Days of Christmas," which is already repetitive and long—aka, the basic formula of any shoegaze song (this is only a jolly jest). Maybe the macho rocker boys of Mortigi Tempo will take on "I Saw Mommy Kissing Santa Claus." Perhaps Portal to the God Damn Blood Dimension will teleport us to a goddamned "Winter Wonderland." Played alongside their original material, this group of great local bands might reconvert showgoers to tired tracks, and polish off the holiday season with a noisy, rocky kind of cheer. (EM) Metro Music Hall, 615 W. 100 South, 6 p.m., $5 presale; $15 day of show, 21+, metromusichall.com

SATURDAY 12/28
Roccsteady Music, Bipashwi, Theby M, Kenzo, Forskin Boyz, Noyz, T-Tovey
Given how vital the venue has become to Utah's local music scene, it's only natural that Kilby Court has a vested interest in fostering up-and-coming talents from all over the state, with particular focus on local acts on the cutting edge of modern music. For the past few years, that cutting edge has undeniably been the SoundCloud rap and trap scenes. They've flourished just about everywhere due to a DIY attitude and a low bar of entry—i.e., pretty much anyone with a laptop can do it—that some have likened to early punk rock in the 1970s. On Saturday, Kilby hosts a showcase of local rap/trap artists, including (but not necessarily limited to) Roccsteady Music, Bipashwi, Theby M, Kenzo, Forskin Boyz, Noyz and T-Tovey. Many of these artists are still in the early stages of their careers, with little to no recorded output available online. However, from the snippets and songs I was able to hear—mostly from T-Tovey and Bipashwi—it looks like a show that anyone keeping an eye and an ear to new and exciting musical trends won't want to miss. (Nic Renshaw) Kilby Court, 741 S. Kilby Court, 6:15 p.m. $12-$15, all ages, kilbycourt.com

The Spazmatics
Don't be daunted by the name. The Spazmatics are ... well, decidedly strange. Their stage gear could best be described as a blend between prep school chic and early Devo. Former Utah residents, they now reside mostly in L.A., but still fly back on a weekly basis for a standing gig at Liquid Joe's. To paraphrase Tony Bennett, they apparently left their hearts in Salt Lake City. Bizarre behavior aside, they may well be the best 1980s cover band ever, and regardless of whether they're basking in "Purple Rain" or singing the praises of "Jessie's Girl," they add off-kilter visuals that are best seen and heard. To put it mildly, this bunch is as wacky as they are weird, making for decidedly odd live performances. However, even though they're nerds, they get the girls. All the evidence you need is a YouTube video that finds Spazmatics singer Zeek doing some serious stage moves while performing a rousing medley of "That's What I Like About You," "Footloose" and "Living on a Prayer" during halftime for a Houston Texans vs. Jacksonville Jaguars football game. These geeks might be freaks, but the jocks were probably feeling a bit envious watching the band rocking with resolve while the Texas cheerleaders giddily danced along. As for the rest of us, consider this gig another welcome return. Maybe we can't miss them if they don't go away, but who would really want them to? (LZ) Liquid Joe's, 1249 E. 3300 South, 7 p.m., $7, 21+, liquidjoes.net