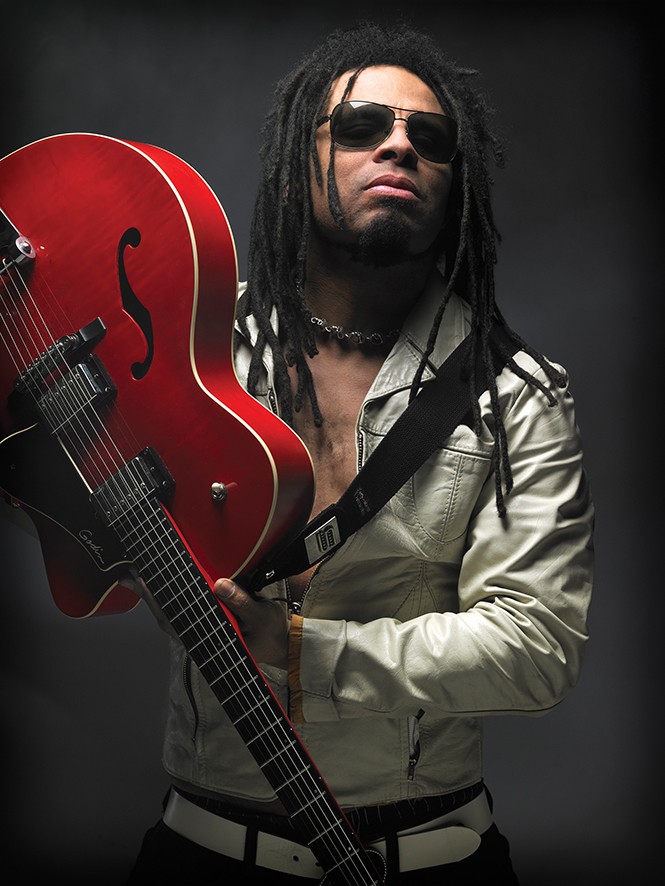 THURSDAY 12/7
Supersuckers, The BellRays, The Bombpops
Remember when it was a big deal that the Rolling Stones had been around for 30 years? And how we all marveled at how a 50-year-old Mick Jagger could still chicken-strut like a mofo night after night? Well, Jagger's now 73, and next year the Supersuckers hit the big three-oh while singer-bassist-hype man Eddie Spaghetti crosses the half-century mark. He's now the lone original member of the self-proclaimed "Greatest Rock and Roll Band in the World," but he's still out there kickin' ass on tour, even after beating Stage 3 throat cancer. And while the 'Suckers ain't the Stones, a whole lot of us feel like they are. You come by that feeling when you see them live. Eddie strides onstage in his aviators, cowboy hat and shitkickers, wielding that slick black Les Paul bass. Then, in a snarl of power chords and backbeat—with twangy acoustic interludes—he and the guys tear through a set of songs about creepy jackalope eyes, weed, birth defects, rock 'n' roll, drinkin', fuckin' and fightin'. In between those, he tells stories and jokes, revealing that underneath all that semi-sardonic rock bombast, Spaghetti's just a goofball—nay, meatball. Nothin' against Mick and the boys, but that's a real rock star. Plus, it'll be a hoot to see him perform "Creepy Jackalope Eye" or "Pretty Fucked Up" as a geezer in 2038. So in the name of rock 'n' roll and shits 'n' gigs, long may Spaghetti rock. (Randy Harward) The Urban Lounge, 241 S. 500 East, 8 p.m., $17 presale; $20 day of show, 21+, theurbanloungeslc.com

THURSDAY, FRIDAY, SATURDAY 12/7-9
Eric McFadden
People always throw around the name Jimi Hendrix when talking about Eric McFadden. Sure, he's a black dude and a guitar hero, but you know who he sounds like more than anyone? Himself. He clearly admires Hendrix, but also Frank Zappa and classic-era Parliament-Funkadelic guitarist Eddie Hazel. And guessing from his music and the company he keeps, you can probably assume a diverse litany of influences including the likes of Chris Whitley, Gary Lucas, Vernon Reid (Living Colour), Joe Strummer, John Bigham (The Soul of John Black, Fishbone), Joey Santiago (The Pixies), King's X, Nick Cave, Johnny Cash and a slew of others. But these references account for only fleeting moments in McFadden's music, which is difficult to classify. It's rock, it's funk, it's country, it's jazz, it's prog—sometimes it even sounds like proto-troll band The Frogs, and it has almost as many circus and clown references as a Luni Troupe record. It's this relentless skill and originality that's made the dude an in-demand session player and sideman for some pretty heavy hitters—and even landed him in Hazel's shoes as lead guitarist on George Clinton's mothership. If only that translated directly to commercial success. (RH) Thursday: Brewskis, 244 25th St., Ogden, 9 p.m., free, 21+, brewskisonline.net; Friday: Piper Down Pub, 1492 S. State, 9 p.m., $5, 21+, piperdownpub.com; Saturday: The Ice Haüs, 7 E. 4800 South, 9 p.m., $5, 21+, icehausbar.com

TUESDAY 12/12
Foo Fighters, Bob Mould
When Nirvana drummer Dave Grohl formed Foo Fighters after Kurt Cobain's death, didn't you wonder just how good the band would be? How many drummers have stepped out from behind the kit to front a band? Not enough to bet money on, right? But the whole time Nirvana existed, Grohl was writing songs in secret, because even he had his doubts about measuring up to Cobain. Twenty-three years later, the band has yet to drop a dud, and Grohl, the long-faced punk, is now one of rock's greatest frontmen and songwriters, not to mention a helluva guy. Foo Fighters is a real rock band staffed with good guys like him, who enjoy the hell out of playing rock 'n' roll for fans, who they treat like friends. They give everything, every night, even when Grohl broke his leg onstage, because he's truly grateful that someone listens to and likes these songs of his. Then he's out there live-trolling the Westboro Baptist Church, sending good vibes to trapped miners, directing excellent films and miniseries that educate his fans about the history of rock—kind of like he's doing on this show, by giving 20,000 people a chance to see Bob Muthafuggin' Mould, the guy behind Hüsker Dü and Sugar. Just when you think the world is in the toilet and there are no heroes, guys like Grohl restore your faith in humanity. He once pretended to run for president on the cover of my old haunt, Harp magazine. Don't you wonder, sometimes, if he should do it for real? I'd bet on him winning—except we need him right where he is. (RH) Vivint Smart Home Arena, 301 W. South Temple, 7:30 p.m., $79-$100, all ages, vivintarena.com

Lindsey Stirling, Alexander Jean
In less than half a decade, 31-year old violinist Lindsey Stirling has risen to the artistic apex of her instrument, as well as innovating her shows by combining elements of dance, performance art and electronic music. Her eclectic musical stylings have garnered several billion YouTube views, plus a spot in Forbes' "30 Under 30 In Music" in 2015. Touring for her fourth album, Warmer in the Winter (Universal), Stirling rounds out a discography in which no release failed to enter the Billboard Top 40. Warmer is widely varied fare, from "Dance of the Sugar Plum Fairy" to "You're a Mean One, Mr. Grinch." Opening is folk duo Alexander Jean, comprised of Mark (middle name Alexander) Ballas and his spouse, BC Jean. The similarly multi-talented Ballas is a musician and choreographer on Dancing With the Stars, where Ballas was also Stirling's dance partner, and they finished in second place on the season that just ended. Their tour pairing bodes for a vastly entertaining holiday show. (Brian Staker) Eccles Theater, 131 S. Main, 8 p.m., sold out at press time, all ages, live-at-the-eccles.com

WEDNESDAY 12/13
Samba Fogo, The Hips
A local nonprofit performing-arts group founded over a quarter-century ago, Samba Fogo is inspired by the passion of Afro-Brazilian music and dance. They have been following a mission that's at least as much educational as performance-based, traveling to schools and other community groups. It's all about the rhythm, and their percussive energy is the source of their fire—quite literally, as the element is a big part of their shows. For them, dance and rhythm become a metaphor for life itself, as a pathway to joy. At this time of year, watching the group perform adds a little bit of Carnival spice into an otherwise wintry season. Salt Lake combo The Hips (pictured) opens, and they add their own percussive flair and flavor with their blend of hip-hop, funk, soul and Afro-Brazilian sounds. They've also shared and traded members with their good friends in Samba Fogo, and tonight is no exception. Co-lead vocalist Emerson Andrews says the band is about to release their second Live on KRCL Radio Active EP, only 14 months after the first one dropped. Andrews says they're looking to add a second musical act to the bill as well. (Brian Staker) Metro Music Hall, 615 W. 100 South, 8 p.m., $5, 21+, metromusichall.com