THURSDAY 2/13
Blood of the Young 3: Sculpture Club, Corner Case
Since 2017, Blood of the Young has been a semi-regular celebration of Salt Lake-based new wave, goth and post-punk featuring, according to a past event description, all the "despair, lace, heartbreak and romance" a local could want. Artists at past years' events have included Fossil Arms, Primitive Programme and Fearing, delivering smoky, synth-driven darkwave and post-punk to venues decked out in goth prom-appropriate decorations like flowers, skulls, velvet and "fog so thick no one will see your tears." This lineup for Blood of the Young 3 is decidedly less synth-oriented, but still supremely dreamy: local artists Sculpture Club and Corner Case perform. Sculpture Club conjure smart, vicious missiles of gloom-rock dripping in fuzz and a nihilistic drawl—imagine The Cure, but wearing boxing gloves. No official word if Sculpture Club's return precedes new recorded music, but based on the fact of bassist Chaz Costello's regular output in Choir Boy, it's fair to hope so. Corner Case, on the other hand, have developed a musky, introspective post punk sound driven by heavy-chorus guitar and saturated vocal melodies. Made up of two members of the popular but now-defunct jangle-rock act Strong Words, plus bassist Paula Bravo, Corner Case will play from their worthwhile October release Haunted House. In addition to live music, Blood of the Young 3 also features DJs, photographers and Instagram-ready coffin displays. It will no doubt be another memorable night of new-wave nostalgia draped in light, fog and lipstick—a small diorama of the broken-heart dreamworld imagined in the goth-prom prototype. (Alex Murphy) Urban Lounge, 241 S. 500 East, 8 p.m., $5, 21+, theurbanloungeslc.com

Marcus King Band, Lee White
Don't let Marcus King's baby face, upper-register vocals or tender years deceive you. At age 23, King is already a well-seasoned performer. You could consider him a child prodigy, given the fact that he's been at the helm of his eponymous outfit for more than a decade, and has been playing guitar since he was a toddler. Nevertheless, King seems to have adapted to that scenario quite well. "I was making executive decisions at the age of 13 and 14," he recalled in an earlier interview with this writer for Relix magazine. "I had older musicians working with me, but I was the one that had to get the check at the end of the night. It all stemmed from my father's advice to be the guy that runs it." Apparently, that proverb worked out well. Mentored by such illustrious guitar gods as Warren Haynes and Derek Trucks, he quickly moved up the ranks while reaping kudos for his band's adept blend of rock, roots and blues. King's credibility is so well established that he's also able to venture out on his own, as his new solo album, El Dorado, demonstrates. Produced by Dan Auerbach and featuring an all-star lineup of superb session players, it shows that even at an age where most folks are still trying to find their way in the world, his stardom is already well-secured. This is one King who deserves reverence and respect. (Lee Zimmerman) The Depot, 13 N. 400 West, 8 p.m., $25-$75, 21+, depotslc.com

Friday 2/14
Guava Tree, Blue Rainboots, Sunfish
In the Logan music scene, a generalist approach will get you a long way. The northern Utah college town simply doesn't have the population to support multiple music scenes operating independently of each other, so it helps to have crossover appeal. In a small, tight-knit music community, developing a sound that just about every music fan can get down with for an hour or so is one of the most important skills to cultivate. Guava Tree seems to understand this intuitively. The psychedelic rock project, spearheaded by singer, songwriter and lead guitarist Sam K. Johnson, has proven itself willing and able to adapt to just about any crowd out there, whether it's a hip indie venue like Kilby Court, a pizza joint like Logan's own Factory Pizzeria, a DIY house show or even an impromptu streetside busking session. Still, as impressively elastic as Guava Tree's performance style is, Johnson's sun-baked, flower child attitude and easygoing, reggae-influenced songwriting style manage to shine through no matter where he and his cohorts might be playing. This Tuesday, Guava Tree returns once again to Logan's premier local music venue WhySound—where Johnson regularly runs the ticket booth and soundboard—for a psychedelic-themed local music night. They'll be joined by Salt Lake psych-folk trio Blue Rainboots and alt-rock outfit Sunfish. (Nic Renshaw) WhySound, 30 N. Federal Ave., Logan, 7:30 p.m. $8, all ages, whysound.org 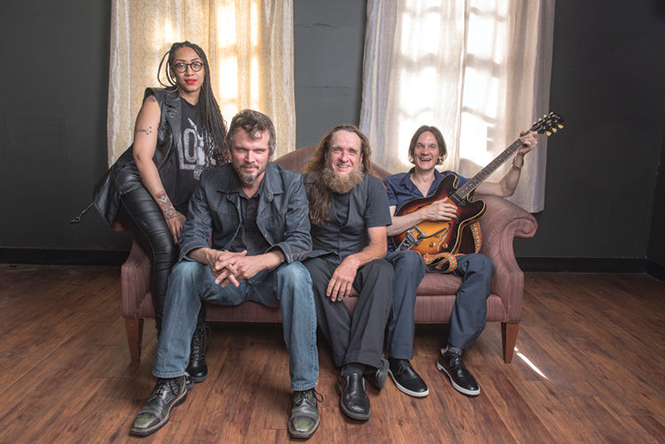 MONDAY 2/17
North Mississippi Allstars
Dual careers can't be easy, so virtual hats off to the two prime members of the Mississippi Allstars, brothers Luther and Cody Dickinson, for dedication to their day job while also sharing their skills with others. Making music is also in their blood: Their dad, musician and producer Jim Dickinson, built a career as a sideman to the stars, with credits that include backing Bob Dylan, The Rolling Stones, The Replacements, Jerry Jeff Walker, Sam and Dave, Aretha Franklin and others too numerous to mention. It might be a bit intimidating trying to live up to their dad's legacy, but the younger Dickinsons have done quite well on their own, courtesy of the 19 albums their band's released since the turn of the century, and the various Grammy nods, chart placements and critical praise that followed. One would think the Dickinson boys could be content to rest on their laurels, focus on their own ensemble and not worry about the freelance opportunities that consistently come their way. Indeed, the duo's recently released album Up and Rolling, an aural snapshot of their namesake environs as it existed in another time and space, which provides further proof that they rank high among today's purveyors of contemporary blues, roots and gospel. So while they'll likely continue to lend their talents whenever like-minded folks like John Hiatt, Robert Randolph and John Medeski come calling, they'll remain certified Allstars while simply playing for the home team. (LZ) The State Room, 638 S. State, 8 p.m., $33, 21+, thestateroompresents.com

TUESDAY 2/18
Murder By Death, Saintseneca
Kentucky-based Southern-goth folk-rockers Murder By Death, by moniker alone, conjure up an indelible image cranked taut with apocalyptic noir. Lead singer Adam Turla's baritone reeks of Johnny Cash, but the band's eighth full-length, 2018's The Other Shore, launches into more futuristic directions. A concept album about Earth's impending end-times and a human population in peril, The Other Shore blends eerie intrigue, emotional circumspection and haunting insight better than any previous entry in Murder By Death's storied discography. Even better, MBD continues to play by its own rules, 20 years after inception. Turla and his wife, Sarah Balliet, self-manage every aspect of the band; they even invested in a Louisville, Ky., Italian restaurant to shore up their finances and provide free creative rein for the band. "Our restaurant is very much like the band in that it's something we turned from a hobby into a profession," Turla told City Weekly in 2018. "We got to try to make a living at something we were passionate about. That gave us confidence to move forward." Tourmates Saintseneca— founded in a small Appalacian town in 2007—exude a similar sense of scrappy self-assurance. Frontman Zac Smith added banjo, mandolin, dulcimer, balalaika, bouzouki and violin to the indie-folk mix after moving to Columbus, Ohio. Four acclaimed full-lengths later, Saintseneca is revered for its quirky art-rock flourishes and reflections on hardened survival. Don't miss these two bands flexing their muscles in between album cycles, with Murder By Death celebrating its milestone 20th anniversary by selecting songs from all eight albums, giving away free zines documenting the band's history, and having fans curate set lists each night. (Nick McGregor) The Commonwealth Room, 195 W. 2100 South, 8 p.m., $27, 21+, thestateroompresents.com