The Toasters, Set It Off, With Confidence, First Daze, deelanZ, Kabaka Pyramid, and more 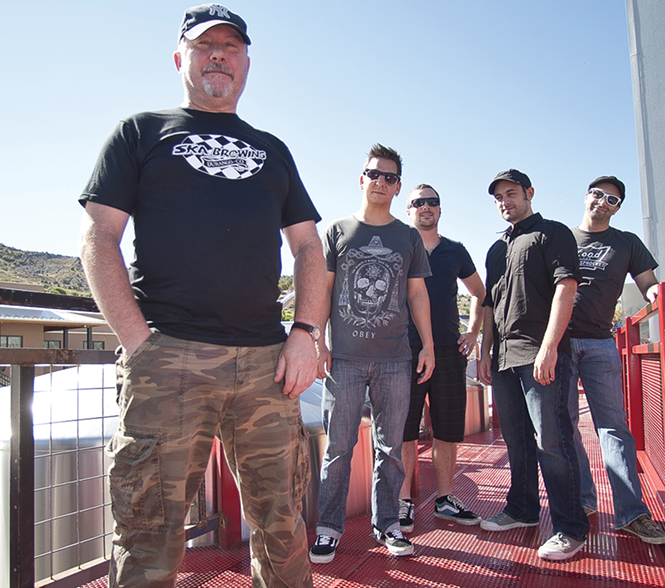 FRIDAY 2/22
The Toasters
Most American ska bands got their start in the early '90s, when the music enjoyed a surging third-wave revival—but not The Toasters. Founded back in 1981 by Englishman Robert "Bucket" Hingley, long before ska attained mainstream popularity stateside, label reps and critics alike laughed at the band's so-called "circus music." So Hingley did what any smart musician would do: He created his own outlet for the band's prodigious discography. By the 1990s, when MTV was elevating The Mighty Mighty Bosstones and No Doubt to rock stardom, The Toasters' Moon Ska Records had become the most respected commercial outlet in the world. The label eventually sold 1.5 million copies of ska records before folding in 2000. Coming up on their 40th anniversary, The Toasters are still soldiering on, touring internationally with the energy of bands half their age and serving as ska's elder statesmen, even as regular lineup changes have become a hallmark of the band. For Hingley, that's fine and dandy; as he told this writer back in 2012, "That's made the band much less reliant on individuals. The hardest thing to organize in this business is people, so having a big international roster of players has not only allowed us to play far more gigs, but also infused a greater amount of creativity into the interpretation and performance of the tunes." As for the bandwagon-jumpers of the '90s? "They've moved on in search of the next big thing," Hingley said, "so us ska janitors can now get the house cleaned up nice and tidy again." Don't miss The Toasters in the intimate environs of Liquid Joe's this weekend. Liquid Joe's, 1249 E. 3300 South, 7 p.m., $12, 21+, liquidjoes.net

SATURDAY 2/23
Set It Off, With Confidence, Super Whatevr, L.I.F.T.
Florida-born and Los Angeles-based quartet Set It Off builds brash, anthemic pop rock out of crunchy guitar riffs and quirky electronic elements. Cody Carson (vocals), Dan Clermont (guitar), Zach DeWall (guitar) and Maxx Danziger (drums) surely make their fans dance, but it's their attention to shake-the-rafters songcraft that sets them apart from the crowded alt-rock crowd. Their last full-length release,Upside Down, was considered by critics a 2016 best-of, following up the chart-smashing sophomore set Duality and debut record Cinematics. But in 2019, Set It Off has a new partner, Fearless Records, pumping up its latest single, "Lonely Dance." The new track serves as a preview of the band's forthcoming album, which promises edgier and even more pop-driven anthems to come. Lead support band With Confidence add depth to the heart-on-sleeve emotion of the night; their new single "Pâquerette (Without Me)" should go down as a classic of the emo-folk genre, but we can't wait to see how the band elevates the song's acoustic guitars to the stage. In the Venue, 219 S. 600 West, 6 p.m., $18 presale; $20 day of show, all ages, facebook.com/inthevenue 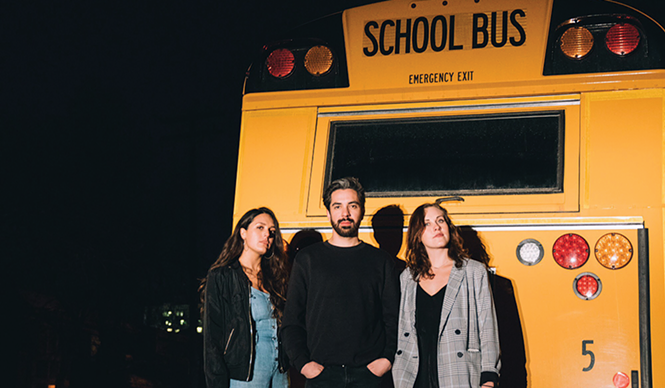 MONDAY 2/25
First Daze, deelanZ, Marny Lion Proudfit
Taylor Lines, Gui Peláez and Benjamin Thornton don't give away much. As First Daze, their Spotify discography extends through all of two songs, "Fat Cats" and "Help! I'm in Love." Still, those two jangly gems contain multitudes: country rock strumming that's reminiscent of the best Laurel Canyon AM gold of the '70s, hazy nostalgia invoked by Lines' and Peláez's otherworldly harmonies and incisive lyrics about late-stage capitalism. A deeper First Daze dive is available on Soundcloud, where a treasure trove of covers and demos stretch back several years. But with the promise of a new EP release at this week's show—and very little fanfare celebrating it in advance—this Salt Lake City trio should surprise. The writer in me wants to know more, but after an hour of digging, I realized that perhaps it's best to let the mystery be and see what First Daze delivers. Marny Lion Proudfit's acoustic allure serves as the perfect opener, while the glam-drenched "self-help existential rock" of deelanZ propels this all-local bill forward. The Urban Lounge, 241 S. 500 East, 8 p.m., $5, 21+, theurbanloungeslc.com 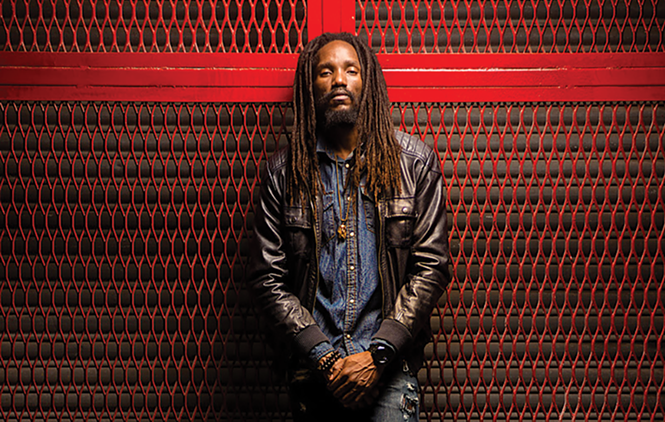 TUESDAY 2/26
Kabaka Pyramid
Reggae is a musical style rooted firmly in the past that still reflects the contemporary developments around it. From the dancehall movement to the internationally successful metamorphosis into reggaeton, forward creative movement is baked into the genre's history. Kingston, Jamaica's Kabaka Pyramid embodies that notion, blending the revolutionary bounce of the roots rock movement with the energy and power of hip-hop's lyricism. Relying on a liquid voice and a hypnotizing delivery, Kabaka (Bantu for "king") Pyramid is intent on disseminating positive messages of spiritual evolution that can also make you dance. Referencing the millennium-old pyramids of ancient Africa as his own blueprint for longevity, Kabaka Pyramid has cultivated a whip-smart "Bebble Rockers" backing band and a global fan-base eager to lap up his teachings. Following the global success of his 2015 smash single "Well Done," Kabaka worked with in-demand producers Major Lazer and Walshy Fire on the Accurate mixtape. In 2017, he topped reggae charts with the anthem "Can't Breathe," the first single off his forthcoming debut full-length, Kontraband, which is being executive produced by reggae icon Damian "Jr. Gong" Marley. Of course, the international field is late to the party; in 2013, Kabaka Pyramid was named breakthrough artist of the year by the Jamaica Reggae Industry Association, and he's been nominated three times for Song of the Year for "No Capitalist" (2013), "Mi Alright" (2014) and "Well Done" (2015). With his eye on the prize of steering future generations of reggae lovers toward the harmony and unity inherent in his music, Kabaka Pyramid leads the way for reggae's next big evolution. Soundwell, 149 W. 200 South, 7 p.m., $12, 21+, soundwellslc.com

WEDNESDAY 2/27
Foxx Bodies, Fountain View, Bitchcraft, Horrible Penny
Tucson-by-way-of-Los Angeles quartet Foxx Bodies mix the personal and political to near-perfect effect. "S.A.D. Christmas" riffs on the existential holiday wish list of lead singer Bella Vanek before lamenting that, "All I came out with was seasonal affective disorder!" It's infectious and ramshackle-y irresistible, recalling fellow Arizona natives AJJ (formerly Andrew Jackson Jihad). Still, there's something equally ferocious and tender about Foxx Bodies and the music they make; Adam Bucholz, Bailey Moses and Matt Vanek provide the spacious swing necessary to let Bella's incisive declamations ring wild and true. Defining their sound as "urgent, clever, energetic, and above all, important," Foxx Bodies don't fuck around; "The Walk" might ride a crushing wave of salty surf rock, but a knife-edged undertow pulls it into darker territory. Forthcoming full-length Vixen dives deeper into traumatic waters, working through critical issues like self-abuse, religious stigma and eating disorders with an unforgiving attitude. Will the new record continue to skew more melodic than the snarl of Foxx Bodies' self-titled and self-recorded 2016 debut, or will the flashes of hardcore anger evident on that release bubble up in Foxx Bodies' more mature work? You'll have to get in the sweaty mix at Kilby Court next week to find out. Kilby Court, 741 S. Kilby Court, 7 p.m., $8, all ages, kilbycourt.com 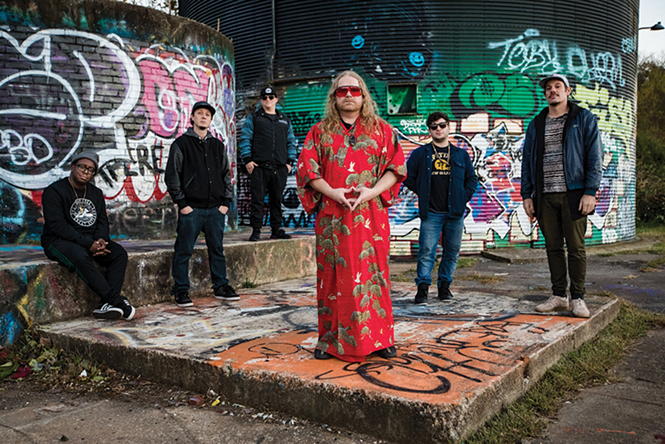 WEDNESDAY 2/27
Lettuce, Greyhounds
With a bag of tricks that includes psychedelic sonics, blissful grooves, jazz rhythms and hip-hop beats, Lettuce have become some of the most technically sharp jam-band gurus of the 21st century. Of course, when you release full-length album tributes to Miles Davis and his contemporary jazz-fusion brilliance, you're going to draw attention. Witches Stew channels the modern interpretative spirit of Thundercat, Flying Lotus and Kamasi Washington, taking what many jazz-heads consider an untouchable golden oldie and turning it into a modern statement on the diversity of our own era. Known equally well for their incendiary live shows and die-hard fans, Boston-born Lettucelends new power to classic funk templates. It doesn't hurt that each of Lettuce's members is a sought-after musician in the hip-hop and pop worlds; Adam Deitchis a member ofBreak Scienceand has played with everyone fromJohn Scofieldand50 CenttoTalib KweliandWyclef Jean, whileErick "Jesus" Coomeshas produced withKanye WestandDr. Dreand served as a touring bassist forBritney Spears andThe Game.But when the full Lettuce collective gets together, all structured bets are off and the high-flying fusion world is their oyster. As saxophonist Ryan Zoidis told High Lark last year, "[Witches Stew] pushed us in a different direction and challenged us to think about improvising differently. It was completely unrehearsed and fresh, which gave it the energy that it needed. That is what we have been developing over the years, and now we can do it comfortably, which is so fun." (Nick McGregor) The Commonwealth Room, 195 W. Commonwealth Ave., 8 p.m., $40, 21+, thecommonwealthroom.com