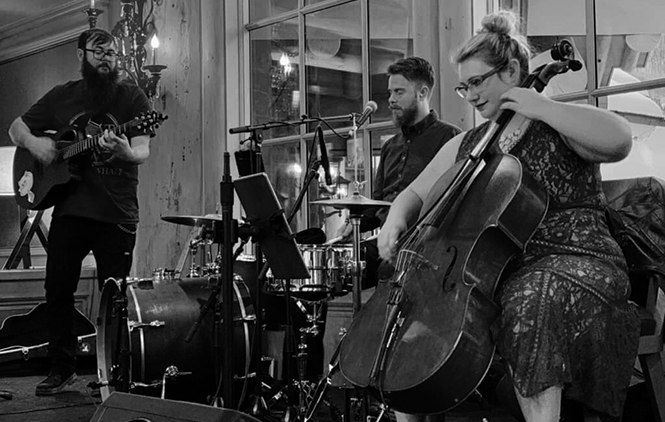 FRIDAY 2/21
Nick Passey and The Perpetual Sadness
The beginning of the year has the tendency to provoke the winter blues in us all. Utah-based trio Nick Passey and The Perpetual Sadness know the feeling all too well, and have their own remedy for combating these wintertime hardships. The folk/Americana group is therapeutically uplifting, with songs touching on relatable situations through a realist and satirical perspective. Passey, the main mind behind the band's work, has been involved in Utah's music scene since he was a teenager. Growing up in a musically gifted family, he was taught to sing at the same time as he was learning to speak. Passey is also a member of beloved local folk-punk band Folk Hogan, but he turned his skills closer to his singer-songwriter roots in 2017 by forming The Perpetual Sadness with cellist Kaitlin Findlay and drummer Curtis Stahl. That same year they released their debut EP Just Working Through Some Shit, which ebbs and flows between a humorous and heartbroken approach to life. Passey sings in the title track "cheaper than therapy to keep writing four-chord songs," alongside a stomping beat and acoustic guitar. But it does sway into a more serious tone with "Non Believer," where Passey evaluates his existential beliefs. Their 2019 single "Love Like Hate" holds true to the matter-of-fact lyrical structure found in their former work. This upbeat, fast-strumming acoustic ditty pairs smoothly with Passey's thoughts about opposing emotions and the confusing similarities between love and hate. Live, Findlay and Stahl complement Passey's vocals with eerie strings and light percussion, making them the ideal band to listen to in a bar setting. Either as a conversation-starter or -breaker, Passey and company will have you clinking beers with your neighbors while tapping your foot to the beat. The group also plays at A Bar Named Sue's Highland Drive location on Saturday, Feb. 22. (Kenzie Waldon) A Bar Named Sue, 8136 S. State, 10 p.m., $5, 21+, nickpassey.com 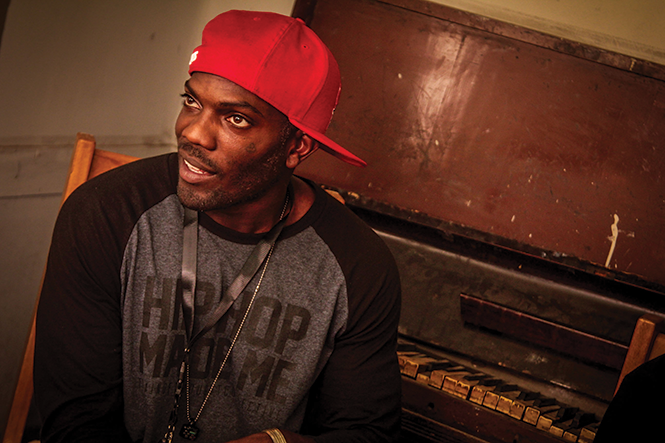 One Be Lo, Freemind Movement, DJ Mixtermike
For those of you who aren't into celestial bodies, a binary star is a star system that's comprised of two luminous balls of gas orbiting an area called a barycenter. In hip-hop, Binary Star was a group consisting of rappers Senim Silla and One Be Lo—they orbited Pontiac, Mich. The duo materialized three full-length albums (sort of): Waterworld, Masters of the Universe and, after the group had disbanded, Waterworld 3. Senim Silla retired from music and went into broadcasting on Shade 45 with Rude Jude, but Lo went on to make more music as a solo act—and he's still roaming the galaxy with his beat machine and rhyme book to this day. You might see One Be Lo in Salt Lake City chilling even when he's not slated to perform. I've seen him at a coffee shop, at Uprok making beats and, of course, at rap shows. "As far as my connection to Utah, I first came out here maybe 20 years ago. SLC has been welcoming and showing love for my art for 20 plus years," Lo says. Not unlike other artistic nomads in the hip-hop hemisphere, the MC's MC seems to be growing bored of the traditional rap format, and has moved on to storytelling and spoken word with no conventional constrictions—at least for now. His new series of albums is called The Looma (or Legends of One Man Army). The five-piece set, parts of which were made in Utah, is something you're just going to have to experience to understand. It's a far cry from the polished bars and smooth delivery of his best-known songs like "Gray," with its free-flowing storytelling. Will he mix it up and perform some of the classics? Will he go into The Looma? Head to the show and find out. (Keith L. McDonald) O.P. Rockwell, 268 Main, Park City, $16-$25, 9 p.m., 21+, shows.oprockwell.com 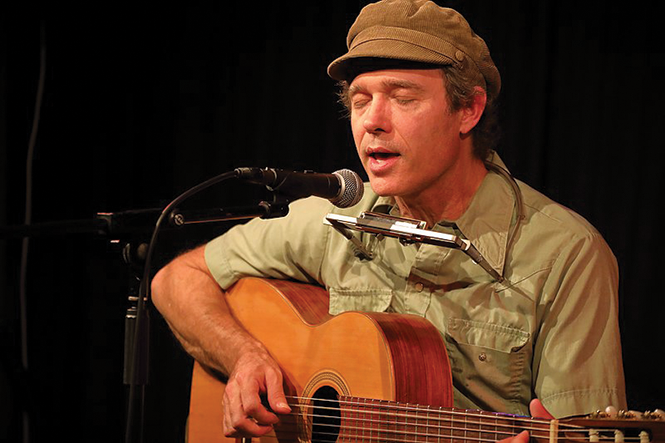 Dennis Callaci, Simon Joyner
Founded in 1990, Shrimper Records specialized from the start in eccentric, lo-fi, underground fare: "pop, industrial, punk and real neato things," as advertised on the cover of their very first cassette release. The solo work of head Shrimper honcho Dennis Callaci skews in a folksier direction, however. On new album The Dead of the Day and new book 100 Cassettes, he intertwines plaintive songs, probing narratives and profound images. 100 Cassettes began as an installation of hand-painted cassette covers for a Pomona, Calif., art museum; Callaci then expanded them into chapters that explore the meditative creativity of musicians as far-flung as Alice Cooper, Earl Sweatshirt, Lee Ranaldo and Black Sabbath. "What a thrill to be sending love letters to artists that are still alive, to profess my love for their work," Callaci told Vol. 1 Brooklyn earlier this month. "I humbly offer this, a time out from the in memoriams of these slumped down times; something living that can take the criticism of falling short of the line." 100 Cassettes is the perfect companion piece to Callaci's meandering new record. The third in a triptych that includes 2016'sBed of Lightand 2017'sThe End of Night, The Dead of the Day strips down to its acoustic roots—no drums and no orchestration, just hushed abstractions like "Scoreless," "Coffin Blues" and "Forecasters of Hurt." Callaci will present work from both projects on his current tour with longtime collaborator Simon Joyner, who himself recently released a new album, Pocket Moon, which blends surreal strands of rural bohemia ("The Last Time I Saw You, Billy") with incisive tales of longing and reflection ("Morning Sun, Slow Down"). (Nick McGregor) Barn Deluxxe, 417 N. 300 West, 8 p.m., $10 suggested donation, all ages

Wednesday 2/26
Hive Live: Tribe of I, Native Leaves, Newborn Slaves
In January, local reggae and jazz fusion band Tribe of I put out a new single from their upcoming album, Life in Dreams—their first in about five years. The single, "Dab Step," is meandering and relaxing in the way only reggae can manage. It builds from a slow energy into jam band solos, and so you really do hear the band's claim that they try to infuse hip-hop, jazz and Latin vibes. "Organic sound, we like to call it," they told City Weekly in 2016. Whatever that means, it's working for them—there's variety in their work. The same is also somewhat true of one of the night's openers, Native Leaves, though they tend to lean more into a hip-hop influence than anything else. Many of the tracks in their 2018 release Season are carrying a reggae ethos on the back of trap and pop rap beats. "On the Low" is a bop even if it feels a little silly at times; "Hit of You" is the kind of song you'd catch yourself genuinely singing along to in the shower. It's hard to not have a fun time with this music: It's groovy and maybe a little too obsessed with weed (the album cover for Native Leaves' single Come Over shows a woman in a bikini sitting with a dog, a tray of weed on the coffee table in front of her), but hey, it's reggae. The connection will probably always be there. (Parker S. Mortensen) Soundwell, 149 W. 200 South, 8 p.m., free with RSVP or $5, 21+, soundwellslc.com 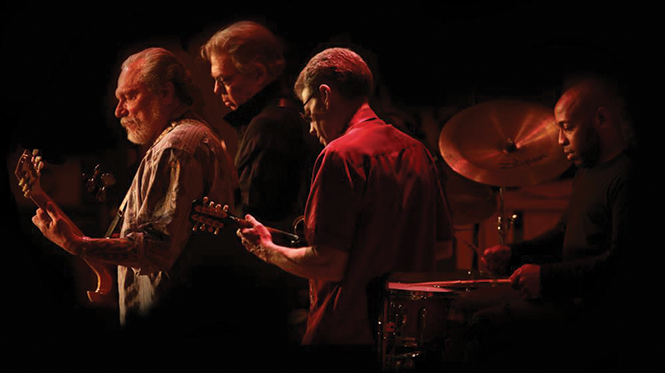 Hot Tuna, David Bromberg Quintet
It's rare to find a band—or even a friendship for that matter—that endures for more than 50 years, given the perils that often accompany a musical career. So credit the two mainstays of Hot Tuna—guitarist Jorma Kaukonen and bassist Jack Casady—with not only surviving but thriving. The fact that their music taps into a traditional template—archival blues—makes their accomplishment even more unlikely. They've never been especially hip or trendy, yet they've still managed to attract legions of devotees who relish the simplicity, skill and care imbued throughout the Tuna trajectory. Initially an offshoot of the Jefferson Airplane—Kaukonen's song "Good Shepherd," a traditional blues tune included on the Airplane's Volunteers album, previewed what was to come—Hot Tuna manages to outlive that initial association and become an institution in its own right. The duo maintain a dual identity, courtesy of electric and acoustic incarnations that find them adding different players to fit each format. Still, it's that core connection between the two principals that makes this ensemble so unique. Their brotherly bond began as teenagers in the 1950s when both were living in Washington, D.C., and it further flourished when Kaukonen joined the fledgling Jefferson Airplane and recruited Casady to help anchor the rhythm section. Openers the David Bromberg Quintet are an engaging ensemble that fosters roots relevance through music of a vintage variety. Two perfect pedigrees create a classic—and classy—combination. (Lee Zimmerman) The Commonwealth Room, 195 W. 2100 South, 8 p.m., $55, 21+, thestateroompresents.com