THURSDAY 2/28
Muse, Walk the Moon
The stadium-stomping English rock band Muse has a history of throwing fans off its tracks. Frontman Matt Bellamy promised a 15-minute space-rock guitar solo on 2009's The Resistance, but somewhere along the way the "solo" turned into the three-part "Exogenesis Symphony," which was a full-blown symphony. It wasn't exactly a disappointment —"Exogenesis Symphony Pt. 1: Overture" absolutely slayed live—but it also wasn't anything close to what was advertised. The bombastic three-piece continued giving everyone the runaround in the lead-up to its Grammy Award-winning 2015 album Drones, promising a back-to-basics approach that wouldn't rely on so much studio magic. In Muse's sci-fi world, "basic" turns out to mean a high-concept heavy metal album helmed by AC/DC producer Robert John "Mutt" Lange, featuring a 10-minute centerpiece ("The Globalist") and a marathon tapping solo ("Reapers"). So, naturally, skepticism abounded when Bellamy, fresh off the Drones tour, announced that Muse had grown weary of big-budget productions and would head into the studio to record an acoustic album. Sure enough, the project turned into what drummer Dominic Howard now describes as a "sci-fi neon electronic extravaganza." Indeed, the end product, last year's Simulation Theory, is so far over the top it's pushing through the exosphere. The Simulation Theory World Tour promises to be equally bonkers, as the band has revealed that an enormous killer cyborg that shoots lasers from its mouth will preside over the band onstage. (Howard Hardee) Vivint Smart Home Arena, 301 W. South Temple, 7:30 p.m., $39-$94, all ages, vivintarena.com

FRIDAY 3/1
Lords of Acid, Orgy, Little Miss Nasty, Genitorturers, Gabriel and The Apocalypse
The early '90s was a Euro-invasion blur of sex-driven, eye shadow-wearing, chain-wielding ravers "smacking bitches up." It was a great time indeed, but when the age of the internet came, everything changed. MTV started axing the M from its network, people started downloading music instead of buying records and many in the industrial/electronic genre were unprepared to endure the dawn of the new millennium. Lords of Acid were not one of those groups. Founder Praga Khan kept his fans waiting for six years before releasing his latest album, Pretty In Kink, on a quest to remind America and the rest of the world about the "pleasures of drugs, hedonism and deviant sex." Let's be honest: With the recent government shutdown and fight over the wall President Donald Trump wants to erect on the southern border, we could use a night of pleasure. Despite frequent lineup changes (and Khan himself going solo), these acid-infused Belgians continue to reshape house music and the new beat genre. Before Pretty In Kink dropped, Lords of Acid's supercharged frontwoman DJ Mea left the group, leaving fans bewildered about the band's fate. Around that time, Khan enlisted fellow Belgian Marieke Bresseleers to take over lead vocals. Fans across America will get a first chance to witness what Bresseleers brings to the table. Plus, industrial death-pop band Orgy comes back from a long hiatus for the show. Pair that with hardcore music from Little Miss Nasty, Genitorturers and Gabriel & The Apocalypse and we're totally bringing the '90s to life in Salt Lake City. (Rachelle Fernandez) The Complex, 536 W. 100 South, 6:30 p.m., $24.50, all ages, thecomplexslc.com 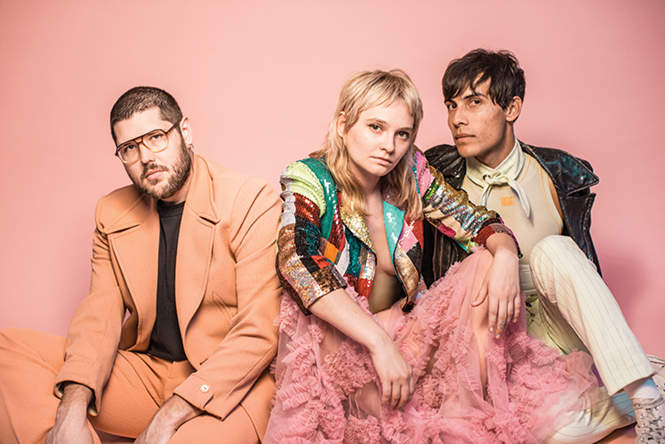 SATURDAY 3/2
Cherry Glazerr, Palehound
Hatched by then-15-year-old Clementine Creevy in her bedroom, Los Angeles-based Cherry Glazerr has grown along with Creevy since its first album, 2014's Haxel Princess. The band's loud, fuzzy, guitar-heavy rock and gliding, compulsive hooks have gained clarity and edge, looking outward on 2017's Apocalipstick. An incisive social commentary on ingrained sexism, the vagaries of navigating early adulthood, art and love, capitalism, the mind-numbing nature of the 9-to-5 and instant gratification, it's a gem: "I told you I'd be with the guys/ But I know better now than to be with the guys," Creevy wails and sighs on the album's catchy, spiteful, regret-tinged first number. Now, with 2019's recently released Stuffed & Ready, Creevy looks inward, coming to terms with herself. "I'm exploring my own self-doubt," Creevy said in a news release for the album. "With Apocalipstick, I was an overconfident teenager trying to solve the world's problems. With Stuffed & Ready, I'm a much more weary and perhaps cynical woman who believes you need to figure out your own self first." Pitchfork writer Maggie Lange describes the album as "a document of exhausted fury," with Creevy "sound[ing] like she heard about some unacceptable bullshit and came into the studio the next morning, red-eyed and short-tempered and uninterested in hiding it." It's a witness of what it's like to be a woman now, in this world: tired of having our power challenged, over the men treating us like toys to be set aside later, holding our tongues, seething with anger—but frankly kind of bored of it all. Boston indie-rock trio Palehound opens. (Naomi Clegg) Kilby Court, 741 Kilby Court, 7 p.m., sold out as of press time, all ages, kilbycourt.com

SUNDAY 3/3
Action Bronson
I must admit, when I first heard Action Bronson, I thought he sounded like Ghostface Killah, as did many rap fans. The voice inflection, the sensory details dripping from the aural canvas, the descriptive imagery of the good life, the confidence and swagger of a demigod—it was all there. But so was conflict. In 2015, when Bronson collided with Ghostface Killah over an interview on ESPN, I thought his career could have been cut short. Wu-Tang fans, affiliates and even Tony Starks himself were all at Bronson's neckbeard, a situation that can lead to an early retirement in more ways than one, as New Yorkers and rap lovers alike know the Wu is nothing to fuck with, on and off the mic. How Action Bronson survived that beef to become one of contemporary hip-hop's tastemakers is a story that sells. The 35-year-old Flushing, N.Y., native is now doing his thing as a talk show host, publisher and traveling food connoisseur. No matter whether he calls himself Bam Bam, Bronsoliño, Mr. Baklava or his traditional moniker, Action Bronson has distanced himself from comparisons by letting his larger-than-life personality shine through. Bronson puts on an entertaining stage show, including everything from kicking several stage-crashers off-stage WWE-style to getting kicked off-stage himself by security. One Christmastime, he threw $2,000 worth of gifts into the crowd. He might just pull up a seat and relax and smoke a joint for a song or two—or let an instrumental set play while he eats a sandwich right fast. If past shows are any indicator, he might even start the show from a golf cart or port-a-potty. Be at The Depot to see what Action Bronson has planned for the Wasatch Front. Just don't jump on stage (unless you have comprehensive health insurance). (Keith L. McDonald) The Depot, 13 N. 400 West, 7 p.m., $40, 21+, depotslc.com 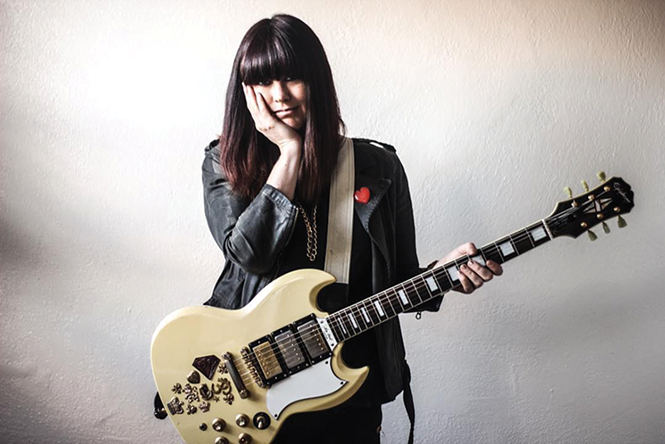 MONDAY 3/4
Vanessa Silberman, Carissa Johnson
Sometimes the hardest-working individuals are the ones you never hear of. Blame lack of media exposure, limited promotion, scant resources or simply the abundance of other artists who crowd the spotlight. Whatever the reason, lack of wider recognition doesn't negate the talent any given artist has to offer. Consider Vanessa Silberman—a singer, guitarist, record company owner and relentless rocker who has notched an EP and several singles on her own A Diamond Heart Production label, along with some 650 concerts and 17 tours of Europe and the U.S. in three years alone. In addition to opening for Alkaline Trio, Selector Dub Narcotic and The Breeders member Kelley Deal's new band R. Ring, Silberman also earned a slot on last year's Vans Warped Tour and was featured at the NAMM Show and the Star City Music Festival. Clearly, she has the energy and enthusiasm needed to attract more overall awareness. Little wonder, then, that her boldly named "Bigger & Better Tour" (also featuring Carissa Johnson) affirms that her duo's reputation as "hardest working band of 2017 & 2018," awarded by woman's music blog Audiofemme, was obviously well deserved. (Lee Zimmerman) Hotel RL, 161 W. 600 South, 4:30 p.m., free, rllivingstage.com; Lighthouse Lounge, 130 25th St., Ogden, 8 p.m., free, lighthouseogden.com

TUESDAY 3/5
North Mississippi Allstars
When a band's two prime players happen to be the offspring of an iconic artist, it's reasonable to expect the results will be something special. That means it was incumbent on Luther and Cody Dickinson—aka North Mississippi Allstars—to create an indelible impression even at the outset. Their dad, Jim Dickinson, was a renowned musician and producer with credits that included work with the Rolling Stones, Bob Dylan, Ry Cooder and other legends. There's something to be said about family legacy, but the demands of living up to that heritage can also be somewhat intimidating. Happily, Luther and Cody are up to the challenge. Their first album, Shake Hands With Shorty, garnered the group a Grammy nomination for Best Contemporary Blues Album, a feat repeated with the release of their two subsequent efforts. That's in addition to the Blues Music Award they were awarded in 2001 and the No. 1 spot reached on the Billboard Blues Charts for album No. 8, Prayer for Peace. In addition, North Mississippi Allstars have become one of the better bands to call when session assistance is needed, as John Hiatt, Robert Randolph, John Medeski and the Black Crowes, with whom Luther has occasionally moonlighted, can attest. It's easy to understand how this band actually lives up to its Allstar billing. (Lee Zimmerman) The State Room, 638 S. State, 8 p.m., $32, 21+, thestateroom.com