THURSDAY 2/6—SUNDAY 2/16
Howard Jones
It's been approximately 35 years since Howard Jones became a chart-topping pop staple whose series of milestone hits ("What Is Love," "New Song" and "No One Is To Blame" among them) found both a comfortable niche between the post-New Wave, New Romantic, synth-pop style of the '80s and an overt accessibility factor that helped ensure his star status. Although he's no longer at the forefront of today's musical elite, he continues to work the road and remains active in a variety of progressive pursuits. He's toured with Ringo Starr, Culture Club and Orchestral Manoeuvres in the Dark, and has collaborated with plenty of choral, electronic and like-minded musicians. "I've always believed in working with the situation you've been given," he once told this reporter in an interview for Miami's New Times. "Rather than wish I was in another place or dealing with different circumstances, I'm always trying to advance and push things forward." No longer concerned with simply having hits, this 60-something artist seems quite content to pursue his musical whims and let the pundits perceive him as they will. "It would be great if every new record I do is a massive success, but I know that's not going to happen," he admitted in that same discussion. "As long I can remain creative, I'm happy to simply strike a balance and not be discouraged." Whether you're a rock star or simply a civilian, those are indeed wise words. (Lee Zimmerman) Egyptian Theater, 328 Main, Park City, 8 p.m. Monday-Saturday; 6 p.m. Sundays, $39–$59, all ages, egyptiantheatrecompany.org

SUNDAY 2/9
Ingested, Visceral Disgorge, The Last Ten Seconds of Life, Cabal, Wrathspawn
Ahh ... slamming brutal death metal. In the extended family of metal subgenres, it never has quite reached the same levels of acclaim as more high-minded siblings like doom metal, new wave of British heavy metal (NWOBHM) or thrash metal. Still, the scene has maintained a large enough contingent of consistently solid artists to protect it from the scorn heaped upon the likes of nu metal or metalcore. Ingested typify that consistency: They aren't interested in reinventing the SBDM wheel, but that doesn't mean they can't still crank out quality wheels like nobody's business. Initially distinguishing themselves via an over-the-top, scatological lyrical bent, the British quintet has gradually transitioned away from the blood 'n' guts to more meat-and-potatoes death metal fare. However, they have more than made up for it by simultaneously evolving into a machine-tight riff factory, serving up four-minute chunks of mosh fuel with just enough variety to keep their steadily-growing fanbase satisfied, even taking a few brief forays into more atmospheric material on 2018's The Level Above Human. Ingested is currently on tour celebrating the 10th anniversary of their debut album Surpassing the Boundaries of Human Suffering, and make a stop at Kilby Court along with fellow slam stalwarts Visceral Disgorge and The Last Ten Seconds of Life. Danish deathcore up-and-comers Cabal and local death metal foursome Wrathspawn open. (Nic Renshaw) Kilby Court, 741 S. Kilby Court, 6:30 p.m. $15, all ages, kilbycourt.com

Wolf Parade, Land of Talk
After taking a five-year hiatus in 2011, Wolf Parade returned in 2016 with a self-titled EP and their fourth studio album a year later. Now, in January, they released their fifth album Thin Mind, and it continues the band's indie rock sound in ways not at all groundbreaking but still welcome. It feels made to be played in the car, on the way to work or a first day of school. The vibrancy of the lead track "Under Glass" would have made it an instant classic in Wolf Parade's heyday, but 2020 is a crowded time even for exceptional indie rock. In some moments, it feels like a sound to have grown out of, and yet at the same time, it's comforting to relish in chasing the familiar highs of Wolf Parade's aughts albums. Meanwhile, Land of Talk has yet to gift us a new album since 2017's Life After Youth, but it's hard to rip away from the classics found in 2008's Some Are Lakes or 2006's Applause Cheer Boo Hiss. Land of Talk's brand of indie rock feels timeless in comparison to Wolf Parade's; both belong to a time and place, and neither shy away from this, but where Life After Youth feels like visiting home, Thin Minds can feel like moving back in. Sometimes we want that, and sometimes we need it. It will be strange to hear these nostalgic flavors in conversation with each other, but maybe that's something we need, too. (Parker S. Mortensen) The Urban Lounge, 241 S. 500 East, 9 p.m., $30, 21+, theurbanloungeslc.com 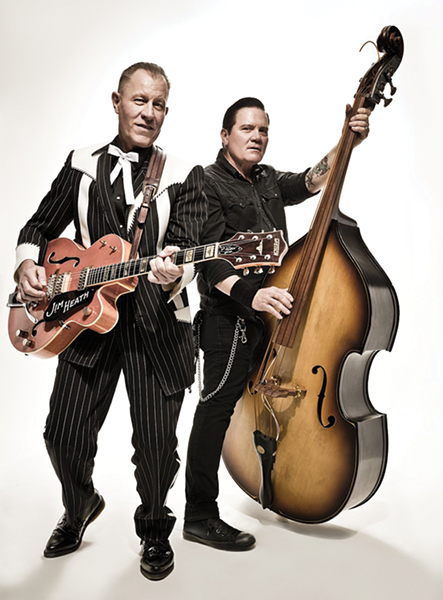 Tuesday 2/11
Reverend Horton Heat, The Buttertones, The Koffin Kats
Whether you have a seasoned psychobilly ear, or you're just dipping your toes into the genre, Reverend Horton Heat are an essential fixture to any psychobilly (or generally punk) playlist. The Dallas-based group has established themselves as one of the biggest names in the genre, consistently pulling crowds year after year, tour after tour. Since their formation in 1985, "The Rev" has released 12 studio albums—one of which was a Christmas album—the most recent being 2018's Whole New Life. Reverend Horton Heat are psychobilly trailblazers, keeping the genre fast, relentless, genuine and light-hearted—qualities evidenced in their exciting and enthralling live performances. They lace their lyrics with clever, boyish charm and old-fashioned humor that can't be beat—whether it's a song about bales of cocaine falling from the sky, or euphemisms about teaching someone how to eat. Supporting acts The Buttertones and The Koffin Kats have impressive cult followings of their own, and the amalgamation of all three psycho-staples is sure to cause a real-life psychobilly freakout. Where The Buttertones introduce more of a surf rock vibe to the lineup, The Koffin Kats double down on the punk-y, horror-show elements of psychobilly, making for a well-balanced evening of good old-fashioned fun. (Zaina Abujebarah) The Depot, 13 N. 500 West, 7 p.m., $20, 21+, depotslc.com

TUESDAY 2/11
Homeboy Sandman, Quelle Chris, T-James
Hip-hop continues to fragment itself into Soundcloud sub-niches and internet-fueled hobbit holes of specificity. But while hype hunters chase the next best thing, the finest work is increasingly made by quiet elder statesmen and women who flex their muscles and tweak their flows with confidence and maturity. Queens rapper Homeboy Sandman recently released his ninth full-length album, Dusty, and it's his most raw and unvarnished yet, after parting ways with longtime label Stones Throw. Traditional boom-bap beats from long-running partner Mono En Stereo lay a sonic groundwork for Sandman's fiery, precise rhymes form as he deals classic braggadocio on "Yes Iyah": "Greatest look since dinosaurs and the protozoa/ Greatest hooks since southpaw Rocky Balboa." Dusty lays that kind of MC supremacy on thick, with Homeboy Sandman proclaiming on "Always" that "I deal in the absolutes/ Exact as a science/ One synapse at a time's how I spend my whole life." For hip-hop heads, it's gold, cutting old-school zeal with modern-day irreverence. On his current tour, Homeboy Sandman teams up with Mello Music Group labelmate Quelle Chris, whose last two albums—2018's Everything's Fine and 2019's Guns—deliver sobering skewerings of America's darkest sociopolitical depths. Sandman and Chris have caught flak for years about being too weird for mainstream success, but as the latter says on last fall's banger "Obamacare," "I was never weirdo/ They just had to acclimate." Get right with these two underground legends now before they break big. (Nick McGregor) The Urban Lounge, 241 S. 500 East, 9 p.m., $13 presale; $15 day of show, 21+, theurbanloungeslc.com

The Fred Eaglesmith Show with Tiff Ginn
Given his satirical and oftentimes cynical point of view, it would be easy to label Fred Eaglesmith as the clown prince of today's wandering minstrels. However, it would also be a misnomer. Carrying a Dylan-like stature in his native Canada, Eaglesmith mixes wisdom and irreverence in equal proportions, thanks to character-driven narratives that proclaim peaked emotions and lofty intents. His dedicated legion of followers—dubbed "Fredheads"—attests to his humor and humility, offered with an Everyman point of view. Likewise, his ability to skewer daily absurdities makes the patter he injects into his performances a welcome respite from today's travails. A freewheeling rambler for the better part of the past 30 years, Eaglesmith evokes the wanderlust of a dust-blown Woody Guthrie and the truths of a modern day Will Rodgers. Along the way, he's had his songs covered by Nashville's finest, and garnered the prestigious Juno award, Canada's version of the Grammy. Wife Tiff Ginn provides his admirable backup, and though the multi-instrumentalist sometimes seems to (literally) play second fiddle, her deadpan persona balances her husband's roguish wit. When she takes the mic, she becomes a veritable chanteuse with a prowess all her own. As a result, she ably underscores the cumulative Fred cred. (Lee Zimmerman) The State Room, 638 S. State, 8 p.m., $25–$35, 21+, thestateroompresents.com