by Naomi Clegg and Nick McGregor 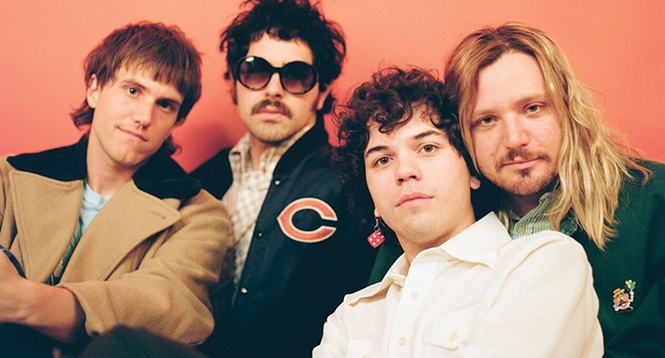 FRIDAY 2/8
Hunny, Hockey Dad, Pllush
Hunny's pop-inspired alt-rock starts off sounding as bright as the band's Southern California home. But sadness lurks underneath the shimmery sheen of their two EPs, 2017's Windows I and 2018's Windows II. Debut single "Cry for Me" nodded as much to the post-punk roster of label Epitaph Records as it did to The Cure. But once the six-piece slimmed down to a quartet—guitarist Jason Yarger, guitarist Jake Goldstein, bassist/keyboardist Kevin Grimmett and drummer Joey Anderson—their sound tightened up accordingly, providing soaring modern lines mixed with the timelessness of Prince's funk. Watching frontman Yarger effortlessly glide through verse after verse of passionate vocals recalls the lightning strike of The Strokes circa 2001, and although Hunny hail from the coast opposite Julian Casablancas and co., the satisfying sneer is still there. Get to this show early for Australian surf-rock duo Hockey Dad, who shred their instruments within an inch of their lives while tempering things with jazz-inspired control, along with San Francisco's Pllush, proponents of a dreamy shoegaze hybrid whose 2018 Stranger to the Pain provides a crushingly beautiful listen. (Nick McGregor) Kilby Court, 741 S. Kilby Court, 7 p.m., $16 advance; $18 day of show, all ages, kilbycourt.com

SATURDAY 2/9
Pedro the Lion, Tomberlin
Before there was Modest Mouse and its catchy, complex indie rock, there was Pedro the Lion, David Bazan's vehicle for grappling with faith and conviction. The Seattle band's first four albums set the template for every emo-inspired act that followed, but Bazan disbanded the outfit in 2006 in favor of performing under his own name and that of several new bands, a move he derided to NPR last November: "I've made music under many brand names. It was a dumb idea. Don't do that if you're trying to make songs over your life." No matter the moniker, though, fans remain devoted to Bazan's painfully personal perspective and thoughtful orchestration. So Pedro the Lion's return on new album Phoenix is less glorious rebirth and more quiet revival, with Bazan mining his childhood time spent in the Arizona metropolis for discarded details and wrenching reinterpretations of time-skewed memories. Opener Sarah Beth Tomberlin provides the perfect present-day counterpoint to Bazan's brand of nostalgia. Tomberlin's debut album At Weddings laments the rootlessness of a child raised in a strict Baptist home who now longs for love and acceptance. "My No. 1 goal with my music is for honesty and transparency that helps other people find ways to exist," Tomberlin says in a news release. She and Bazan should get along swimmingly. (NM) Metro Music Hall, 615 W. 100 South, 8 p.m., $20, 21+, metromusichall.com 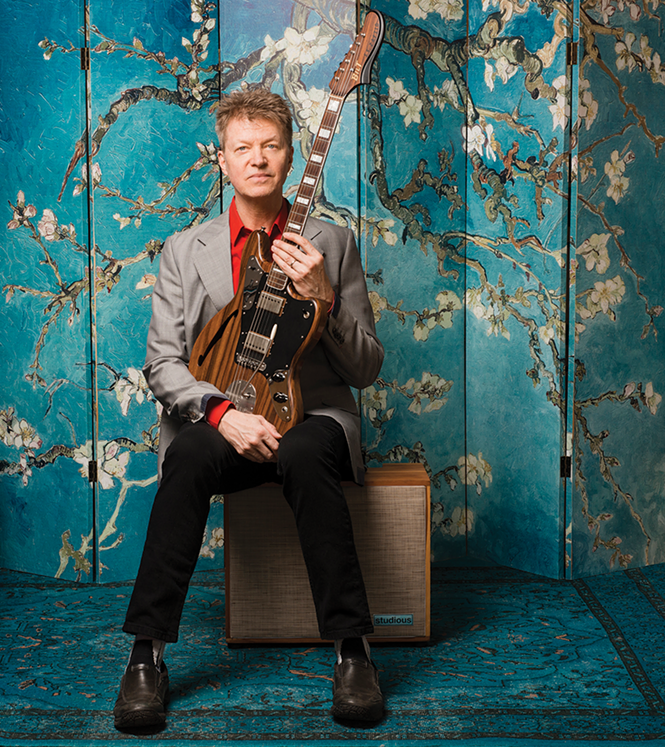 MONDAY 2/11
The Nels Cline 4
How do you sum up the career of an artist as prolific as Nels Cline? How about this: saying the 63-year-old served as the lead guitarist of alt-country titans Wilco for 15 years doesn't even scratch the surface. In 2016, Cline released his debut album on revered jazz label Blue Note, expanding his fretboard expertise into far-flung, often avant-garde territory; on 2018's Currents, Constellations, with his full band The Nels Cline 4, no American sub-genre is safe from deconstruction and reassembly. On "Swing Ghost '59," Cline and co. dissect the precise moment when slippery jazz time signatures were replaced by rock 'n' roll's unrelenting 4/4 beat; on "Imperfect 10," a funk sashay bobs and weaves alongside harmonized lead runs by Cline and fellow guitarist Julian Lage. Meanwhile, bassist Scott Colley and drummer Tom Rainey throw caution to the wind, jumping in and out of rhythm to lend the album a hard-edged thrust. Bassist Jorge Roeder fills in for Colley on this current tour, but reviews of the quartet's shows have uniformly gushed with admiration. If your ear bends even an inch toward jazz, you won't want to miss The Nels Cline 4's instrumental fireworks. (NM) The State Room, 638 S. State, 8 p.m., $30, 21+, thestateroom.com 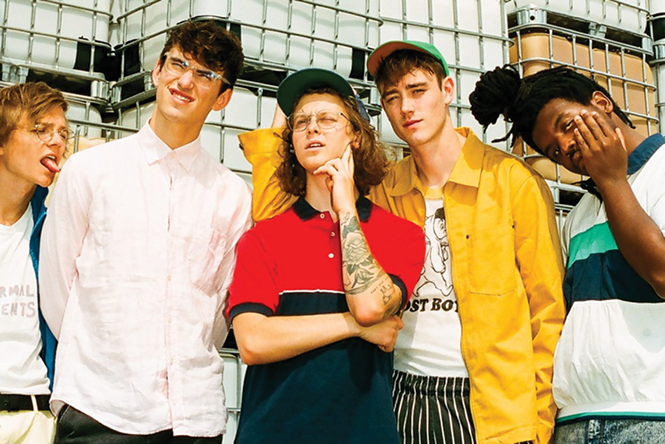 Hippo Campus, Now Now
Even if you haven't heard of Hippo Campus, you've probably listened to them. This "kinda pop" five-piece of 20-somethings has racked up millions of Spotify plays and been embraced as indie-pop darlings by NPR and Paste. The St. Paul, Minn., band broke out as rising stars at SXSW, introducing their first EP, Bashful Creatures, which was produced by Alan Sparhawk, who writes hauntingly lyrical melodies as Low. The quintet toured the next year with indie-rock favorites, including Modest Mouse and My Morning Jacket, and played the festival circuit. They released their second full-length album, Bambi, in 2018; The Boston Globe called it a "massive step forward" for the band, with a fuller sound marked by synth and programmed drums. The album's title song is bouncy and reflective, the kind that makes you want to dance despite its lyrics: "I want to run from everything," lead singer Jake Luppen laments. "I think that I'm living/ If you could call it living." Then, decisively, he closes by declaring, "I'll be making my own way now." The album seamlessly navigates the existential despair and exultant joy of a young person in their 20s; Luppen said of the album, "It's about sharing what you're going through, so maybe someone else will feel less lonely." While the hippocampus might be the brain's memory center, there hasn't been an album more stick-in-your-brain catchy than Now Now's 2018 release, Saved. A marked transition from their atmospheric, mournful 2012 LP Threads, Saved is direct, deceptively upbeat confessional pop that marks a long road of self-discovery for duo Cacie Dalager and Bradley Hale. I've been listening to it obsessively since last summer. This is an opener to show up for. (Naomi Clegg) The Depot, 400 W. South Temple, 7 p.m., $22 presale; $25 day of show, all ages, depotslc.com

TUESDAY 2/12
Aja, London Skies, Delta Rae Dixon, Marrlo Suzzanne, Jafabulous, Icky Rogers, Wiltavious, Kay Bye, DJ M*sc
Aja embodies the multi-faceted success so many of today's drag performers have attained. Yes, they got their first big break on Season 9 of RuPaul's Drag Race, coming back last year to compete on RuPaul's Drag Race All Stars 3. But this Brooklyn queen used that exposure as a jumping-off point for musical achievements, unleashing the In My Feelings EP last year before following up with Box Office, the release of which will be celebrated right here in Salt Lake City. Aja started writing rhymes as a teenager, posting self-described "terrible raps" on Tumblr, but their attention was diverted by drag for several years. Now, they feel ready to embrace a more all-encompassing personality. "I'm not getting away from drag, but I'm in the process of blurring the idea of drag and gender completely from my music," the performer told Metiza last May. "I don't want people to look at my music and say, 'Oh, you're just a drag artist who's pursuing music.' I want to be recognized as a musician who happens to do drag." With past singles like "Art Jesus" and "Brujería," Aja did that in spades, exploring their love for abstract art and the Afro-Caribbean practice of santería over fire-spitting verses and club thumps. Arrive early for plenty of other performances by drag stars from near and far, along with beats by DJ M*sc. (NM) Metro Music Hall, 615 W. 100 South, 10 p.m., $20-$40, 21+, metromusichall.com

WEDNESDAY 2/13
2Cellos, John McLaughlin
It seems like the most unlikely thing ever, but somehow the Croatian duo of Luka Šulic and Stjepan Hauser have become international superstars by playing, yes, two cellos. Of course, transforming pop standards into technically sharp classical renditions is nothing new. But Šulic and Hauser elevate the art form to new heights on their 2018 album Let There Be Cello, which reworks everything from synth-pop to reggaeton to stadium-rock standbys. A video for the record's lead single, "Pirates of the Caribbean," finds the two decked out in full Blackbeard garb off the coast of Dubrovnik, alternately heightening the cinematic crash of classic pirate movies while celebrating their own roots on the Dalmatian Coast. Tearing their bows to pieces while they treat their cellos the way Jimi Hendrix treated his guitar, 2Cellos have sold out legendary venues like Radio City Music Hall and the Sydney Opera House, and their 2017 United States tour sold more than 150,000 tickets. Now that they're done opening for and backing Sir Elton John, Šulic and Hauser hit the road again with dreams of international cello domination. Pop pianist Jon McLaughlin is left with the unenviable task of opening for these two stringed specialists. (Nick McGregor) Vivint Smart Home Arena, 301 W. South Temple, 8 p.m., $36.50-$62, all ages, vivintarena.com