THURSDAY 2.9
The Rock Princess Trio; Bliss Witch; Somebody, Anybody
Sofia Scott emerged from the suburbs of Salt Lake City to fill a niche as a femmale musician and performer, and become a local pioneer in the relatively new genre of trans rock. After appearing solo last fall at the SLC SlutWalk and the Dark Arts Festival, The Rock Princess returns with a trio to rock thrice as hard. She has already shown a prowess with sensually sung dance numbers and a Faith No More tribute, proving that "Pink Is Punk," as heard on her Soundcloud page. "Dare to be different!" she ebulliently exclaims. Bliss Witch is '90s-style alternative rock perfect for flying the flannel, and maybe donning your old Docs and blissing out. Formerly known as Stranghers, the similarly ratioed Somebody, Anybody plays peppy pop rock that is far from anonymous. (Brian Staker) Kilby Court, 741 S. 330 West, 7 p.m., $6, kilbycourt.com 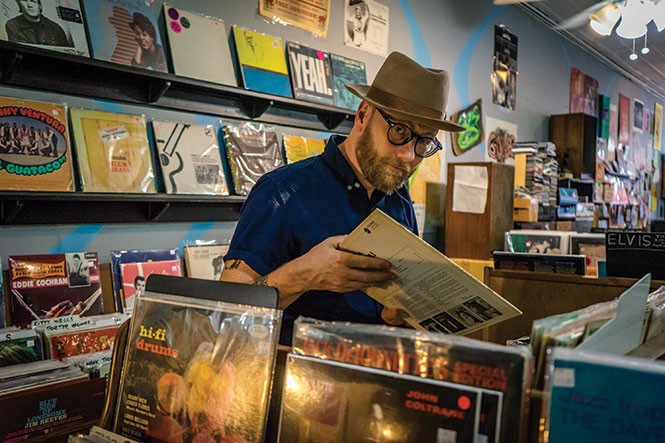 FRIDAY 2.10
Mike Doughty, Wheatus
You'd figure Mike Doughty could rest on his laurels by now. After all, he'd made his mark with the jazzy alt-rock band Soul Coughing before launching a successful solo career. Yet, some 18 albums later—after battling drug dependency and rejection by his record company—he still challenges himself in ways that suggest he's not one to follow a formula. His latest album, The Heart Watches While the Brain Burns, finds him capturing an unlikely mix of heartworn emotions and a steady groove, the result of a self-imposed regimen that dictated one new song a week. In 2015, he accomplished a feat that would make even the most ambitious auteur's head spin—a rock opera called Revelation based on the final book of the Bible and its apocalyptic predictions. Opener Wheatus, best known for their signature standard "Teenage Dirtbag," jumpstarts the proceedings with their own take on upstart attitude. (Lee Zimmerman) The State Room, 638 S. State, 8 p.m., $24, 21+, thestateroomslc.com

Run the Jewels, The Gaslamp Killer, Gangsta Boo, Nick Hook, Cuz
As part of their Run the World Tour, Killer Mike and El-P are coming to town to spit fire and dope. Hot off the release of their third album Run the Jewels 3 (Run the Jewels, Inc.), the lyrically spellbinding rap duo has been riding a well-deserved wave of critical and popular acclaim. It's no surprise—there's something crucial, relevant and empowering about the rhymes on RTJ3. Rappers like these two have always stepped up and called society out on its bullshit and, man, there is a lot of that lately. While I doubt anyone in need of a swift, political kick to the jewels is going to this particular show, here's hoping that RTJ's bass-heavy battle hymns inspire those present to take some power back. There's an afterparty at the Metro with The Gaslamp Killer and Trackstar the DJ (info at metromusichall.com). (Alex Springer) The Complex, 536 W. 100 South, 7 p.m., $26 in advance, $30 day of show, thecomplexslc.com

FRIDAY 2.10
Steve'n'Seagulls, Folk Hogan
It's remarkable how little effort it takes to re-contextualize arena rock as hillbilly music. It's as easy as playing the same music on different instruments and maybe adding embellishments like, I dunno, an anvil as percussion. That's what this Finnish quintet, which takes its name from a has-been action movie star and Utah's state bird (which tends to drop just as many bombs as Steven Seagal), tends to do on their covers of AC/DC's "Thunderstruck" and Metallica's "Seek and Destroy." They do, however, flex their interpretive muscles on Pantera's "Cemetery Gates"—reframed as a polka—and the Beastie Boys' "Sabotage," to which they give a Cajun-esque makeover. It's a welcome and interesting and much-needed spin on the played-out bluegrass-of-popular-music shtick. (RH) The Urban Lounge, 241 S. 500 East, 8 p.m., $13 presale, $15 day of show, 21+, theurbanloungeslc.com

FRIDAY 2.10
Color Me Badd
If you thought seeing former arena bands in a club like Liquid Joe's was odd, imagine how a boy band will read on that stage. Color Me Badd—formerly a foursome, now down a member—once played the big venues, too, usually to younger audiences of slobbery little girls. Now it's gonna be drunken big girls, dusting off old crushes and sensing that, through the fickleness of American pop culture attention spans, that they're within arm's reach of requital, while thrilling to CMB's pickup-line fueled hits "I Wanna Sex You Up," "All 4 Love" and "I Adore Mi Amor." Somebody's gettin' sexed up tonight, fo' sho'. (Randy Harward) Liquid Joe's, 1249 E. 3300 South, 7 p.m., $20 presale, $25 day of show, 21+, liquidjoes.net

SATURDAY 2.11
The Nile Project
Some events are more than mere musical performances; The Nile Project is an educational experience, sociological sojourn and demonstration of diversity delivered in joyous refrains from harps, lyres and voices. Despite being known as the cradle of civilization, the Nile delta region is immersed in issues over how to distribute scarce water resources. The Nile Project is composed of musicians from all 11 countries along the river who make music in more than 10 languages, in an attempt to educate audiences about these issues in their region, and their relevance to issues in our own locale. Jinja (nileproject.org), their latest release, is their liveliest yet. In a political climate that appears to be clamping down on those from beyond our borders, the Nile Project is refreshing. (BS) Kingsbury Hall, 1395 E. Presidents Circle, 7:30 p.m., $5-$20, kingsburyhall.utah.edu

TUESDAY 2.14
The Bookends, Meander Cat—Valentine's Day Show
The Bookends own "bookends" are vocalist/keys/guitarist Rick Gerber of Badfeather and singer/songwriter/instrumentalist Gillian Chase of Le Voir. It should be an interesting confluence: Gerber coming from a larger ensemble, mixing classic rock stylings, blues and soul with Chase's unique brand of indie electronica. They have shed that stylistic garb for the guise of an acoustic folk duo, and it's a dynamic one, with both of them possessing strong voices and lyrical pens. Meander Cat is another duo in the same mode, comprised of Lenore McDonough, Jasper Groff and occasionally David Mealey of Stonefed playing acoustic with a tinge of funk. After spending much of the winter in Moab, they've meandered northward, and it's to our good fortune. (BS) The Hog Wallow, 3200 E. Big Cottonwood Canyon Road, 9 p.m., $7, 21+, thehogwallow.com

WEDNESDAY 2.15
Zigga, Shanghaii, V.O. Sensei
I once had the opportunity to peruse Zigga's (born Zane Dennison) electronic library of music, so I know that anyone attending one of his shows is in for an evening of diversely influenced, locally sourced hip-hop. As a California native who saw the value in Utah's mushrooming hip-hop scene, Zigga is a bit of a rap pioneer to other members of our local hip-hop community. Shanghaii and V.O. Sensei are a few rising stars within said community, and both of them join Zigga for SLUG Magazine's monthly Localized show. For those who don't think that Utah has the hip-hop cred to compete on a national scene, get ready to have your mind changed. (AS) The Urban Lounge, 241 S. 500 East, 8 p.m., free, 21+, theurbanloungeslc.com