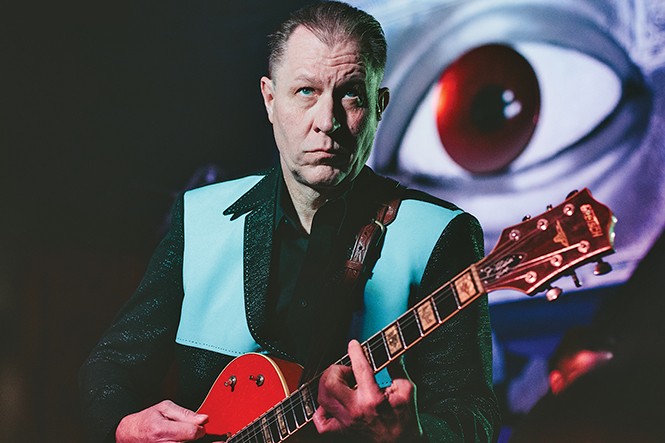 FRIDAY 2/2
Reverend Horton Heat, Voodoo Glow Skulls, Igor and the Red Elvises
Since 1985, musical spiritual leader Jim Heath has been evangelizing pretty much without rest. Better known as Reverend Horton Heat, his proselytizing efforts have helped establish the psychobilly contingent of rockabilly music as a rock-solid musical sect, with no shortage of adherents in these parts. His moniker is an homage to early country/rockabilly singer Johnny Horton, and this style of music is a sartorial as well as a throwback to '50s greaser/hot rod culture. The Reverend was an early denizen of the Sub Pop label, which even then was about much more than grunge. Later, he catapulted to major Interscope, then came to indie Yep Roc and, for his most recent release, REV (2014), Victory Records. The new set is a revitalization of his amped-up Americana sound, celebrating or warning against carnal pleasures in "Smell of Gasoline" and "Let Me Teach You How to Eat." His accomplices for the Salt Lake date include the Mexican punk band Voodoo Glowskulls and the Russian surf-rock gods Igor and the Red Elvises (formerly just The Red Elvises), which is quite a treat if you're into obscure music and films: The band was famously cast in the 1998 cult flick Six-String Samurai, among other films and TV shows. (Brian Staker) The Depot, 400 W. South Temple, 8 p.m., $20 presale; $25 day of show, 21+, depotslc.com 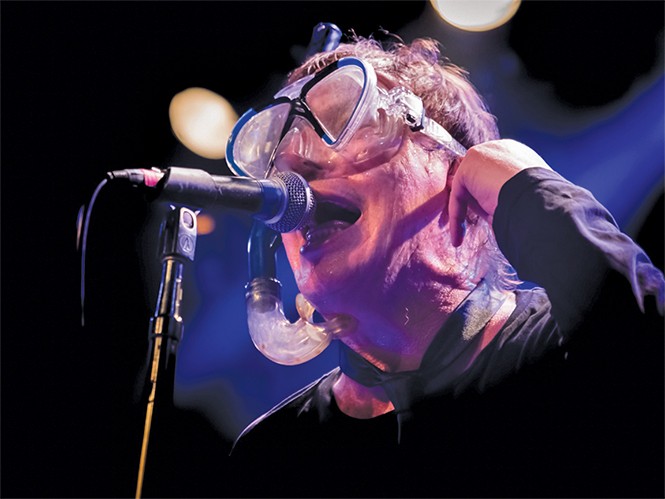 FRIDAY-SATURDAY 2/2-3
MusicCon SLC feat. Quiet Riot, Billy Dean, The Dickies, Bow Wow Wow and more
Well, the Salt Lake Comic Convention and Fan Fest were such a success, why not stage a music con? Initially intended to debut last November, MusicCon was postponed until February. Organizers used the time to bolster the lineup, adding workshops ("breakout sessions") by Desi Rexx and Jonni Lightfoot of '80s glam legends D'Molls, Neon Trees drummer Elaine Bradley and local songwriter's songwriter Monty Powell of Troubadour 77. So now we've got that plus more '80s glam from Quiet Riot—fronted by a babyfaced American Idol finalist in a backward baseball cap—and Autograph (without their original singer). Plus some pop from the same decade with Bow Wow Wow (also without their original singer). Punk rock is repped well (but only) by The Dickies, country is present with Billy Dean and James Otto, Southern-fried nü-metal is personified by Saving Abel, while former members of Train and Sugar Ray playing their old bands' pop-rock hits along with originals. Plus, legendary guitarist Jeff "Skunk" Baxter (Steely Dan, Doobie Brothers, U.S. Department of Defense missile consultant) will be there—and that mofo is the bomb. (Randy Harward) Salt Palace Convention Center, 100 S. West Temple, 10 a.m.–midnight, $7.50-$150 (concerts ticketed separately), musicconslc.com 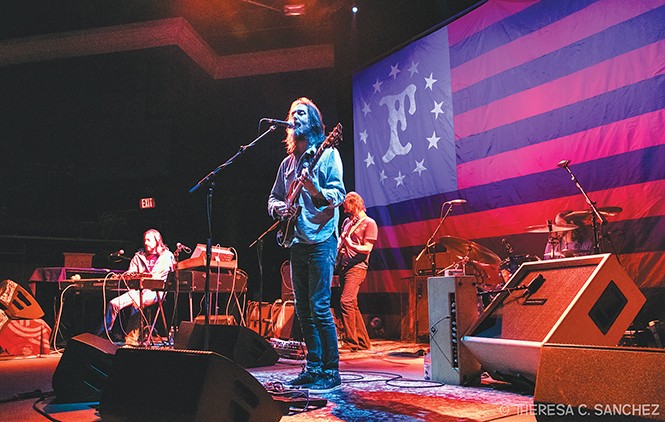 An Evening with Chris Robinson Brotherhood
Arising in the early '90s, The Black Crowes should've sunk under the weight of its own probable kitsch factor: the revival of a '70s hard rock/blues-influenced sound built by bands like Led Zeppelin, shamelessly bastardizing the bluesy source material. Well, hokey or not, depending on your opinion, Zep's British mysticism added another dimension to their musical conjurings, and Chris Robinson and co.'s musical integrity was enough that Jimmy Page jammed with them on their 2000 Live at the Greek release without embarrassing anyone. Robinson's new unit, Chris Robinson Brotherhood, was founded when The Black Crowes were on hiatus in 2011. The title of their fifth entry, Barefoot in the Head (Silver Arrow), sounds like a description of their more hippie-type followers, but it's grounded in the solid elements of their sound even as it builds on that base with a little funk and psych meditations. Lest anyone think he's abandoned the Crowes' nest for good, Robinson's new—and purportedly ephemeral—band As the Crow Flies, touring this spring, features members of The Black Crowes and CRB, and they will perform Black Crowes favorites. (Brian Staker) The State Room, 638 S. State, 9 p.m., sold out, 21+, thestateroomslc.com 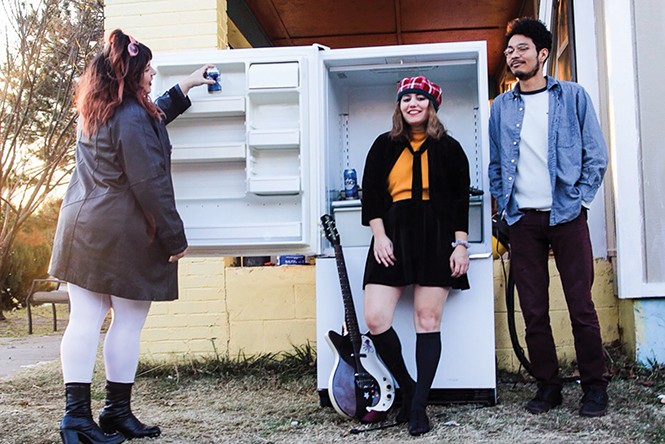 SATURDAY 2/3
Planet What, Viet Rahm, The Poppees
You gotta love surf rock from a landlocked state. That's not a dig. You don't have to live near the beach to be able to make that sweet, reverb-y racket that makes even the most mundane tasks seem cool. Even better, Planet What (great name) is fronted by two axe-slingin' women—Kylie Slabby and Jeanette Derubeis—whose keen sense of humor is all over their Facebook page, which says their interests are "wine 'n' weed" and describes their sound as "girl-fronted whatever surf rock 'n' roll in a trash can." What's more, the litany of influences is heavy on estrogen—Nirvana, Bikini Kill, Mika Miko, Hole, Babes in Toyland, The Delmonas, Sonic Youth, Bleached, Cherry Glazerr, Vivian Girls. Those influences aren't just talk; they're all over Planet What's debut EP Agnus Yarn (planetwhat.bandcamp.com). Along with the discographies of all the above-mentioned bands, it's a reminder that women can rock like nobody's business. Chicago's Viet Rahm name-checks Chi-town's super-scary mayor, and they call their music "psychedelic surf thrash" or "psychedelic dirt punk from our mind trash." Local openers The Poppees aren't the early-70s power-pop band, and their Facebook page says precious little about them—not a single adjective—but we hear good things. (RH) Diabolical Records, 238 S. Edison St., 8 p.m., $5 donation, all ages, facebook.com/diabolicalslc 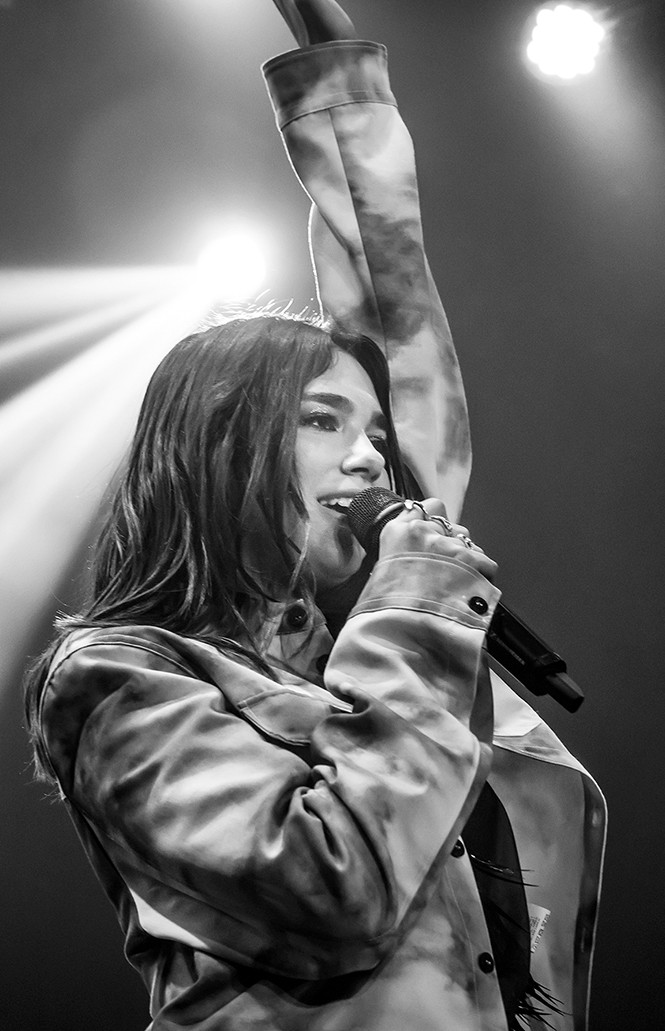 TUESDAY 2/6
Dua Lipa, Tommy Genesis
In this age of fractured media viewership, it's quite possible for all-out cultural phenomena to pass unnoticed by a huge segment of the population. Which explains why an alt-pop star like 22-year-old Dua Lipa can put up ridiculous numbers on YouTube (40 million views for a single like "IDGAF") and Spotify (which has her track "New Rules" clocking in at 690 million streams) without being a household name. Not yet, anyway. For the cynical and indie-oriented among us, it would be easy to disregard the London-based, Swedish-born singer-songwriter/glamor model as an Ariana Grande cutout (really easy, what with recent MTV.com headlines such as "Why Were Ariana Grande and Dua Lipa Hanging Out? 5 Possible Scenarios.") But give the girl a chance: Her self-titled debut studio album (Warner Bros., 2017) showcases a throaty singing voice that sets her apart from her peers, and she appears willing to take some creative risks despite the major-label backing. Anyway, you might as well give her a shot, because 730 million teenagers can't be wrong. Rapper Tommy Genesis opens. (Howard Hardee) The Depot, 400 W. South Temple, 8 p.m., $25, all ages, depotslc.com