FRIDAY 2/16
Cake
One payday evening in 1994, the new-release wall at CD Warehouse in Taylorsville didn't offer a helluva lot. In fact, it was mostly off-label releases by glam/hair metal bands grasping for continued commercial viability with darker, heavier material in a bid to compete with the major-label grunge (which was darker, heavier and hairier), budding alternative/indie rock acts and gangsta rap. A friend pointed out Cake's Motorcade of Generosity. It was on Capricorn Records, a label known for jam bands, but the simple retro cover art didn't match the sound. It could've been space lounge, ska, jazz, straight-up alt-rock—maybe power pop. As we know now, almost exactly 24 years to the day of Motorcade's release, and after five more albums, Cake is all that and more: world music, mariachi music, country, folk, funk—all informed by the sardonic, silly humor and imagery of main man John McCrea. And although they haven't put out new music since 2011's Showroom of Compassion (Upbeat), they've continued to tour and perform at festivals to a die-hard fan base that—perhaps all on the same night in 1994—were craving something really different, and finding it in Cake. (Randy Harward) Eccles Theater, 131 S. Main, 8 p.m., $25-$55, all ages, live-at-the-eccles.com

SATURDAY 2/17
LP, Noah Kahan
The LA-based singer-songwriter known as LP (real name Laura Pergolizzi) spent years working in the background of Top 40 before making her own name—and when you hear her sing, you'll probably wonder how she wasn't discovered sooner. On LP's 2016 single "Lost on You"—which is about the disintegration of her relationship with her ex-girlfriend—her voice transforms from a nasally mumble to a hair-raising wail, showcasing powerful pipes and distinctive vibrato. The song first caught fire in Greece and became a surprise international hit, but Pergolizzi was no overnight success. She spent the previous decade writing songs for marquee singers, from Cher to Rihanna, including the latter's "Cheers (Drink to That)." Now she's a pretty big deal herself, and deservedly so. Opening the show is Noah Kahan, an up-and-coming singer-songwriter out of Vermont with a distinctive singing voice of his own (see his debut EP Hurt Somebody). His highly produced folk-pop tunes display an impressive vocal range and personal, heartfelt lyrics. The single "Hurt Somebody," for instance, is about the paralyzing fear of not being able to end a relationship. (Howard Hardee) Metro Music Hall, 615 W. 100 South, 8:30 p.m., $20-$22, 21+, metromusichall.com

Radio Moscow, Amplified Heat, Green River Blues
Every town has at least one story, and Story City, Iowa, gives us the saga of psych-rock trio Radio Moscow. Over five releases since their birth in 2003, the band has evolved through acid- and stoner-rock variants at times, overall producing something reminiscent of classic '60s/'70s bands like Blue Cheer and Moby Grape, updating their sound for the amped-up and sped-up 21st century. The lineup has fluctuated a bit, but centers on the commanding vocals and fuzzed-out Strat artistry of Parker Griggs. Their latest, New Beginnings (Century Media, 2017) adds even more blues to the mix. Amplified Heat is also a three-piece, made up of the Ortiz brothers—Jim, Gian and Chris—out of musical hotbed Austin, Texas. So they're tight in the musical as well as familial sense. Formerly on Gonzolandia Records, they showcase a sense of balls-out gonzo á la (pre-political spew) Ted Nugent, and a Southwestern hard blues rock flair not too far from early ZZ Top. Locals Green River Blues open. (Brian Staker) The State Room, 638 S. State, 9 p.m., $20, 21+, thestateroomslc.com

MONDAY 2/19
Walk the Moon, Company of Thieves
Ubiquitous, bandwagon-esque dance rock is so near its saturation point that even Disney puppy mill "artists" like Joe Jonas feel like it's a safe bet for career revitalization. But some of it is great. A couple of years ago, a certain somebody (wife) insisted that I watch the video for Walk the Moon's "Shut Up and Dance With Me." The Ohio quartet's mega-hit got me to listen to the rest of Talking Is Hard (RCA, 2014). I didn't wanna dig it, but I did; I do. Almost every song is a winner. And, taken as a whole, Talking is a 1980s summer, bottled and corked and released into the 21st century. Those of us who grew up back then know those were the best summers. They were sunny and fun and positive and ripe with possibilities. We also know that seasons end, and things change. WTM's new and somewhat disjointed 2017 album What If Nothing comes after singer Nicholas Petricca watched his father succumb to Alzheimer's, and broke up with the woman who inspired "Shut Up and Dance" before undertaking the daunting task of questioning his sexuality. So change was inevitable. Also, following up lightning in a bottle isn't easy. But while What If isn't as immediately engaging as Talking or their self-titled 2011 debut, it's still more inspired and substantial than other high-charting contemporary pop rock. And with three years and so much drama between albums, they could easily have broken up, leaving us with nothing but the dreck. (Randy Harward) The Complex, 536 W. 100 South, 7 p.m., $35 presale; $37 day of show, all ages, thecomplexslc.com

TUESDAY 2/20
Tuesday Night Bluegrass Jam hosted by Pixie and the Partygrass Boys
Blues and jazz jam nights abound, as though these styles of music have a monopoly on the concept. Not that every genre is suited to the open-play format. I mean, what good could come from double Y-chromosome nü-metal/post-grunge seshes? Bluegrass, though? It might be the domain of acoustic instrumentation, but it has as many ace players as blues and jazz, and is just as suited to improvisation. And how many 'grass jams do you see? Not many. So a night like this is something different for fans and musicians alike. Hosted by local outfit Pixie and the Partygrass Boys, the new monthly event offers new sounds to the former and a new stage to the latter, which is an exciting prospect. Come out and support it so it sticks around and we can enjoy downtown hoedowns on Gracie's patio in the summer. (RH) Gracie's, 326 S. West Temple, 7-10 p.m., free, 21+, graciesslc.com 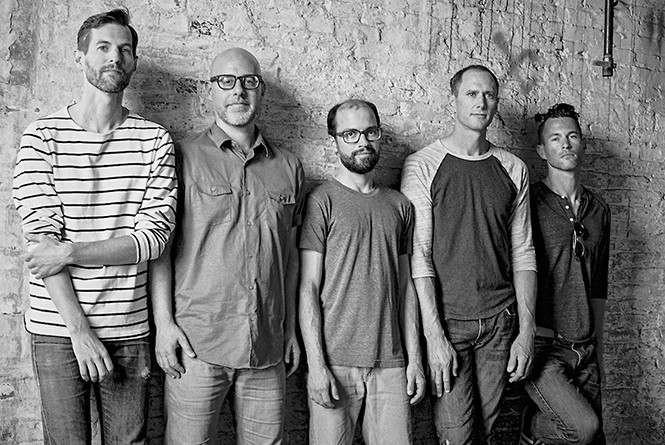 WEDNESDAY 2/21
Lotus, Marvel Years
Whoever said jam bands have to play folk instruments, anyway? Apparently Lotus wasn't listening. The long-running Philadelphia-based electronic instrumental band tends to extend songs past the 10-minute mark during their live shows, noodling around improvisationally a la Grateful Dead or Phish—except with electronic beats and lots of synthesizers. They incorporate elements of rock, electronica, jazz, jam, hip-hop and funk, and like to get weird and experimental at most every turn, but always fall back into a hula-hoop friendly groove, sometimes even working dubstep drops into their live sets. And speaking of genre mash-ups, Lotus is supported by glitch-hop/electro-soul producer Marvel Years, a guitar prodigy and beatmaker who blends classic-rock licks with modern EDM beats for an interesting (and danceable) hybrid. In addition to his shred-happy guitar technique, he's known for remixing FM radio standards such as Crosby, Stills, Nash and Young's "Ohio" as well as The Rolling Stones' "Gimme Shelter." (HH) The Depot, 400 W. South Temple, 9 p.m., $20 presale; $23 day of show, 21+, depotslc.com