THURSDAY 1.12
Nahko and Medicine for the People
Nahko and Medicine for the People take both their music and their muse seriously. In these troubled and divisive times, they've made it their mission to bring optimism, peace and positivity to the group of followers they call their Tribe. Taking their philosophy from Native American traditions and a steadfast devotion to Mother Nature, and their music from just as many sources—world, jam, rock, blues—they're intent on providing an impetus for change. The band's latest album is called Hoka (SideOneDummy, 2016), derived from a Native American phrase. "With your trust and support, we humbly accept this role and speak our prayers of intention to take direct action," the group proclaims on their website. "'Hoka Hey' means, 'today is a good day to die,' but perhaps with your help, it could transform into a better day to live." OK, we're feeling it, and immersing a message in the music obviously garners appeal. It's moving, modern, intelligent and fueled by emotion and empowerment. And yeah, it hits a good groove as well. This Medicine goes down real easy. (Lee Zimmerman) The Depot, 400 W. South Temple, 7:30 p.m., $25 in advance, $28 day of show, depotslc.com

Chicago Mike Beck
Show any appreciation of songwriters' songwriter John Hiatt, and I'm all ears. The first thing I ever heard Chicago Mike Beck play was a cover of Hiatt's "Through Your Hands" from Hiatt's 1990 album Stolen Moments, via Beck's 2013 Park City TV performance (YouTube). That's one of my favorite Hiatt songs, ever, and he often performs it solo, acoustic and unaccompanied (best version is on Hiatt Comes Alive at Budokan, if you're interested). Beck does likewise, for the most part, adding some effects to his guitar and a djembe player—and crushes it. Covers are a big part of Beck's repertoire, and he's an ace interpreter. But he's also got some originals—like "I'll Get There When I Get There," a jaunty blues number that he calls "my personal theme song." I know several folks, myself included, who could adopt it for their own. (Randy Harward) The Hog Wallow Pub, 3200 E. Big Cottonwood Canyon Road, 9:30 p.m., $7, 21+, thehogwallow.com

THURSDAY-SATURDAY 1.12-14
Robert Earl Keen
There are other artists who can lay claim to being a bona fide musical ambassador from the great state of Texas, but few of them can claim that birthright as assertively as Robert Earl Keen. For more than three decades, he's steadily ploughed the roots of authentic Americana, furthering a tradition shared by Townes Van Zandt, Lyle Lovett, Nanci Griffith, Joe Ely, Willie Nelson, Shawn Colvin and others who have made Lubbock, and the Texas southern hill country in particular, such a wellspring of contemporary country music. Granted, Keen might not boast as high a profile with the general populace as some of his contemporaries, but his work remains every bit as influential. With 18 albums to his credit, he's given those who have covered his songs plenty to choose from, while also inscribing his own indelible imprint as a living legend. That's cool for Keen, and the rest of us as well. (LZ) The Egyptian Theatre, 328 Main, Park City, 8 p.m., $39-$75, egyptiantheatrecompany.org

SATURDAY 1.14
Eagle Twin, Cornered by Zombies, Baby Gurl
Gentry Densley had a big year in 2016. He reunited the seminal experimental metal band Iceburn he fronted in the '90s for a concert in July, and the band started work on a new release. His current band Eagle Twin seemingly rang (or clanged) in the New Year with a show on December 30—heavy enough to reverberate across two spaces in the calendar. And, last but not least, he became a parent. ET (and almost certainly no one calls them that) is more doom/sludge metal, but also highlights Densley's ragged, rugged vocals, including Tuvan throat singing. Densley says the band is currently mixing a new album, The Thundering Heard (Songs of Hoof and Horn), due for release on Southern Lord this spring or summer. Songs include "Quanah un Rama," "Elk Wolvf Hymn," "Heavy Hoof" and "Antlers of Lightning/Hooves of Thunder." Cornered By Zombies' most recent disc, Hurry Up And Wait (self-released, 2013) finds their adherents with baited breath. Prior to their September 2015 Incompoop, noise duo Baby Gurl appeared on a split with Gaytheist, a finalist in the "local band name most likely to get you in trouble with your neighborhood religious maven" sweepstakes. All in all, this show might be an early 2017 attempt to address the question, "Why is hard, driving, metallic music always so popular in the state of the Beehive?" (Brian Staker) The Urban Lounge, 241 S. 500 East, 8 p.m., $5, 21+, theurbanloungeslc.com 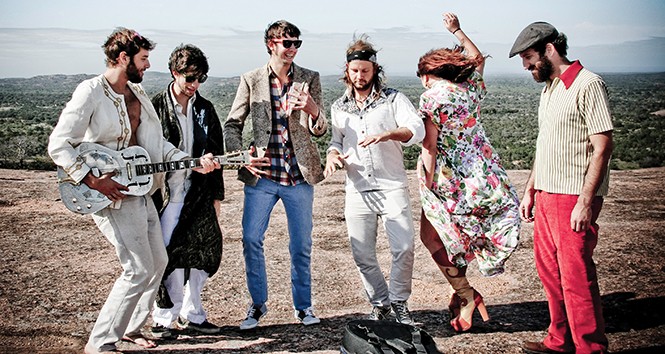 MONDAY 1.16
Calliope Musicals
What is it with Austin and big bands of super-happies in colorful hippie outfits, playin' stuff called "joy-pop?" I blame The Polyphonic Spree—a great band, but their whole sunshine 'n' Kool-Aid thing, plus drugs, inspired such a glut of these bands that it got old fast. The music is everywhere, even in commercials where it loses all of its original and intended inclusive, communal vibe. But once in a while, one of these new bands is pretty cool. Calliope Musicals makes the cut, hitting all the touchstones of the genre while also calling back to AM radio pop and even, if my ears hear correctly, a little bit of Elephant 6 pop. Listening to their album Time Owes You Nothing (2016) in the middle of January is doin' wonders from my undiagnosed seasonal affective disorder (aka winter blahs). So I'm gonna keep listenin'. (Randy Harward) Kamikaze's, 2404 Adams Ave., Ogden, 6:30 p.m., $5 in advance, $10 day of show, 21+, kamikazesogden.com

TUESDAY 1.17
The Expendables, Hirie, Tribal Theory
There are two musical genre branches that have, oddly, never had much convergence: surf rock and reggae. But Santa Cruz, Calif., outfit The Expendables have intermingled reggae with punk rock (a combo fated since the beginning, due to both styles' raging against authority) with surf-style guitar playing, even to the extent of fretboard dueling like two beach bums in search of the perfect wave, updated with contemporary guitar sonorities and effects. As yet another musical combo about to celebrate 20 years in existence, they have both groomed their fanbase and refined their musical artistry. Filipino act Hirie brings a more traditional reggae sound, and Tribal Theory out of San Diego adds some "West Coast cool" that fuses their Pacific Island culture with an urban reggae aesthetic. In the middle of January, here's a little summer up in the mountains of Park City. (BS) Park City Live, 427 Main, 7 p.m., $15-$65, 21+, parkcitylive.net

WEDNESDAY 1.18
August Burns Red, Protest the Hero
Contrary to popular belief, Wednesday—not Sunday—is the best night of the week for Christian metalcore. Look it up. There's all kinds of metrics and stuff, in addition to Bible verses that can be massaged to support that (among other things). Even if it wasn't, Pennsylvania-based quintet August Burns Red is still gonna play. The Jesus-shriekers are touring in celebration of the 10th anniversary of their 2007 album Messengers (get it?) and bringing along pottymouthed and, in this writer's humble opinion, superior (yes, because of the swears) band Protest the Hero. The Canadian progressive rock group is of the same mind as Mexican prog/screamo band Pierce the Veil: They keep it fun, they skew younger and appeal to the new (read: yuck) Warped Tour crowd, they rock hard and they have chops that belie their scene and might keep them viable when their crowd matures. In Hearts Wake and '68 January open. (RH) The Complex, 536 W. 100 South, 6 p.m., $23 in advance, $27 day of show, thecomplexslc.com