by Brian Staker and Randy Harward 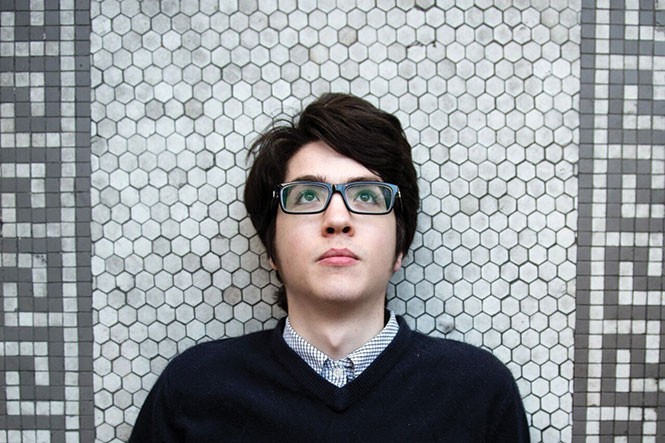 THURSDAY JAN. 14
Car Seat Headrest
Will Toledo is only 23, but he already has 12 albums of lo-fi psych rock and power pop on his Bandcamp page—more than half of it free, and the rest priced progressively from $1-$4, and a deal with Matador Records. What's even crazier is how Toledo seems to be the second coming of Guided by Voices nucleus Robert Pollard (who is from Dayton, Ohio which is near Toledo, Ohio—cosmic!), with the same ear for melodies and hyper-prolific tendencies. Toledo's Matador debut, Teens of Style, is the most expensive of his Bandcamp offerings, naturally, but when you can get all this music for only $14 total, you should do it. Then go see him tonight in teeny little Kilby Court, so you can say you did. (RH) Kilby Court, 741 S. 330 West, 7 p.m., $13 in advance, $15 day of show, KilbyCourt.com

THURSDAY JAN. 14
Herban Empire, The Tribe of I, Wasnatch
SLUG magazine has been presenting the Localized local band showcase at Urban Lounge since it seems like forever, and its first offering of 2016 aims to break through the haze of the annual climatic inversion with the musical equivalent of sunshine: reggae. It's not the first thing that comes to mind genre-wise in local music, but three local outfits fill the bill. Herban Empire is the one most purely situated in the upbeat, reverb-infused style, although they term themselves "alt-reggae." The guitar work of Andrew Cole and Adam Lenkowski comes more to the forefront to accent their vocals than the traditionally minimalist, rhythm-guitar scratches of reggae, as you might expect given their favor for bands like Slightly Stoopid, 311 and Sublime. The Tribe of I fuses reggae with hip-hop and jazz, and Wasnatch is the musical wild card of the three, with a formidable horn section that utilizes elements of reggae's stylistic predecessors—rocksteady and ska—but is always ready to veer off into whatever jazz/funk/punk detour the rhythm section might lead. And the cover of their 2013 album Front to Back gives new meaning to the word "horny." (BS) The Urban Lounge, 241 S. 500 East, 9 p.m., free, TheUrbanLoungeSLC.com

THURSDAY, FRIDAY & SATURDAY
JAN. 14-16
Mark Farner
As the main man behind '70s classic rockers Grand Funk Railroad, Mark Farner is responsible for some incredible music. Perhaps the greatest acknowledgement of this is when Farner's old band was immortalized in an episode of The Simpsons. "You kids don't know Grand Funk?," Homer asked Bart and Lisa incredulously. "The wild, shirtless lyrics of Mark Farner? The bong-rattling bass of Mel Schacher? The competent drum work of Don Brewer?" His incredulousness is justified, when you consider some of those classic songs he's given us, like the inspirational "I'm Your Captain (Closer to Home)," the joyous "Some Kind of Wonderful," and "We're an American Band," the only patriotic song that has a shout-out to a groupie. God Bless Sweet Connie Hamzy! (Randy Harward) The Egyptian Theatre, 328 Main St. (Park City), 8 p.m., $29-55, EgyptianTheatreCompany.org

SATURDAY JAN. 16
Wing & Claw
James Miska has his own way of doing things. In 2010, with his last band, Bramble, he busked on snowy Main Street in Park City during the Sundance Film Festival. In October of that same year, he toured the East Coast on a bicycle, riding 65-70 miles daily while towing his gear. Now, with his new Americana duo, Wing & Claw, Miska hosts "summertime guerilla shows in secret downtown locales." Saturday's gig, while no secret, is at a barbershop. Usually, when a band goes to ostensibly gimmicky lengths, it's a red flag. Occasionally, as with Miska, it's just a sign of creativity. A better indicator, though, would be the spare, stunning songs on W&C's eponymous debut LP, which you can hear now at WingandClaw.Bandcamp.com, and grab tonight for cheap. (RH) Stefahn's Barber Shop, 409 N. 300 West, 7 p.m., $5 (admission only), $10 (admission plus download code), $12-15 (admission plus vinyl LP and download), Facebook.com/WingAndClawMusic

SATURDAY JAN. 16
Cas Haley
Thirty-five-year old Paris, Texas, native singer/guitarist Cas Haley was the runner-up on TV show America's Got Talent during its second season in 2007. The year after that, his self-titled debut reached No. 2 on Billboard's reggae charts, and its 2010 follow-up, Connection (Easy Star), did the same, but 2013's La Si Dah did not chart. All of this is fairly run-of-the-mill in terms of musician tribulations, but after a 2014 skiing accident in which he temporarily lost his voice, his outlook on music and life was transformed. Last year, voice regained, he recorded his newest set, More Music, More Family at Steelgrass Farm in Kauai, Hawaii, crowd-funded on PledgeMusic and released last November on Jimmy Buffett's Mailboat Records. The release adds a touch of island music to Haley's sound, which always included some Texas blues and soul, and features a guest appearance from the Beach Boys' Mike Love. Also on the bill are Emily Bea, a 20-year-old Salt Lake City singer/songwriter; Layton guitarist and tunesmith Kyle Linder, and Provo indie-folk quartet Cephas. (BS) Kilby Court, 741 S. 330 West, 7 p.m., $13 in advance, $15 day of show, KilbyCourt.com

SATURDAY JAN. 16
KRCL Presents An Evening With Todd Rundgren
Everyone, at some point, has heard Todd Rundgren's 1972 hit, "Hello It's Me," because it has a way of popping up on department store overhead music. But Rundgren's no one-hitter: His curriculum vitae is lengthy and far-reaching, covering garage rock (Nazz, who originally recorded "Hello It's Me" in the late '60s), prog rock (with Utopia), power pop and new wave (when he replaced Ric Ocasek in The New Cars). He even has two more hits you might know: "I Saw the Light" (1972) and "Bang the Drum All Day" (1983), and has continued to put out critically-acclaimed solo albums—including last year's Global. This, while still forming new projects such as the highly experimental Runddans, a 39-minute song divided into 12 parts and four album sides. Expect this career-spanning show to be meaty and satisfying, with accompanying eye candy. (RH) The Depot, 400 W. South Temple, 8 p.m., $30 in advance, $34 day of show, DepotSLC.com

WEDNESDAY JAN. 20
Bat Manors
Their name sounds like a '60s cool-ghoul TV sitcom a la The Addams Family or The Munsters, but Bat Manors is one of the latest entrants in Utah County's push to rival Portland, Ore., as a center for the folk-core scene. What's folk-core? It's a genre that seems to draw a lot of disparate adherents under its tent, the common denominator being a kind of acoustic music based on elements of traditional folk, but emphatically more rough-edged; some participants even veer towards the folk-punk of bands like The Pogues. In the case of Bat Manors, their "-core" is an introspective look at the spirituality of vocalist/main songwriter Adam Klopp. The band has had a rotating cast of characters in its three-year life span, but has inched its way from noisier beginnings to a light chamber pop that is quite beguiling, and finds your ear entranced. P.S. Their website BatManors.com is like the '90s Internet came back just to give out epileptic seizures, in 256 colors. Much better is their Bandcamp page, BatManors.Bandcamp.com, where you can take a listen to their 2015 LP Literally Weird (Bleed 101 Records), whose artwork is literally that, a sight (and sound) to behold. With Strong Words, No Sun, Tess Conrie. (BS) The Urban Lounge, 241 S. 500 East, 9 p.m., free, TheUrbanLoungeSLC.com