As a hub of the Provo music scene and a continual supporter of local music, landmark venue Velour seems to get only better and better with age. And as has become an annual tradition, owner Corey Fox and crew are celebrating the anniversary of Velour's opening with a huge concert. The two-night event will feature some locals, a few Provo-born bands that have relocated to Los Angeles, and a brand-new band that's debuting tonight, so you'd better get yourself to both shows. Night 1's lineup will include nationally acclaimed indie-rock band The Moth & the Flame, who just celebrated their third anniversary in November and are currently on tour; electro/alt-rock twosome Sego, who have roots in Utah but are based in Los Angeles, and are making their first appearance in Provo tonight; and Haarlem, a band made up of members of Polytype, Parlor Hawk and Loud Harp that's performing for the first time at this show. Night 2 will feature oldies-inspired surf/indie-rock five-piece The New Electric Sound; indie-rock/electro band The Brocks; and Los Angeles indie-pop quartet Mount Saint. (Kolbie Stonehocker) Velour, 135 N. University Ave., Provo, also Jan. 17, 8:30 p.m., $10, VelourLive.com


As the founder/frontwoman of alt-bluegrass band Crooked Still and a member of Americana trio Sometymes Why, Brooklyn-based singer-songwriter Aoife (pronounced "Ee-fuh") O'Donovan has long lent her lullaby-like voice to full bands. However, since the release of her 2013 debut solo album, Fossils, O'Donovan has successfully established herself as a confident solo performer with an ear for simple but beautiful melodies and traditionally informed arrangements. And while her understated music is hauntingly lovely on its own, O'Donovan's voice takes it somewhere completely magical. Perfectly accompanied by pedal steel and rolling acoustic guitar, that voice is particularly striking on "Lay My Burden Down," and something about "Oh, Mama"—with the wistful line "When I was a sailor, you were my land"—will make you feel like everything is going to be OK. (Kolbie Stonehocker)Eccles Center for the Performing Arts, 1750 Kearns Blvd., Park City, 7:30 p.m., $20-$69, EcclesCenter.org


Though Johnny Cash died in 2003, the legend of the Man in Black lives on, in well-thumbed copies of Cash on fans' nightstands, through repeated plays on bar jukeboxes, and on Netflix, which recommends Walk the Line to just about everyone. Nothing against Joaquin Phoenix, but for a more authentic experience, you'll want to get up off the couch and head to The State Room, where tribute band Cash'd Out will be playing Cash's early, most recognizable songs at a level of authenticity that, according to Cash'd Out frontman Douglas Benson, once made Cash's daughter Cindy cry. (Rachel Piper) Saturday, Jan. 17 @ The State Room, 638 S. State, 9 p.m., $15, TheStateRoom.com; limited no-fee tickets available at CityWeeklyStore.com


Besides a lot of ampersands, this show will feature a whole lot of country and rootsy rock. Texas country/rock band Cody Canada & the Departed was formed out of the ashes of the-now defunct Oklahoma-based rock/country band Cross Canadian Ragweed, which was established in the '90s and dissolved in 2010. And not only does The Departed's ranks include two reunited ex-Ragweed rockers (former lead singer Cody Canada and bassist Jeremy Plato), but also, fans can expect to hear an old Ragweed hit or two at concerts, in addition to material from The Departed's new album, Hippie Love Punk, released earlier this month. Jason Boland & the Stragglers are on tour in support of their latest album, 2013's Dark & Dirty Mile, a collection of songs that tell down-to-earth stories about hardship and love, as well as showcase the band's Oklahoma-influenced country sound. (Kolbie Stonehocker) The State Room, 638 S. State, 8 p.m., $17, TheStateRoom.com; limited no-fee tickets available at CityWeeklyStore.com 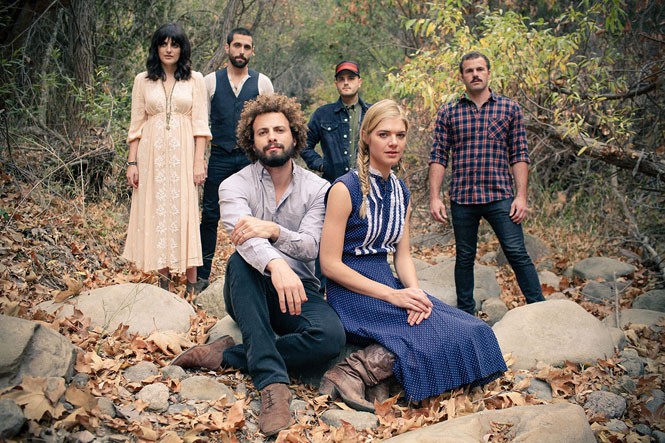 
When listening to the lush folk-rock sound of Los Angeles band Miner, it's hard to believe that they've been together since only 2013, but it's true. Made up of husband & wife Justin and Kate Miner, who are joined by Justin's brother, Jeremy, as well as a few good friends, Miner hit the ground running, wasting no time crafting music that bursts with enthusiasm and wide-eyed hope—and is infectiously catchy, to boot. As heard in the sunshiny, jangly single "Hey Love"—from Miner's debut album, Into the Morning, released in February—Miner's golden group harmonies, toe-tapping instrumentation, and whoopin' and hollerin' will put a smile on your face, as well as appeal to fans of The Kopecky Family Band and The Lumineers. Local blues-rock musician and harmonica extraordinaire Tony Holiday is also on the bill. (Kolbie Stonehocker) The Royal, 4760 S. 900 East, 8 p.m., $8 in advance, $10 day of show, TheRoyalSLC.com


There's an episode of The Office where Michael Scott suggests they make a sacrifice to a mythical creature to reverse the office's bad-luck streak (Meredith getting run down; Sprinkles dying): a monster "with the body of an egret with the head of a meerkat," he says. The music created by Massachusetts band California X seems to be made up of elements that are just as disparate, but unlike the combination of an egret and a meerkat, what California X is doing seems to work. Formed by buddies Lemmy Gurtowsky and Dan Jones, California X has a sound that, structurally and melody-wise, sounds like pop punk. But over the top they've laid a thick, gritty, scuzzed-out layer of psych-rock-esque guitar that seems to drip down into those pop-punk elements for a style that's weighty but catchy. Recently, the band's fanged music has been heard on Nights in the Dark, their sophomore album, released just a few days ago. (Kolbie Stonehocker) The Loading Dock, 445 S. 400 West, 7 p.m., $10, LoadingDockSLC.com