by Nick McGregor and Lee Zimmerman 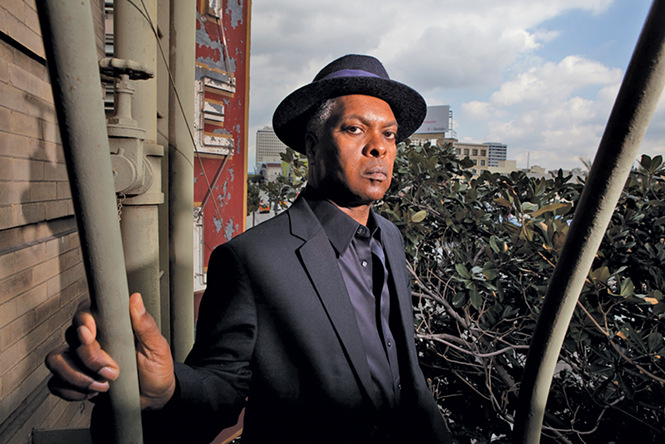 FRIDAY 1/18
Booker T. Jones, The Legendary Joe McQueen Quartet
Credit OFOAM—Ogden Friends of Acoustic Music—for serving up a superb headliner at this year's annual SnOwFOAM party. R&B legend Booker T. Jones offers every reason to kick-start the winter party season thanks to his catalog of timeless tunes. One of the originators of the Stax sound, Booker T. & The MGs made instrumental music viable at a time when great singers dominated the charts. In addition, as a multiracial band—members included keyboardist Jones, guitarist Steve Cropper, bassist Duck Dunn and drummer Al Jackson Jr.—they were among the first outfits to feature both black and white musicians of equal status within the same ensemble. The list of artists they supported onstage and in the studio reads like a who's who of American soul: Wilson Pickett, Sam & Dave, Otis Redding, Rufus Thomas, Carla Thomas and Bill Withers. But Booker T. & The MGs were more than merely a backing band. They scored several hits on their own, with "Green Onions" serving as their signature song. Locals might recall Booker T.'s outstanding performance at the Ogden Valley Roots and Blues Festival in 2015 and last year's sold-out show at The State Room. His recent induction into the Rock & Roll Hall of Fame and Grammy Lifetime Achievement Award ensure his immortality. (Lee Zimmerman) Peery's Egyptian Theater, 2415 Washington Blvd., Ogden, 7 p.m., $25 presale; $30 door; $23 students and seniors, all ages, egyptiantheaterogden.com

Wild Child, Batty Jr.
Austin, Texas, septet Wild Child lives up to its name, producing pop euphoria informed by nearly every strain of American music. But where their early work relied on a foundation of indie rock rowdiness, 2018's Expectations more clearly integrates the R&B, soul and gospel roots of frontwoman Kelsey Wilson and the ukulele skills of fellow vocalist Alexander Beggins. The single "Sinking Ship" is particularly personal, building its beat off a sample of Wilson's heartbeat and blending orchestral folk into a heartrending look at how love comes and goes—often violently and without warning. Engineered by in-demand producers like Chris Walla (Death Cab for Cutie), Chris Boosahda (Shakey Graves), Scott McMicken (Dr. Dog) and Adrian Quesada (Brownout, Black Pumas), Expectations struck a nerve with fans, racking up nearly 2 million streams in less than two months and landing single "Think It Over" on the AAA radio charts. Returning to Salt Lake City just nine months after their sold-out show at Kilby Court, Wild Child now headlines The State Room stage on Jan. 18—one day before their debut appearance on the prestigious TV show Austin City Limits finally airs. They're triumphant and tender, so don't miss Wild Child as they teeter on the edge of hard-won artistic maturity. (Nick McGregor) The State Room, 638 S. State, 9 p.m., $20, 21+, thestateroom.com 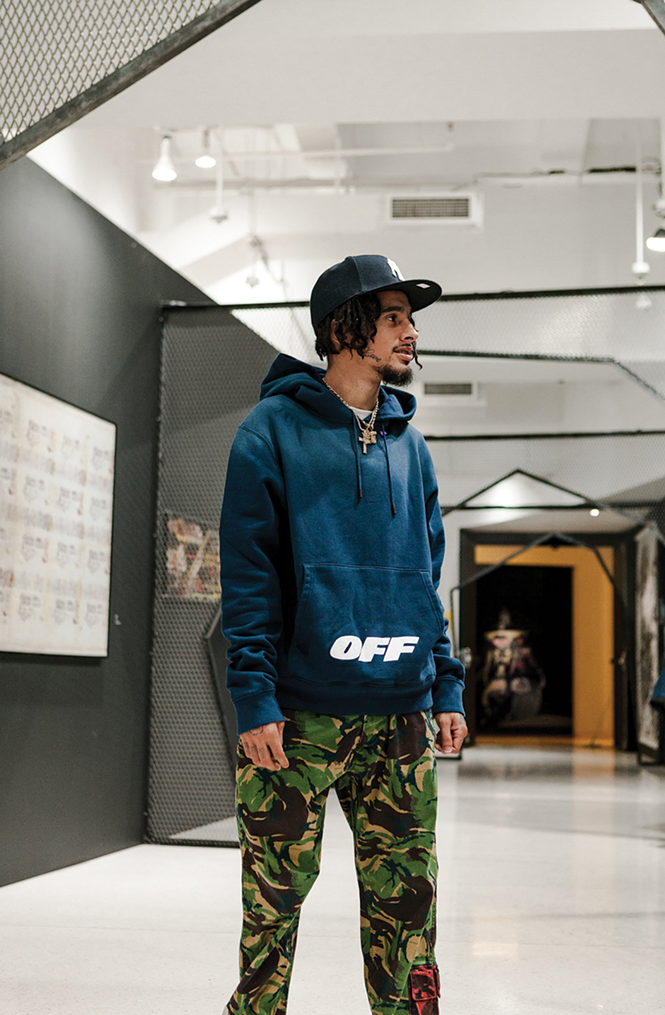 SATURDAY 1/19
Wifisfuneral, Robb Bank$
Although he's barely 21 years old, South Florida rapperWifisfuneralis far ahead of his years when it comes to his complicated lyrical flow, his desolate beats and his level of success. Breaking onto the scene with no promotion and no fanfare beyond his own social media, Wifisfuneral's first two independent albums, 2016's Black Heart Revengeand 2017'sWhen Hell Falls, sold well on the hip-hop charts, leading to a deal with legendary label Interscope Records. Two 2018 mixtapes—Boy Who Cried Wolf and Ethernet—earned Wifisfuneral a coveted spot in XXL Magazine's Freshman Class and a star turn atop YouTube's trending chart. That last metric of success reflects the zeal of Wifisfuneral's fans, who've clung to this MC longer than other flavor-of-the-minute cloud rap sensations. The young maestro's answer: Last fall's Leave Me The Fuck AloneEP,which plumbed the depths of Wifisfuneral's tormented mental state.There's plenty of zeitgeist moments—no word on whether "Alone as a Facetat" is a takedown of today's in-your-face rap look—and abrasive auto-tune, but"Pain" puts our man's rapid-fire rhymes on display: "Listen, I was lost a lot/ Trapped in hell with no parking spot/ No pot to piss, they watched me rot/ I was rottin' in my grave, I thought/ But it was back to reality, it kept me soft." Don't miss opener Robb Bank$, another fast-rising South Florida young gun with a confrontational style. (NM) The Complex, 536 W. 100 South, 7 p.m., $19.50 presale; $50 VIP meet and greet, all ages, thecomplexslc.com

TUESDAY 1/22
Dawes
Dawes has come a long way since its emergence a decade ago. At the time, pundits were all too eager to point out a certain similarity in the band's style to the sun-speckled, patchouli-patched sound of Laurel Canyon's hipper denizens that took root in the hills above Los Angeles in the late '60s and early '70s. Although Dawes outgrew those references, the band has shared a sense of intimacy ever since, further illuminated through the gentle embrace of their last two albums, We're All Gonna Die and Passwords. The band harbors no pretensions, but the rabid following they've gathered over the course of six full-lengths suggests they've attained an easily relatable niche nevertheless. "We've never been hip and fashionable," guitarist Taylor Goldsmith says. "That's allowed our relationship with our audience to be so much more genuine and authentic. The role that we play in people's lives has been purely about the music, and that makes our dance with them that much more fun and that much easier." Those fans clearly concur; despite the fact that Dawes opts for melody over mayhem, there's a communal bond that turns each concert into a celebration of pure glee. "We were lucky that people took notice," Goldsmith continues, insisting that the band eschewed any desire to become superstars. Still, give Dawes credit for succeeding by creating such a casual connection. (LZ) The Commonwealth Room, 195 W. 2100 South, 8 p.m., $32, thecommonwealthroom.ticketfly.com 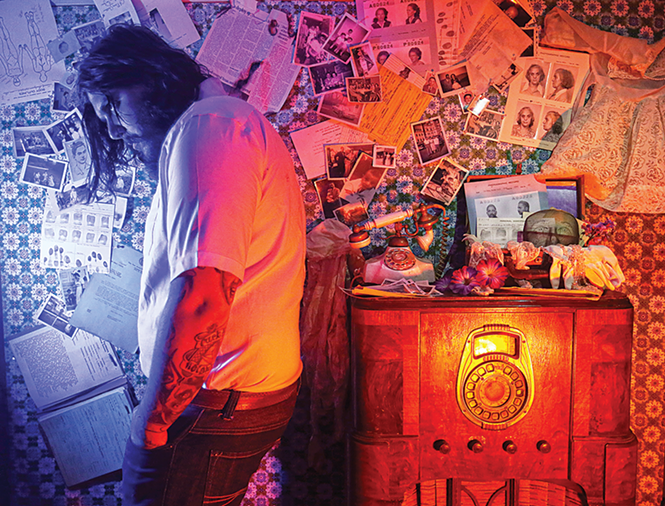 Tuesday 1/22
Amigo the Devil, Harley Poe, Folk Hogan
What the hell is "murder folk," and how seriously can we take something that's named after one of the grossest of sins? Whether or not Johnny Cash actually did shoot a man in Reno just to watch him die, the roots of the genre run back to the Man in Black. Today, Danny "Amigo the Devil" Kiranos leads the charge, incorporating key elements of gothic folk, Satan-obsessed country and bluegrass' evil cousin, murdergrass, into his stark acoustic sound. Equal parts troubadour (think Tom Waits), balladeer (think Nick Cave) and rural truth-teller (think William Elliott Whitmore), Amigo the Devil cuts his music with darkness, delivering morbid lyrics injected with the blackest sense of humor this side of Reddit. Amigo the Devil's debut album might be titledEverything Is Fine, but the irony is obvious to anyone who watches him take over a stage. Produced by metal maven Ross Robinson and featuring percussion from Rage Against the Machine's Brad Wilk, Everything Is Fine hinges on lead single "Cocaine and Abel," which builds on a finger-picked guitar line to include thrumming piano and weeping string arrangements before Amigo unleashes the hell within. "The confessions in the song [reflect] the process of personal change and hopefully growth, which is a strong theme throughout the record,"Kiranos says in a news release. "I was born impatient and I was born unkind, but I refuse to believe I have to be the same person I was born when I die." Don't miss this powerful show, upgraded to The Urban Lounge after Amigo wowed an intimate crowd next door at Rye Diner & Drinks last fall. (Nick McGregor) The Urban Lounge, 241 S. 500 East, 7 p.m., $13 presale; $15 day of show, 21+, theurbanloungeslc.com

WEDNESDAY 1/23
Michal Menert & The Pretty Fantastics
Need a musical solution to our fractured, fragmented times? California-based musician and producer Michael Menert and his band The Pretty Fantastics have just what you're looking for. On recent releaseFrom the Sea, the crosscurrents of jazz, hip-hop and electronica have never felt so synergistic, the groove-heavy tunes ebbing and flowing between chaos and clarity. Menert's love of analog equipment and fastidious studies of both Eastern and Western traditions gives his music a global sheen, with guest vocalists and backing musicians kicking things up a notch thanks to a coastal California recording process that encouraged the embrace of good vibes and the refusal of negativity. Still, this is far more than just music to groove to; considering his work "philosophical poetry," Menert says in a news release for From the Sea that, "We too often move through life on autopilot. When we stop and look back, it's all a blur. This record is an exploration of how seemingly inconsequential moments ripple through time and haunt us. I want to help people realize that they're not the only ones confused about how this is all supposed to go down. It's universal." (NM) Soundwell, 149 W. 200 South, 8 p.m., $16 presale; $21 day of show, 21+, soundwellslc.com