DJ-producer Corey Baker performed under the name Kill Paris until the extremist attacks of last November necessitated a compassionate name change to Chill Harris. The glitch maestro continues to be billed as KP while he transitions mid-tour, supporting Galaxies Between Us, which is available free at ChillHarris.com. Joining him tonight is Denver-based producer Nick Miller, aka Illenium, a new EDM contender causing something of a stir. Illenium has joined the still-growing mass of electronic dance musicians hoping to make their mark with more bass than even the biggest subwoofers can handle, blending structure with digitized sound. What Illenium has, though, which may be a veritable secret weapon of his own creation, is a grip on emotion. His upcoming debut album Ashes.To.Ashes Mix.02 is as much a pusher of the boundaries of feeling as it is of music. Any self-professed EDM "musician" can throw together a buildup and dropped beat that they're convinced will bring down the house; Illenium takes the structure of the genre a step further to almost create a story with intense builds and drops, elaborate melodic compositions, and a preternatural ability to develop an arc in sensation for the listener. Illenium is taking on what he calls "epic melodic bass music" head-on. Manic Focus also performs. (DB) Sky, 149 Pierpont Ave., 9:30 p.m., $15 and $25, SkySLC.com

Joe McQueen has bridged the history of Utah with the history of jazz music, the same way Ogden bridged the east and west of the United States with the meeting place of railroads decades earlier. Originally from Ardmore, Oklahoma, McQueen found himself in Ogden near the end of 1945. Planning to play a few gigs and move on (Ogden was a jazz hotspot because of the railroad), he ended up staying—and at the age of 96, he's a Utah jazz original. He was the first African American to perform in white-only clubs in Ogden and Salt Lake. The sax man, known for his bluesy style, has been playing for over 80 years, and has performed with jazz greats like Louis Armstrong, Count Basie, Ray Charles, Nat King Cole, Duke Ellington, Charlie Parker, Lester Young and others. In 2002, Utah Governor Mike Leavitt declared April 18 Joe McQueen Day. Two years ago he released the self-titled album The Joe McQueen Quartet, with whom he is performing at the Gallivan Center: Ryan Conger on Hammond organ, drummer Dr. Don Keipp, and Brad Wright on guitar. The concert is part of the Excellence in the Community Concert Series. (BS) The Gallivan Center, 239 S. Main, 7:30 p.m., free, ExcellenceConcerts.org

Montreal quartet Half Moon Run is all over the musical map on their latest, Sun Leads Me On (Glassnote). The first three songs hit on Beatles influences, flavor-of-the-month indie-folk and new wave/punk, respectively. The first two are repeated the most throughout the rest of the reflective baker's-dozen of songs on the album, and a Coldplay influence bubbles up in the atmosphere of the tunes, while album closer "Trust" dips into dance-rock. With so much going on, it could easily be a disjointed and confusing platter—but it works. Fellow Canadian act, the misleadingly tagged Emilie & Ogden—really an angelic-voiced girl and her harp—opens the show. (RH) The Urban Lounge, 241 S. 500 East, 9 p.m., $15 in advance, $17 day of show, TheUrbanLoungeSLC.com

This five-piece comes from the frozen tundra of Grand Rapids, Mich., but they play shiny, happy, summery music—which is exactly what some of us winter-averse Salt Lakers could use right about now. But there's more to them than tone. They call their music "Clint Eastwood drinking a piña colada at a Dick Dale concert" or "cinematic surf disco" and, on the title track of their ebullient release Full Circle (TheOuterVibe.com), they sing, "Sometimes I'm afraid my brain looks like a panty raid." Their sound is a panty raid at the sorority house of music, where everybody's their type—and no one is safe. Expect all four of their shows this week to be sublime, sunny escapes where there's something for everyone. (RH) Thursday, Jan. 21 at The Hog Wallow, 3200 E. Big Cottonwood Canyon Road, 9:30 p.m., $5, TheHogWallow.com. Friday, Saturday and Sunday at Snowbasin Resort, 3925 Snowbasin Road (Huntsville), 3:30 p.m., free, Snowbasin.com 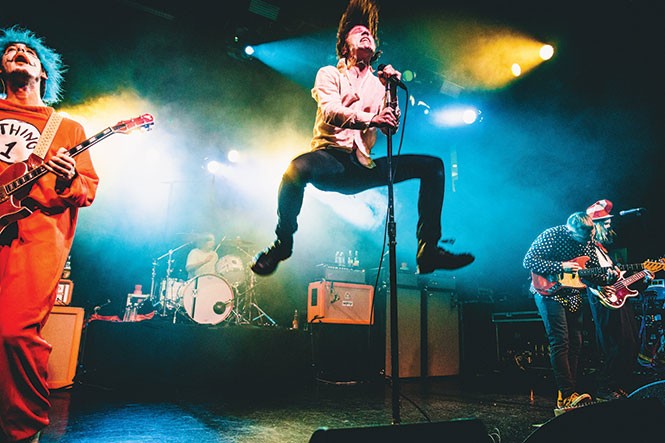 Since when did Wiz Khalifa, with his Sesame Street After Dark rhymes, become the caviar of rappers, justifying $150 tix? Eh, it's Sundance, and Park City is flush with people who wanna party—and at least have enough room on their credit cards to afford the exorbitantly priced tickets to this concert series. Now, Kentuckian quintet Cage the Elephant is a great band. All of their albums, including the newly minted Tell Me I'm Pretty (RCA) are badass, immensely satisfying tours through a litany of influences that checks the best of American and British rock 'n' roll from the last five or six decades. Haven't seen them—want to see them. They're so good, I'd almost pay the $100 they're askin' for this performance. But it's not a long-awaited reunion, nor their final tour, so I'll wait and catch them when I can see the show and get a T-shirt for the same price.
Then we've got EDM darlings The Chainsmokers, going for $100, and budding Norwegian "EDM superstar" Kygo is asking $250. Sigh. These aren't even the VIP prices, folks. At least reggae band the Dirty Heads are keepin' it real, performing for only $40. Good on 'em. (RH) Park City Live, 427 Main, see site for times, ParkCityLive.net

Jazz Jaguars is a Red Bennies side project in which current and ex-Bennies perform lounge-ified versions of songs by the Bennies and related projects such as Coyote Hoods, Glinting Gems, Tolchock Trio and Lord British. They also toss in David Bowie and Scott Walker covers. Head over to Rest30Records.Bandcamp.com and get a free download of the hefty, 86-track live album Twilite for a taste of what they're all about. Then head over to the Twi tonight for the weekly lounge music night hosted by Jazz Jaguars and featuring special guests from other local bands. (RH) Twilite Lounge, 347 E. 200 South, 9 p.m., free, TwiliteLounge.com

For the last 18 years, Atlanta livetronica outfit STS9 (short for Sound Tribe Sector 9) has been putting out futuristic, trance and dance-inducing sounds using all live instruments. It's called livetronica—electronic music performed on live instruments—and the adventurous, vibey sound suits the club/rave and jam scenes equally. They're also as hyper-prolific as groups in the latter category tend to be, constantly issuing new music (their own as well as that of scores of other similar bands) via their own 1320 Records label. As a result, getting into this band and their 1320 roster can become an expensive but completely worthwhile obsession—and it starts tonight. (RH) The Depot, 400 W. South Temple, 9 p.m., $25 in advance, $29 day of show, DepotSLC.com