FRIDAY 1/31
Michael Kiwanuka, Sammy Brue
It's hard enough to reap instant acclaim on your first time out. It's even harder to sustain that attention when the time comes for a follow-up. Consequently, it's a credit to British singer Michael Kiwanuka that he managed to achieve both. His debut album, Home Again, struck gold immediately on release, climbing into the U.K. Top 5; his sophomore set, 2016's Love & Hate, hit No. 1. Songs from the two albums were culled for use in various film and television soundtracks, and subsequently resulted in several prestigious award nominations, including a nod as the Critics' Choice from the Brit Awards, two mentions for the Mercury Prize and Q Awards honors as Best Solo Artist. The accolades continued unabated, and his latest effort, Kiwanuka, confirmed the fact that its namesake was indeed an artist with the depth and determination to make more than a passing impression. While his sound harkens back to the seminal soul music of the '60s and '70s, his atmospheric approach and personal appeal attest to the fact that he's nothing less than a mesmerizing presence and performer. It's easy to understand how he made such an immediate impression, and how, in an era where there seems to be such a stark racial, cultural and political divide, his signature song "Love & Hate" cuts across the divide that separates people at odds. Consider Kiwanuka a star for all seasons. (Lee Zimmerman) The Depot, 13 N. 400 West, 7 p.m., $76.20, 21+, depotslc.com

Telefon Tel Aviv, Steve Hauschildt
What initially attracted me to this show were the words "Ghostly International" next to the performers' names, which is the fantastic label both are on. Curators of electronic and experimental anything—from synthy club pop like Kllo, to downcast and minimal post-punkers like HTRK, to reissues of the music of Arthur Russell—Ghostly deals in anything as long as it's a little haunting. And that includes Telefon Tel Aviv. Formed in 1999 between New Orleans-based Charles Cooper and Joshua Eustis, Telefon Tel Aviv was right on the scene of turn-of-the-millennium electronic music, hitting it on the nose with their minimal, glitchy and ephemeral tracks, which found popularity upon album releases like 2001's Farenheit Fair Enough and 2004's Map of What Is Effortless. One of their most well-received records, 2009's Immolate Yourself, takes a decidedly more pop-oriented, and thus trackable, turn, but the success was accompanied by tragedy when Cooper died between German and U.S. release dates. Eustis continued with the project, though, releasing tracks here and there while extending his talents into projects involving Nine Inch Nails, Puscifer, Tropic of Cancer and Vatican Shadow. He's returned in full force, though, with 2019's decade-in-waiting album Dreams Are Not Enough, a beautiful and delicate take Telefon Tel Aviv's more hectic roots. Labelmate and opener Steve Hauschildt has spent his career crafting serene, glacial soundscapes on his own, and as a former member of dreamy synth group Emeralds, a distributor of music by Oneohtrix Point Never on his label Gneiss Things, and a collaborator with the likes of experimental acts like Julianna Barwick. (Erin Moore) The Block SLC, 625 S. 600 West, 10 p.m., $15 presale; $20 day of show, 21+, theblockslc.com 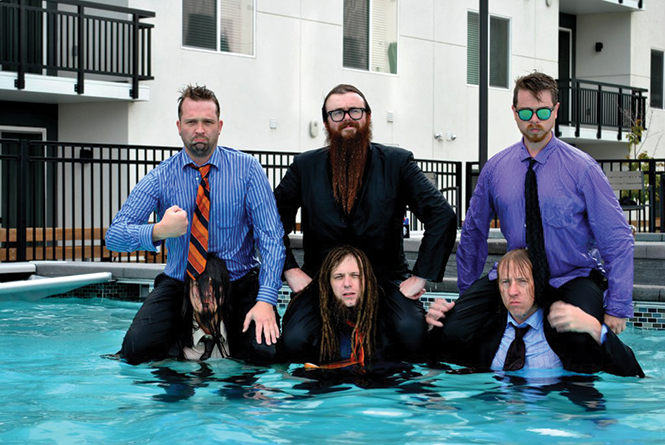 SATURDAY 2/1
Folk Hogan, No Show Cadillac
On Folk Hogan's Facebook page, the band's biography promises the band will "keep a crowd dancing while wishing they had a backup liver." It's a bold claim, but one the SLC-born sextet has proven time and time again to have no trouble backing up. The band's 2012 debut album Band of Mighty Souls feels like it was written to be the perfect soundtrack to a night of raucous, booze-soaked partying, with song titles like "March of the Drunkards," "Bootleggers Dance," "Long Walk Home" and, of course, "I'm Still Drunk." Hell, Folk Hogan's music pairs perfectly with your drink of choice even when frontman and accordionist Canyon Elliot isn't hollering about whiskey and beer, as on the band's 2015 album The Show, a concept album about the members of a traveling circus. Their singular fusion of nitty-gritty folk punk and larger-than-life hard rock has made the band a sought-after live act across Utah and even beyond, touring across the country and throughout Europe over the past several years and building a reputation for rowdy, energetic performances in the process. This Saturday, Folk Hogan hits the stage at Ogden's Funk 'n Dive Bar to do what they do best—play fast and drink whiskey. Wisconsin act No Show Cadillac opens with their particular brand of surprisingly heartwarming folk music. Although on the event page for this night of "Folk 'n' Dive" they're described—I suspect by themselves—as "just another run of the mill whiskey drinkin' shithouse folk act," their music carries something a little more striking, a little more urgent and a little more honest, prompting one to at least disbelieve the "shit" part. (Nic Renshaw) Funk 'n Dive Bar, 2550 Washington Blvd., 9 p.m., 21+, funkanddive.com

Sunday 2/2
Stop Karen, Rebel Rebel, Fists in the Wind
In the words of Stop Karen, "Stop Karen is Zooey Deschanel's chubby redneck cousin six beers into a house party." Not any sort of typical folk/indie/punk quartet, their fast-paced and uplifting sound is mixed with realistically and relatably angst-ridden lyrics that make the perfect recipe for adult lullabies—the kind we all secretly wish would be sung to us at night. On Feb. 2, Stop Karen releases the album It's Probably Fine after evolving from a much different sound apparent on their first releases, 2017's Neither Here Nor There and Bad Southerner / Coke and Cola, each collections of tinny little bedroom songs reliant on a lot of ukulele. Their new album likely follows in the vein of their 2019 single "My Stupid Mouth," where drums are ultra-present and the still-DIY delivery is all-around punchier. Live, frontwoman Katie McEntire makes the audience swoon while the rest of the band—drummer Kat Kellermeyer, bassist Brennan Waters and guitarist and fellow vocalist Molly Porter—push the energy that so desperately wants to explode. Support for this album release is found in fellow locals of the garage-leaning set, including the hustling and bustling Rebel Rebel, who specialize in no-nonsense indie rock that moves between tender melody and plain-faced angst. Fellow locals Fists in the Wind plays alongside local drag performances. (Kenzie Waldon) Urban Lounge, 241 S. 500 East, 8 p.m., $5, 21+, theurbanloungeslc.com

WEDNESDAY 2/5
HorrorPops, The Quakes, Franks & Deans
After keeping quiet for nearly a decade, Copenhagen's HorrorPops are back. Since rebuilding their social media presence in late summer 2019, HorrorPops have been dropping hints on multiple platforms that they were coming back. While it was unclear at first—as they were sharing mostly old promo photos and logos—it wasn't long until the brand new promos dropped in October, revealing that they were working on the "Valentines Exclusive Extravaganza" tour. Their return, while long-awaited and long overdue, is incredibly sweet and exciting. Having woven themselves into the fabric that makes up psychobilly as a genre, the HorrorPops do it like no one else can. Patricia Day's vocals are raspy and distinguished against the bouncy, punky instrumentals that support them and every track in their discography is fun, no matter the message it carries. Their style is bold, unique and in-your-face while still maintaining their signature, retro charm as demonstrated in their three studio-albums: Bring it On!, Hell Yeah! and Kiss Kiss Kill Kill. I never thought I'd have another chance to see them perform. The last time they were in Utah was in 2010 when they played the Avalon Theater (RIP). However, we get another unexpected chance. It will be a killer night, no doubt. (Zaina Abujebarah) Metro Music Hall, 615 W. 100 South, 8 p.m., $27, 21+, metromusichall.com