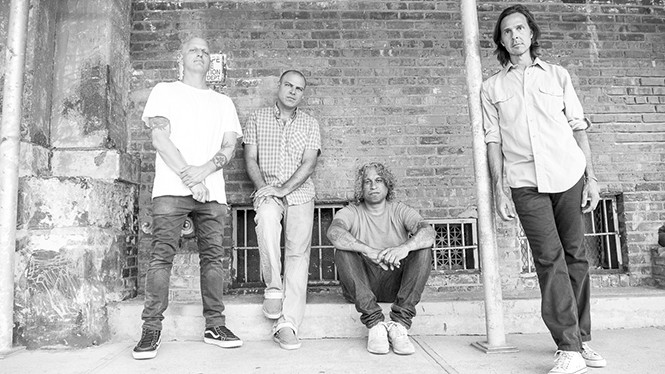 THURSDAY 7/12
Quicksand, Glassjaw, Spotlights
Even though the early 1990s was a golden era for hardcore, it was born from the angry, passion-filled generation that made up the New York scene in the '80s. The Empire State's thriving underground brought us legendary hardcore bands like Agnostic Front, Gorilla Biscuits and way too many more to name. Thirty years later, many of those bands remind us that hardcore never went anywhere—it just evolved. In 1993, NYC quartet Quicksand, which included Walter Schreifels of Gorilla Biscuits and Youth of Today, released their first studio album, Slip, creating what we know now as post-hardcore. Around the same time, Glassjaw came out swinging from Hempstead on Long Island. The band dropped their first EP, Kiss, Kiss Bang Bang, in 1997. Although they took an early two-year hiatus, their lowercase g/j mash-up symbol has become something of an icon in the hardcore world. Despite Glassjaw's ever-changing lineup, Daryl Palumbo and Justin Beck have stayed the course, keeping their music grounded and pure. Both Glassjaw and Quicksand share a common theme: just three full-length studio albums apiece, not counting the many EPs both have released. And that's precisely what made 2017 such a notable year, with Quicksand returning on Interiors and Glassjaw delivering Material Control. With two early icons back in the game, it's safe to say this show will awaken the inner hardcore kid in all of us. (Rachelle Fernandez) The Complex, 536 W. 100 South, 6:30 p.m., $26.50 presale; $30 day of show, all ages, thecomplexslc.com

Todd Snider
Todd Snider might seem like an irascible sort, what with his somewhat gruff demeanor and decidedly insurgent attitude. It's a persona that also creates a certain air of unpredictability, as recently reflected in his strange alter ego, "Elmo Buzz," a wannabe musician and apparent archrival. Buzz is the subject of Snider's most recent LP, Eastside Bulldog, an album flush with relentless rock 'n' roll, playful parody and the latest turn in a career that's careened from dwelling on so-called "agnostic hymns and stoner fables," "peace queers" and devils to paying homage to Texas troubadour Jerry Jeff Walker. Strange stuff indeed, but there's no denying the power of Snider's songs and the satirical bent of his lyrics. The fact is, the Nashville rabble-rouser is rarely reticent when it comes to courting controversy—but he's a hoot as well. A serious storyteller (as both his albums and concerts attest) and member of the ad hoc sometimes-supergroup Hard Working Americans, he's adept at untangling even the most bizarre scenarios through imagination and invention. "My last record was written and recorded in one night for fun, as a tribute to garage rock," Snider says. "I never thought it would come out. But then my trajectory has been more like a pinball or a sock in the dryer than any kind of focused attempt at achieving something."(Lee Zimmerman) The State Room, 638 S. State, 8 p.m., sold out at press time, 21+, thestateroom.com

FRIDAY 7/13
YOB, Bell Witch, The Ditch and the Delta
Doom metal fans should consider themselves lucky that YOB is even still around. The Eugene, Ore.-based trio split in 2006, following a run of acclaimed albums that culminated in 2005's The Unreal Never Lived. Fans rejoiced when the band re-formed in 2008, and again when they released the punishing The Great Cessation a year later. YOB continued touring and releasing albums semi-regularly until early 2017, when frontman and primary songwriter Mike Scheidt was nearly killed by a chronic intestinal disease, undergoing two emergency surgeries to relieve pain Scheidt later described to Noisey as "like being plugged into the light socket of all that is—a raw nerve ending of the universe." Scheidt's brush with death, subsequent months of recovery and fresh outlook on life directly inspired YOB's new full-length, Our Raw Heart. Longtime fans needn't worry about Scheidt's new perspective resulting in a drastic shift in style, though. Our Raw Heart features all the usual YOB trademarks—crushingly heavy atmosphere; slow, driving guitar riffs; the intriguing mix of harsh and clean vocals—but infuses them with an optimistic, life-affirming tone largely absent from earlier material. YOB is hitting the road to support the album, bringing their intense, wall-of-sound live show to stages across North America. Accompanying them are fellow Oregonians Bell Witch—whose recent album Mirror Reaper appeared on best-of-2017 lists from Decibel, Loudwire and The Quietus, among others—along with local doom purveyors The Ditch and the Delta. (Nic Renshaw) The Urban Lounge, 241 S. 500 East, 8 p.m., $14 presale; $16 day of show, 21+, theurbanloungeslc.com

Grace Potter
Vermont native Grace Potter has covered a lot of ground since she started playing music in 2002 as a 19-year-old student at St. Lawrence University. Originally hailed as an early advocate of indie rock's return to roots music, Potter and her backing band The Nocturnals injected blues, soul and folk into their slick sound. But big-tent ambitions didn't sit well with the indie cognoscenti; neither did the band's un-ironic love of classic covers like The Rolling Stones' "Gimme Shelter." That sent Potter and company down a mainstream path, as 2007's This Is Somewhere and 2012's The Lion the Beast the Beat topped Billboard charts, Potter appeared on TV shows as benign as One Tree Hill and, in 2010, she earned a Grammy nomination for "You and Tequila," a duet with country heartthrob Kenny Chesney. Collaborations with The Flaming Lips and Gov't Mule, plus her creation of Burlington's Grand Point North music festival, kept Potter honest, though. And her 2013 divorce from longtime Nocturnals bandmate Matt Burr and subsequent two-year break yielded 2015's powerful solo exercise Midnight, along with "Wild Child," another country hit with Chesney. After welcoming her first child with new fiancé Eric Valentine in January, Potter has readjusted her touring to include more meaningful stops: a show with the National Symphony Orchestra Pops at the Kennedy Center in June to celebrate NASA's 60th anniversary, the 8th Annual Grand Point North in September with Jackson Browne and, yes, Park City. "Grace is positively captivating onstage," Park City Institute Executive Director Teri Orr says. "We're thrilled to have her back—especially since we're one of just a handful of dates she's performing all summer." (Nick McGregor) City Park, 1354 Park Ave., 6 p.m., $49 lawn; $89 reserved, tickets.parkcity.institute

TUESDAY 7/17
Logic, NF, Kyle
Most listeners likely know the rapper Logic from last year's No. 1 single "1-800-273-8255," an anti-suicide song featuring Khalid and Alessia Cara. Calls to the number, which is the National Suicide Prevention Lifeline, reportedly tripled after Logic performed the song at the Grammy Awards. Outside of that Macklemore-esque single, however, the Maryland-based MC is a beastly rapper with a fierce, punchline-packed delivery more suited to turn-up tunes than mental health PSAs. But he has an uneven history in that regard. Rather than simply knocking hard, Logic's studio albums are often convoluted and overstuffed with meditations on race, religion and half-baked philosophies on universal oneness (see: last year's Everybody). His high-profile mixtapes, however, tend to deliver the dope beats and tricky flows his fans really want (see: Bobby Tarantino II, which has the distinction of debuting at No. 1 on the Billboard charts back in March). He's a rapper with absolutely insane freestyle skills—one of his go-to moves is solving a Rubik's Cube while flowing off the top of his head—and a nimble, technically complex delivery that draws adoration from rap nerds everywhere. And that's just it: Logic might be unequipped to tackle the day's greatest social ills in the manner of Kendrick Lamar, but there's no shame in that. If he sticks to making bangers, he could easily rise into the upper echelon of modern rappers. (Howard Hardee) Usana Amphitheatre, 5150 Upper Ridge Road, 5:30 p.m., $25-$89.50, usana-amp.com

WEDNESDAY 7/18
Jeff Beck, Paul Rodgers, Ann Wilson
It's well-known that Mr. Beck is ranked among the greatest rock guitarists of our time. However, let's not confuse this Beck with the effusive pop pundit who bears the same surname. This particular Beck also goes by "Jeff" and has, for more than 50 years, remained part of a holy triumvirate that includes colleagues and occasional collaborators Eric Clapton and Jimmy Page. All three first gained legendary status in the '60s with the seminal British blues band The Yardbirds, and like his two cohorts, Beck went on to build a brilliant subsequent career—first at the helm of his namesake Jeff Beck Group, which initially included both Rod Stewart and future Rolling Stone Ron Wood, and later as an instinctive innovator with a fascination for blues, fusion, rock and rockabilly. Beck's contributions to albums by Mick Jagger, Tina Turner, ZZ Top, Diana Ross and Cyndi Lauper affirm his star-studded pedigree, while this Arrowfest Stars Align Tour puts him in some stellar company as well. Even at age 74, Beck still retains his youthful demeanor, given his trademark rooster-cropped haircut, endless varieties of sleeveless shirts and scarves, allowing him to rock out in full sartorial splendor. Most importantly, Beck's fretwork is as nimble as ever, ensuring his guitar god status remains secure. (Lee Zimmerman) Usana Amphitheatre, 5150 Upper Ridge Road, 5:30 p.m., $29.50-$350, usana-amp.com