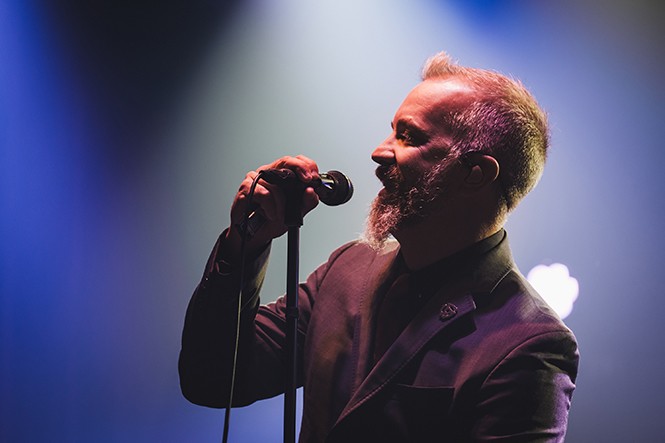 THURSDAY 7/19
JJ Grey & Mofro
JJ Grey & Mofro's come swamp-rock roots are legit. Born and raised in Jacksonville, Fla., Grey and longtime bandmate Darryl Hance met while working as air-conditioning techs before the burgeoning jam band circuit warmed up to their Southern-fried roots rock. The band's first two albums—2001's Blackwater and 2004's Lochloosa—were directly influenced by the lakes, rivers and creeks the pair grew up near. Famed blues label Alligator Records released the band's next few records, which are also deeply rooted in home with themes like Country Ghetto, Orange Blossoms and Georgia Warhorse, a nickname for a particularly tough North Florida cricket. Ol' Glory, JJ Grey & Mofro's most recent full-length album, embraced the band's diverse roots: funk, gospel and even a more heaping helping of Skynyrd-esque Southern rock. It took more than a decade, but they've matured into seasoned veterans, earning acclaim from The New York Times and The Wall Street Journal, song placements on House of Cards and near-universal praise for their hard-charging live show, which mixes the electricity of Muddy Waters, the Memphis soul of Stax and the skronk of Parliament Funkadelic. Back home, JJ Grey still follows the rhythms of the land, tending the former chicken farm founded by his grandparents that now boasts a recording studio, a gym and a 50-strong stand of pecan trees. In other words, JJ Grey is as authentic as it gets, entering a state of blissful ecstasy when he and his band hit their deep-groove peak. (Nick McGregor) The Depot, 8 p.m., 13 N. 400 West, $30 presale; $35 day of show, 21+, depotslc.com

Exmortus, The Absence, Hatchet, ToxicDose, Legion
"You ever get the feeling L.A.'s dead?" Chances are if you follow underground punk rock, you know where this cringe-worthy question comes from: an infamous 1984 interview between Henry Rollins and a local rockabilly youth. (Oh, what we wouldn't give to hear the grandiloquent Rollins' answer today!) But seriously, let's answer that question: Is L.A. dead? On the contrary, Los Angeles' music will never die. War thrashers Exmortus are a testament to that, bringing brutality to the metal community for more than 16 years. Exmortus call themselves "neoclassical shredders," but thanks to a bunch of white dudes wielding tiki torches, neo-anything gets a bad rap. However, these four dudes are reclaiming their mantle—one could say the band's founder and guitarist/vocalist, Jadran "Conan" Gonzalez (who looks like a young Tom Araya from certain angles under the stage lights), was destined to keep the City of Angels' metal scene alive. Growing up, Gonzalez was surrounded by musicians: his father and uncle were in a death metal band, and his grandparents also played guitar and sang tunes to the aspiring metalhead. In 2008, Exmortus released their first LP, In Hatred's Flame, when Gonzalez was just 18. Now, with three more albums under their war belts, Exmortus has returned this summer with their latest album The Sound of Steel, joining up with tourmates Hatchet and The Absense and locals ToxicDose and Legion SLC to ring in the occasion. (Rachelle Fernandez) Club X, 445 S. 400 West, 8 p.m., $15 presale; $18 day of show, 21+, facebook.com/clubxslc 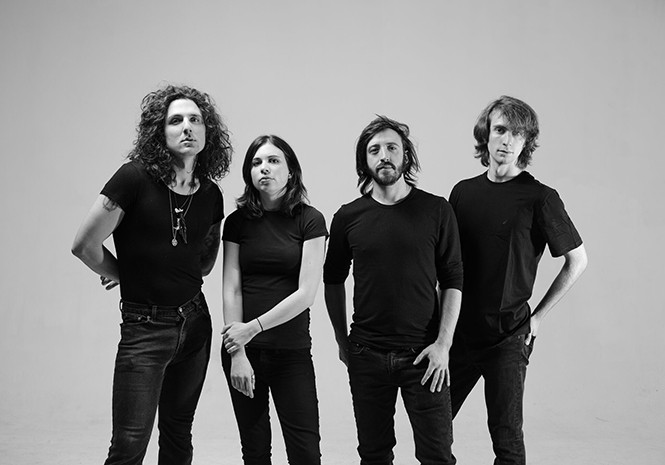 FRIDAY 7/20
Moon Darling, Dwellers, Crook and the Bluff, Lord Vox
When it comes to '60s-inspired rock 'n' roll, the offerings in today's music world are endless. But there's something special about Seattle's Moon Darling. Perhaps it's the injection of synth-pop into the classic rock template, or frontman Michael Julian Escobar's towering frame, which calls to mind Robert Plant or Brian May. Perhaps it's drummer Michelle Nuño lighting fireworks in the back, or bass player Jack Jay and keyboardist Matthew Buckner keeping the groove going on the sides. It could be the backlit nature of Moon Darling's music, road trip vibes dominating 2016 album Dreams and more ambitious overtones evident on new EP By the Light of the Moon. As venerable Seattle rock journalist Dave Segal said, "Moon Darling tweaks your nostalgia ganglia" with a "fluid, controlled strain of psych rock." It's hard to understand in writing, but live, there's a sense of singularity that wafts from Moon Darling. Catch them here with local bands Dwellers, Crook and the Bluff and Lord Vox. (NM) The Loading Dock, 445 S. 400 West, 9 p.m., $10, 21+, theloadingdockslc.com

SATURDAY 7/21
James McMurtry, Bonnie Whitmore
Given the fact that he's the offspring of acclaimed novelist Larry McMurtry, singer/songwriter James McMurtry comes by his narrative abilities quite naturally. However, his dad did more than simply instill in young James a talent for storytelling. He also bought him his first guitar at the age of 7, which his mother then taught him to play. McMurtry learned the rest by observation, and eventually finished as a finalist at the Kerrville Folk Festival's songwriting competition, the launching ground for many a budding career. He later caught the attention of John Mellencamp, who subsequently agreed to produce McMurtry's debut album. That, in turn, led to his contribution to the soundtrack for the film Falling from Grace, which also features songs by John Prine, Joe Ely and Dwight Yoakam. That's distinguished company, but for the bulk of the past 25 years, McMurtry's been releasing albums on his own, sharing rugged and resilient songs flush with defiance and determination. In 2005, McMurtry took a sharp political turn on Childish Things, combining blue-collar anthems with an insurgent stance. Still, he hasn't been all that prolific of late—it's been three years since his last full-length album, Complicated Game, which came a full six years after the previous one. Let's hope he returns to writing soon; in these troubled times, his insight is valued more than ever. (Lee Zimmerman) The Commonwealth Room, 195 Commonwealth Ave., 7 p.m., $30, 21+, thecommonwealthroom.com 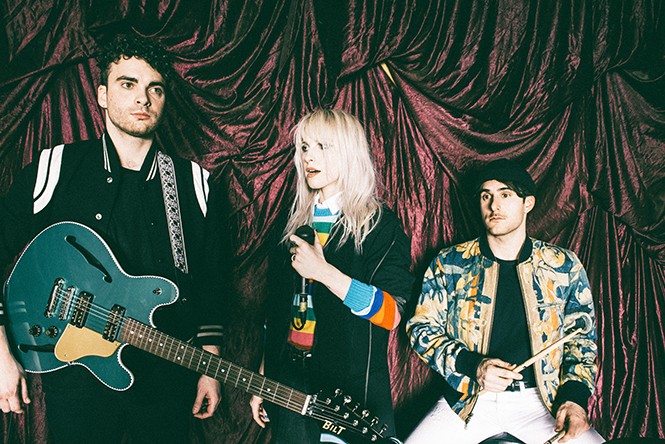 MONDAY 7/23
Paramore, Foster the People, Jay Som
It would be easy to attribute Paramore's international success to lead singer Hayley Williams. Modern-day guitar god John Mayer called her "the great orange hope," a description that alluded not only to her boldly-tinted hair, but also to the fact that Williams strikes such a commanding presence, drawing comparisons to Avril Lavigne and Kelly Clarkson at one extreme and Debbie Harry, Siouxsie Sioux and Gwen Stefani on the other. With various members exiting the band early on, Williams has helped foster the essential edge and imagery needed to cultivate a popular appeal, notching countless film, video game, MTV and late-night TV credits. Over the course of 14 years and five albums, the band has cultivated a playful pop approach that incorporates elements of new wave, punk and synth. Not surprisingly, they've been compared to any number of other equally successful upstarts: Panic! at the Disco, Blink-182, No Doubt and, yes, the other band on the bill, Foster the People. Anyone longing for a band to love would be hard-pressed to find one more perfect than Paramore. (Lee Zimmerman) Usana Amphitheatre, 5150 Upper Ridge Road, 6:30 p.m., $35- $79.50, all ages, usana-amp.com 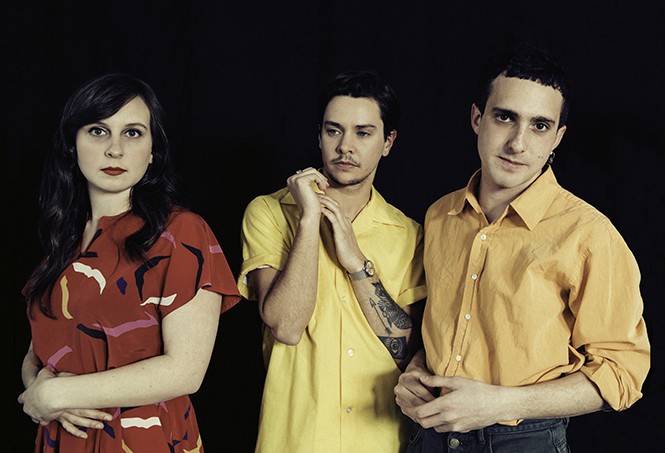 TUESDAY 7/24
Flasher
A boom of protest music is underway in response to the increasingly intense dumpster fire of American politics, with artists as diverse as Fiona Apple and Run the Jewels speaking out to fist-pumping effect. By no coincidence, punk is as vital as it's ever been. Case in point: Sister Polygon, a record label run by the members of the post-punk band Priests, is carrying on the long tradition of grassroots protest-punk coming out of Washington, D.C. The associated trio Flasher—featuring guitarist Taylor Mulitz (also the bassist in Priests), bassist Daniel Saperstein and drummer Emma Baker—makes moody punk for the modern counterculture. Musically, the band shifts in a blink from shimmering shoe-gaze to overdriven grunge. Flasher earned early acclaim for its 2016 self-titled debut EP, and have since delivered a steady stream of tunes full of surprising tempo changes and inventive three-part vocal harmonies that led up to the debut full-length Constant Image. A 10-song collection riddled with highlights like the stutter-stepping "Sun Come and Golden," Constant Image also includes "Material," which makes a bleak statement on everyday reality for 9-to-5 types who live for nights and weekends: "Laughter in this century/ Is a misery afterglow." But the band proves they're no strangers to having fun on "Skim Milk," a straightforward punk banger with airy vocal hooks that will likely win over fans of Sonic Youth. Talk about fist-pumping indeed. (Howard Hardee) Kilby Court, 741 Kilby Court, 7 p.m., $10, all ages, kilbycourt.com