THURSDAY 7.21
Chet Faker
When Aussie Nick Murphy covered Blackstreet's "No Diggity" in 2011, the video spread like an outbreak, leading to three EPs (one, Lockjaw, with friend/collaborator Flume) and his debut full-length, Built on Glass (Future Classic/Opulent, 2014). That third EP, Work (Detail/Downtown, 2015) is another collaboration—this time, with U.K. DJ Marcus Marr—and it sprouted from a random back-and-forth on Twitter. The four-track, 25-minute release showcases the clever lyrics and late-night, somnambulist observations and introspection (layered over, and dovetailing with, Marr's variously ethereal and funky production) that quickly endeared Faker to a growing base of fans. Canadian electronic musician Kaytranada and local DJ Brisk open the show. With Brisk's decades-spanning funk/reggae/hip-hop/house blend, Kaytranada's blend of dance music and hip-hop/R&B, and Faker's soul-infused trip-hop, this is a fitting kickoff of the 2016 iteration of the Twilight Concert Series. Pioneer Park, 350 S. 300 West, 7 p.m., $5 advance/$10 day of show, TwilightConcerts.com

FRIDAY 7.22
#FIXTHEFOX: Corey Fox Benefit Show w/ The Lovestrange
Provo promoter Corey Fox and his venue Velour passionately support local musicians, and Friday's show is about reciprocity—raising funds to help Fox get a kidney transplant. Power pop/new wave/dork rock quartet The Lovestrange exists today in large part because Fox encouraged Strange to return to music after a 25-year break. "There have been much larger benefit shows for #FIXTHEFOX by much bigger bands," says Strange, referring to the $300-a-ticket benefit show last April by Neon Trees and Imagine Dragons, plus other (more affordable) events involving Fictionist, The Moth & The Flame and a Madison Arm-led all-star benefit/mixtape. In spite of this, Strange says "the need is still great ... and we wanted to do something, too." Barsie and Sonsapapa open. (Randy Harward) Velour, 135 N. University Ave., Provo, 8 p.m., $8, VelourLive.com

TUESDAY 7.26
Dolly Parton
In the late '70s and early '80s—when the internet had yet to enlighten the world to freakishly heavy bosoms—Parton's ample endowments were ubiquitous, a common topic for everyone from wannabe workplace comedians to late-night talk-show hosts. It was as though there wasn't much else to her; the music was ancillary. This was during the time when popular music wasn't a genre of pre-fab nothings, but an actual measure of what really resonated with listeners, when payola perhaps wasn't so prevalent and radio stations offered a variety of music. Inside of an hour, you could hear soft/yacht rock, R&B, novelty songs ("Pac-Man Fever," Weird Al), hard rock and even country—stuff like Ronnie Milsap, Terri Gibbs, Sylvia and Ms. Dolly, who always seemed to have a single out there, like the Kenny Rogers duets ("Islands in the Stream," "We've Got Tonight"), the impossibly cheerful "Here You Come Again" and the bouncy, titular hit single from the film 9 to 5. Add that to her country hits—tracks like "Coat of Many Colors," "Smoky Mountain Mammaries—er, Memories" and "Jolene," and you'll see she's had quite an impact on popular culture. And it's not just because of her physical and musical attributes: She played lead roles in 9 to 5 and The Best Little Whorehouse in Texas, and started her own theme park. Even better, she's possessed of an infectious cheer and irresistible sweetness tempered with a no-bullshit attitude, fueling altruistic, rebellious stances. Case in point: In 2005, she exemplified a truly Christ-like Christian by standing up for what's right by writing "Travelin' Thru" for the film Transamerica and contributing "Sugar Hill" to the Human Rights Campaign's LGBTQ rights awareness compilation, Love Rocks. Today, at 70, she remains, like the title of her current album and tour, Pure & Simple, retaining the qualities that made her America's busty sweetheart, a real national treasure. UCCU Center, 800 W. University Parkway, Orem, 7:30 p.m., $75-$100, UCCUCenter.com

The Joy Formidable
When Welsh trio The Joy Formidable released their major-label debut The Big Roar (Canvasback/Atlantic, 2011), it was met with mostly slobbery reviews. But since rock critics can be reactionary contrarians and bandwagon jumpers, some threw shade. That's the music criticism ecosystem for ya, maintaining stasis lest some upstart rock band get too big too fast and prematurely burn out/fade away—or worse, become a hideous monster drunk on unwarranted praise. There's something to the compliments and the criticism: The band tried to marry expansive, wall-of-sound production to shoegaze, and getting mixed results from trying to give two opposing aesthetics equal time on Roar as well as Wolf's Law (2013), which received similar good and bad marks. With their third album, the movie-length (83 minutes!) Hitch (2016), they dial things down a tad, and get raw—which, they say, describes their emotional state, since singer-guitarist Ritzy Bryan and bassist Rhydian Dafydd wrote the album in the midst of breaking up. The bright side of achieving balance and focus on the ironically titled album is likely cold comfort for the band—but a formidable joy for music critics and fans alike. With The New Regime. The Urban Lounge, 241 S. 500 East, 8 p.m., $16 in advance, $18 day of show, TheUrbanLoungeSLC.com 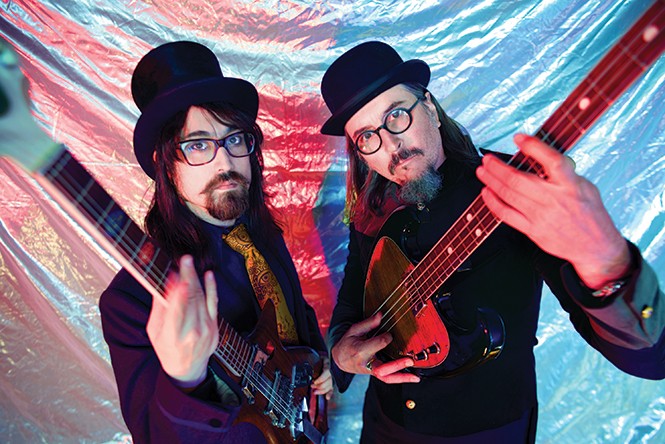 WEDNESDAY 7.27
The Claypool Lennon Delirium
Primus mastermind Les Claypool has so much creative juice that he founds, records and tours with a new solo or side project every few years—most of 'em staffed by noteworthy and equally virtuosic musicians. Among them are Colonel Claypool's Bucket of Bernie Brains (with far-out guitarist Buckethead, late P-Funk keyboardist/producer Bernie Worrell and Primus drummer Brain) and Oysterhead (with Phish's Trey Anastasio and Police drummer Stewart Copeland). As with Primus, each project is tied together by Claypool's signature oddball lyrics, sinus-infection vocals and slap-pop-tickle-choke-pound-throttle-whomp bass acrobatics. Naturally, they're all immensely enjoyable and interesting listening ... but also sublimely strange. This latest such outlet pairs Claypool with Sean Lennon, the spawn of John Lennon and Yoko Ono. Consider what unholy sounds might come from pairing Claypool and the upshot of a—some would say diabolical—genetic brew of a Beatle and the world's foremost vocal stylist/performance artist/destroyer of greatness. Yeah. It's pretty crazy, with Beatles melodies, sounds fit for German Expressionist horror flicks, and some Zappa-esque freakouts dropped in among the expected Claypool-delia. Lennon told Rolling Stone that he and Claypool bonded because they both "tend to like the notes that other people hate," and that inspirations for Monolith on Phobos (ATO) range from the Monkees' cinematic acid-trip Head, Buzz Aldrin's tales of a monolith on one of Mars' moons and hunting for mushrooms together (not the fun kind). Even wilder is that, although the music is inspired by and ostensibly made for substance fun, both men say it's fueled more by wine than anything, and even includes a cautionary ditty called "Oxycontin Girl." Claypool's just full of surprises. The Depot, 400 W. South Temple, 8 p.m., $30 in advance, $35 day of show, DepotSLC.com

WEDNESDAY 7.27
Spindrift, L.A. Witch
Since 1992, the L.A.-via-Delaware band Spindrift has made a genre out of instrumental cult film soundtracks, mainly working in the "spaghetti western" genre. They're so good at it that they inspired a film based on their album The Legend of God's Gun, and are hired to score films (Dust Up, Diablo) and land songs in TV shows (Eastbound & Down). Joining them tonight is L.A. Witch, an all-female trio that self-identifies as "reverb-soaked, punked-out rock." That lets you know the group rocks, is punk in spirit and sounds like they record in a garage so big, it echoes. They also strongly resemble '80s cowpunks like The Gun Club and X—with Sade Sanchez sounding like the latter group's Exene Cervenka using Hope Sandoval as a puppet. (RH) The Garage on Beck, 1199 Beck St., 9 p.m., $10, GarageOnBeck.com