The five members of Grizfolk succeeded in joining their various musical influences to create a style all their own after migrating west from locales as disparate as Stockholm and New Orleans, only to end up together in Los Angeles. A blend of folk/Americana, electro and bright-eyed pop, Grizfolk's sound is fun and lighthearted, as heard on the band's wanderlust-fueled debut EP, From the Spark, released in March. In fact, Grizfolk love being on the road so much that they made an ongoing film series called The Vagabond Diaries, in which they document their various on-tour adventures as "postcards for our fans," says vocalist Adam Roth in an interview with Paste Magazine. While you're watching Grizfolk videos, check out the awesomely goofy lyric video for "The Struggle," in which a lone Boy Scout dances awkwardly and shoots slingshots at enemies disguised as cans while camping in the desert. (Kolbie Stonehocker)
Kilby Court, 741 S. Kilby Court (330 West), 7:30 p.m., $10, KilbyCourt.com; limited no-fee tickets available at CityWeeklyStore.com


As the first-ever hip-hop-themed Rooftop Concert Series show, tonight is going to be killer. Energetic rap group Can't Stop Won't Stop started in Provo but relocated to Los Angeles, and their old-school influences (such as Wu-Tang Clan and Beastie Boys) are apparent in their entertaining new album, Wildebeest. Also performing is rap crew House of Lewis, who have the stage presence to get the audience amped up and the clever, self-deprecating rhymes that will give you the irresistible urge to try to rap along while alone in your car (speaking from experience). And R&B singer and rapper Mimi Knowles has been hustling hard lately, winning a Gigg contest for the opportunity to open for Boyz II Men and even scoring an opening slot at this year's Stadium of Fire, and for good reason: His voice is full of genuine soul. (Kolbie Stonehocker)
Provo Town Square Parking Terrace, 100 North & 100 West, 7:30 p.m., free, RooftopConcertSeries.com 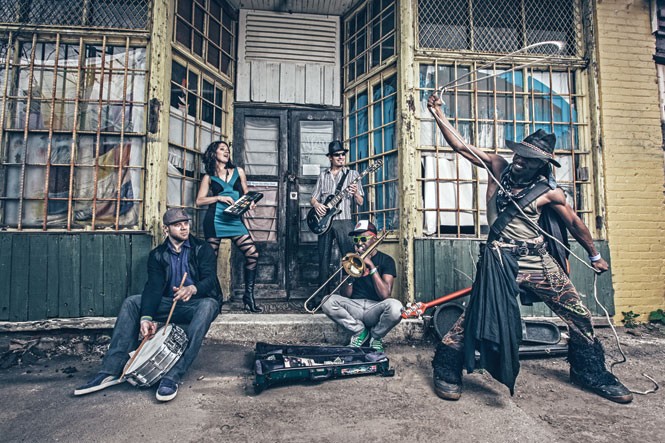 
There are two types of bands: those that take themselves way too seriously, and those that make a giant ass-shaped blimp. But with a name like Yo Mama's Big Fat Booty Band, they need such a glorious flying object, called (what else?) the "booty blimp." The Asheville, N.C., five-piece's music gets the floating wonder's real-life counterparts shaking, a sexy blend of funk, rap, rock and soul, all sprinkled with intergalactic spacedust. Yo Mama's Big Fat Booty Band's latest album, 2013's Onward!, is a blast to listen to, featuring silky vocals from Mary "Mama Funk" Frances, horns, synths and classic funk influences, such as on "Juices & Berries" and the ridiculously catchy hip-hop number "Truck Fallin' Off." The Family Gallows will also perform. (Kolbie Stonehocker)
Bar Deluxe, 666 S. State, 9 p.m., $7 in advance, $10 day of show, BarDeluxeSLC.com


For young music fans, Warped Tour is rite of passage. The long day in the sun will likely yield blisters, sunburn and voices worn out from screaming, but it doesn't matter; all that does matter is finally getting an up-close look at that all-important band whose album has been played on an endless loop on fans' phones. And this year's lineup should get a lot of those fans excited. Representing genres such as rap, punk and metal, acts including Chelsea Grin, Cute Is What We Aim For, Every Time I Die, K.Flay, Motionless in White, Saves the Day, The Devil Wears Prada and Yellowcard will hit Warped Tour's various stages, all for an economical, teenager-friendly (and parent-friendly) price. Don't forget: Get in line early, and slather on that sunscreen. (Kolbie Stonehocker)
Utah State Fairpark, 155 N. 1000 West, 11 a.m., $23.50-$30 in advance, $40 day of show, VansWarpedTour.com


Born in Harlem in the '40s, blues legend Henry St. Claire Fredericks, aka Taj Mahal, knew music was his path from a very young age. With musician parents, Taj Mahal grew up surrounded by music, taking to piano, clarinet, trombone, harmonica, guitar and, of course, singing. His music career has involved touring with his multiple bands over the years, recording numerous albums—including his latest, Hidden Treasures of Taj Mahal 1969-1973, a two-disc collection of unreleased material—and having his music featured in several movies, and his work isn't limited to the realm of blues. Fascinated with the roots of music, Taj Mahal is constantly learning about musical styles as diverse as Hawaiian, Caribbean and African, and he has no plans of slowing down. "Even at the end of 40 years, in many ways my music is just getting started," he says in his online bio. John Hiatt & the Combo will co-headline. (Kolbie Stonehocker)
Red Butte Garden Amphitheatre, 300 Wakara Way, 8 p.m., $37 garden members, $42 general public, RedButteGarden.org


To get the full effect of the music created by prolific Seattle-dweller Zach Burba, the mastermind behind Iji, make sure to listen while looking at his Seashoes comics, found under the "Dribbles" section of his website, DogVibrations.com. Burba's tunes—heard most recently on 2013's Unltd. Cool Drinks—are easy-on-the-ears, lo-fi pop ditties made with his conversational singing voice, synths, drums, saxophone and other interesting sound snippets (he plays many of the instruments himself), and they pair perfectly with his quirky drawings of dogs, dinosaurs and musicians. His lyrics are sometimes imagery-rich vignettes, sometimes nonsensical, but they're always poetic, as he sings about his observations of the world, snacks and playing music. Check out the piano-rich "Hush Puppy" and the spacey "Magic Lanes." Also on the bill are excellent local singer-songwriters Nick Neihart (of Pentagraham Crackers) and Drew Danburry, as well as Marvelous Good Fortune. (Kolbie Stonehocker)
Kilby Court, 741 S. Kilby Court (330 West), 7:30 p.m., $7, KilbyCourt.com


Psychedelic rock quartet Cheers Elephant have been boasting the best indie-rock haircuts since 2007—according to the band, at least. But they have a lot more going for them than just that: Their 2012 release, Like Wind Blows Fire, proves the band can get asses shaking with catchy bass lines and fans singing along to harmonious vocals set to upbeat melodies. The album has definite '60s beach-rock influences, making you wonder how the band calls Philadelphia, not Southern California, home. 90's Television, Anthony Pena and Creature Double Feature will open. (Natalee Wilding)
Kilby Court, 741 S. Kilby Court (330 West), 8 p.m., $5 in advance, $7 day of show, KilbyCourt.com