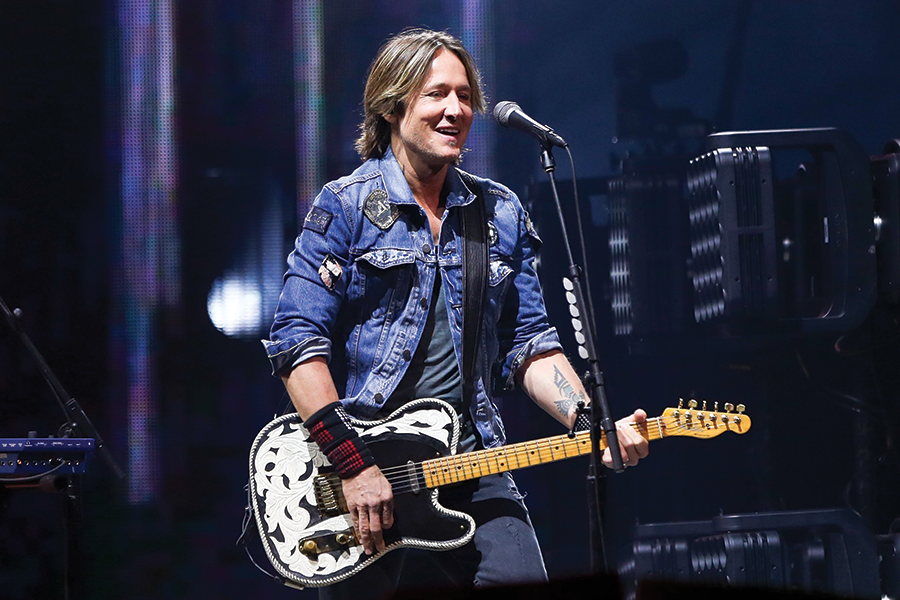 THURSDAY 7/4
Keith Urban
To make use of an old expression, Keith Urban would seem to share in the best of both worlds. A native of lands down under—Australia and New Zealand, specifically—he continually reigns at the top of the charts. And given that he's married to actress Nicole Kidman, he also mingles among the Hollywood elite. Add to those advantages his reputation as an exceptional guitarist, his Everyman demeanor, an ongoing role as a judge on American Idol, enough gold records to fill Fort Knox and practically every honor imaginable—Grammys, CMT Music Awards, Country Music Association Awards, Billboard Awards, Academy of Country Music Awards and People's Choice Awards—and it's little wonder that his star still shines so brightly. Happily, he doesn't rest on his reputation, but instead mines a crossover appeal that attracts fans of country, rock and the various genres in-between. In addition to the nine albums he's released in the past 30 years, his headlining tours—including his current Graffiti U World Tour—have affirmed the fact that he's an electrifying live performer and a consistent draw capable of connecting with fans and pundits alike. Not surprisingly then, "We Were," the single released last month, was accompanied by these musings from Urban himself: "I like the idea that life just happens. At some point, whether in the moment or not, you just gotta go with it." Fame and fortune aside, that's something everyone can hope for—celebrating one's independence not only on July 4th, but every other day as well. (Lee Zimmerman) LaVell Edwards Stadium, 701 E. University Parkway, Provo, 8 p.m., $35–$250, byutickets.com

FRIDAY 7/5
Sub-Radio, Galactic Touring
Sub-Radio is an interesting name for a band that actually seems to be stomping their own beat atop the very definition of radio pop. The D.C.-based sextet delivers infectious, bright pop peppered with vocalist Adam Bradley's carefree falsetto, spirited group shouts and fast drumbeats that echo the pace of the heartbeats in the youthful narratives described in their songs. In their 2019 single "Better Than That"—where the lyrics smack of Carly Rae Jepsen and the guitar does some 1975-esque jangling—Bradley sings, "Everybody's talkin'/ and I'm feeling forgotten/ are you thinking of me? 'Cause all I see is you and me gettin' high for free, just trying to figure it out." Their upcoming EP was produced by Dylan Bauld, whose work with Halsey and Lights ensures that we can only expect more of their pop-perfect sound, which would be at home on any of my high-school playlists in 2011. Yes, their sound (along with their coordinated, bright, florally-accented outfits) harkens back to a moment in time when what was taken initially as indie pop quickly transformed into the standard for pure pop, when bands you discovered on Tumblr were suddenly making it onto the radio. It turns out the reason for this is that they've been together since 2009, when they were all, in fact, in high school together. There's something admirable about a band willing to stick to each other, and a sound, this way. If you want a dose of glittery pop positivity, be sure to catch them at ABG's Bar in Provo (a fitting location for such a pop act) alongside The Tourists. (Erin Moore) ABG's Bar, 190 W. Center St., Provo, 7 p.m., $10, 21+, abgsbar.com

SATURDAY 7/6
Priests, Olivia Neutron-John, 90s Television
Propulsion is the name of the game for post-punk trio Priests. The Washington, D.C.-based rippers lurch out of the gate on their new album The Seduction of Kansas, funneling their particular brand of American rage into rapid-fire bursts of cultural critique. Think digital immersion is destroying our youth? "Youtube Sartre" and "68 Screen" should serve as your new rallying cries. Obsessed with examining the United States' imperial history? "Good Time Charlie" will obliterate your preconceived notion of military intervention. Fascinated by the decaying of mid-century mythology? Vocalist Katie Alice Greer feeds your fire on The Seduction of Kansas' bookends, "Jesus' Son" and "Texas Instruments," which blend the danceable urgency of synth-pop with a sneering summation of our country's hollow consumerism. The new record's ferocity is particularly impressive when you consider that Priests' three-person configuration is fresh; founding bassist Taylor Mulitz left the band on good terms after 2017 debut Nothing Feels Natural. But Greer, drummer Daniele Daniele and guitarist G.L. Jaguar rebuilt Priests from the ground up, "sawing off the fourth leg of a chair and rebuilding it to balance on three" as they put it in a news release for Kansas. With production from famed engineer John Congleton and multi-instrumental contributions from Janel Leppin, however, Priests 2.0 pulses and agitates with even more fire and fury. As Greer sings on "Control Freak," updating pop culture's most iconic Kansan for the 21st century, "You're out of the woods, Dorothy/ I'm your control freak/ I'm your 'no place like home'/ Bedsheets tucking you to sleep." If the ever-evolving insanity of the American experiment fascinates you, Priests are here to roust you from your slumber. (Nick McGregor) Kilby Court, 741 S. Kilby Court, 7 p.m., $12 presale; $14 day of show, all ages, kilbycourt.com

The New Orleans Suspects
Given its musical legacy and indelible imprint on American culture, it's appropriate that New Orleans should lend its name to an all-star group of revered musicians who represent the city with distinction and diversity. The New Orleans Suspects can easily be considered a super-group of sorts, given that the individual members are all veterans of some of The Crescent City's most distinguished ensembles—among them, The Neville Brothers, The Radiators and The Dirty Dozen Brass Band. Indeed, each one of them that has contributed to the city's enduring legacy, both past and present. Not surprisingly, then, the music they make spans a remarkable array of influences, from jazz and funk to rock, zydeco and R&B. Currently consisting of guitarist Jack Eckert, bassist Charlie Wooten, sax player Jeff Watkins, pianist CR Gruver and drummer "Mean" Willie Green, the group's collective expertise reflects a vast array of combined influences. Little wonder then that for the past decade, the sound they've created has made an incisive impression of its own. That ought to come as little surprise, given that each of their four albums demonstrates the verve and versatility that only a place like NOLA can offer. Their sound also incorporates the players' outside associations, which, over the years, have included The Grateful Dead, Bob Dylan, Paul Simon, Cedric Burnside, Sonny Landreth, Joss Stone, and the Meters, among others. Even if you've never been to Mardi Gras, the Suspects share a sense of the sound their hometown is famous for. (Lee Zimmerman) Canyons Village at Park City, 4000 Canyon Resort Drive, Park City, 6 p.m., free, all ages, canyonsvma.com

TUESDAY 7/9
Shanghai Beach, Child of Night, Glume
Brooklyn-based Steven Salazar, the man behind Shanghai Beach, is right at home in the current movement of new dark wave, which has blossomed at the hands of contemporary acts like fellow Brooklyn-ites Black Marble, Drab Majesty and The Soft Moon. Compelling as it is, moody, wormy, wire-y synths and snappy, clean electric drum beats hook you into an endless, spiraling dreamscape the way only electronic music can. I'm surprised and disappointed that as a fan of this genre's resurgence, this is the first I'm hearing of Shanghai Beach, which has been an active project of Salazar's since the release of the single "Space" in 2013. His long career, which has found him experimenting with sound and medium (he uses analogue and digital synths on his 2018 EP Contamination), is very respectable. He's certainly plugged into the genre, explaining to Louder Than War that "Around the time I was writing Contamination, I was really into Boy Harsher, High Functioning Flesh, and a lot of Ministry's first record, With Symphony." His self-released fast, aggressive 2017 album Bizarre Mutation is certainly that, a move in an altogether more intense direction, where he ditches his deep new-wave vocals to let the shadowy synth landscape stand on its own. I'll be sure to make up for lost time by seeing him when he comes through town with fellow gothic dark wave band Child of Night from Columbus, Ohio, and SLC's own Glume, the solo dark wave project of Tyler Tovey. (EM) The Urban Lounge, 241 S. 500 East, 7 p.m., free, 21+,
theurbanloungeslc.com

WEDNESDAY 7/10
Timecop1983, Arcade High, Korine
Jordy Leenaerts, the sole member of Timecop1983, has been making music since the days of the 386 and MS DOS. Although he exists in the crowded '80s retrowave scene, Leenaerts' compositions stand out for their heart, with sentimental and even romantic undertones. You can see an easy contrast from openers Arcade High and Korine—both experiment with a similar synth sound, but theirs is more percussive and energized while Timecop1983's strengths lie in Leenaerts' slow, winding ballads. For newcomers to this genre, the reliance on a reimagined '80s aesthetic might be grating, but it's hard to imagine the sound divorced from the visuals, and it's probably why artists in this space are thought of as "cinematic." Timecop1983's most recent album, 2018's Night Drive, gave us some interesting collaborations with The Midnight, LeBrock and Kinnie Lane providing vocals. Leenaerts also collaborated with Chris Kobke on last year's Crossing Souls, a Stranger Things-influenced action-adventure video game about teens who discover a mysterious stone that lets them interact with the plane of the dead. This is all to say that, while one could imagine the sound of Timecop1983 based on a quick description alone, Leenaerts' sound thrums at just the right wavelength to break through preconceptions. His most recent single, "My Delorean," features Primo, who channels moments of Kate Bush in each chorus (despite singing about a car!). It's the only Timecop1983 material to be released this year, so fans should find this live performance a treat to tide them over until the next full release. (Parker Scott Mortensen) The Complex, 536 W. 100 South, 8 p.m., $20, all ages, thecomplexslc.com