FRIDAY-SUNDAY 6/2-4
Ogden Music Festival, feat. Hot Rize, Sarah Jarosz, Parker Millsap, Joshua James
For four years, Ogden Friends of Acoustic Music (OFoAM) put on two of the most anticipated local music festivals—this one, and the Ogden Roots & Blues Festival. Don't fret, fans of unplugged music: OFoAM's OMF is OMG-good. Venerated bluegrass outfit Hot Rize, about to celebrate 40 years together, headlines along with singer-songwriters Sarah Jarosz (pictured) and Parker Millsap, a solo set by Hot Rize main man Tim O'Brien and performances by nine other acts, including our own Joshua James and The Hollering Pines. As always, there are side attractions, including the Utah State Instrument Championships and workshops where you can learn about musical instruments, including how to play them and even build your own. Advance sales are closed, so you'll have to pay at the gate. (RH) Fort Buenaventura Park, 2450 A Ave., see site for schedule, $10-$99, all ages, ofoam.org

FRIDAY 6/2
Whisperhawk
"This is what I've sunk to," Michael Gross says in a self-deprecating text to City Weekly. He means that the release show for the debut EP of his new solo act, Whisperhawk, "will just be me, solo, in my basement—the same way I recorded the songs." The move requires no apology, even a half-joking one, because it makes sense. Everybody knows artists have to get creative in order to get their music heard—and it's all about social media, anyway. A one-man operation like Gross might as well fire up the webcam, 'cause it has to be easier than booking a gig and getting people to show up. This is convenient; nobody has to leave home or shower or even wear pants in order to see the show. And you really oughta check out what Gross—whose songs, voice and guitar you've heard with noted local indie-pop act The Brobecks, pop/rock band Michael Gross & the Statuettes and electro-pop trio The Lazy Waves—has been up to. Whisperhawk lands between The Brobecks and the Statuettes, with some of the latter's early twang, and Gross' songwriting continues to mature as he refines his craft. Watching him perform the tunes by himself, where they were born, should make up for any intimacy lost in the stream. But no matter how you hear it, Whisperhawk's EP will reach out and hit you. (Randy Harward) Live stream, 9 p.m., free, all ages, facebook.com/whisperhawkmusic

SATURDAY 6/3
The Slow Poisoner, Believes in Ghosts, Mr. Hull
A year ago at the Boing! Anarchist Collective, three dozen people witnessed Andrew Goldfarb, aka The Slow Poisoner, put on a dark, spooky cross of Pee-Wee's Playhouse and Sunday-school class. Armed with a tentacled, Lovecraft-meets-Purple Rain guitar, kick drum, minimal lights and maximum props, Goldfarb weaved tales of monsters, moons and mushrooms while scrolling through easel-mounted visual aids like our church teachers used in their own wacky tales. Like a splicing of hillbilly vampire troubadour Unknown Hinson and Pee-Wee Herman, Goldfarb held the crowd rapt with songs like the goofy "Hot Rod Worm," creepy-cool "Knives" and interstitial stories. The most captivating moment, however, was during "In the Gloom" when Goldfarb wandered the room singing and banging on a rattling contraption. "On the recording, I use a chain," Goldfarb says. "I switched to a donkey skull after I realized the chain was destroying stages." That gem closes Goldfarb's killer new album, Swamp Fist! (Rocktopus), produced by splatterpunk author, musician and filmmaker John Skipp. This is a donation show, but you'll wanna bring extra money to buy Goldfarb's books, comics, music and bitchin' black-light paintings. (RH) Boing! Anarchist Collective, 608 S. 500 East, 7 p.m., $5 suggested donation, all ages, facebook.com/theslowpoisoner

SUNDAY 6/4
TajMo': The Taj Mahal & Keb Mo' Band, Black Pacific
Not long ago, master bluesman Taj Mahal performed at the Eccles Center in Park City. Now he returns with Keb Mo', another noted blues musician, at his side. Their collaboration and debut LP are under a portmanteau of their names, which rolls off the tongue as freely as music flows from them. Taj's gritty sound and Keb's smooth adult-contemporary sensibilities mesh nicely on the album, which features plenty of name guests (Bonnie Raitt, Joe Walsh, Sheila E.). It's also a diverse, entertaining listen, with an array of tones: smoldering late-night Chicago blues ("Don't Leave Me Here"), happy front-porch numbers ("She Knows How to Rock Me"), pop ("All Around the World"), world-music influences ("Soul") and rock (a cover of The Who's "Squeeze Box"), among others. It's a great primer for the Utah Blues Festival coming up on June 17. (RH) Red Butte Garden, 300 Wakara Way, 7 p.m., $38-$45, all ages, redbuttegarden.org

TUESDAY 6/6
Chuck Prophet
Although his time playing guitar with the much-loved Paisley Underground band Green on Red is a marquee résumé item, Chuck Prophet's solo career as a singer-songwriter is illustrious. Each new album is a true all-killer, no-filler event—crammed with great songs that fit his jangle-pop background, but encompass so much more. His 14th album, Bobby Fuller Died for Your Sins (Yep Roc), is largely Petty-esque jangle-rock, but also spans folk, blues, gospel and fuzz-rock. As usual, Prophet's wordsmith-ery makes his story-songs immensely satisfying, and your first spin of the record will earn an immediate reprise. Tuesday's support act is still TBD, but even if one doesn't materialize (and someone will), you won't care. That said, if it's still up in the air, and the State Room booker is listenin', I nominate any of the following locals: Starmy, Pig Eon or 90s Television. With equally talented songwriters fronting each band, that'd make a helluva bill. (RH) The State Room, 638 S. State, 8 p.m., $20, 21+, thestateroomslc.com 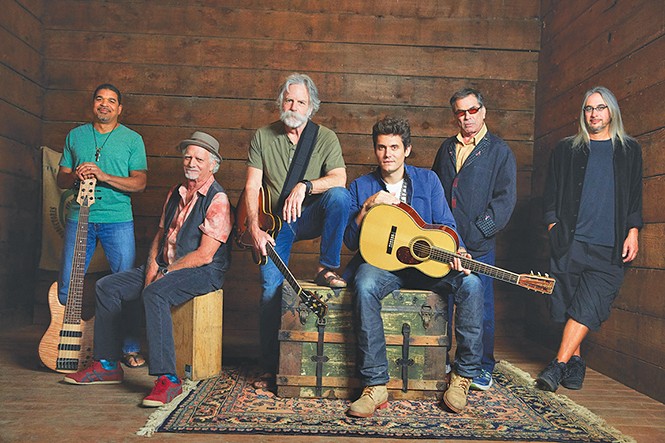 WEDNESDAY 6/7
Dead & Company
Since Jerry Garcia died in 1995, the Grateful Dead's music has survived in various configurations of original and new members: RatDog, The Dead, Furthur, Phil Lesh & Friends. Dead & Company consists of five founding members of The Dead: singer-guitarist Bob Weir, drummers Mickey Hart and Bill Kreutzmann, bassist Oteil Burbidge (Allman Brothers Band, Tedeschi Trucks Band) and keyboardist Jeff Chimenti (numerous Grateful Dead spinoffs). "Company" refers to the only other official member: perpetually fresh-faced, prolific celebrity p-hound John Mayer. You gotta wonder how that happened. Although he cut the adult contemporary crap a decade ago and started playing to his very real guitar strengths, Mayer still hasn't shaken his image. So, essentially dropping him into the Grateful Dead in place of iconic, fluffy-faced co-frontman, guitarist and songwriter Garcia? It's odd, but it works. On YouTube clips, Mayer looks like a kid jamming with his uncles. That's kinda perfect, since D&C happened because Mayer heard the band on Pandora one day, became obsessed, befriended the band, learned the songs and practically begged to join. A planned one-off show in 2015 became a tour, and Dead & Company is now a real band playing epic three-hour shows that have critics and fans agreeing that D&C is almost a resurrected Grateful Dead. Imagine that. (RH) Usana Amphitheatre, 5150 S. Upper Ridge Road (6055 West), 5:30 p.m., $40-$149.50, all ages, usana-amp.com