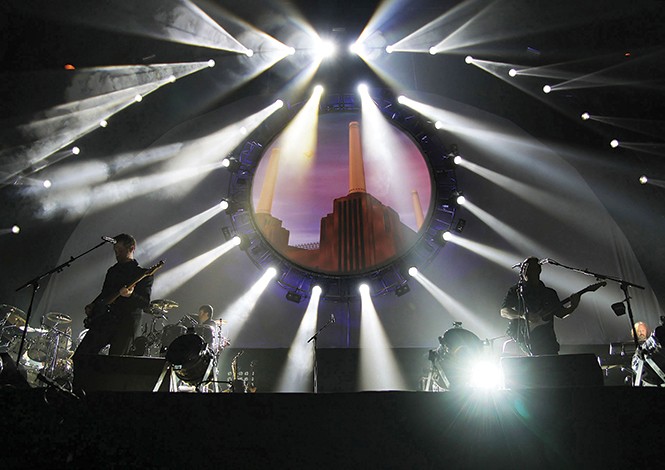 We've already established this: "Floyd Good," and so is The Australian Pink Floyd Show. So what about this British tribute to one of the greatest rock bands of all time? Do they have an edge because they, like the original group, are English? There's not much of a difference, actually. Each tribute act is staffed by sound-alike musicians who do a great job replicating hits like "Comfortably Numb" and "Money." They both have amazing light shows, but the Brit act doesn't incorporate Aussie imagery into the show. The Aussie act has more connections to Pink Floyd, but they're both sanctioned by the band, and have rubbed elbows with the originals. It boils back down to the simple truth that Floyd is good—and, when you can't see the real thing, a capable, talented replica will do nicely. (Randy Harward) Maverik Center, 3200 South Decker Lake Drive, 8 p.m., $25-49.50, MaverikCenter.com

Tedeschi Trucks Band, Sharon Jones & the Dap-Kings, Doyle Bramhall II
You've gotta wonder if Derek Trucks and Susan Tedeschi's kids even care that both of their parents are bona fide guitar heroes. How cool would that be? And consider the DNA trickle-down. What kind of blues-minded prodigy might be on deck to take over for Mom and Dad? It boggles the mind. Even more so when you know that Trucks descends from Allman Brothers Band drummer Butch Trucks. With a gene pool as packed as that, you just know there's a Chosen One on the horizon. Make way for Buckethead Trucks! Sharon Jones and the Dap-Kings, vanguards of the soul revival, and Texan guitar slinger—himself the offspring of a noteworthy musician—Doyle Bramhall II open. (Randy Harward) Red Butte Garden, 300 Wakara Way, 6 p.m., $70, RedButteGarden.org

Betcha you've never heard of "drunk grass." Maybe you're thinking it's marijuana soaked in Everclear, or just soggy with beer. Well, you're close. Kinda. Not really. "Drunk grass" is a musical genre, albeit not a formally recognized one. Yet. But Whiskey Fish—a raucous quintet fronted by bearded maniac Brandon Anderson—aims to change that. Whiskey Fish plays twanged-up versions of "good ol' country songs" by the likes of Johnny Cash, Willie Nelson, Waylon Jennings and two outta three Hanks. And, akin to what you may recall from locals Purdymouth WV (wherefore art thou?), Whiskey Fish likes to countrify "a bunch of songs that should have been country to begin with." You know, stuff by Motorhead. And you know Lemmy would've made a damned fine country & western troubadour. They also play tracks by The Misfits, Iron Maiden, Queens of the Stone Age, The White Stripes and, says Anderson, "every outlaw country fucker ever." (Randy Harward) A Bar Named Sue Highland, 3928 S. Highland Drive, 10 p.m., free, ABarNamedSue.net

Indie-pop songsmith Alex Winston's video for "Careless" opens with her in a swimming pool surrounded by pensive old men. Then, the action moves inside to the rec room of a nursing home for bingo, and then to a quiet corner in the same place for chess. Dancing around them in a tight white dress like she does, you'd think the bunch of old men would notice. Yet, they don't—even when Winston sings, "Give it to me/ I'm down on the floor/ Make me believe/ This can't be ignored/ I want to be/careless." They don't even notice when she stretches out across their laps. What's most beguiling about Winston, though, is her airy but powerful voice, which channels Kate Bush and Hope Sandoval—and how she just bleeds in her lyrics. As for Neon Trees, you know them well enough by now. Great band. Homegrown. (Randy Harward) Brent Brown Ballpark, 800 W. University Parkway, Orem, 5:30 p.m., $25, SmithsTix.com

A new star is rising in the glitch universe. Corey Baker, better known by his stage name Kill Paris, is touring the United States and Australia on his latest album Galaxies Between Us, available to stream or download for free on the artist's website. Coming from a background in instrumental music, the young DJ and producer has seen wild success in the past two years as his chilled-out funky sound has caught the attention of electronica audiences at festivals like Coachella and Electric Zoo, and earned remixes from glitch superstars like Grammatik and Griz. His latest effort has a polished feel, with focused, dance-y synth lines nicely balanced against beats that aren't overly bass-heavy. Club- and festival-goers should feel right at home in Kill Paris' lush soundscape. The album's sampling sounds fresh and original, as do the nu-jazz lyrics contributed by guest artists Royal and Marty Rod. Philadelphia-based trap and hip-hop-influenced producer Louis Futon opens. (Derek Edwards) The Depot, 400 W. South Temple, June 13, 9 p.m., $16 in advance, $21 day of show, DepotSLC.com

When a rapper drops names such as novelist Kurt Vonnegut, he'd better know his shiz. What's more, he should be able to turn a phrase. Sage Francis is one such hip-hop artist. He proved as much with four albums of sick beats and phat phrases—then he took a four-year hiatus. Francis pulled out the Vonnegut reference when he returned a year ago with Copper Gone (released on his own Strange Famous Records label). The first lines of "Vonnegut Busy" are taken straight from the celebrated author: "Of all the words of mice and men/ The saddest are 'it might have been.' " Francis then takes off on an existential trip that bemoans struggling while the 1 percent thrive, and how the world is quickly becoming a hive mind. Not only does Francis know what he's talking about, he hasn't lost a step. (Randy Harward) Urban Lounge, 241 S. 500 East, 8 p.m., $15 in advance, $18 day of show, TheUrbanLoungeSLC.com

Are you watching Daredevil on Netflix yet? If so, you may have heard Surfer Blood's "Swim." The track is actually from their debut album, 2010's Astro Coast (Kanine Records). The Florida band is now touring behind their third album, 1000 Palms (on new label Joyful Noise), from which the single "I Can't Explain" comes. It finds the band still mining that dreamy, reverb-y indie rock that sounds as through it comes straight from the ocean waves beneath a particularly breathtaking amber sunset. Well, if it ain't broke, don't fix it. The New Electric Sound, a Provo band that also leans heavily on surf-rock, opens. (Randy Harward) Velour, 135 N. University Ave., Provo, 8 p.m., $12, VelourLive.com

In Cooder-White-Skaggs, you get three of the biggest names in American roots music. Ricky Skaggs is, well, Ricky Skaggs—a multi-instrumentalist with a mile-long discography that includes award-winning solo work and collaborations with Keith Whitley, Earl Scruggs and Doc Watson, among others. Sharon White, aka Mrs. Skaggs, was part of the country group The Whites, whom you may know by such heartachy tracks as "You Put the Blue in Me" and "If It Ain't Love (Let's Leave It Alone)." As for guitarist Ry Cooder, he's probably most familiar as the producer of the Buena Vista Social Club album (1997) and as an ace session- and side-man who has worked with The Rolling Stones, Neil Young, John Hiatt and even Captain freakin' Beefheart. This is the first tour for the trio, and it's kicking off here in Salt Lake City. If it's not already implied by these musicians' credentials, I'll just go ahead and say it: If you like roots music, do not miss this show. Robert Earl Keen opens. (Randy Harward) Red Butte Garden, 300 Wakara Way, 7:30 p.m., $52, RedButteGarden.org