FRIDAY 6/14
Utah Blues Festival w/ Tab Benoit, Sue Foley, Jason Ricci and The Bad Kind
The blues come in many hues, as affirmed by the opening day lineup for the fifth annual Utah Blues Festival—a diverse and dynamic celebration of a genre that reaches back to American music's roots, even while retaining its contemporary credence. Headliner Tab Benoit offers ample evidence; with 20 albums released over a 25-year career, he's mastered the sound of the Mississippi Delta and established an impressive niche as a gifted guitarist in the process. His multiple honors—two B.B. King Entertainer of the Year Awards, four Blues Music Awards and induction into the Louisiana Music Hall of Fame—testify to his credibility and conviction. Another notable performer, singer and guitarist Sue Foley, is no slacker herself. Her string of 15 albums, frequent guest appearances and tireless touring regimen has reaped some 17 Maple Blues Awards in her native Canada, and three Trophees de Blues de France, as well as several Blues Music Award nominations. Likewise, Jason Ricci and the Bad Kind add their own bona fides. Cited as one of the best harp players of his generation, Ricci has graced albums by such notables as Johnny Winter, Walter Trout, Joe Louis Walker, Mark Hummel and Cedric Burnside (among others), and was named Best Harmonica Player at the 2010 Blues Music Awards, and performed at the Rock 'n' Roll Hall of Fame induction ceremonies. A lineup like this gracing Salt Lake City provides ample reason to rejoice in the blues. (Lee Zimmerman) The Gallivan Center, 239 S. Main, 5–10 p.m., $35, all ages, utahbluesfest.org 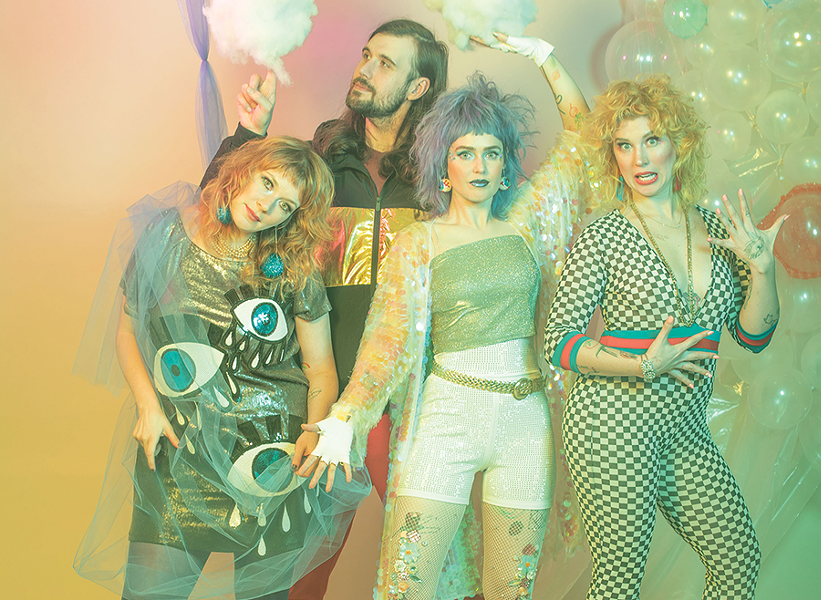 Tacocat, The Paranoyds
With a band name engineered for internet meme dominance, Seattle quartet Tacocat could be forgiven for sticking to their snark-punk roots. But Emily Nokes, Lelah Maupin, Bree McKenna and Eric Randall have matured all the same, blending their trademark lyrical subversion with sunny pop blitzkriegs on their new album This Mess Is a Place. Tacocat's first release on Sub Pop Records skews tighter and brighter than rowdy recent releases NVM (2014) and Lost Time (2016), even as new singles "Hologram" and "The Joke Is Life" wallow in the digital exhaustion of 21st-century life. But negativity is but a bump in the road for Tacocat, as they spin political fears and social anxieties into self-help anthems for the coming 2020 election. On "Crystall Ball," Nokes sighs, "What a time to barely be alive." On "Little Friend," she spouts, "The constant is change, endless and free." And on the otherwise-playful "Grains of Salt," she enlists her bandmates in a shouted group chorus that brings vague social media uplift to sweaty, punk-show life: "Don't forget to remember who the fuck you are!" Don't sleep on opener The Paranoyds, another gritty, garage-birthed four-piece running punk rock through a doo-wop, surf rock, and horror flick filter. (Nick McGregor) Kilby Court, 741 S. Kilby Court, 7 p.m., $13 presale; $15 day of show, all ages, kilbycourt.com

SATURDAY 6/15
Alabama, Exile
Although they weren't always appreciated for being innovative or inventive, Alabama's massive accumulation of country chart-toppers gained them a mainstream respect they decidedly deserve—and they're celebrating this history now, 50 years later. Not that they've been ignored; since rechristening themselves as Alabama in 1977—shedding their original handle "Wildcountry"—they've chalked up a remarkable 30 No. 1 singles, including such fan favorites as "Love in the First Degree," "Dixieland Delight" and "Mountain Music." Seven platinum albums and sales of some 75 million records further confirm their popularity. Although they went on hiatus in 2003, their subsequent reunion tours beginning in 2010 helped reaffirm their standing as one of the most popular country bands in history. Indeed, Alabama is often credited with establishing the idea that an entire country group can have one fundamental focus, emulating the model set by rock and pop. With three of its original members still at the fore—Jeff Cook (lead guitar, keyboards, fiddle, backing vocals), Randy Owen (lead vocals, rhythm guitar) and Teddy Gentry (bass, backing vocals)—they branded themselves as an essential self-contained ensemble, setting the precedent for many of the popular country bands that followed, including Rascal Flatts, Florida Georgia Line, Lady Antebellum, Little Big Town and Old Dominion. That's no small achievement, especially considering the fact that country music once only allowed solitary singers to dominate the spotlight. Credit Alabama for broadening those borders. (Lee Zimmerman) The Maverick Center, 3200 Decker Lake Drive, West Valley City, 7 p.m., $59.50-$129.50, maverikcenter.com

SATURDAY 6/15
Andre Nickatina, J. Lately, Chino Foreal, Cig Burna, Zazilla
Previously known as Dre Dog, San Francisco's Andre L. Adams (aka Andre Nickatina) has made quite the name for himself over the years—without the same major label backing of his peers. His music has always been well-received in the Bay Area and the West Coast in general, where he gained a strong following through unfiltered raps, slapping beats and a unique brand of bravado to call his own. Although Nickatina has proven himself a capable and lasting artist in his own right, with more than 25 years in the business, he is definitely key to hip-hop folklore for the simple fact that he is able to carry on the legacy of deceased legend Mac Dre, whose stories continue to enthrall fans 15 years after his tragic passing. Nickatina's latest release Pisces is more of the same Bay Area mood music, powered by the cuts "The Mecca Dawn" and "4 Y'all Junkies," in which he doesn't stray too far from the formula that put him and Dre into the consciousness of rap fans decades ago. If you're a rap fan who enjoys classic American cars and can't stand auto-tuned crooning and form-fitting clothes, you'll probably fit right in with this crowd. Will someone pick out their 'fro and sport an oversized airbrushed T-shirt for nostalgia's sake? Who knows? It's a possibility. Also performing is fellow San Francisco rapper J. Lately, along with Utah's own acts Chino Foreal, Cig Burna and Zazilla. (Keith L. McDonald) Soundwell, 149 W. 200 South, 8 p.m., $25, 21+, soundwellslc.com

SUNDAY 6/16
Dead Meadow, Lord Vox
"Stoner rock" is quite the loaded name for a genre, especially for a band that's worked endlessly over the past 20 years, releasing seven albums since their inception in 1998 and working with multiple member changes. Dead Meadow, instead, feel more like a heavy psych band, with steely, whiney guitars at the forefront that provide a marked pulse unique to the genre, and bass so low in the background it's hard to tell it's there. Although effects pedals create a rich swirl of sound, Dead Meadow is caught up in their own rhythm more than anything else. Early releases like their 2002 self-titled album certainly turn to the wooziness of psychedelia, and songs are altogether more lightweight than the heavier, steelier sound that shows up on their later albums. The changes in sound, as with many bands that have been around for more than two decades, are probably the result of lineup changes. For their 2018 and most recent release, The Nothing They Need, the group reunited with all the original founding members—Jason Simon on vocals and guitars, Steve Kille on bass and sitar and Mark Laughlin on drums. Their upcoming show at Metro will give folks a chance to hear their melodic, nostalgic and more stripped-down album surely among some of their weedier, steelier older material. Locals Lord Vox open with their own brand of melancholic psychedelia. (Erin Moore) Metro Music Hall, 615 W. 100 South, 8 p.m., $15, 21+, metromusichall.com

TUESDAY 6/18
Kid Congo & The Pink Monkey Birds, Slim Cessna's Auto Club, Brain Bagz
Brian Tristan—aka Kid Congo Powers—might not be much of a household name, but he's been remarkably successful at finding odd jobs and thriving in the weirder, cobwebbed corners of the rock world. Over the course of the past 40 years, the California guitarist has racked up a startlingly impressive résumé. He presided over the Ramones fan club during the band's '70s heyday, co-founded influential post-punk act The Gun Club along with frontman Jeffrey Lee Pierce, contributed to some of Nick Cave and the Bad Seeds' most beloved albums in the late '80s and early '90s, and briefly appeared on the acclaimed Angels of Light album How I Loved You in 2001. Since 2006, Kid Congo has struck out on his own, fronting his band The Pink Monkey Birds to concoct a scuzzy, loose-limbed take on garage punk that's reminiscent of his short-lived stint with The Cramps in the early '80s. Joining Kid Congo & The Pink Monkey Birds at The Urban Lounge is Slim Cessna's Auto Club, a supergroup that brings together power players of the Denver gothic country scene to construct hellish visions of all-American mayhem. Local psych-punk act Brain Bagz opens. (Nic Renshaw) The Urban Lounge, 241 S. 500 East, 8 p.m., $18 presale, $20 day of show, 21+, theurbanloungeslc.com