Having started out as an instrumental group, Other Lives (from Stillwater, Okla.), is edging back to that original concept with their third LP, Rituals (TBD Records). The vocals in the alternative-indie album are slower, more drawn out and not always comprehensible, making them more of an additional instrument than a vehicle for lyrics. They're a little less Decemberists, a little more Bon Iver—but a few shades darker. Opener Hamilton Leithauser (frontman of The Walkmen) will perform songs from his peppy, Walkmen-esque album Black Hours (Ribbon Music). Inspired by Frank Sinatra, Leithauser is also touring a cover of "All or Nothing at All." Provo band The Moth & the Flame opens. (Tiffany Frandsen) Ogden Twilight Concert Series, Ogden Amphitheater, 343 E. 25th St., 6 p.m., $5 in advance, $6.50 day of show, OgdenTwilight.com

Into the Wide (Dualtone), the fourth studio album from San Diego (now Brooklyn) indie rock band Delta Spirit was written from a Hurricane Sandy-ruined studio they rebuilt. There's a little more soul and reverb in this record, but the slight folk and Americana swing still keeps their sound upbeat. The tour in support of the album precedes an extended break from touring in order to write new music. It's fitting, then, that they're making it special by bringing along a list of big-name guests: members of Deer Tick, Dr. Dog, Jessica Dobson (of the Shins), Alec Ounsworth (Clap Your Hands Say Yeah), Richie Eaton, T. Hardy Morris, Robert Ellis and some surprises. (Tiffany Frandsen) Urban Lounge, 241 S. 500 East, 9 p.m., $20 in advance, $22 day of show, TheUrbanLoungeSLC.com 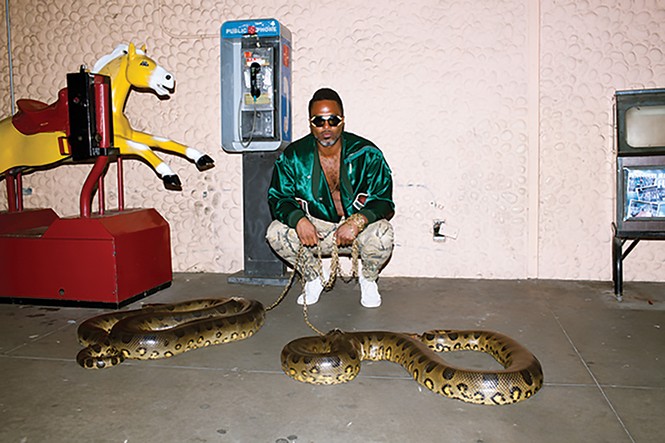 Upbeat indie surf-rockers San Cisco, from the coast of Australia, are touring behind their joyful sophomore album, Gracetown (Fat Possum), named for a coastal Australian town where the band members' families have summer homes. The album is mostly catchy indie pop, but San Cisco's nostalgia for Gracetown is reflected in the hazy pop of the track "Skool," with its lazy acoustic strumming, whistling and toy piano. Cross your fingers for their mash-up of Daft Punk's "Get Lucky" and N.E.R.D's "Hypnotize U." In fact, check it out online before the show, to get properly psyched. Mothxr opens. (Tiffany Frandsen) Kilby Court, 750 S. Kilby Court, 8 p.m., $10, KilbyCourt.com

Piano-playing singer/songwriter Ingrid Michaelson is touring her fifth indie pop album Lights Out (Cabin 24/Mom + Pop). Don't let the New York sweetheart demeanor fool you; Michaelson comes armed with plenty of snark, which she busts out at concertgoers for being rude or not paying attention. With well-known tracks from all of her records over the past 10 years, her setlist pulls pretty equally from Be OK and Human Again. In addition to her originals, she has a rolodex of covers: Elvis Presley's "Can't Help Falling In Love," Radiohead's "Creep" and Cheryl Cole's "Parachute." She doesn't tour this one, but her cover of Gotye's "Somebody That I Used To Know" is worth the four minutes on YouTube. Jukebox the Ghost and Greg Holden open. (Tiffany Frandsen) The Complex, 536 W. 100 South, 8 p.m., $28, TheComplexSLC.com

At 82 years old, Willie Nelson's still kicking ass, touring like a boss and topping the charts. Django and Jimmie (Legacy), his collaboration with fellow country outlaw Merle Haggard, came out on June 2 and, at press time, is No. 1 on the Billboard country charts and No. 7 on Billboard's Top 200. Hell, he could even make his own Top 200 chart—he's released that many albums. Willie's also a 5th degree black belt in the Korean martial art GongKwon Yusul, so back dafuq up. Co-headliner Allison Krauss—playing, as usual, with her band Union Station—isn't even a white belt, but she's a master of bluegrass and country music, with an umpteenth-degree black belt in fiddle-playing. (Randy Harward) Usana Amphitheatre, 5200 S. 6200 West, 7:30 p.m., $29-$70, Usana-Amp.com

A caravan of circus-bluegrass and folk is blasting through Salt Lake City for two performances: one inside at the Garage on Beck and the second the following afternoon for an outdoor Father's Day celebration up the canyon. The three bands hail from Wyoming and will play a blend of Americana, indie, roots and blues. Screen Door Porch, "electrified porch music," if you will, have released their third studio album, Modern Settler (ScreenDoorPorch.com), country and roots-rock record with breezy vocals and gritty guitar riffs. The Patti Fiasco joins with singer Alysia Kraft, a powerhouse of soul and rock. The group lives in Fort Collins, Colo., now, but the sound is still well representative of open, Wyoming-roots rock. The third group, Canyon Kids, has an unexpected twist on Americana rock: a dose of psychedelic soul. (Tiffany Frandsen) The Garage on Beck, 1199 Beck St., June 20, 9 p.m., $7, GarageOnBeck.com; Blues, Brews & BBQs Festival at Snow Basin Resort, 3925 Snow Basin Rd., Huntsville, June 21, 12:30 p.m., free, SnowBasin.com

The intensity of a Death Grips concert is a sight to behold—vocalist Stefan Burnett doesn't just rap, he yells rhymes over the glitch- and sample-heavy tracks from drummer Zach Hill (Hella, Marnie Stern) and keyboardist Andy Morin. The experimental/noise hip-hop trio from Sacramento are touring The Powers That B (Third Worlds/Harvest) and it may be the last time to catch them, as they announced their impending breakup in 2015. Along with tracks from their newest album and favorites their other three full-lengths, expect some unhinged destruction. (Tiffany Frandsen) The Complex, 536 W. 100 South, 8 p.m., $20, TheComplexSLC.com

Fuzzy surf-punk band ToyGuitar, from California, is promoting an upbeat, blissful record, In This Mess (Fat Wreck Chords), down the West Coast this summer before setting off to perform for the rest of the country. Their sound is appropriately sunny, but with enough grunge to give them a '90s garage-band vibe and '70s and '80s English punk edge, which Jack Dalrymple's vocals emphasize. The quartet—Dalrymple, Miles Peck, Paul Oxborrow and drummer Rosie Gonce—have power-rock souls, but a carefree, laidback delivery. Las Vegas psych-rock trio Marion Walker opens. (Tiffany Frandsen) Diabolical Records, 238 S. Edison St., 8 p.m., Facebook.com/DiabolicalRecords

Canadian folk artist Gordon Lightfoot was one of the intimate and personal voices of the '60s and '70s. Although his discography is mainly folk and country-rock, he's a jazz-trained musician (at Westlake College of Music), and some of that influence—along with a sort of carefree energy—is heard in his live set, in tracks like "Make Way for the Lady." What Lightfoot's really known for, though, is his songwriting. Tonight his fans will be anticipating—and singing along to—the sad but badass "Sundown," brutally sad "If You Could Read My Mind" and the vivid semi-epic "The Wreck of the Edmund Fitzgerald," a story-song about the sinking of the titular ship. (Tiffany Frandsen) Sandy Amphitheater, 1245 E. 9400 South, 8 p.m., $25-$45, SandyArts.com/Sandy-Amphitheater