THURSDAY 6/20
Nick Murphy, Beacon
Much like a young actor named Michael Douglas had to take on a stage name because of an already-existing actor with the same name—the actor in question became Michael Keaton—a young Australian musician named Nick Murphy decided to take on a nom du art because of confusion between him and an already-existing musician of the same name. He opted for Chet Faker—an homage to jazz legend Chet Baker—and performed and recorded under that moniker for several years. But in 2016, Murphy decided to reclaim his birth name, and comes to the Ogden Twilight series with songs from his first full-length release recorded under that name, Run Fast Sleep Naked. That record, inspired by an unlikely-seeming collaboration with legendary Def Jam producer Rick Rubin, showcases the diversity of his songwriting, with distortion fuzz complicating the funky groove of lead single "Sanity," an ethereal falsetto rising over "Dangerous," and a swirl of harp twinkling through the plaintive "Hear It Now." "In a way, the name change was me saying that if I lose everything, that's OK with me because I'm still being honest," Murphy said in an April 2019 interview with Billboard. "All people are averse to change. The deepest irony is that what they love about your work is that it was new, but at the same time they want you to keep giving them something that isn't new. It's like hanging onto a breakup." Brooklyn-based electronica act Beacon opens. (Scott Renshaw) Ogden Amphitheater, 343 E. 25th St., Ogden, 5 p.m., $10-$50, ogdentwilight.com

FRIDAY 6/21
Third Eye Blind, Jimmy Eat World, Ra Ra Riot
Third Eye Blind is a band for everyone. They blend the bounce and zip of pop rock with the earnest angst of post-grunge and emo, and their lyrics explore love and relationships in ways that feel intimate and universal. They sound a bit like a lot of other bands, but not a lot like any one of them. While this musical recipe could easily yield generic, featureless glop, that everyman-ish universality is actually Third Eye Blind's single greatest strength, and the secret to how their early albums have endured in a way most of their late '90s peers could have only dreamed of. While the band's critical and commercial success has somewhat waned since the departure of guitarist & songwriter Kevin Cadogan in 2000, more recent efforts like 2015's Dopamine show that frontman Stephan Jenkins is still a dab hand at crafting poignant sets of lyrics and monstrous singalong hooks. Said hooks will be filling the air of the Usana Amphitheatre June 21 when Third Eye Blind stops by as part of their 2019 Summer Gods Tour. Also playing are Jimmy Eat World, a similarly-minded alt-rock act who racked up critical acclaim in the late-'90s before hitting it big during the emo boom of the early aughts. New York indie outfit Ra Ra Riot opens. (Nic Renshaw) Usana Amphitheatre, 5150 Upper Ridge Road, 7 p.m., $21+, thirdeyeblind.com

FRIDAY 6/21
American Football
Teenage angst is a popular topic in most rock-based genres, and in the fields of indie rock and Midwest emo, it's rare to find a band penning lyrics on just about anything else. So it's no small achievement that American Football's 1999 self-titled debut has become one of the most understated yet resonant statements of youthful malaise ever to come from either of those genres. Although the band itself dissolved shortly after its release, American Football went on to be hugely influential, with hundreds of bands mimicking the gentle, layered guitar sounds and frontman Mike Kinsella's plain-spoken, confessional lyricism to varying degrees of success. After spending the 2000s pursuing their own musical interests (Kinsella formed indie-folk project Owen, and drummer Steve Lamos played in a multitude of bands around Chicago), American Football reconvened in 2014 and finally released their second self-titled album, known as LP2, in October 2016. The album was generally regarded as inferior to their now-seminal debut, but still had its fair share of critical praise and commercial success. American Football's third LP, released in March, has been hailed by many as a return to form, with tracks such as the Hayley Williams-assisted "Uncomfortably Numb" featuring some of the group's most mature and thoughtful songwriting to date. American Football is embarking on a worldwide tour in support of LP3. (Nic Renshaw) Metro Music Hall, 615 W. 100 South, 7 p.m., $25 presale, $30 day of show, 21+, metromusichall.com 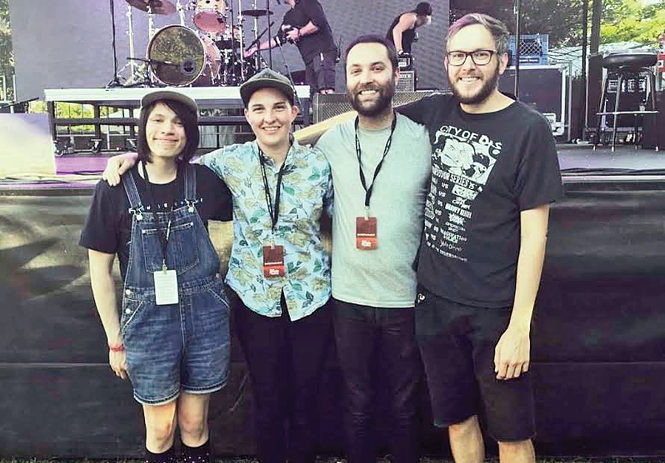 SATURDAY 6/22
Strong Words Album Release and Final Show
Strong Words are one of those rare bands that spends a lot of time on what they have. The past six years have found them honing a melodic, tonally rich sound, with singer/guitarist Cathy Foy—a local multi-instrumentalist and mentor at youth music program Spy Hop—at the center of it all, along with guitarist Brian Lord. Those long years together have culminated in three full-length albums, with a fourth to be released on June 22—which also, sadly, marks their very last show. But it's OK: With Foy's skilled songwriting and a slew of other local musicians involved over the years and albums—Landon Young, Dyana Durfee, Jaime Richards, Jacob Hall and Ryan Ross—the project has grown and changed in satisfying ways that have, and will, stand the test of time. Foy started the band with experience as a drummer, but became a frontwoman in her own right, picking up guitar along the way. From their charming, smooth-around-the-edges debut, 2014's Come Clean, to 2017's The Heaviness Needs a Lift, one hears Strong Words hitting their stride, as their melancholic sound warps into something that is, while still plain-spoken, also open and tender, sometimes pulsing with a certain moodiness; tracks like "I Am Immune" quaked with it. It's not often one gets to hear songs like these paired with a whole new album on the night of a band's last show, but that's what's going down. Be sure not to miss this special band's farewell, where they'll be joined by equally talented acts Durian Durian and Bly Wallentine. (Erin Moore) Urban Lounge, 241 S. 500 East, 8 p.m., $6, theurbanloungeslc.com 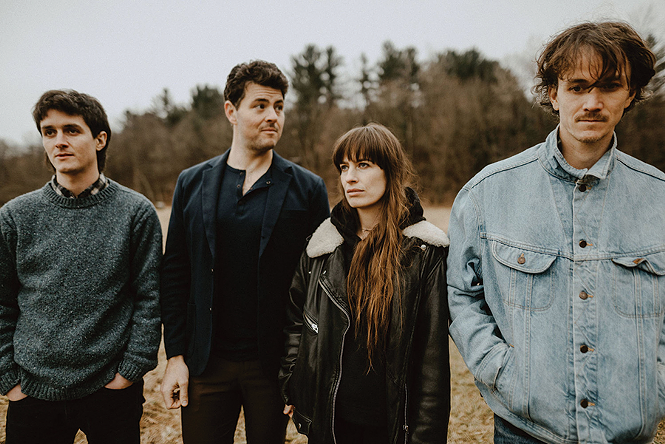 TUESDAY, 6/25
The Felice Brothers, Johnathan Rice
Those who are familiar with The Felice Brothers' music know them to be a band that hews closely to the fiber of authentic Americana. Theirs is a sound that traces its roots back to The Band, Nitty Gritty Dirt Band, The Flying Burrito Brothers and other originators of the sound born from the country-rock crossover of the late '60s and early '70s. Like many of their predecessors, they hailed from humble beginnings. Originally from the Catskill Mountains, they started making music by busking in the New York City subway system. Eventually, they climbed out and toured the country in a minibus, both in the company of others and on their own. More than a dozen recordings followed, including their latest and best album, Undress. Each of their efforts provides an example of a strong rootsy foundation and a decided backwoods ethic, the kind of sound that reverberates like an Appalachian hoedown or a small-town celebration on Saturday night. That said, Undress takes a decidedly darker stance than usual, given that it makes pointed references to the miasma that's infected the nation of late, and the divisions that threaten to tear it apart at the seams. "We live in a world we can't understand," one song finds them singing. Fortunately, that confusion doesn't dispel their energy or exuberance. Chalk it up to that brotherly bond and a distinct feeling of sibling synergy. Get to their show early and catch singer-songwriter Jonathan Rice's own verve and vitality. (Lee Zimmerman) The Urban Lounge, 241 S. 500 East, 8 p.m., $18 presale, $20 day of show, 21+, theurbanloungeslc.com

WEDNESDAY 6/26
Lucinda Williams w/Buick 6
For the last 40 years, Lucinda Williams has written like a poet, sung like a sailor and lived like a musical nomad, defying convention and expectation at every turn. Growing up as the daughter of an itinerant literature professor, she lived in Louisiana, Mississippi, Mexico, Arkansas and even Utah; in her 20s and 30s, she bounced between Austin, Houston, Los Angeles and Nashville while trying to find the right home for her brooding blend of blues, country, folk and heartland rock. In fact, it wasn't until 1998's Car Wheels on a Gravel Road—her fifth full-length album in 20 years—that Williams' commercial success caught up with the critical adoration bestowed on her by fellow riders like Tom Petty, Steve Earle and Emmylou Harris. Two decades on, Car Wheels still sounds revelatory: the throaty lurch of Lucinda's vocals; the hard-driving crunch of guitars from Gurf Morlix and Charlie Sexton; the dustings of dobro and mandolin; the bitter, blurry-eyed take on the rootlessness of relationships. The Grammy-winning album eventually cemented the definition of "alt-country" and "Americana" in the minds of the mainstream music press, re-contextualizing the place that Southern music held in the pop pantheon. Although she's released eight more studio albums since 1998, Car Wheels on a Gravel Road still serves as the main mile marker of Lucinda Williams' career, bisecting its contradictory success into neat before-and-after segments she still skewers to this day: "I remember people asking, 'Where have you been all this time?'" she mused to Billboard last year. "Well, I've been right here under your nose. You didn't know where to put me, so ..." (Nick McGregor) Red Butte Garden Amphitheater, 2280 E. Red Butte Canyon Road, 7:30 p.m., $35-$42, all ages, redbuttegarden.org/concerts