People Under the Stairs, Shy Boys, The Milk Carton Kids, Protoje and more.

Thursday 6/21
Warren G, Matty Mo
"Regulators! Mount up!" When you hear that iconic Young Guns sound bite at Warren G's Salt Lake City show, you know old-school West Coast rap fans are going to hit the dance floor like a herd of cattle. What you might not know is that, way back in 1993, Warren G flipped the rhythm from Michael McDonald's "I Keep Forgettin' (Every Time You're Near)" sample and got "Regulate" on the soundtrack to the 1994 film Above the Rim, leading to one of the most recognizable pop songs ever. Often outshined by compatriots like his stepbrother Dr. Dre, Warren G started his music career in a rap group called 213 with close friend Nate Dogg and cousin Snoop Dogg. Once Snoop's solo career took off, Warren concentrated on carving out his own career, which has now spanned three decades. His clear tone, simplistic rhyme schemes and funk-laced sound has a large following that's lasted through countless changes in styles and tastes.In the '90s, when backpack-wearing lyricists and East Coast purists dominated the rap game, many people vocalized negative opinions of Warren's "G' Up sound." But time has shown that he was much more than just a one-hit wonder—he's placed his stamp on the genre for generations to come. He continues to tour, and he's even working on a new documentary, appropriately titled G-Funk. So, grab your posse and saddle up for some retro "Regulate" fun—but do everyone a favor and leave your six shooters at home, hombre. (Keith L. McDonald) Soundwell, 149 W. 200 South, 9:30 p.m., $27.50 presale; $32.50 day of show, 21+, facebook.com/soundwellslc

Thursday 6/21 – Sunday 6/24
Utah Arts Fest feat. Gomez, A-Trak, St. Paul & the Broken Bones and more
Wrapping your head around the stuffed-to-the-gills entertainment programming at this year's Utah Arts Festival (see p. 18) isn't easy. With four musical stages at Library Square, unique performance areas like The Library Glass Wall and The Round, and the nightly Arts Fest Amplified series, you could see far-flung live music from noon to nearly midnight all four days. For the sake of brevity, we'll focus on the Amplified headliners: five acts that run the gamut of what's hip today and reflect the cornucopia of musical options in Salt Lake City. On Thursday night, rising alt-country star Ron Pope blends his stark storytelling skills (big ups to the poetry of "Twin Falls Idaho") with his scathing Southern rock sensibilities before English post-psychedelia icons Gomez focus on the 20th anniversary of their landmark Mercury Music Prize-winning album Bring It On. On Friday night, A-Trak transplants his tweaked-out turntablism from the clubs of Las Vegas to downtown SLC, instigating what might be the freakiest dance party of the summer. On Saturday night, underground LA rappers People Under the Stairs inspire Utah's rabid hip-hop fans with their brand of socially conscious jams. To close out Arts Fest Amplified, Alabama revivalists St. Paul & the Broken Bones bring their soulful blend of Stax Records, Sly Stone and Prince to town along with the strongest horn section this side of the Mississippi. And don't forget: Each day of the Utah Arts Fest, you can catch excellent local acts that hit every stop on the musical spectrum. This might truly be the best bang for your summer buck. (Nick McGregor) Utah Arts Fest, Library Square, 450 S. 200 East, noon–11 p.m. each day, $15-$50; $25/night for Arts Fest Amplified, all ages, uaf.org

Friday 6/22
Shy Boys, Okey Dokey
Kansas City has been holding a strong musical hand for years. From emo kingpins The Get Up Kids to offbeat favorites like Reggie and the Full Effect and Drugs & Attics to catchy pop acts like Capybara and O Giant Man, the City of Fountains will surprise you. KC's most famous homegrown artist, R&B wonder woman Janelle Monaé, decamped years ago to Atlanta, while elegant optimist Kevin Morby now lives in California. But Shy Boys are holding things down, specializing in ramshackle pop, unpretentious punk and sensitive rock a la the Midwest's most famous indie heroes, The Replacements and Hüsker Dü. Brothers Collin and Kyle Rausch front Shy Boys with best friends Konnor Ervin, Kyle Little and Ross Brown, and their lifelong camaraderie comes through loud and clear in every beautifully harmonized power-pop chorus. Shy Boys' sophomore release, Bell House (Polyvinyl), due in August, tackles the melancholy bliss of domesticity: the Rausch brothers taking care of their aging mother, reminiscing on their DIY punk roots from comfortable digs in the suburbs, rescuing a dog from an abusive owner, getting mugged. In lesser hands, such asinine subjects would easily fall through the cracks of the white-dude-indie-rock firmament. But with the Shy Boys at the helm and blood harmonies in the air, there's something special percolating up from the Paris of the Plains. (NM) Kilby Court, 741 Kilby Court, 7 p.m., $8 presale; $10 day of show, all ages, kilbycourt.com

Tuesday 6/26
The Milk Carton Kids
Consider The Milk Carton Kids a throwback to an earlier age, when harmony-laden, guitar-playing duos scaled the pop charts while sharing a fondness for a folk-like finesse. Think Bob Dylan and Joan Baez, The Everly Brothers, Smothers Brothers, Peter and Gordon or Chad & Jeremy. Granted, while those aren't exactly contemporary comparisons, the particular dynamic duo of Joey Ryan and Kenneth Pattengale clearly has some archival aims in mind. Although similar in style to Simon & Garfunkel, The Milk Carton Kids mine a certain sense of humor that deflates any pomposity or pretentiousness. Indeed, Ryan and Pattengale's self-deprecating comments frequently bring those Smothers siblings to mind, sans the silly staged squabbles. Nevertheless, when it comes to making music, The Milk Carton Kids' close-knit harmonies, softly purred melodies and alluring imagery elevate the duo to the top of the Americana plateau. A steady succession of festival appearances, concerts and albums—Retrospect, Prologue, The Ash & Clay, Monterey and their upcoming effort, the tellingly titled All the Things I Did and All the Things I Didn't Do—have made them unlikely stars at a time when only volume and verbosity seem to matter. Grammy nominees for Best Folk Album of the Year in 2013 and winner of the Americana Music Association's Best Duo/Group of the Year in 2014, they've clearly proven that they're the cream of the crop. (Lee Zimmerman) The Commonwealth Room, 195 W. 2100 South, 8 p.m., $30, 21+, thecommonwealthroom.com

Wednesday 6/27
Protoje, The Indiggnation, The Tribe of I, Vocal Reasoning
Jamaican singer/songwriter Protoje comes by his name honestly. His mother, Lorna Bennett, topped the Jamaican charts in the '70s three times, most famously with an island version of Dusty Springfield's "Breakfast in Bed." His father, Mike Ollivierre, was a revered calypso king in his home nation of St. Vincent and the Grenadines. Their son has taken a different track, however, emphasizing reggae's roots revival. Ever since his first album, 2005's Lyrical Overdose Volume 1, he's been hailed for lyrics that address societal injustices, and his upcoming album, A Matter of Time, packs an even stronger punch. Lead single "Blood Money" skewers Jamaica's corrupt police state, while "No Guarantee" addresses love, hate and jealousy—and the way those emotions reflect our human tendency to engage (or not) with civic political life. Just to keep us on our toes, however, Protoje then dropped "'Bout Noon," the most romantic jam of his career. "When I get up on Monday, a news story may be on my mind," he told Billboard in May. "But when I am on tour for two months and I am going home, I'm not thinking about political corruption; I am thinking about seeing my girl." With frequent collaborator Chronixx, Protoje is redefining the possibilities of breaking into the U.S. market. "How do you even crack that as a reggae artist talking about truth and rights with thought-provoking lyrics?" he mused to Billboard. "It's very difficult, but I do think there has been progress." (NM) Metro Music Hall, 615 W. 100 South, 8 p.m., $20 presale; $25 day of show, 21+, facebook.com/metromusichall 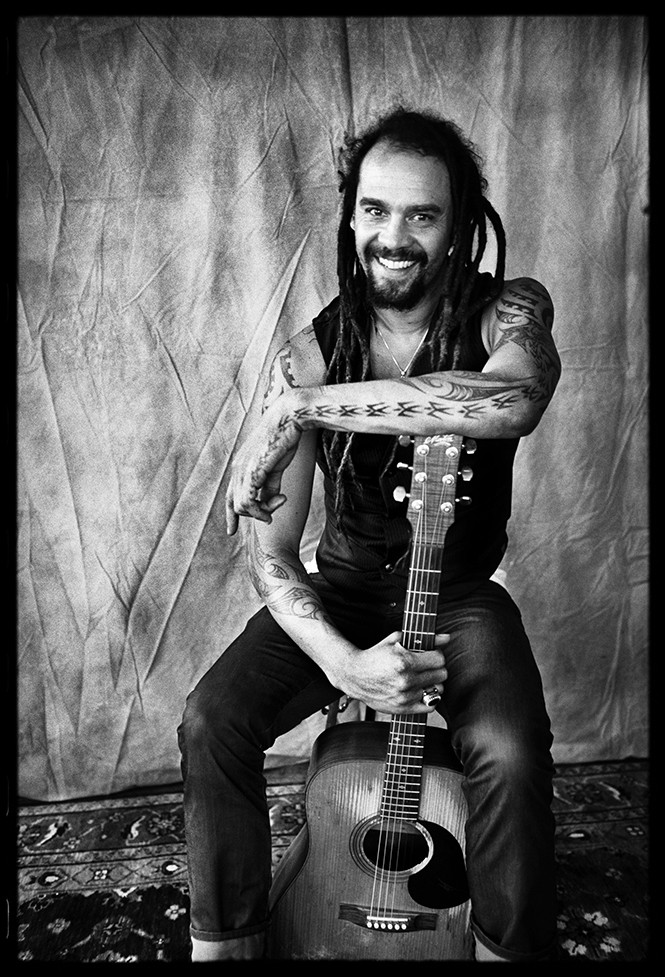 Michael Franti & Spearhead, Victoria Canal, Dustin Thomas
Michael Franti is a jam-pop icon with a career that spans decades, and his live shows are basically big dance parties overflowing with peace 'n' love, the smell of reefer in the air and, of course, "The Sound of Sunshine." But it wasn't always this way: Back in the day, Franti was known for his activism, spoken-word poetry and political-leaning musical projects The Beatnigs and The Disposable Heroes of Hiphoprisy. He puts out music these days through his solo project, Michael Franti & Spearhead, which mixes pop, funk, reggae and folk. Over the past few years, Franti might have veered too far into the mainstream for the tastes of diehard fans—like on the absurdly catchy single, "Say Hey (I Love You)." But he nonetheless maintains an enthusiastic and far-reaching fan base, transforming his career into one that routinely finds him headlining music festivals around the world. And he has certainly remained outspoken on social justice issues. In 2014, Franti called for peace between police and civilians with the single "Same as It Ever Was (Start Today)" and an accompanying music video featuring footage of the riots in Ferguson, Mo., that followed the shooting death of Michael Brown and the infamous "I can't breathe!" choking of Eric Garner at the hands of NYPD. Conclusion: Franti's gone as bubblegum pop as possible, but his music is still packed with socially conscious messaging. Live on a summer night at Red Butte Garden, though, those two strands come together and let everyone set their hips to wiggle and sing along. (Howard Hardee) Red Butte Garden Amphitheatre, 2155 Red Butte Canyon Road, 7 p.m., sold out at press time, all ages, redbuttegarden.org