FRIDAY 6/30
!!!, Panthermilk, Telepanther
!!! (Chk Chk Chk). What more need I say? The New York City dance punks' very name means excitement. On the video for "Dancing Is The Best Revenge," from their latest release, Shake the Shudder (Warp), singer Nic Offer practices what he preaches, raising his voice in pitch and dressing in drag to take on the persona of Nicole Fayu, dancing alongside other queens at Los Angeles' hip gay bar The New Jalisco. The music video shows that the real meaning of punk is becoming whomever you want to be. Friday's concert also honors the 18th anniversary of Kilby Court—our legendary all-ages music space (even Esquire magazine has deemed it one of the "coolest venues in the country") that's been instrumental in birthing our local music scene, pairing great touring acts like !!! with locals Panthermilk and Telepanther. (Brian Staker) Kilby Court, 741 S. 330 West, 7 p.m., $18 presale, $20 day of show, 21+, kilbycourt.com

Metalachi, Jordan Matthew Young, Kapix
Uno (Yaddart, 2012)—the debut album from Metalachi, the world's foremost purveyors of mariachi-flavored metal covers—focused on glammy '80s metal, classic rock and grunge. Now, Dos (2016) appears to satirize the ubiquitous PR-statement so many bands of that era uttered in interviews promoting their next albums: "It's gonna be heavier, but it still sounds like us." To that end, the merry band of Misfits delves into the catalogs of Megadeth ("Symphony of Destruction"), Slayer ("Raining Blood"), Motorhead ("Ace of Spades") and Pantera ("Cemetery Gates") with expectedly awesome results. Expected, because mariachi music is basically Latino bluegrass—and tons of gringo bands, from Bad Livers and Split Lip Rayfield to Hayseed Dixie and the CMH Pickin' On series, have already done the "thrash-grass" thing, performing rock and metal classics on acoustic instruments. We gobble it up like a Red Iguana combo plate every time. It's not all heavy, though: Dos still features hair-band fare like Whitesnake's "Here I Go Again," Van Halen's "Hot for Teacher" and Quiet Riot's "Metal Health." The band even tosses out an original, "Give Me Some Chon Chon," and a faithful take on Los Lobos' "Canción del Mariachi," made famous in Robert Rodriguez' Desperado—making Dos double the party of Uno. (Randy Harward) Urban Lounge, 241 S. 500 East, 8 p.m., $12 presale, $14 day of show, 21+, theurbanloungeslc.com 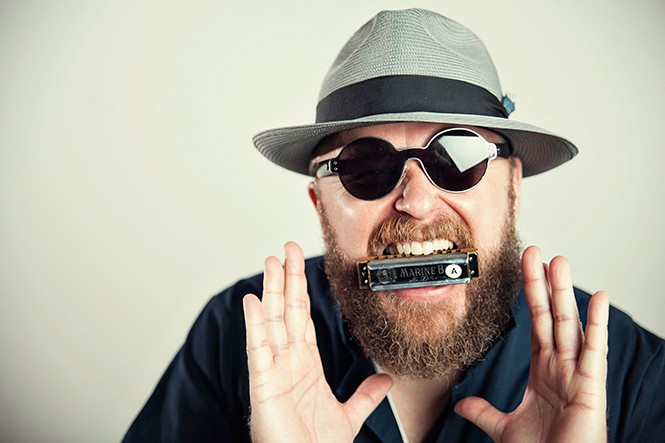 FRIDAY-SATURDAY 6/30-7/1
John Németh, The New Orleans Suspects, Tony Holiday & the Velvetones
Here's the question of the day: Can a guy from Boise, Idaho, truly know how to sing the blues? In the case of John Németh, the answer is decidedly yes. Indeed, this assertive singer and harmonica-wielding wizard paid his dues the hard way, beginning with tenures in a variety of blues bands, constant touring and gigs that often stretched out over seven nights a week. Fortunately, due diligence paid off; no less an authority than Living Blues magazine said his third album, Magic Touch (Blind Pig, 2007), "gives hope that the blues will survive." The album also brought him a Blues Music Award nomination in the Best New Artist Debut category—the first of many accolades. His next set, Love Me Tonight (2009), reached the Top 10 on Billboard's Blues Albums chart, and he's since garnered nods for multiple others. On his latest, Feelin' Freaky (Memphis Grease, 2017), Németh rocks the blues, and his audience. Utahns have two chances to see him this weekend, starting with a solo show at the Bit & Spur in Springdale, and ending at the Park City Summer Concert Series. (Lee Zimmerman) Bit & Spur, 1212 Zion Park Blvd., Springdale, June 30, 10 p.m., $15, 21+, facebook.com/bitandspur; Canyons Resort, 4000 Canyons Resort Drive, Park City, July 1, 4 p.m., free, all ages, parkcitymountain.com

SUNDAY 7/2
Jelly Bread, Too Slim and the Taildraggers, Folk Hogan
You'd figure a triple bill boasting bands with handles like Jelly Bread, Too Slim and the Taildraggers and Folk Hogan would provide a satisfying evening of music, mirth and entertainment. You'd be correct. For starters, there's the eclectic sounds of Jelly Bread, a five-piece band that describes itself on its website as a "blend of desert twang meeting the urban tones of funk and rock" with "exceptional songwriting and storytelling." Trio Too Slim and the Taildraggers base themselves in the blues, resulting in numerous accolades and kudos for namesake Tim Langford on slide guitar. Then there's Folk Hogan, a sextet whose combination of traditional instruments—banjo, accordion, mandolin, etc.—leads to some off-the-wall invention and intentions. In short, don't let the names fool you. Each outfit is well worth witnessing on its own; taken in tandem, you won't find a more creative combination. (Lee Zimmerman) Blues, Brews & BBQ Concert Series; Snowbasin Resort, 3925 E. Snowbasin Road, Huntsville, noon, free, all ages, snowbasin.com

MONDAY 7/3
Guitar Wolf, Isaac Rother & The Phantoms
The first time I heard Guitar Wolf, at Matador Records' 21st birthday celebration in 2010, they struck me as an Asian analogue of Jon Spencer Blues Explosion. While Spencer's music is a bit narcissistic (every other song seems to include him screeching out the band's name), you have to search a little deeper to account for the edgy attack of these axmen. Japanese bands tend to take things to the extreme, and this ultra-crazy garage/punkabilly/noise—or, to use GW's own term, "jet rock 'n' roll"—trio is no exception, adding explosions and jet sound effects to their music, dressing like retro-futuristic greasers (in their own "Jet" clothing designs) and appearing in far-out midnight movies like the zombie flick Wild Zero (1999). Led by singer/guitarist Seiji (aka Guitar Wolf), the group catapulted out of Nagasaki in 1987. That's only 50 years after the United States' momentous atomic bomb drop. (BS) Urban Lounge, 241 S. 500 East, 8 p.m., $13 presale, $15 day of show, 21+, theurbanloungeslc.com 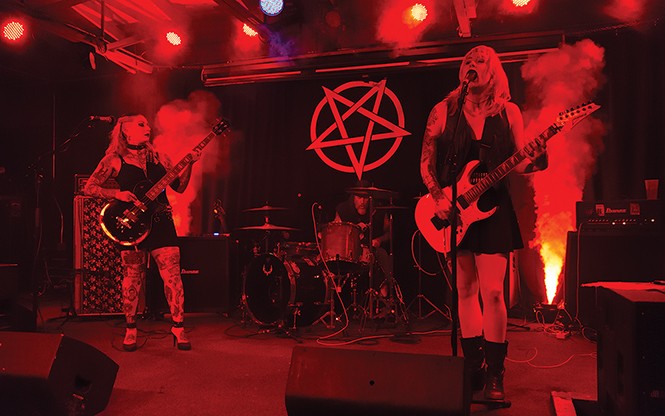 TUESDAY 7/4
Black Metal & Drag Show, feat. Tombs, Hexenkreis, Darklord, Chelsea Siren, Opal Ascension
What is black metal if not a butch drag performance? The black-and-white corpse paint isn't far removed from those huge eye-shadow arches, and the bands really know how to accessorize, with the spiky gauntlets, flowing robes, bitchy invective and demonic pageantry. Such generalizations don't necessarily apply to all the bands on this bill. Brooklyn band Tombs is more avant-garde and extreme than black, and locals Darklord does very much their own thing, playing '70s-rooted classic metal in the vein of Pentagram and Witchcraft and playing up the devilish content, replete with a Baphomet mascot—a true trans god-and-goddess—prowling the stage. French outfit Hexenkreis actually sound the part, with shrieks, trebly riffs and blast beats—but their appearance is a mystery; information and imagery on the band is scanty online. So you might have to rely on actual drag performers Chelsea Siren and Opal Ascension for the fashion show. And that's fine. Because all this Toddlers & Tiaras and Miss Universe horseshit needs a shot in the tuck—how 'bout a Miss Pazuzu Annihilatrix? (RH) Metro Music Hall, 615 W. 100 South, 8 p.m., $10-$30, 21+, metromusichall.com