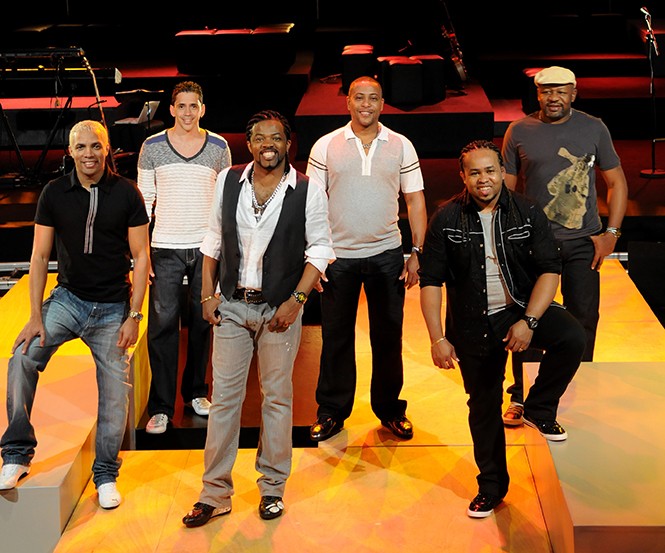 THURSDAY 6/7
Grupo Revelação, DJ Marlon
Samba is Brazil's version of American jazz and blues—a mishmash of art forms based on black culture that was adapted from rural roots and updated for the increasingly urban 20th century. When migrants from the northern Brazilian state of Bahia flooded into Rio de Janeiro, samba exploded in both popularity and stylistic nuance, spawning samba associations that soundtracked Brazil's thriving Carnival culture. Like jazz and blues in the United States, samba was originally derided as primitive and unworthy of critical acclaim. But wildly popular bands like Grupo Revelaçáo, which formed in Rio's Engenho Novo neighborhood of favelas in 1991, brought the irresistible rhythm to the masses, earning the quintet deals with international major labels like BMG and Universal Music and record sales north of 10 million units. So why is it so hard to find reliable information en Inglês about Grupo Revelaçáo on the internet? Even the band's translated Wikipedia page lists its members' names simply as David, Mauro Júnior, Rogerinho, Sérgio Rufino and Beto Lima. Playing the acoustic guitar, banjo, tantan and pandeiro while singing samba's signature impassioned vocal harmonies, Grupo Revelaçáo is the real deal—Brazilian music not for The Life Aquatic hipster crowd swooning over Seu Jorge's David Bowie covers, but instead Brazilian music for Brazilian audiences hungry for an authentic taste of home. As event organizers Brazucas Fest SLC claim, "This concert will be a turning point to the Brazilian event market in Utah." Get in on the ground floor and dance the night away. (Nick McGregor) The Complex, 536 W. 100 South, 8 p.m., $35, 21+, thecomplexslc.com

The Flaming Lips, B|_ank, Night Marcher
With a psychedelic sensibility planted somewhere between Sun Ra and Son Volt, The Flaming Lips have long been Oklahoma's best-known band, bequeathing the Sooner State with its own unlikely phenomenon. Led by the intrepid Wayne Coyne, the Lips' fame is mainlydueto their stunning mix of unceasingly compelling melodies, progressive posture and celebratory onstage presence.Both on record and in concert, the band teeters between the brilliant and the oblique, delivering strange lyrics and stranger song titles while Coyne regularly encases himself in a bubble that carries him over adoring crowds. It's an oddly insurgent attitude, buoyed by a dedicated fan base and a slew of critical kudos—among them three Grammy nods and a BRIT Award—accrued during the upward ascent of a 35-year career. Indeed, landmark albums such asClouds Taste Metallic(1995),The Soft Bulletin(1999) andYoshimi Battles the Pink Robots(2002) attest to The Flaming Lips' remarkable prowess. Even so, their penchant for unpredictability makes them hard to nail down; apart from the aforementioned references, elements of early Pink Floyd, Soft Machine and Robyn Hitchcock often enter the mix. They're certainly one-of-a-kind—weird, wonderful and never given to compromise or commercial considerations. No wonder, then, that The Flaming Lips continue to fire up a collective cheer, kicking off Ogden Twilight's 2018 summer series.(Lee Zimmerman) Ogden Amphitheater,343 E. 25th St.,5 p.m., $10 presale; $15 day of show; $50 VIP, 24tix.com

FRIDAY 6/8
The Atlas Moth, Mustard Gas and Roses, Heretic Temple, Pinewaller
No, not just any atlas moth—The Atlas Moth. Putting "the" in any title makes it, well, official. Otherwise, if you search "atlas moth," you'll end up with a giant confused moth that wants to be a butterfly (but don't we all?). Chicago's dream-sludge/post metalers The Atlas Moth (again, not the insect) continue to spread their wings and evolve their musicianship, making the band's moniker a perfect fit. Metalheads and extreme music devotees strive for new inspirational tunes to jam out to, and thankfully The Atlas Moth delivers a breath of fresh air for the underground crowd. They pay tribute to film noir and historical cults on their most recent album, the four-years-in-the-making Coma Noir, produced by the great Sanford Parker of Prosthetic Records. The band dances on the brink of darkness and spirituality, easily producing the most underrated metal album of the year thus far. Although Coma Noir reigned supreme on Billboard's Top New Artists and Current Hard Music Albums charts, the band has mainly served as co-headliners with bigger names in rock and metal. But 2018 is apparently the year of the moth, with The Atlas Moth delivering a gnarly lineup to the West Coast, teaming up with L.A. wasteland indie rockers Mustard Gas and Roses, who bring an avant-garde style to the stage in support of their 2016 album Becoming. So come for the moths and stay for the tunes. (Rachelle Fernandez) The Loading Dock, 445 S. 400 West, 6:30 p.m., $12, all ages, loadingdockslc.com

Zeds Dead, Bro Safari, Spag Heddy, Armnhmr, Shlump, Lick
If you dig electronic dance music, Salt Lake City is the place to be this weekend, when the second annual Deadbeats Tour rolls into The Great Saltair. EDM heavyweights Zeds Dead have rocketed to mainstream success during the past two years, translating their triumphant Toronto-based thump into worldwide exposure thanks to big hits like "Too Young," which features lyrics from both Weezer's Rivers Cuomo and trap superstar Pusha T. That hearkens back to Dylan Mamid and Zachary Rapp-Rovan's early days as insular cross-pollinators, mixing hip-hop, bass and alternative rock into a spooky, sumptuous EDM blend. But Zeds Dead possess far more than just an ear for hooks: The duo released it 2016 debut album Northern Lights on its own Deadbeats imprint, adapting the label to today's nonstop touring environment. The Deadbeats Tour presents a mini-festival in each city, patterning itself off the Mad Decent Block Party spearheaded by mega-producer Diplo (another Zeds Dead collaborator). Along with Zeds Dead, this stop features Bro Safari, Spag Heddy, Armnhmr, Shlump and Lick, along with interactive fan elements like the Deadbeats Arcade, live graffiti art, food trucks, merchandise pop-ups and more. How big of a deal is this tour? A month after this show, The Deadbeats ship heads to the fabled Red Rocks Amphitheatre in Colorado for two consecutive shows. (NM) The Great Saltair, 12408 West Saltair Drive, 8 p.m., $35, 18+, thesaltair.com

MONDAY 6/11
Dr. Dog, (Sandy) Alex G
For the past 15 years, Philadelphia's Dr. Dog has produced its own particular version of fuzzed-out, psychedelic-tinged indie rock. But now, in an effort to master subtle dynamics, they've eased into a softer, slower sound on their new album, Critical Equation, which allows more room for their unique instruments and voices. A live energy permeates the record, as well, due in part to working with producer/engineer Gus Seyffert in Los Angeles. With Seyffert helming the project, Dr. Dog was able to take a hands-off approach and focus on playing as an ensemble rather than wading deep into enginerering minutiae, which guitarist/vocalist Scott McMicken is famous for back in his Philadelphia studio. Seyffert also lent Critical Equation a rich pre-rock 'n' roll aesthetic that's more in line with Frank Sinatra and old-time cinema. For example, the third track on the album, "Buzzing in the Light," is a gorgeously rendered dreamscape over which co-vocalist Toby Leaman waxes poetic on the mysterious depths of the universe. It's a slow and spacious song, and also a good indication of Dr. Dog's new sound. How this new approach translates to the live setting is another matter, however. Dr. Dog's shows have always been louder, more expressive and generally more amped-up versions of their records, but you can expect the band's upcoming gig in SLC to be a lot less sweaty than on previous tours. That's because they've committed themselves to creating emotionally powerful but sonically chilled-out tunes. (Howard Hardee) The Depot, 13 N. 400 West, 8 p.m., $26 presale; $28 day of show, depotslc.com

TUESDAY 6/12
Thunder and Rain
Bluegrass bands from Colorado are a dime a dozen in these Americana-obsessed days. But Golden's Thunder and Rain present a different take on the age-old formula: mix trad grass, modern folk, classical chops and heaping helpings of pop, then watch as audiences connect on an emotional level. Originally formed when guitarist and vocalist Erinn Peet-Lukes moved from Brooklyn to the Rocky Mountains, Thunder and Rain coalesced over the next few years around the considerable talents of Ian Haegele (upright bass), Chris Herbst (dobro and lap steel), Dylan McCarthy (mandolin) and Natalie Padilla (fiddle). Last year's full-length Start Believing was written by Peet-Lukes and former band member RP Oates, but its high-gloss sheen should lead to greater success. Early reviews for Start Believing reference touchstones like Dixie Chicks and 10,000 Maniacs, which used roots in country and folk to catapult themselves to a more marketable echelon. Thunder and Rain are poised for a similar jump—if a band that spent two summers working on a dude ranch in Wyoming can put out a record this polished on their own, imagine what they could do with some major-label support? For now, Utahns can experience Thunder and Rain on their June tour, which kicks off with a stop in Rye Diner & Drinks' intimate listening-room environs. (NM) Rye Diner & Drinks, 239 S. 500 East, 6 p.m., $10, all ages, ryeslc.com